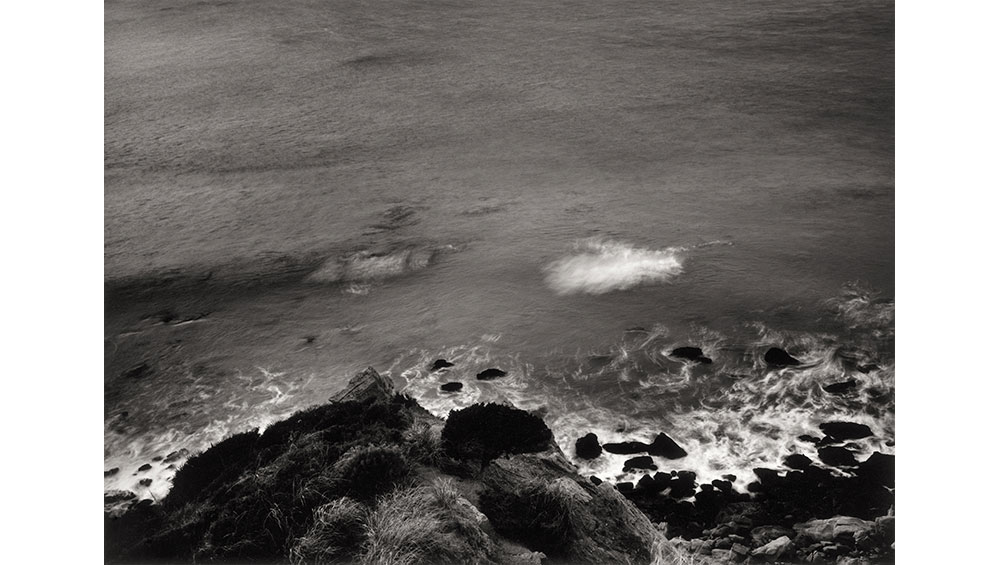 The images in this exhibition are vast. Together, as they are displayed here, they are overwhelming. Thomas Joshua Cooper (b1946) has photographed scenes from the edge of the world. He has travelled to the furthermost points of the Atlantic Ocean – north, south, east and west – and his large images pull us towards the infinite, the unfathomable. These pictures have no horizon and, as viewers, we experience something of the vertiginous edge of the world that Cooper journeyed to, the extreme and remote locations, some previously unknown. Cooper calls his project The World’s Edge – The Atlas of Emptiness and Extremity. This is the contemporary sublime. 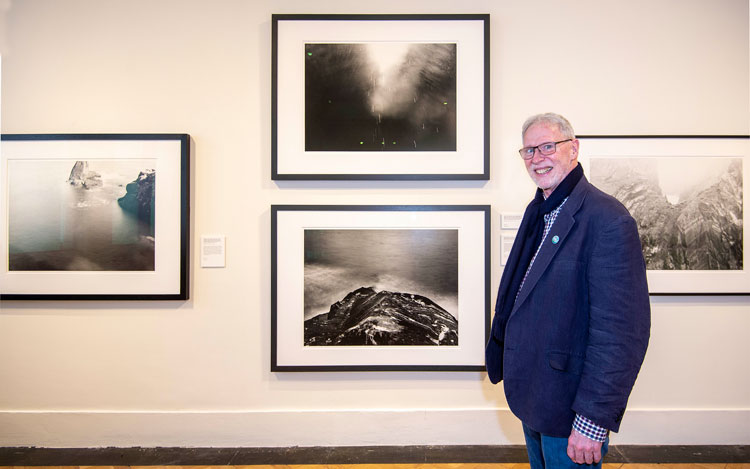 Cooper was born in the US but has lived in Glasgow for many years, founding the fine art photography department at Glasgow School of Art in 1982. This is the first time this body of work has been exhibited in Scotland, Cooper’s adopted homeland, and it pleases him immensely to see the results of a life-long project exhibited at the National Galleries of Scotland. For more than 30 years Cooper has travelled from his home in Glasgow to these extreme locations, out and back, out and back again. The 35 pictures presented here span locations across Europe, Africa, north America, south America and Antarctica. 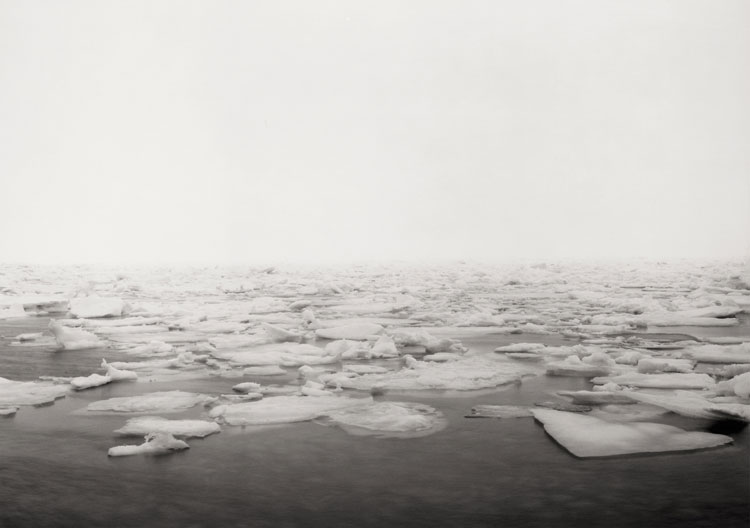 Cooper uses a large format camera dating from 1898 and makes just a single exposure at each location. After each episode of his journey, he returns to Glasgow, developing and printing the negative by hand. The photographs focus entirely on elemental features – sea, sand, rocks and ice, for instance. They never include the human figure and yet they invoke something of the human spirit and invite fundamental questions about the human condition. That is why, I suppose, it makes sense to exhibit landscape photographs in a portrait gallery. Ultimately, they are an oblique portrait of humanity. This makes more sense when we consider that Cooper’s explorations of remote and extreme geographies are not solely artistic but also physical. The dangerous journeys he makes are sometime life-threatening, especially for a photographer who cannot swim and is at times dependent on a survival suit to enter icy waters to capture the image he desires. At the far reaches of the world, where uncharted dangers exist, Cooper places himself in isolated and unknown landscapes to record them, bring them back and share them more widely. He is the only artist to have taken photographs at the two poles and both polar circles. He says: “It’s important to me that people, when looking at my images, can understand that I stood in those places, I looked out from those edges, and that where I stood, they, you or any of us, could also stand and look if they wanted to.” 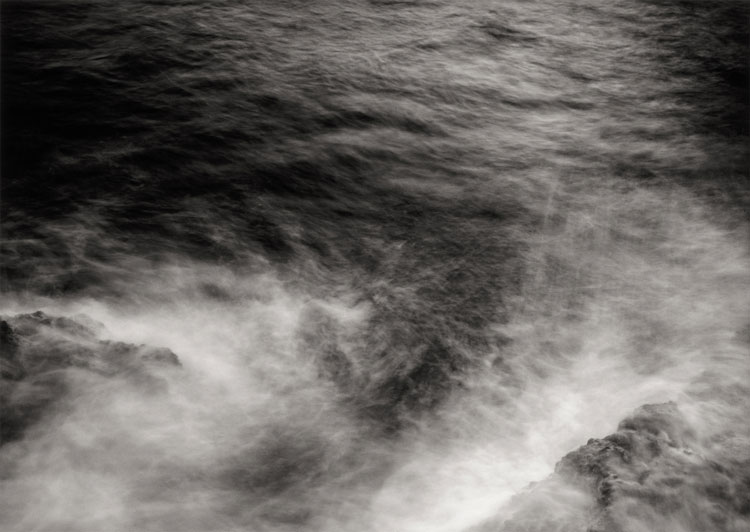 In one sense, Cooper’s project is a very personal challenge, and its results, these iconic black and white images, portray something of his personal strength and determination to achieve his goal. He was originally inspired by historical explorers such as Ferdinand Magellan and Francis Drake, both of whom circumnavigated the globe in the 16th century. Cooper visits historically significant spots not to retrace the steps of those who went before him, but to stand in those places: “I wanted to imagine what had happened in these spaces in both physical and emotional terms.” Cooper’s project was to travel to and record the extreme points of the Atlantic Basin. He did this without any significant support, just a small number of guides and pilots, and his analogue camera.

In another sense, Cooper’s project might be considered as environmental activism, although that was never what he set out to do. We are told that every one of the cardinal points he has photographed over the last 30 years will be submerged under water within the next 35 years because of the climate crisis. Some of these points are still uncharted, and these large-scale analogue images remind us of the unknown edges of the Earth, the power of nature over mankind in such places and, conversely, the destructive role of mankind in climate change and the power to eradicate such wonderous locations. In Cooper’s images, we are faced with our own mortality and, perhaps, the potential demise of the entire human race if climate change is not soon taken more seriously. The scale of the project becomes apparent when we learn that Cooper’s journey was initially planned to take seven years. It has instead taken 32 years and resulted in more than 700 photographs. We see only 35 of those photographs in this exhibition but that is more than enough.

I found this exhibition emotionally overwhelming. The locations that Cooper photographed are unbearably beautiful and heartbreakingly fragile. The scale of the photographs is immersive, especially when hung together in proximity, and the lack of horizon on which to fix our gaze makes for a dizzying experience. Gazing into the void, as it were, there is silence, solitude and stillness. There is illumination, too, if we are open to it. Illumination of thought and idea, a reflection on the human condition perhaps.

One of the added pleasures of this exhibition is the newly commissioned music written in response to the photographic images and available on the gallery’s website. Composed by Andrew Wasylyk, the pseudonym of the Scottish writer, producer and instrumentalist Andrew Mitchell, the three short compositions – The Life of Time, Hearing the Water Before Seeing the Falls, and Truant in Gossamer – echo and convey wide open spaces, impossibly harsh landscapes and freezing cold bodies of water. The Life of Time is especially poignant as it features Cooper’s voice. With such a wonderful soundtrack and a safe gallery interior, we might be forgiven for not fully appreciating what Cooper experienced to bring these images back. Astute descriptions of each image and its context ensures we do not forget. For instance, Cooper’s experience of a polar storm that shut down his camp for 23 days resulted in a single exposure of the whiteout conditions. We are told that it took seven people to assist him in achieving this: three to hold the tripod in place, three more to support the camera on the tripod, and one to hold Cooper. These were extreme conditions. So, enjoy these images for what they are. Beautiful, vast, rare and rarely seen by anyone except those willing to risk everything to bring them back for the rest of us. I felt genuinely privileged to be able to see them.