They Called Me Mayer July: Painted Memories of a Jewish Childhood in Poland Before the Holocaust

They Called Me Mayer July: Painted Memories of a Jewish Childhood in Poland Before the Holocaust
The Jewish Museum, New York City
10 May–1 October 2009

'The places I remember exist no more. They are only in my head, and if I die they will disappear with me. I paint these scenes as I remember them as a little boy looking through the window'. 1

According to Mayer Kirshenblatt, the Polish town that he knew by its Yiddish name, Apt (called Opatów in Polish), was like many other towns in Poland. After meeting with some of the idiosyncratic characters described in Kirshenblatt's paintings and his lively written accounts, visitors to an exhibit of the artist's work now displayed at the Jewish Museum in New York City will find it difficult to believe that such people existed anywhere else.2 From flour porter Laybl Tule and the 'human fly' who scaled the corner of one of the largest buildings in town to the hunchback (and pregnant) bride standing under a wedding canopy and a prostitute displaying her wares in the marketplace, Mayer's portraits will become for all who see them iconic of Apt prior to World War II. In effect, as Kirshenblatt noted, Apt stands for all of small-town Poland at this time.

At least some of Kirshenblatt's friends and neighbors were one-of-a-kind eccentrics, but the routines and rituals they kept are as true to time and place as Swedish painter Carl Larsson's (1853-1919) illustrations of his home and family in Sweden, primitive artist Grandma Moses's (Anna Mary Robertson, 1860-1961) paintings of rural life in upstate New York, and painter/illustrator Norman Rockwell's (1894-1978) rendering of mid-century American lifestyle and values. The difference between Kirshenblatt and these artists is that his paintings and stories are elements of performance. Clearly not autobiography nor social commentary, Kirshenblatt's work is a recreation of daily life as it was lived and observed by him before he left Apt in 1934, at the age of 17, for Canada.

Although Kirshenblatt dated many of his paintings 1934, he began working with his daughter, Barbara Kirshenblatt-Gimblett, on this memory project decades later when he was well into his seventies. The Apt that he knew ceased to exist after Hitler invaded Poland. Like the few survivors of concentration camps and those who left Poland before the war, Kirshenblatt is a last remaining link to a vibrant culture abruptly obliterated. They remember a time when, before Yom Kippur, people transferred their sins to a chicken by swinging it over their heads; a drummer served as town crier and postman; acrobats and gypsies performed in the streets; and everyone had a nickname. In Kirshenblatt's lively accounts, these nicknames are humorous, rarely complementary and never spoken directly to the victim. His own moniker, 'Crazy Mayer,' (Mayer tamez) comes from the Yiddish word for 'July' and refers to a month when high temperatures make people excitable.

Kirshenblatt's gift to his own and succeeding generations may never have surfaced if not for the persistence of his wife and daughter. Kirshenblatt moved to Canada with his mother and three brothers to join his father, who had emigrated six years earlier. Eventually, he married and opened his own paint and wallpaper store. A busy man with little time to pursue his own interests (including a childhood fascination with the way objects work), he put off his daughter's requests. In her afterword to the 411-page book they co-authored, They Called Me Mayer July: Painted Memories of a Jewish Childhood in Poland Before the Holocaust, published in 2007, Barbara says that her father kept silent about his past.3 In the late 1960s, while pursuing an interest in folklore that would provide her future career, Barbara realized the potential in oral history for capturing all-but-lost treasures of popular culture.4 Then in 1975, Kirshenblatt became seriously ill. At age 59, he sold his business and retired. Used to constant physical work, he became depressed and in need of an occupation to productively fill his time. He collected clocks and repaired and refinished antique furniture, which his wife sold at auction, but after three years he still had not found a calling. As a child he had drawn sketches of his observations as he traveled through Apt, and in the 1960s he had taken an adult education art class. Later still, Barbara's husband, Max Gimblett, gave Kirshenblatt paper, paints, brushes and an easel, and Kirshenblatt's wife registered him for another art class. Kirshenblatt admits that formal education was never his chosen method. In his book, he says that '... it is my fate that almost everything in my life I had to learn by myself, including how to paint'. Life was, and continues to be, Kirshenblatt's school.

Viewing the more than 80 paintings in the exhibit, visitors will recognize Kirshenblatt's physical energy and intellectual curiosity, as a child and aging artist. Among the first Jewish boys to attend compulsory education at the Polish school in Apt, Kirshenblatt also attended a religious school and was active in one of the local Zionist organizations, which his mother helped to found. He admits in his book that he had little time to play or watch Apt's Jews perform their daily secular and religious rituals. Yet he seems to have been everywhere and seen just about everything. In fact, he had to repeat a year at the Polish school because he spent much of it out observing the residents; in many of his paintings, he appears in traditional blue schoolboy uniform and cap. The depth of his observations is astounding; in both word and picture (Mayer's written recollections provide exhibition wall text) he describes intricate details of how people did things; for example, cooking such delicacies as calf's-foot jelly; inflating calves' bladders for use by Christian butchers in headcheese; making ropes and hawsers on a spinning wheel in an alleyway; and transporting water from the river to put out a fire, this last an exhausting feat involving a motorized pump (that rarely worked), two-wheeled carriages drawn by horses (of which there were never enough), and numerous buckets (which the fire brigade and volunteers ended up carrying by hand from the river to the fire). Kirshenblatt's grasp of mechanics is evident in the pencilled map of Apt that appears in his book and his drawings for making wooden toys, a dreydl, a brush and musical instruments. Those so inclined will discover that, in very little time, it is possible to construct a sturdy and tuneful tin whistle from a soda can by following Kirshenblatt's instructions. Helping to locate viewers as they travel through Apt via Kirshenblatt's paintings, the map helps to simulate Barbara's experience of learning the town, vicariously walking through it, as she heard her father's stories.

Stylistically, Kirshenblatt's drawings and acrylic paintings fall into the categories of folk and outsider art. His mastery, his gift and his art is storytelling in the tradition of the great raconteurs. With humor, suspense and the grisliest of details, the artist captures his audience, appealing to the child inside who relished detective stories, superhero comics and afternoon matinees. Apparently, thieves and scoundrels of all kinds, even a laundry mafia and murderers, were common in Apt; the most benign being a wealthy woman who stole fish at the market by slipping it down her bosom. As a Jew, Kirshenblatt focuses on the centers of Jewish life: houses of prayer and study, synagogue and Jewish cemetery, and Jewish occupations and trades people (millers, bakers, butchers, shoemakers, etc.). But little escaped his eye, and his paintings also show the daily activities of Gentiles, with whom he associated although he says that few of his Jewish friends did.

As a child Kirshenblatt seems to have been quite sensitive to class and religious distinctions. Frequently in his book, he remarks on sections of town that are 'better' than others: the north side of the square, the upper end of the Jewish street. His stories also touch on the hardscrabble existence of many Apt residents, who supported themselves at a minimal level by whatever means came to hand. For instance, he says that men who did not work spent much of their days, particularly in winter, in houses of study that were either kept warm or had windows through which the sun would shine to impart some comfort. He describes wealthy residents in terms of what they own, where they live and the comparative luxury of their homes.

Special features of the exhibit round out a thoroughly enjoyable and moving experience of pre-World War II Poland: a video of Kirshenblatt and his daughter as they stroll through Apt on one of their visits; a toy theater created by New York City-based puppet company Great Small Works, The Boy in the White Pajamas, based on Kirshenblatt's painting of a boy whose parents, according to tradition, dressed their son in white pajamas to fool the angel of death; and a closing section with photographs of Apt during the early twentieth century and a portrait of Kirshenblatt's parents, circa 1915. Visitors are invited to take cards from a stack provided on a table, record their own memories and/or responses to the exhibit and attach them to a wall. The many cards so displayed are poignant reminders of the treasures of memory that must be expressed to be preserved.

For many years, Mayer Kirshenblatt resisted his memories. When his daughter travelled to Poland in the early 1980s, he refused to accompany her. His first visit, nearly ten years later, left him with a heavy heart: 'The visit made me very sad, literally ill. After five hundred years of Jewish habitation in Apt, there was not a single sign that Jews had ever lived there. I wanted to leave immediately', he says. Subsequently, on a second visit to Poland he connected with people who remembered places he had known and loved. These people and those living in Canada and America with roots in Apt have helped Kirshenblatt preserve his fondest memories of his childhood, to paint the expulsion of the Jews from Apt and the murder of many family members, and to exhibit his work in Opatów for those now living there, which completes the story. Without this coda, Kirshenblatt's paintings might seem as dreamy as a vision created by his favorite painter, Marc Chagall. With it, we have history.

1. They Called Me Mayer July: Painted Memories of a Jewish Childhood in Poland Before the Holocaust by Mayer Kirshenblatt and Barbara Kirshenblatt-Gimblett. (University of California Press/Judah L. Magnes Museum, 2007), p.5

2. They Called Me Mayer July opened at the Jewish Museum in New York City on 10 May 2009 and closes on 1 October. Organized by the Judah L. Magnes Museum in Berkeley, California, in association with the Museum of Craft and Folk Art in San Francisco and the Holocaust Center of Northern California, where it was displayed from 10 September 2007 to 13 January 2008, the exhibition travels from the Jewish Museum in New York to Joods Historisch Museum in Amsterdam in late 2009 and the Museum of the History of Polish Jews in Warsaw in 2011.

3. The hardcover book contains 196 color reproductions and 11 black-and-white drawings, Kirshenblatt's hand-drawn map of Apt, a section on languages spoken in Apt (Yiddish, Hebrew and Polish) and locations to which Kirshenblatt refers, a complete list of illustrations and an index.

4. Barbara Kirshenblatt-Gimblett is university professor and professor of performance studies at New York University; author of Destination Culture: Tourism, Museums and Heritage and Image Before My Eyes: A Photographic History of Jewish Life in Poland Before the Holocaust (with the late Lucjan Dobroszycki); and co-editor of Art from Start to Finish and The Art of Being Jewish in Modern Times. 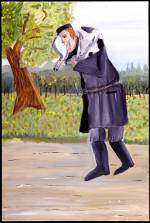