The Wisdom of Birds shows the work of three artists for whom the imagery and significance of birds has played an important role in their artistic careers.

The introduction by Damien Smith cites the perfectly beautiful rock art depiction in southwest Arnhem Land of the now extinct Genyornis, an emu like creature that died out over 40,000 years ago. The ancient image alludes to the mysterious aspect of bird-life, a field of study that has fascinated artists from Albrecht Durer to Leonardo. Scientific illustrations that depicted the strange and marvelous creatures in the New World exquisitely rendered to fascinate a captive audience in Europe expanded greatly in the 18th century. In the 21st century the threat of extinction draws us to find the rare and vulnerable symbolic of human intervention and the increased threat to the environment. Regrettably many responses come after natural catastrophes have destroyed human environments, making the reflection something of “too little too late”. Writing at present about contemporary Chinese painting, it is fascinating to see the way different cultures proclaim the fear of loss, to personal identity, to a spiritual dimension to life and to animal and bird habitats. The artistic depiction of birds then, in the present climate is never just one of observation or depiction, “However lovely that innocent state might seem the subject of birds is burdened by as complex a cultural legacy as any topic could be”.

Judy Holding’s work in a wide range of materials (paper silhouettes, bronze sculptures, laser cut steel) has evolved from time spent in the remote parts of the Northern Territory of Australia, and in Nepal. She explains: “I am attracted to birds by their energy and perfect ergonomic shape. They need no decoration but are instantly recognizable by their outline. I try to use these shapes to build a positive/negative energy across the picture plane whether it is collaged paper, watercolour or laser cut metal.”

Martin King is well known in Australia as a master printer at the Australian Print Workshop with wide experience working with leading artists there and in many Aboriginal communities around the country. His bird images are solitary, elegant and melancholic: “I am always making note of birds that I see in locations I travel to – Antarctica, Gippsland, Wimmera, the Kimberley, Northern Territory or NSW coast, observing birds is a way of immersing myself in particular environment, spending hours walking or just meandering through the landscape, concentrating on sounds and movements in the trees and on the ground. The landscape comes alive in a way that is different from just a cursory passing or casual observation and for me it defines the location in a very particular way, like looking into a part of the landscape with more precision.”

With references to a plethora of historical, etymological and other naturalistic imagery, Heather Shimmen’s linocuts and mixed media works that respond to the intangible mystery of birds. She brings the duality of their existence in to focus: their fragility in spite of their remarkable endurance, and their symbolism in different cultures. The fact that birds have inhabited the earth for over 150 million years and that humans came to self- awareness surrounded by then is a salutary message with which to address environmental issues as a matter of urgency, and to acknowledge the rich mythology that surrounds our feathered co-habitants. 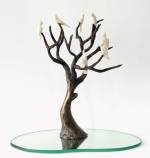 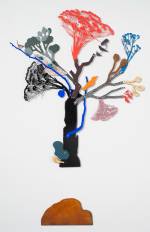 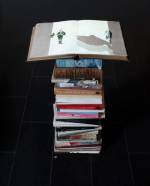