Though perhaps not as well known as Ireland for producing hordes of young artists and rebels intent on leaving their homeland in search of adventure and success, Scotland has a similar tradition of inspiring departure.

The Scottish Colourists, a group of painters who left their homes and families in the early-20th century to find inspiration, mainly in France, are some of the most notable of this sprawling group. The Scottish National Gallery of Modern Art in Edinburgh is hosting a series of retrospectives of the Colourists, and the work of John Duncan Fergusson (1874-1961) is exhibited there until the summer, following retrospectives of Francis Campbell Boileau Cadell (1883-1937), George Leslie Hunter (1877-1931) and Samuel John Peploe (1871-1935).

One of the most adventurous of his group of émigrés, JD Fergusson was born in Leith – not far from the gallery where he is now on show – a place probably more famous for being the setting of Trainspotting than for its artistic community, past or present. With Fergusson’s retrospective opening in December, merely the experience of walking to the exhibition in one of the bleakest months helps to explain the artist’s attraction to colour and flamboyance. There is nothing like a childhood and adolescence spent in seemingly impenetrable greyness to inspire escape, and a persistent, life-long desire for something more colourful. Combined with the steely determination that enduring years of harsh weather gives rise to, the sustained dedication of the Scottish Colourists, and Fergusson especially, makes sense.

“To go to Paris was the natural thing for the Scot,” said Fergusson. “It doesn’t seem to have occurred to the modern Scot that the Scottish Celt when in France was among his own people, the French Celts. French culture was founded by the Celts and … if Scotland or Celtic Scotland could make a ‘new alliance’ with France, not a political union like the ‘Auld Alliance’ but cultural, it would perhaps put Scotland back on to the track of her culture, and see the Scots do something Scottish instead of imitating the English or rather second-rate British.”1

Moving to Paris in 1907, Fergusson absorbed French culture and its innovative styles of painting, which revolved around a love of light and its colourful effects. Perhaps more so than the other Scottish painters in Paris, he became assimilated into life and art there, and came to be known as the more bohemian of the émigrés, as well as the most vivacious, considered as “the leader of the English-speaking artistic community”.2 Rather than simply becoming French, however, Fergusson’s move to Paris was ultimately a way of being Scottish, and understanding his Scottish identity. Perhaps one cannot appreciate the subtleties and possibilities of a grey and blue palette, without immersing oneself in the giddy colours of the “other Celts”. Certainly for Fergusson, living in France not only realised dreams of colour and light, but led to a fuller understanding of Scotland, and its more muted palette.

The exhibition of more than 100 paintings, sculptures, and works on paper expresses a real vitality and sense of victory – a feeling that this exploration and adventure were successful and productive. Though some of the images of coffee-houses and nocturnal celebrations may now seem overly familiar, given the popularity of those subjects with their French contemporaries, to see them in the context of Edinburgh, and Fergusson’s early paintings of Scotland, is to glimpse the wider narrative and depth of the scenes shown. It is also clear that, for Fergusson, the attraction of Paris, and of travel, was not simply about colour, or exploring techniques used by French artists; it was about people. The canvases he painted in Paris are full of lively figures – dressmakers, dancers, artists and drunks – milling around coffee houses and bars, reclining on park benches, or kneeling on exotic carpets amid flowers, in a city enchanting and alive. These paintings express love and delight through colour and light, not simply with it. These glamorous women and beautiful dancers, these relaxed, sunlit bodies, required some travelling to find.

Compared to the rugged hills of Scotland and the gloomy Forth, where any people seem to vanish in the presence of such a domineering nature, or the shipyards of Glasgow, where ships sink slowly (Damaged Destroyer, 1918), Paris gave Fergusson crowds of new faces, fashions and bodies, which are celebrated in so many of his works. Les Eus (1910-13), an impressive, well-constructed and vivacious painting, depicts nude couples dancing in a frame of green foliage. Fergusson was probably inspired by Les Ballet Russes and other dance companies in Paris at the time, and, of course, by his wife, Margaret Morris (1891-1980), a dancer and choreographer originally from London, whose techniques and ideas about ballet, and the dancers who attended her summer schools, influenced his work. Paintings such as Etude de Rhythm (1910), Seated Nude Among Trees (1928)and Bathers: The Parasol (1951) continue to show his fascination with the female form, as well as the influence of Matisse and Picasso, and his Parisian contemporaries.

The presence of dance and fashion in his paintings is perhaps what gives Fergusson’s work an adventurous, daring quality that the other Scottish Colourists do not exhibit so obviously, and it is these scenes – these dances captured in paint and light – that linger. Fergusson was a Scot and a Colourist, but he was also in love with dance, and a dancer, and it was this aspect of his life in Paris that remains most intriguing and original. The exhibition reveals these aspects, subtly pointing out moments of success and innovation in Fergusson’s painting, and downplaying criticisms of repetition or blandness, or even, too much colour. In showing careful portraits alongside carnal dances, and reminding us of his landscapes and shipyards, in addition to his well-known Parisian cafe scenes, the exhibition hints at a more complex painter, and a more interesting body of work, than is often assumed. 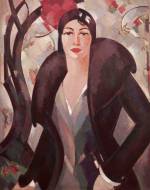 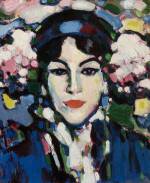 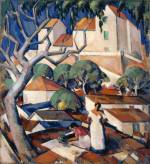