The Power of Intention: Reinventing the (Prayer) Wheel

The Power of Intention: Reinventing the (Prayer) Wheel

The exhibition is not only a visual and intellectual tour de force, but also offers spiritual fulfilment, immersing the viewer in an atmosphere of exploration of ancient Buddhist concepts and practices as seen through contemporary art

Alexandra Dementieva, Breathless, 2012. Interactive light object with production by Cyland MediaLab, VGC (Vlaamse Gemeenschapscomissie) (BE), and Adem vzw (BE), support from iMAL asbl/vzw and Flemish Ministry of Culture, programming and engineering by Aleksey Grachev and Sergey Komarov, and breath detector/Interface-Z construction by Peter Maschke; courtesy of the artist.

New York is not a city with a scarcity of art on which to feast the eyes and engage the mind. It is rare, however, to find an exhibition that is not only a visual and intellectual tour de force, but also offers spiritual fulfilment. The Rubin Museum’s splendid The Power of Intention: Reinventing the (Prayer) Wheel provides such an opportunity. Organised by Elena Pakhoutova, the curator of Himalayan art at the museum, the exhibition immerses the viewer in an atmosphere of exploration of ancient Buddhist concepts and practices as seen through contemporary art. 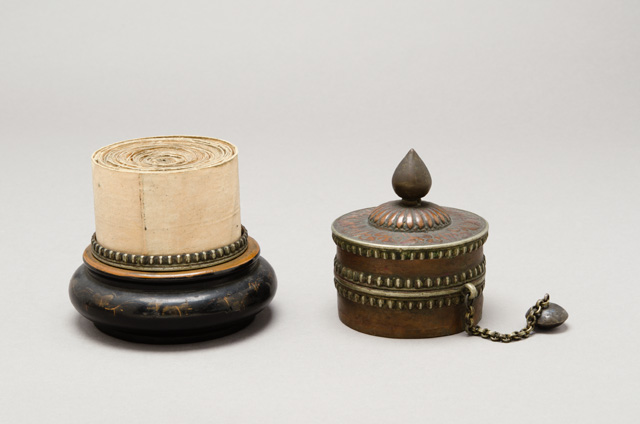 The title of the exhibition captures its main idea: how to gain a sense of agency and empowerment by wanting to do something good through our intentions; how to transform life through art. According to the curator, the process of elaborating this concept included the momentous decision “to use the prayer wheels as a metaphor through which to explore the power of thought and specifically intention”.

Prayer wheels are objects of everyday, habitual worship. They originated in the Tibetan Buddhist tradition to create positive karma and accumulate spiritual merit. The exhibition contains a great variety of these prayer wheels, from tiny hand-held ones to rather large constructions, but they all consist of a metal drum that can be rotated by applying physical effort from the outside, and a tightly wound ring of paper with written mantras located inside the drum. The idea is that by rotating the drum and reciting the mantras, positive energy and intentions contained in those invocations are spread around the world.

The exhibition is invigorated by five contemporary artists whose works embrace the possibility of interaction, participation and engagement – the notions linked with intentions encoded in ancient mantras. Accordingly, the display is divided into five parts, each matched with a work by a specific artist. In the section dedicated to The Power of Intention and Commitment, for instance, we see two paper collages by Youdhisthir Maharjan (b1984), from Nepal. The wall label tells us: “In Buddhist culture, commitment is an integral part of an intention” because it “empowers a person to carry out their intention into action, however big or small”. 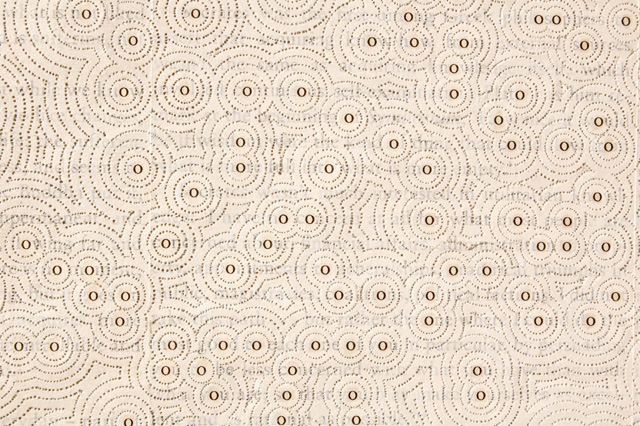 Maharjan’s work certainly testifies to his personal power of meditation and commitment. The artist’s materials are books found in secondhand bookshops, from which he cuts out text, incorporating it into his work through a painstakingly laborious procedure. Committed to Becoming is the title of his collage on display, as well as the title of the book from which the work was made. Here, we can read the text, which at first glance appears seamless, but on a closer look reveals that every single letter of the text is cut out and glued to the page in a predetermined shape. The composition is organised around the letter “o”, which stands for zero or nothingness, a concept in Hindu and Buddhist philosophy known as sunyata, which relates to the illusory notion of inherent existence.

Power of Thought, another work by Maharjan in this section, is also made from a book with the same title and also foregrounds the letter “o”. Here, the artist has whited out all other letters and connected the “o”s by thin paper strips, making the collage look like a spider’s web. The artist described it as referencing “the fragility of our faith and our intentions. We can very easily become distracted, tempted to do something else. Having a wish does not do much; you have to have a will as well.”1 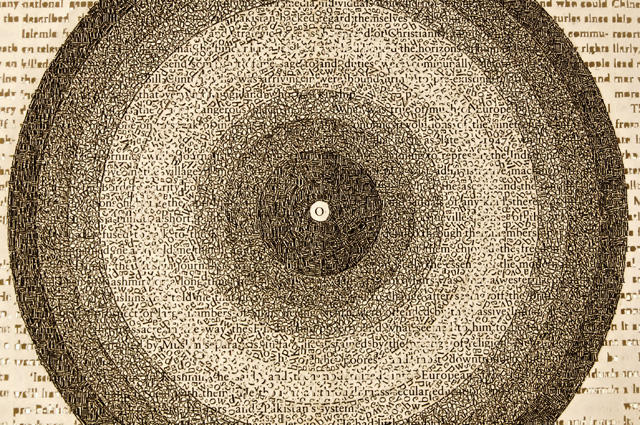 The section entitled The Power of Belief contains Landscape of Belief (2012), an installation by the Colombian-born artist Monika Bravo. Bravo (b1964) uses animation to project the ever-changing outlines of seven famous cities on three parallel pieces of glass. The projected lines are composed of letters, which at first is hardly noticeable, as they appear and disappear quite abruptly, blending with images of sparrows roaming over and descending on to the streets. Ostensibly, the work was inspired by Italo Calvino’s novel Invisible Cities, in which the Italian explorer Marco Polo describes to the Chinese emperor Kublai Khan the cities he visited during his travels. 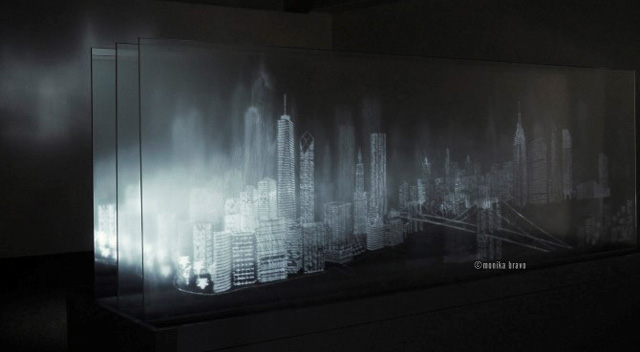 The projected images, then, can be taken as a metaphor for Khan’s imagination, which is trying to conjure up the images of the cities that he will never have a chance to see. In the interview with the curator, Bravo revealed that this work has a personal meaning for her: she made it at a difficult moment in her life to maintain belief in herself as a powerful artist.

According to Bravo, the most important aspect of the work for her is “a little lapse of two seconds” that separates the continuous projections of the cityscapes. She described it as “this moment where there is nothing … when your mind is open and you allow anything to come through. Things like architecture or literature restrict you, draw you along. You are not yourself really; they define you, and you lose yourself in there, and when you lose yourself, you are not aware and are reactive. Those seconds when there is nothing, the moment when we can still our mind and we are open, that’s when we become aware, and when we are aware, we can make an intention that is so strong it actually happens. It becomes magical because it is so strong.”2

Along Bravo’s mesmerising installation, the curator showed a reverse of a 16th-century thangka painting with lines of text representing a stupa – a place for meditation, symbolically representing Buddha’s mind and his enlightened body. Like Bravo’s piece, this ancient work is a depiction of a building made of text. Like real cities referenced by Bravo, stupas are also existing structures, still being constructed all over the world. 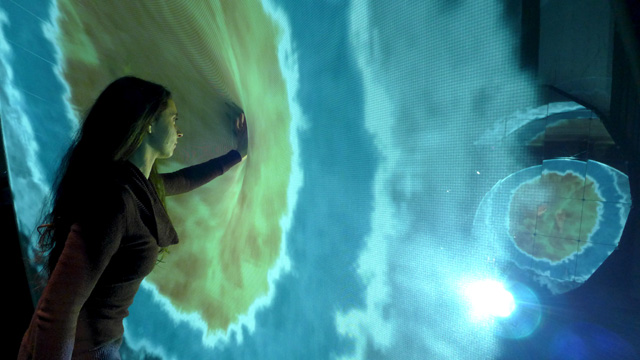 An interactive installation, Metamorphy (2014), by the French duo Scenocosme – Grégory Lasserre (b1976) and Anaïs met den Ancxt (b1981) – demonstrates the concept of Activation, which is necessary to set the prayer wheel in motion. Metamorphy is a gigantic oval membrane that is activated by touch. As soon as outward pressure – by hands – is applied to its dark surface, it comes alive with colour, light and sound. It is one of most popular works in the exhibition, as people line up to experience the transformative power of their own touch.

Scenocosme as a collective employs technology to heighten our relationships with each other and with various elements in nature. According to the curator, in Metamorphy, the artists endeavour to create a new environment every time the work is touched. In her view, it is comparable to creating your own mandala, which in Buddhism is a world you create yourself through meditation. In line with this thought, the curator placed a mandala of the Four-Armed Avalokiteshvara, a Buddhist deity of compassion, in close proximity to Metamorphy. In the image, which resembles an architectural floor plan, the deity is represented sitting inside a world that he created. Next to it, she placed the same form of deity, but sculpted in silver with a bronze finish. 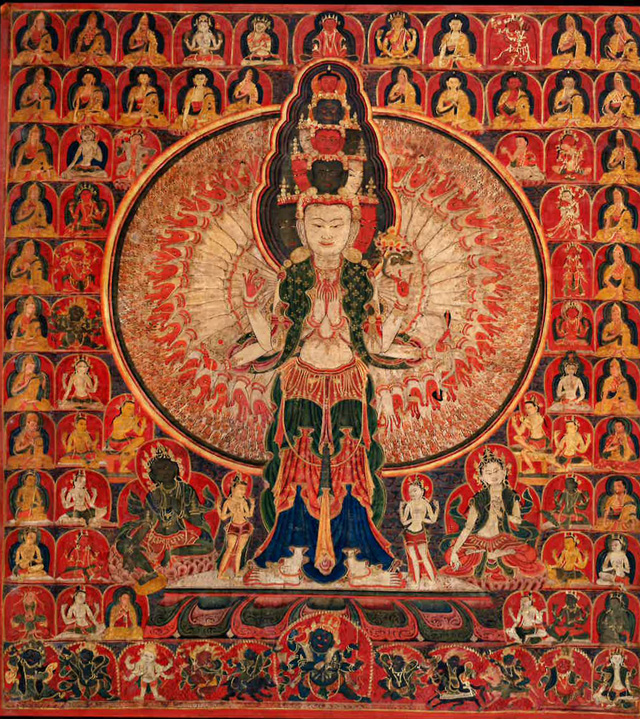 Breathless (2012), by the Russian artist Alexandra Dementieva (b1960), is an installation linked to the Buddhist notion of “cumulative power”, which holds that “accumulation of mantras, prayers and thoughts powered by positive intentions brings forth positive actions”. Dementieva’s installation consists of two interactive booths constructed of LED-lit structures that are connected to internet-based newsfeeds from about 50 online newspapers and magazines. The computer program is asked to search for words related to notions of power and intention. If the computer finds such words, the tubes light up – cumulatively, according to the number of words found by the computer: more words, more lit LEDs. The words appear on an electronic tableau above the booth. People file into the booths one by one, blowing into an anemometer (a device for measuring wind speed), with which each booth is equipped. With each blow, they create an interference with the electronic signals and momentarily interrupt the transmission of words on to the tableau. Within the context of this exhibition, Dementieva’s installation demonstrates that individual actions as simple as breathing can cumulatively affect our environment. 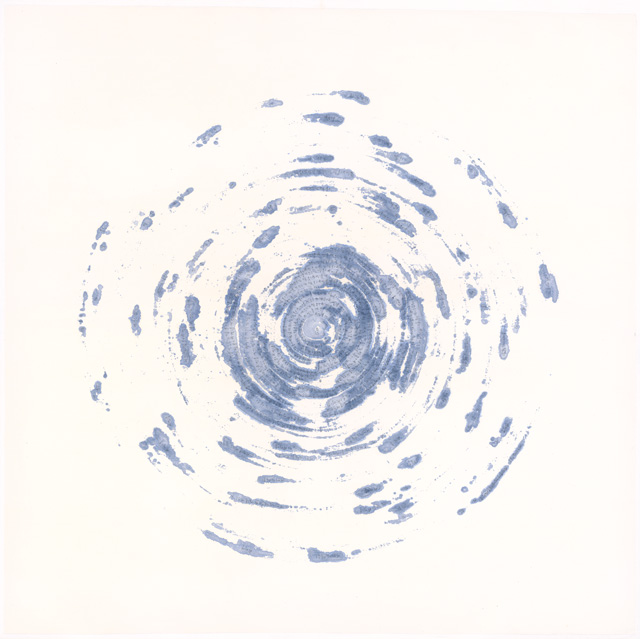 The concluding section on The Power of Repetition and Release houses the work of Charwei Tsai (b1980), an artist from Taiwan who is also a practicing Buddhist. Her large drawing Supplication (2019) contains the actual mantra of Padmasambhava, a famous Indian master of tantra who came to Tibet in the late eighth century to establish Buddhism. The mantra is written in concentric circles, gradually expanding from the centre toward the edges of the drawing, its expansion symbolically representing dissemination of mantras around the world.

Tsai’s second work, Spiral Incense (2019), comes closer to crossing the border from the symbolic to the literal release of mantras. The work consists of two inch-thick spirals hung from the ceiling in the shape of cones. The giant spirals were made in Taiwan of tightly woven paper that emits the smell of incense when burned. In temples, such incense spirals are also hung from the ceilings, where it takes several weeks for them to burn. Tsai painted them in indigo and wrote Padmasambhava’s mantra on the paper in silver ink multiple times, intending to release it into the air along with incense. Because such burning is not allowed in the museum, the work will be disassembled at the end of the exhibition, and anyone who signs up will be able to get a piece of it in the form of an incense stick. 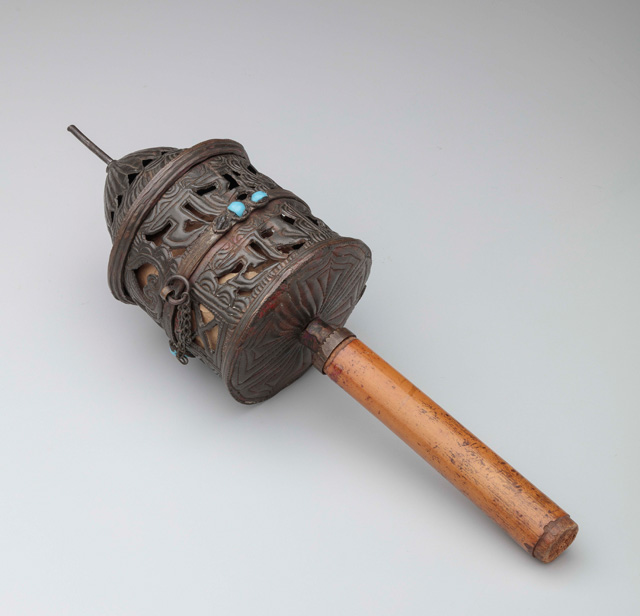 The exhibition is a strong introduction to the Rubin Museum’s year-long, institution-wide thematic exploration entitled Power: Within and Between Us – which also includes talks, programmes and related events. It is impressive in its ambition to bridge in thought, past and present, religion and art, intention and action, elementary and advanced technologies. This ambition is brilliantly conveyed by The Wheel of Intention, a design interface that allows visitors to type their intentions on a surface that resembles a prayer wheel, then turn it and watch the intention appear projected on the underside of the spiral staircase moving up to the museum’s dome.

The exhibition captures our imagination and feeds our optimism about the realisation of our dreams. It is heartening to have this tribute to the union of imagination and creativity, which gives us hope that this power is indeed “within and between us”, belonging to all of us individually and collectively. 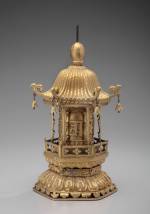 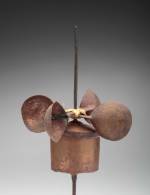 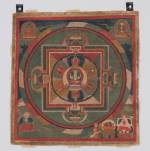