The Making of an “It” Girl

The Making of an “It” Girl

The lucrative relationship between celebrity and commerce is assumed in an age of branding and image. Today, names and faces of the rich and famous or almost-famous are used to sell commodities ranging from high-end couture and cars to beverages and cleaning products. A new show at Bard Graduate Center in New York City, Staging Fashion, explores the roots of a very specific influence – the actress on fashion at every level of society in France, England and America between 1880 and 1920 – and serves to illuminate our current obsession with 21st-century “It” Girls, their wardrobes and their lifestyles.

As originally used by Rudyard Kipling in his 1904 short story Mrs. Bathurst, “It” connoted an elusive quality that made a woman desirable; a sex appeal that was deeper and more extensive than that term generally conveys. Novelist Elinor Glyn, sister to couturier Lucile (1863–1935), who to a large extent helped make the reputations of actresses in her day, wrote about the quality in a 1927 story. Titled It, Glyn’s work was dramatised in a highly successful 1927 Paramount film starring the quintessential “It” Girl Clara Bow.1

But decades before Bow exuded the essence of “It,” actresses had become fashion arbiters and expanded their range to cosmetics and perfumes. In some cases, certainly for the three actresses highlighted at Bard – Jane Hading (1859–1941), Lily Elsie (1886–1962) and Billie Burke (1884–1970) – actresses were models of middle-class propriety, accessible elegance and feminine beauty.

Their elevation to respected artists involved a sea change in the view of actresses, particularly in France, that occurred during the nineteenth century. In his Staging Fashion catalogue essay, Professor Lenard R. Berlanstein, a specialist in the social and cultural history of modern France based at the University of Virginia in Charlottesville, explains the changing dynamic between audience and actress. As a result of social, cultural and political changes in France – and simultaneous but country-specific alterations in England and America – actresses were transformed from little-better than whores in the eyes of the general public, catering to a mostly male audience, to artists playing to upper- and middle-class men and women.

Men were enchanted by their beauty and grace, while women coveted their clothing and accessories. In effect, the stage became a runway. Hading, Elsie and Burke also had a hand in designing their clothing on and off stage and in creating styles that were copied by women at every level of society, whether or not they had ever seen the actresses perform. Sarah Bernhardt (1844–1923), of course, stands as the epitome of – and pioneering – fashionable actress, inciting a craze for the wearing of gloves as well as for various other feminine wear and preparations. Yet, Hading, Elsie and Burke stand as celebrities who promoted a more readily attainable refinement.

Although the Bard exhibit is contained in one small room, a delightful array of more than 160 objects attest to these actresses’ power as trendsetters. The visiting, cabinet and postcards; magazines and advertisements; clothing and accessories on view reveal equal measures of scholarly and stylish effort on the part of curator Michele Majer and her team. Primary lenders include the Museum of the City of New York, from its superlative costume collection, and the New York Public Library, with three “Merry Widow” hats supplied by the Philadelphia Museum of Art.

Photographs of Hading, Elsie and Burke appeared on millions of cards and in numerous magazines and ads. Developments in printing and photography during the latter half of the 19th century meant that the relative few who could afford cartes de visite (“visiting cards” with photographs hand-mounted on commercially produced cards) and larger “cabinet cards” were joined as collectors by those who could only afford cheaply printed postcards or cut images from periodicals. Many collectors hand-coloured their favourite images and embellished them with glitter and other decorations. The quality and condition of exhibited ephemera suggests that each item was held as a treasure.

Staging Fashion grew out of a seminar taught by show curator and Bard assistant professor Michele Majer, a specialist in clothing and textiles from the 18th to the 20th century. She and a staff of graduate students narrowed the focus of the seminar in time and chose Hading, Elsie and Burke as iconic based on their caché at the box office and involvement with prestigious couturiers.

The catalogue produced by the center and distributed by Yale University Press is as intimate and lovingly put together as the show. The design of the book resembles a scrapbook filled with charming memorabilia. Essays by Majer, Berlanstein, theatre historian Sheila Stowell and Marlis Schweitzer, professor of theatre studies at York University in Toronto, examine broad themes through engaging case studies. Stowell’s essay relates couturier Lucile’s rise from daughter of a Toronto engineer to pioneering dressmaker and, eventually, member of the British aristocracy as Lady Duff Gordon. Lucile’s daring designs (slit skirts, transparent fabrics, plunging necklines and lingerie) and behaviour (inviting men to her fashion shows) made her a celebrity in her own right; when she survived the sinking of the Titanic in 1912, her name was already known worldwide.

Schweitzer’s article considers American Billie Burke as the epitome of the fashionable Broadway actress and All American Girl, despite her beginnings in the British theatre. Best-known these days for playing Glinda the Good Witch of the North in the 1939 film The Wizard of Oz and as wife of American Broadway producer Florenz Ziegfeld, Burke captured the hearts of audiences from an early age. The match with Ziegfeld seemed natural, as his promotion of the all-American girl image made his fortune. Born in America into a family of performers (her father was a clown), Burke was raised in England. More than her beauty and talent, her spunk and girlish spirit elevated her to sought-after leading lady. Her personality was so distinct in the minds of fans that a new adjective – Billie Burkian – was used to describe something as young, fresh and lively.

In Burke’s 1948 autobiography, With a Feather On My Nose, she reflected on seeing herself among the elite in a photographer’s window:

“I remember my excitement when I discovered that Ellis & Walery’s, the most fashionable photographers of the West End, had their windows full of my pictures – and that they were selling right along with those of Lady Randolph Churchill, Queen Alexandra and the beautiful actress Gertie Millar. I was eighteen years old and the year was 1903.”2

So, not only was she a useful marketing tool for couturiers and stage managers, she helped photographers increase business by association.

The careers of Jane Hading and Lily Elsie also prove the existence of a very active and productive commercial web with the actress at its centre. Of the three, Hading was most esteemed as a serious artist. Dressed by French couture house La Ferrière and British designer John Redfern & Sons, Hading stood as a beacon of elegance. Her admirers were as interested in her personal life as in her stage career, and the press lost no time in offering details and interviews to its subscribers. Such was true for Elsie and Burke. Unlike today – when stars’ personal lives generally make them seem even further out of a regular person’s orbit – portrayals of Hading’s, Elsie’s and Burke’s personal lives brought the actresses closer to home as wives, mothers and gardeners.

Elsie’s role as Sonia in the 1907 English adaptation of the Austrian operetta The Merry Widow, costumed to astonishing effect by Lucile, caused quite a stir and propelled Elsie into a bonafide superstar. The show ran for 778 performances in London before touring in Great Britain, while an American production opened on Broadway with a different leading lady. Thousands of postcard images of Elsie circulated. The oversized “Merry Widow” hat ignited quite a bit of chaos, too, when Broadway’s New Amsterdam Theatre promised female ticket holders a free hat, only to run out before filling every request. A few humorous period postcards parodying the craze for hats styled on Lucile’s original – but seemingly growing larger with every rendition – are in the exhibition.

Elsie’s career was briefer than Hading’s and Burke’s, yet when she was at her peak she captivated the likes of a young Cecil Beaton, who credits Elsie with inspiring his love of theatre and photography. She sat for him on a few occasions, and he sang her praises in his writings and to the press. One succinct statement captures his ardent admiration: “Lily Elsie wrapped the whole of my childhood in a haze of roses.”3

Photographs of Elsie showed various facets of her persona, from mysterious and glamorous to candid and provocative, and gave fans a reason to purchase as many cards as possible. Clearly, Elsie, Hading and Burke cultivated the “pose”, informed by their stage work and confident bearings. They wore exquisite outfits exquisitely and earned the devotion of their following. Bard’s Staging Fashion is a lovely portal into a different world, when actresses modelled the height of fashion, poise and good manners. A far distant cousin to the present, when tabloids and reality shows rule the day, such a world is worth entering, if only for an afternoon’s viewing.

1. See The “It” Girls: Elinor Glyn, Novelist, and Her Sister Lucile, Couturière by Meredith Etherington-Smith and Jeremy Pilcher (Hamish Hamilton, 1986).

3. Anything But Merry! The Life and Times of Lily Elsie by David Slattery-Christy (AuthorHouse UK, 2007). 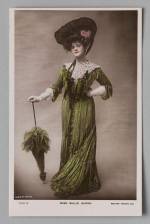 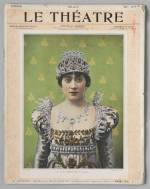 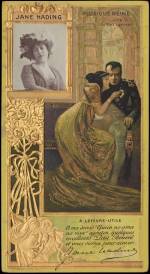 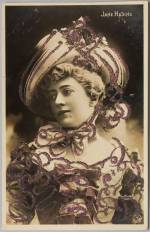 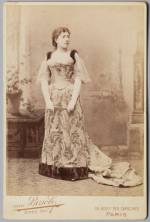 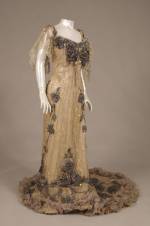 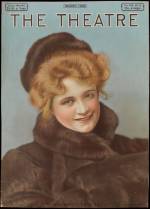 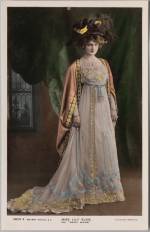 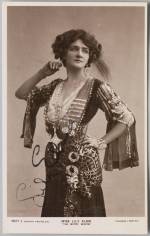 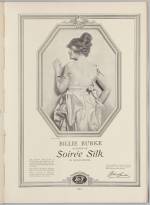