A photographic cornucopia of Kahn’s buildings, this highly visual publications takes its reader on a striking tour of his architectural aesthetic 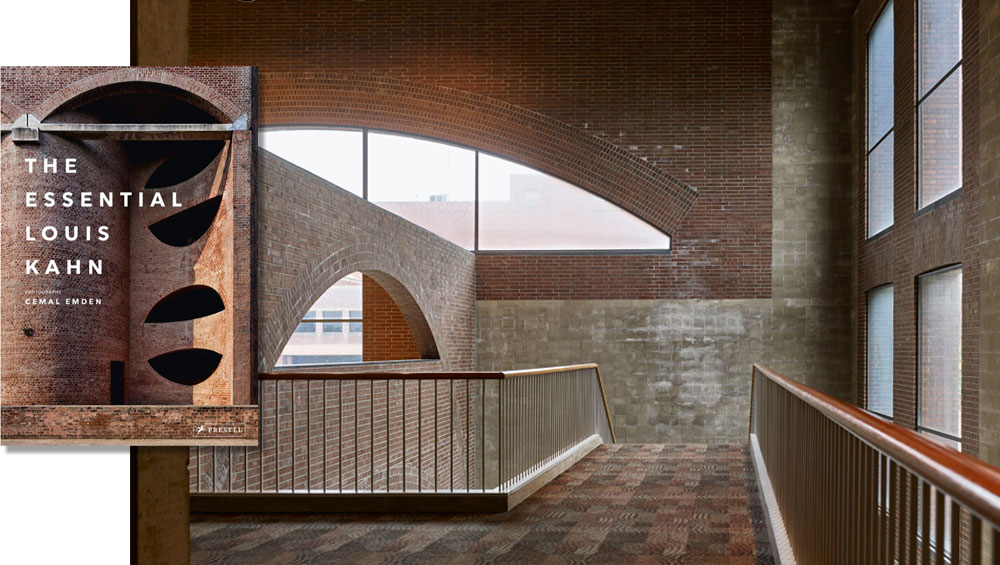 The architecture of Louis Kahn (1901-74) transformed everyday materials such as concrete and brick into buildings akin to sacred monuments. In other words, he designed sublime structures that hold us in wonder. Born in the Russian Empire (now Estonia), Kahn emigrated to the United States with his family in 1906. Yet, despite completing his architectural training in Pennsylvania in 1924, Kahn was in his 50s by the time he found his own distinctive style. His designs for religious, governmental, educational and residential buildings all demonstrate his insistence on the juxtaposing of materials and the use of repetition, as well as geometric precision. His buildings emerged across the world, from his hometown of Philadelphia to Ahmedabad in India and Dhaka in Bangladesh.

The Essential Louis Kahn focuses on 23 buildings designed solely by him and includes a rich and extensive visual element in the form of previously unpublished photographs by the esteemed architectural photographer Cemal Emden. Indeed, Emden’s photographs are present in abundance and give a strong sense of Kahn’s vision for the spaces he designed. Punctuating the book are statements by Kahn which help to formalise his position on, among other things, form, design, space, materials and light. There are a number of additional contributions in the form of essays and other texts by Caroline Maniaque, a professor of architecture, and Jale Erzen and Ayşe Zekiye Abali, both academics.

Erzen’s introductory text presents us with the tenets of Kahn’s architecture. In 10 or so pages, Erzen addresses his career through these tenets, giving us a good feel for Kahn’s approach, his underlying architectural philosophy and what was important to him. Kahn’s architecture is described here as “an integrated union of space and mass, solid and void”, and that certainly seem like a useful way to summarise his concerns. With integration comes a wholeness of being and buildings that can be understood in monumental terms. Many of Kahn’s building begin with a central core that is protected by surrounding structures. The core is enveloped, lending privacy and safeguarding its special atmosphere.

It is difficult to know which of the 23 buildings featured in this publication to mention here. However, Kahn’s Salk Institute for Biological Studies (1959-65) in La Jolla, San Diego, California caught my attention. Its position on the edge of a canyon with cliffs overlooking the Pacific Ocean is a commanding one. The photographs of this medical research laboratory show buildings grouped together with adjoining pavilions, and acute attention to the presence of light and waterways, waterfalls and pools. Kahn explained: “The rainwater, scarce as it is, is gathered in a cistern and then sent up to a higher point where it is distributed by gravity, and these pools are linear and shaded by trees so that evaporation does not too quickly occur.” In this way, Kahn’s design was sensitive to the local climate and weather.

In his designs for Phillips Exeter Academy Library (1965-72) in Exeter, New Hampshire, Kahn was sensitive to the locale too, but in a different way. In his “Comments on the Library” in 1972, he explained how a long-established local brickyard, about to go out of business, was brought to his attention. He loved the irregularity of the bricks and two million were supplied for the building of the library. As well as local bricks, the library also boasts large plate-glass windows and a covered walkway. Inside the building, wooden structures are used to create reading desks and study carrels, each with a small window and shutters. The use of raw materials, textures and geometric design also feature the circle within a square motif that is common to many of Kahn’s designs.

Yale University Art Library (1951-53) in New Haven, Connecticut, includes what Kahn called a “breathing ceiling” in which he housed ventilation, pipes and cables. It features an uninterrupted interior space (made possible by the increased span of the tetrahedral ceiling structure), glazed facades and materials left to show their raw surface finish. This feat of form and materials is a deliberate strategy to draw attention to the building and its construction. As Kahn wrote in 1955: “The formwork was made from floor to floor, and this line was accented in the design; because what we tried to do in the expression of the building was to show in every way how it was built.”

What of Kahn’s residential projects? Between 1943 and 1973, Kahn designed about 30 houses, although only half of these were built. In 1961, he reflected that a “house is the abstract characteristic of spaces good to live in” and that “home is the house and the occupants”. Still, Kahn’s residential projects were not entirely separate from his public works. The two strands of his work ran in parallel, influencing one another as his ideas progressed from project to project. The houses photographed in the book are mostly in Pennsylvania. From the Jesse and Ruth Oser House (1940-42) to the Norman and Doris Fisher House (1960-67), and those in between, they are all houses that invite us in.

I have to mention the Franklin D Roosevelt Four Freedoms Park (1973-2012) in New York City. Kahn had been asked to design a memorial to Roosevelt in 1972. He said: “I had this thought: that a memorial should be a room and a garden.” His idea was of a garden as personal and a room as an extension of self, hence their suitability for a memorial. The project was halted following Kahn’s death in 1974 and not continued until much later, finally being completed in 2012. Emden’s photographs reveal it as a phenomenal space on Roosevelt Island in the middle of the East River. Despite being completed by other architects, it is a testament to Kahn’s belief in the emotional power of abstraction as enormous blocks of white granite construct a roofless outdoor room, still, contemplative and monumental.

In this book, it is Emden’s photographs and Kahn’s words that provide the greatest insights, enriching our understanding of Kahn’s approach to architecture. Still, the contemporary texts by Erzen, Maniaque and Abali function as helpful bridges between Kahn’s architectural philosophy and Emden’s architectural photographs. In this way, they help us to navigate ideas and spaces. Ultimately, it is the images that entice, introducing us to buildings we may wish to visit when we can.