The Maggie’s Centres are a remarkable, altruistic phenomenon, something all too rare in the architecture of our new age.

The concept was first developed by Maggie Keswick and her husband Charles Jencks in 1995 during her last few months before dying of incurable cancer. Charles Jencks continued with the idea and the brief itself rapidly following this tragedy with the series of aptly and commemoratively named Maggie’s Cancer Caring Centres. The first was developed adjoining the Western General Hospital in Edinburgh to the exacting set of parameters already provided with Maggie herself. Before she died, Edinburgh architect Richard Murphy had already been commissioned for the site, identified close by the hospital. The searing experience of Charles Jencks through his bereavement also now gave meaning and integrity to what was to be essentially a private sector, charitable venture. Such was the degree of all round commitment in the Maggie’s Board and supporters that work began on site very soon after.

What is especially notable, as Charles Jencks emphasises here in his revealing introductory survey of present and future Maggie’s Centres, is the evolution here, of a new typological hybrid architecture, reflecting a growing tendency for hospital/health architecture itself, to “morph” into hybrid buildings. This is a global trend towards more humane and varied building types, where both in- and out-patients feel more at home than in the traditional hospital or healthcare buildings, reflecting hotel or village or even shrine or art gallery precedents.

In this superb publication, such historic examples as the medieval Hospice de Beaune (1443) with its remarkable design of “op-art” roof tiles demonstrate a beneficial collusion between visual art and amenable patient accommodation. In the central nave at Beaune, provision was actually made to provide beds in special enclosures like side-chapels. Indeed Maggie Keswick and Charles Jencks were also, together there, much inspired by a visit they had made. Edwin Heathcote, for his part, was also himself inspired by a precedent which lay often unnoticed at the Greek amphitheatre of Epidaurus in ancient Greece, adjoined by a large sleeping hall with 160 private guest spaces for the sick, a sanctuary, and mineral springs, and fountains as in any 18th-century European Spa. Thus the mixing of health centre, theatre, arts, gardens and culture – the hybrid precedent existed in at least the 6th century BC.

This hybrid culture that has now grown is of course a denial of precisely the well-intentioned, white, hygienic and utilitarian design ethos of the 1930s, such as the famous Zonnestraal Sanatorium at Hilversum, Netherlands (1930) the only known precedent to Alvar Aalto’s pioneering Paimio Tuberculosis Sanatorium (1931) in the forests of Southern Finland. But the technology itself of hygiene and healthcare has moved on, and different social and psychological criteria today operate in the battle against disease. Paimio was itself graced by Alvar Aalto’s own design for an elegant, slowly descending /ascending /looping pathway below suitable for wheel chairs. Nothing much has changed in the quest for fresh air, but landscape and garden design, encouraged and partly carried out by Charles Jencks, now an internationally acclaimed landscape designer himself, have grown in the hybrid context too.

The Maggie’s Cancer Caring Centres have expanded across Scotland initially, (Maggie’s homeland) from Edinburgh to Glasgow, to Dundee, Inverness, and Kirkcaldy on the Firth of Forth.  From Richard Murphy’s first memorable design, others have followed (Frank Gehry at Dundee, Zaha Hadid at Kirkcaldy) and at Inverness, where Charles Jencks had himself been invited to provide a landscape garden. At Dundee, Arabella Lennox-Boyd executed a superb, geometric design a photograph of which adorns this current book’s jacket. Landscape has become increasingly important within the evolving brief, which would have especially appealed to Maggie Keswick herself. Her concept of the kitchen table domestic hub is replicated internally in every Centre. Her influence as a garden historian can externally now be detected (through her love of gardens) in the growth of related planted and landscaped sanctuaries, a further quiet commemoration by Jencks. A remarkable personal and professional network of friends and architects has been mobilised by himself, always of the highest quality, yet also on a “horses for courses” basis; the quality of the “fit” is vital.

The subtle yet welcoming architectural impact of all of these multifarious structures is described by Edwin Heathcote in his detailed text. He goes on to describe various new proposals in England, for Cotswolds (MJP Richard MacCormac), Oxford (Wilkinson Eyre) Nottingham (Piers Gough) South Wales plus (Kisho Kurokawa NorthEast – Foreign Office Architects) Sheffield (Hawkins Brown Architects) Gartnavel (OMA) Cambridge – as yet unrealised (Daniel Libeskind), and one more mooted in Scotland – (Lanarkshire Reiach and Hall with Neil Gillespie). The latest to open, in 2008, is that by Rogers Stirk Harbour at London’s Charing Cross Hospital. In each and every Maggie’s Centre it has indeed been a case of creating an original architecture again and again.

This publication is an important work by any standards and it both describes the new architecture with full justice, but also gives an idea of the underlying passion and commitment to the generic idea passed on by the founders. Edwin Heathcote, as co-author, reveals particular insight and quietly acknowledges the true value of an “architecture of hope”. 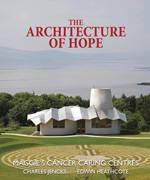