It is a measure of the seriousness with which many Poles regard culture that the national quality daily newspaper, Gazeta Wyborcza, recently devoted a pull-out supplement marking the 15th anniversary of the death (on 8 December 2005) of the director and artist, Tadeusz Kantor.

Kantor, who was born in Wielopole in 1915, came to represent the Polish post-war avant-garde and his productions - in particular 'The Waterhen', 'Lovelies and Dowdies' and 'Let the Artist Die' - have come to be seen as artistic works without parallel. Even now, their aesthetic radicalism is beyond compare, and their analysis and description have engendered a new critical language.

Kantor lived and worked for most of his life in the city of Kraków - the ancient capital of Poland and seat of the Jagiellonian Dynasty. Kraków was rare among Polish cities in that it survived the Second World War intact, because Nazi policy was to annex the city with minimum damage to its architectural fabric.

Therefore, it was fitting and necessary that this city should have hosted a series of events marking Kantor's untimely death. An international symposium was complemented by an exhibition in the Krzysztofory Gallery, documenting the artist/director's links with Germany and Switzerland - as well a show of props and photographs in the Cricoteka, Kantor's archive.

I was first exposed to the work of Kantor in 1989 by the inimitable Ricky Demarco, who led one of his many expeditions to the country. A meeting with Kantor was on our itinerary, and it was a bitter disappointment when the meeting did not take place, as it was undoubtedly the highlight of the journey. What has stuck in mind throughout those intervening years was the story of the 15th-century German artist, Wit Stwosz, who had travelled from Nürnberg to Kraków to escape paying a debt, but who was captured and punished by having a nail driven through his cheek. Stwosz designed and made the magnificent triptych altarpiece in St Mary's Basilica in Kraków's main square. Kantor employed the latent and layered symbolism of the Stwosz story in his theatre-work 'Let the Artist Die'. In Stwosz's suffering, Kantor saw the suffering of artists (and his own), and the story was an apt and enduring metaphor.

The organisers of the symposium should have borne this story in mind when programming the event. Like many other similarly well-intentioned events, it was too tightly packed, with little room to breath (both literally and figuratively). A short walk across the square to the Stwosz altarpiece may have restored many, and fortified them against the series of academicised and ponderous offerings that comprised the majority of the event.

In truth, I gave up and left, and with the help of friends, including Ricky Demarco, made up my own Kantor 'programme', in no small part due to the fact that the proceedings were conducted entirely in Polish and German, with no English translation. Where the head had overwhelmed the heart, now a balance was struck. In private, we watched Andrzej Wajda's beautiful and compelling interpretation of Kantor's 'The Dead Class'.
Although Kantor profoundly disliked the film director's final cut, I found Wajda's take refreshing and open. But, most importantly, it was a masterful record of an art form, which, by definition, suffers from its temporality. Perhaps, like me, Wajda found Kantor's enclosed world of darkness and cellars (where the majority of his works were originally performed) too claustrophobic. Wajda led us outside to a hill overlooking Wawel Castle and the Wisla river - the wind blew in the grass as the class climbed to escape their inevitable fate. 'Even in light there is death', Wajda seemed to be saying.

Demarco helped me in my escape by taking us to Kantor's private apartment - not generally open to the public. Here I was touched to see a cross in Kantor's diary for 7 December 1990, the day before his death (for many of his effects had not been disturbed since that time). Was it significant that Kantor had been in love with a young woman near the end of his life? Her fate haunted me and I was chilled to find her referred to as 'The Angel of Death'. Kantor's room had a cell-like simplicity - everything seemed to have its place: functional, with no fuss.

In another basement, this time in the Cricoteka, the exhibition of photographs and props seemed more like empty shells than living relics. There was no sound, and even the fabulous, brutal and cruel kinetic contraptions designed and employed by Kantor in his works were stilled and silent.

Perhaps the most important aspect of such an event is the human contacts one makes. Here we met one of Cricot 2's best-known actresses, Miroslawa (Mira) Rychlinka. Still beautiful in her 70s, Mira had played her antithesis in 'The Dead Class' - an old German man - and a host of other characters in numerous performances. Discussing 'The Waterhen', Mira observed, 'I was young. I never questioned Kantor's directions. I did what he asked. He sat me in a bath and poured cold water over me. They wrote down what I said. My shrieks became the text. My mother came to the performance. She didn't really understand what I was doing. But she saw it and after that she understood. "It's life", she said, "whether you are in Argentina, Japan or Scotland."'

Along with her son, the photographer Artur Rychlicki, Mira led us to Kantor's country house in the tiny village of Hucisko, 30 kms south of Kraków. Nothing could have prepared us for the beauty of Kantor's architectural vision. Like the man himself, the building was a blend of the traditional and the visionary - a place where the Polish vernacular material of wood embraced the values of Le Corbusier. In the garden, an impossibly vast 20 m chair (again designed by Kantor himself) did not seem incongruous, given what we know of the man. Its inspiration had come from the photomontage he had made in 1970, 'Pomnik Krzesla na Rynku w Krakowie' ('Monumental Chair in Kraków Square').

Later, in Warsaw, I visited Wieslaw Borowski, Director of the Foksal Gallery, a long-time confidant of Kantor, who Demarco described as 'the only person Kantor really trusted'. Borowski - wistful, gentle, intelligent - confirmed my feeling that the conference was of limited value and really only served to oil the academic machine: 'Kantor would have hated it. He abhorred the idea of being put in an academic box,' he confided.

In retrospect, such a comment makes even more sense. If Kantor was about anything, it was about rupturing the whole idea of static texts and performances with fixed action. He taught his actors one important credo: only in forgetting what you know do you really have the ability to create. Such radicalism is surely beyond academic scrutiny and analysis. 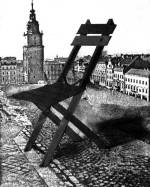 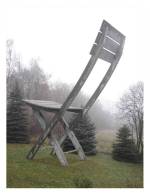