At this French sculpture park, whose landscape is dotted with his structures, the Japanese architect has designed, in his inimitable style, a new pavilion to exhibit drawings of 10 or so of his schemes 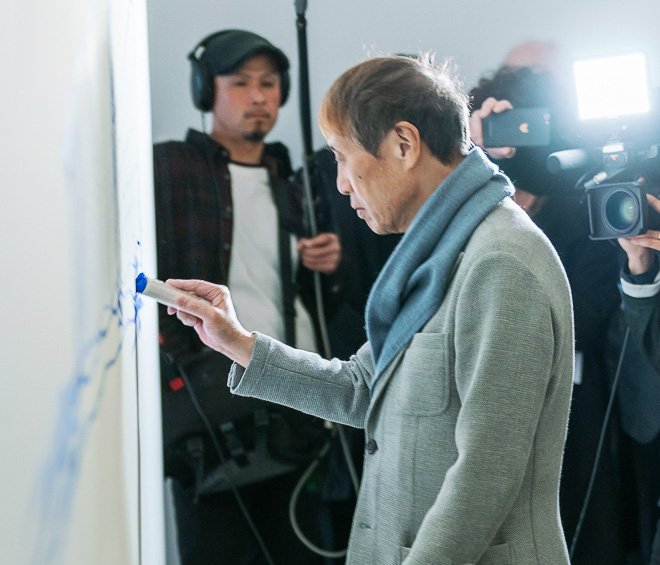 I have observed many kinds of artist behaviours at a multitude of openings, but this is a first for me. I am here to witness Tadao Ando (b1941, Osaka, Japan) launch his exhibition at Château La Coste - a biodynamic vineyard-cum-art and sculpture park in Provence – when he whips out a fat blue marker pen and starts drawing all over the pristine white surface of the central display stand. One freehand drawing after another appears along its (formerly) immaculate surface, and then he takes his troupe of followers – agent, translator, friends and family, film crew, invited onlookers – around the back of the display’s concrete envelope and dashes off a large drawing on its rear. You never know what to expect of Ando, in person – or so I am told later, by those who have worked with him. 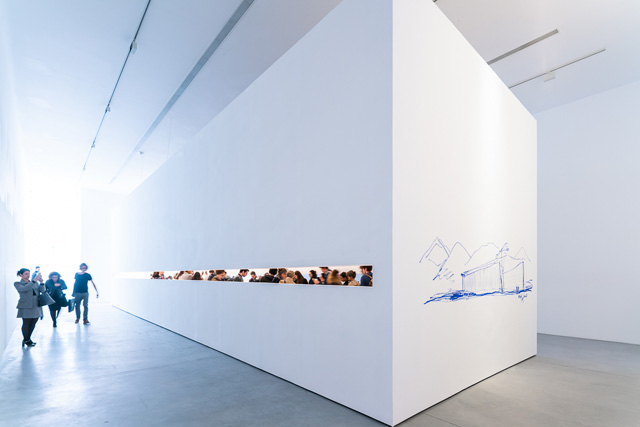 However, you do know exactly what to expect of his buildings: decisive slices of precisely pockmarked concrete, creating rigorous, defining lines in the landscape that steer you along strict pathways around the building’s perimeter and up to the entrance. There are often slim passageways along or between steel and glass facades, exposing you to preordained vistas, often across waterfront settings. Ando - a former boxer and self-taught architect, who has now completed more than 200 buildings around the world - has such a distinctive, signature style. And it is all over Château La Coste.

Apparently, this single-minded architect took some persuading by the vineyard’s owner, Belfast-born property developer turned luxury hotelier Paddy McKillen, to build here. But once he was, with Four Cubes to Contemplate Our Environment (2008-11), his structures have proliferated, outnumbering those McKillen has commissioned from other Pritzker Prize-winners – who include Jean Nouvel (a stainless- steel winery, 2008), Frank Gehry (a music room, using the deconstructed wood and glass pavilion Gehry exhibited at the Serpentine Gallery in 2008) and Renzo Piano (a semi-underground art gallery surrounded by a wine store, 2017). At lightning speed, Ando dashes off sketches of the extraordinary chapel, La Chapelle (2011) he has created up on a rocky promontory here, and the Centre d’Art (2011) shop and restaurant pavilion, perched nearby on its own shallow lake (flanked on one side by a Louise Bourgeois and an Alexander Calder on the other); and he did so with such ease that it was as if these exterior structures were embedded inside him. 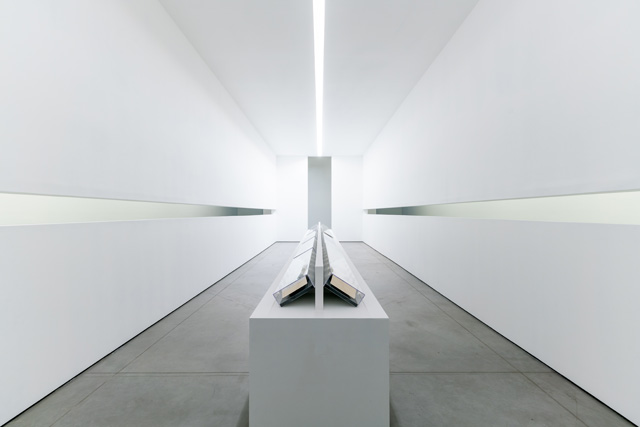 The live drawing demonstration was a suitable initiation ritual for the gravity-defying concrete pavilion that Ando designed for his exhibition, set within the chilly, windowless environment of an old wine storehouse. Gravity-defying because of the long, slender apertures that run the length of the pavilion on either side. Along the ceiling of this bright, white space, a singular recessed light carves a line down the middle. Reduced to the simplest elements, the pavilion makes it all the easier to focus on what is positioned inside: the aforementioned display stand, its contents tilted 45 degrees and positioned at just the right height for the viewer’s gaze to land easily without stooping (an inconvenience required by every table-height, flat display case). 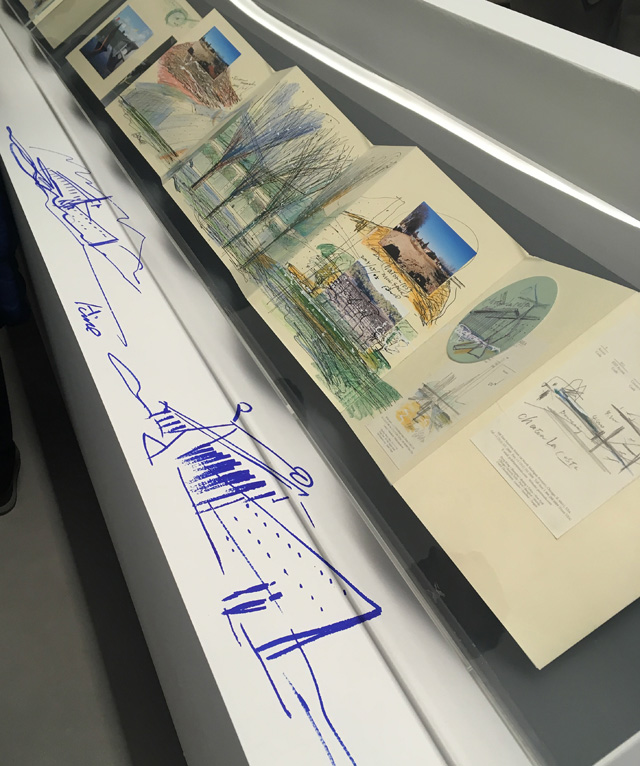 Inside the case is a sequence of short, folded sketchbooks of Ando’s projects. He uses the format of an Emakimono or Emaki scroll (a horizontal, illustrated scroll whose origins date back to 11th-century Japan), and the order of the works they depict is not clear, and certainly not chronological. There are no captions to steer you, beyond the odd one- or two-word summary, hand-drawn in English or Japanese in the margins. There are realised and unrealised projects among the 10 or so schemes depicted here.

There is the early (2002) Modern Art Museum of Fort Worth, which really put Ando on the map. We have the Punta della Dogana in Venice, Ando’s monolithic, minimalist refurbishment of an old customs house for François Pinault’s art collection – as well as the proposed giant concrete cylinder Ando has designed as a gallery for more of Pinault’s collection, within Paris’s 19th-century Bourse. There is his (cancelled) proposal for the Calder Museum, a housing project in Japan, diagrams for his Pompidou retrospective in 2018, his Floating Forest proposal (220 acres of landfill in Tokyo Bay Ando wishes to transform by planting half a million trees) and the Church of the Light he built in Osaka in 1989, with its decisive cruciform incisions. 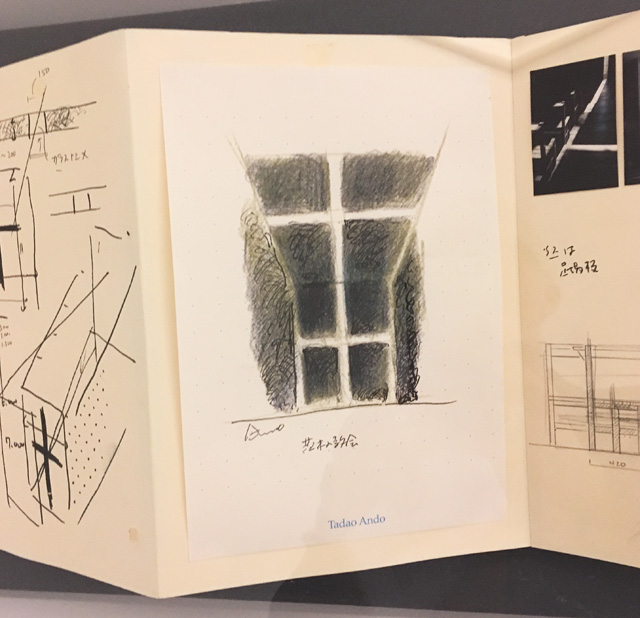 Tadao Ando, drawing of the Church of the Light, Osaka. Photo: Veronica Simpson.

It is refreshing to approach an architectural exhibition without a single plan or section. A few small photos are cut and pasted on top of sketches in what comes across as an almost free-association of projects and places; a mood board of architectural interventions. For someone who builds in concrete and glass, his sketches are really very colourful. Trees and forests are splotched in bright, spring green, waterways appear as either great pools or meandering snakes of cerulean blue. It is a nice articulation of the fact that, for Ando, the context – geography, vegetation, topography - is every bit as important as what he inserts into it. 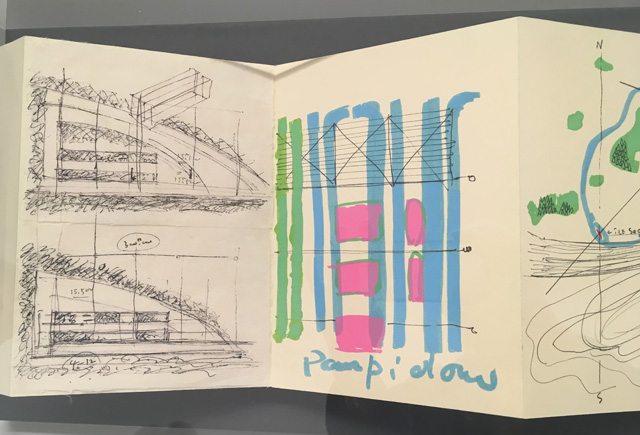 According to the curator, Daniel Kennedy, the sketches seen here are mostly ones Ando had in his archives, with three more contributed specially for the show. There was only a modest amount of consultation with the Château la Coste team about the content, it seems, although the concrete envelope framing the exhibition will have been very precisely dictated. On the whole, a weighting towards those schemes he has completed for McKillen is natural, in tribute to a client who has provided so many opportunities for him to make work of so many different kinds and on such different scales, from small sculptural interventions to elegantly realised buildings. We have drawings of the elliptical “silence” fountain outside the Connaught hotel in London, which he created for McKillen (its owner) and the landlord, Grosvenor Britain & Ireland, in 2011 (it appears perfectly tranquil until, every 15 minutes, it releases a gentle hiss and clouds of vapour). 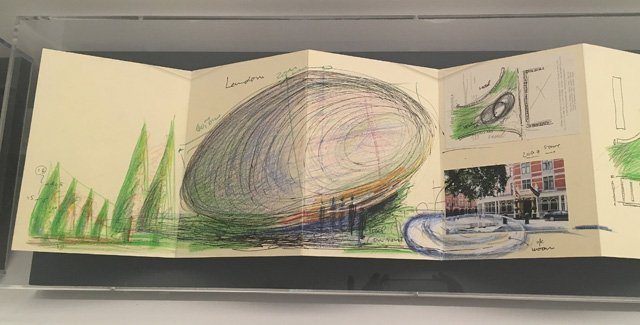 The simplicity, the graphic appeal, the personal, almost deliberately obscure mixture of projects and presentations is really rather charming. After all, for those who are not architects themselves, the best way of experiencing or learning about architecture is inside a living example - in visceral, immersive, real time.

That is where Château La Coste also comes up trumps. You can experience plenty more of Ando’s environments, from the minimalist slab of his Gate (2011) at the site’s entrance through the oversized Origami Benches (2011) scattered through its pine trees, right up to the Centre d’Art with its shop and lakeside restaurant. The most magical of all, however, has to be La Chapelle up on the hill. Discovering this simple, stone, mountain hut in the grounds, Ando’s response was to repair its walls and envelope the building in one of his trademark glass and steel pavilions. 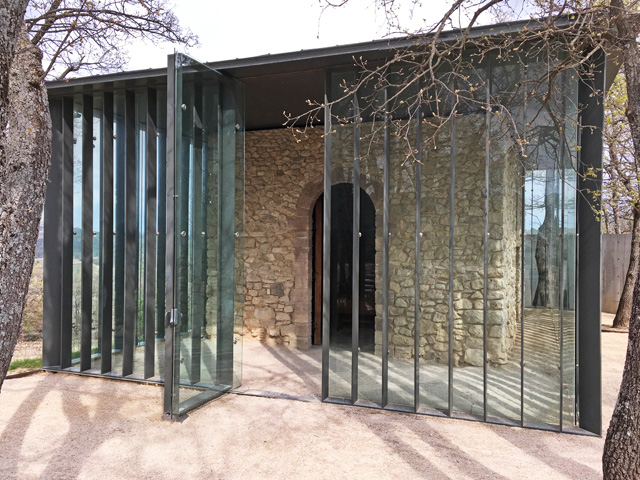 Inside, it seems like the plainest kind of place for retreat and contemplation, with just a few wooden benches, a black ceiling, a simple altar created from slabs of frosted glass, and three mysterious holes punched low down behind it into the hut’s rear wall, exposed to the rugged valleys and hillsides of the surrounding Bouches-du-Rhone. But there comes an extraordinary moment when the heavy, oak door is closed: the altar is suddenly illuminated with light that pours in from these holes, while the ceiling – which floats a couple of centimetres above the walls – is delicately rimmed in daylight; a veritable halo.

If the exhibition doesn’t exactly do justice to this architect’s oeuvre (and neither does it try to), the surrounding structures more than make up for it. 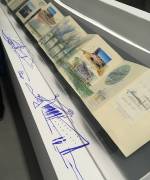 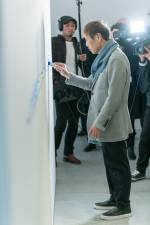 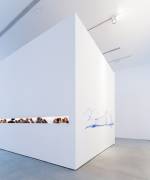 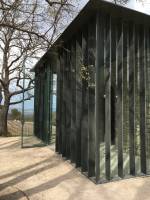