The lives of the women behind the Zero artists

The lives of the women behind the Zero artists

Strong Women For Art: In Conversation with Anna Lenz
Published by Hirmer, 2013

Strong Women For Art: In Conversation with Anna Lenz is a celebration of women who have lived with members of the artist group Zero.

Some of these women are practising artists in their own right. The stories recount extraordinary experiences of artists’ communities, travel and creativity, and the role played by these women. Their privileged lifestyle might be better understood in the context of Europe in the 1950s and 60s, when social expectations of women were very different from those of today. Yet in recounting their lives, each of these exceptional women – all blessed with amazing strength of character and energy – inform a social and art-historical record that is engaging to read.

Anna Lenz, who interviewed 20 women, begins her introduction to this collection by addressing her own position in the male-centred European art world of the 50s and 60s. “At first I didn’t have anything to do with art,” she explains. “It was my husband Gerhard, who began collecting works by artists of our generation who dared to usher in a new dawn …” Zero, a group of male artists, was founded in 1957 by Heinz Mack and Otto Piene, and is sometimes associated with concepts related to Nouveau Réalisme. Its manifesto, “Zero is stillness. Zero is the beginning,” marked a significant change in the making and thinking of art, and the group became one of the most important postwar collaborative movements. Other members included Yves Klein, Lucio Fontana, Piero Manzoni, Daniel Spoerri, Jean Tinguely and Günther Uecker.

“At the very beginning the artists’ wives and partners weren’t important for me,” Lenz tells us. “Many of them, like myself, didn’t come to the fore but stayed in the background.” Lenz and her husband grew to know the artists whose works they collected over the years, and their friendships grew. The interviews in this book, therefore, are like recollections recounted to a friend. Consequently, there is a sense of gentle intimacy and mutual respect woven through them.

The artist, poet and scientist Elizabeth Goldring-Piene (wife of Otto Piene) recounts magical journeys. She and her husband visited Tobago, the Pribilof Islands off the coast of Alaska during the mating season of the seal colonies, and Taroudant in Morocco, where they stayed in an Arabian-style hotel complete with strutting peacocks. During one of their trips to Tobago, Goldring-Piene lost her eyesight – we are not told how – but her account of her husband’s response shows us their supportive relationship beautifully. Asked by Lenz what dreams or wishes she has for the future, Goldring-Piene recalls how, when she was unable to see anything at all, her husband described the sunset to her “so vividly and precisely that I really saw it”. This led her to work on developing apparatus that can “make visual experiences come alive for people with impaired vision”.

The majority of the women in this book were children during the second world war, and thus rooted in the pre-feminism of the postwar years at a time when Europe was recovering from the horrors of the trenches and the atrocities of death camps – striving to move beyond those traumas and reinvent society. Some of their stories touch briefly on these experiences.

“It was moving for me to experience to what degree some of the women, including those who are themselves artists, put themselves and their personal dreams on the back burner, at least partially to give their men the necessary free space to be able to work creatively,” says Lenz. Now she is giving those women a platform, bringing light to, and celebrating, their lives.

Art historian and critic Antje von Graevenitz, wife of artist and Zero member Gerhard von Graevenitz, tells Lenz: “Before you start asking me questions, I’d like to congratulate you on your idea for this publication … for the first time here, the women of my generation are being given the opportunity to express themselves.” And then she begins her testimony – her childhood, the war and sometimes having to go into the bomb shelter three times a night: “I still dream about it today.” As a young girl, she wanted to be an artist, but her teacher said she did not have the capacity to “overwinter”. Von Graevenitz says: “You have to be able to follow your inner drive even when nobody’s interested … later on I experienced with Gerhard and other artists how important that is – the ability to overwinter – it is a special quality and a strength for which I have great respect.”

Lenz asks each woman the same questions: about their childhood, whether their parents were creative, whether they had siblings, what dreams they had, whether they wanted to meet an artist, and how their children – if they had them – affected their lives. These stories are grounded by the domestic, turning them far away from the types of lives documented by art historian Giorgio Vasari.

These testimonies are herstories – a clumsy word, yet one that we might need to bring into our language if we are to get any closer to equality in the telling of stories. There is also a potent schism here: those male artists, though daring to usher in a new dawn with their thinking and making, were still conventionally reliant on women prepared to experience only their partners’ reflected glory rather than their own. Yet rather than viewing these stories through a narrow prism of gender, perhaps it is more constructive to engage one at a time with the communities, creativities, partnerships and supportive relationships shown to us through these recollections.

Not every life was full of joy; artist and architect Nanda Vigo, for several years partner of Piero Manzoni, had a “terrible” grandfather and a “dreadful” teacher. Her story is an account of how she has deftly navigated the issue of choice versus practical necessity – financial security versus the time and space to be creative. “Among other things,” she says, “I’m an architect, but primarily I’m a painter. I earn my money through architecture so that I can live with my paintings … Art alone wasn’t enough for me, and architecture wasn’t either.”

Artist Rotraut Klein-Moquay, sister of Günther Uecker and wife of Yves Klein, tells Lenz: “You must have a great potential within yourself and self-confidence, so that you know that you won’t lose yourself when you give yourself over to someone else.” To varying degrees, these women supported their partners – as Lenz says, “giv[ing] their men the necessary free space to be able to work creatively”. Yet Klein-Moquay would put this rather differently: “If you’ve the opportunity of helping an artist, it’s like a blessing … As an artist you’re embraced by the divine. It’s something quite special that runs through you …” This heady, maybe even romantic, idea of what an artist is might meet an acerbic response today, but these lives are a fascinating read. We are given a new perspective on creativity and relationships, and every one of these women’s stories shows tremendous strength of character and determination.

There are many lovely passages in this collection, and from Susanne de Vries’s account of her relationship with her husband Herman, we can glean sound counsel on how to navigate our lives and relate to each other: “… on this journey he adapted himself to me and I adapted myself to him and it was wonderful … with a lot of experiences. We learned to understand each other and then we stayed together …”

The one problematic issue is the book’s title: would we tolerate a booked called Strong Men For Art or would we assume it was ironic? 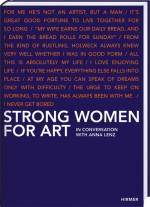 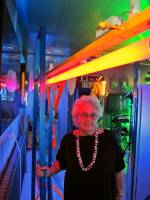