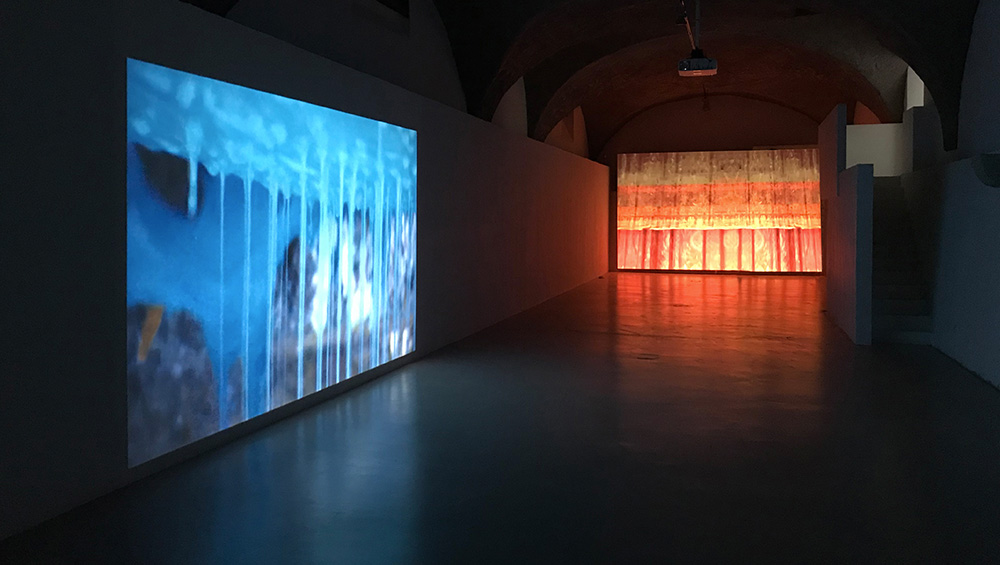 Stephen Dean and Anne Deleporte’s stunning exhibitions in a mix of media and materials at Frac Corsica are completely at home in the historic space, each artist’s works responding to the unique aspects of the site in gratifying ways. Originally a medieval fortress high up in the mountains of Corte, it has been made over into an exhibition space and modernised: the interior is more or less white-cubed but the bones of the original structure remain, past tapping against the present, upholding it.

Dean, born in France, and Deleporte, born in Corsica, are based in New York and show nationally and internationally, with particularly close French connections. Half a dozen works by Dean are meticulously installed throughout the five galleries, the placement restrained, usually one per room – although that one piece is more than sufficient to fill it – so much so that it seems to be a much more expansive showing. Atlas (2019) is the opener, a series of 60 watercolours on small rectangles of rolling paper (that made me smile) mounted on Arches paper and laid next to each other inside a long glass-topped vitrine on sawhorses, eye-filling, free-floating reds, blues, violets, oranges that intimate landscapes, seascapes and skyscapes. Colour, however, is the leitmotif of his practice. 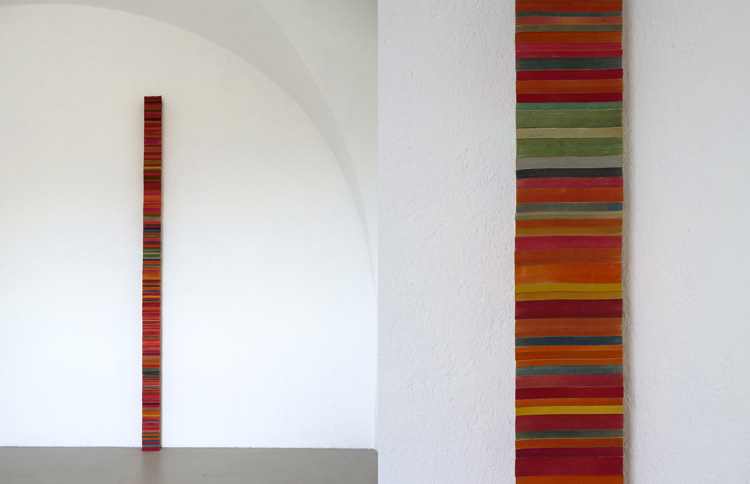 Atlas shares the space with Account (2012), a tall, neat stack of livres de poche paperbacks placed so only the block of pages show and, for a moment, you are mystified as to its material, another recurrent theme. As is the economy of the gesture, transforming the books much more than expected, colour and form subsuming text and the object’s identity: Dean’s version of an endless column.

His signature ladder, aluminium paned with dichroic glass between its rungs, is one of his most sought-after works. Here – its scale varies – it rises approximately 3.35 metres (11 feet), the same as the stacked books in the preceding room. 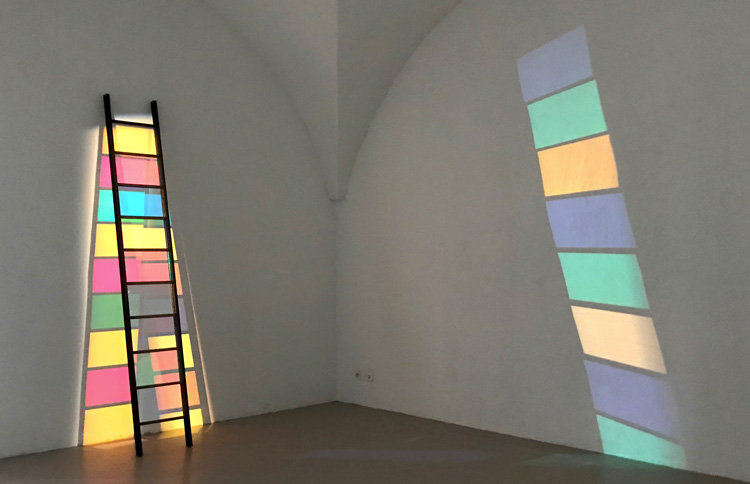 Propped against a wall, its presence is multiplied four times through a full spectrum of shifting reflections, their configuration, location and depth of hue pegged to the changes in the room’s ambient light. You might think of this as solar energy, a spectacular transient performance powered by light via a low-tech construct in which the phenomenological and poetic are inseparable.

Help wanted (2019), a large wall installation, is an irregular grid, the sections all parts of help-wanted ads, imprinted with shades of gorgeous blues of varying opacities. This work is related to Atlas, as all the works are related to each other in multiple, conscious ways, and is another version of the encyclopaedic grid in which colour and shape dominate, while image and text have significant but supporting roles. 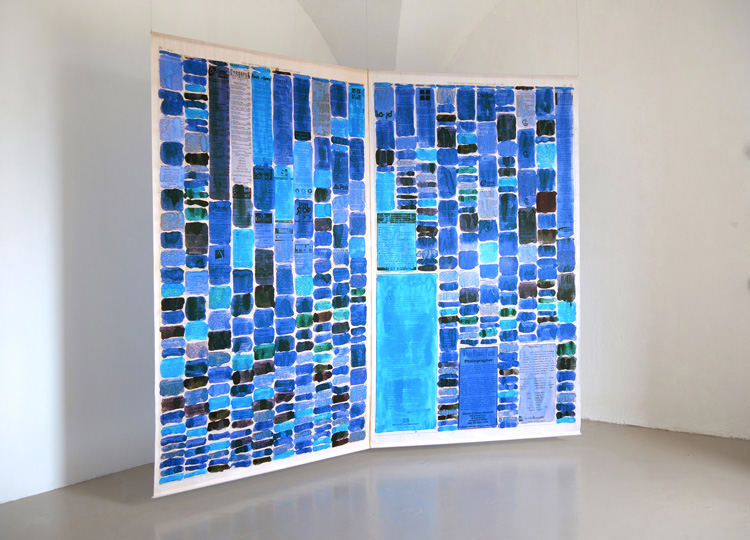 The largest gallery – baronial in proportions – was reserved for two immersive video projections. One is called Vortex (2008), the earliest work present, and the other Rope (2019), his newest film, shown here for the first time. The former is a swirl of ravishing, mesmerising colours but, as often is the case with Dean, at first we are not quite sure what we are looking at. The cosmic? The microscopic? Tsunamis? Polar blizzards? Whipped meringue? Slicks of black oil? Blood? It takes a while to realise – spoiler alert – that the flux we are looking at is industrial paint being made in a factory. It reminds you that manufacturing such paint is highly toxic and there are few safety precautions in place; none of the workers stays long because it is so hazardous. While Dean folds social critique into his projects, formal concerns are what connects his images, not narrative. He constantly asks himself perceptual questions such as: can colour be like music and create a reverberation, a vibrato? Can colour precede image unyoked to representation? Can colour affect the hue that preceded it or the hue that follows it in time, the way colours placed next to each other spatially can affect each other? It might also be noted that Dean constantly experiments with state-of-the art colour reproduction methods.

Rope, on the other hand, tilts towards the more narrative, if not in a straightforward manner. It streams a number of non-linear, associative episodes compiled from 10 years of footage that includes striking sequences shot at the theatre Marie Antoinette built at Versailles, the Villa Medici in Rome, the École de Cirque in Bordeaux and in the streets of Belém, Brazil. Connected by the imagery of rope, of pulley systems and similar networks of greater or lesser elaboration, the film begins with the raising of the curtain at the Petit Théâtre de la Reine. That, however, only reveals another curtain behind it, as if the illusions that comprise art are not so easily penetrated. About connections, physical and abstract, we see, additionally, the hoisting of a life-sized royal statue by rope as it is moved from one location to another as well as a silhouetted acrobat who evokes, among other possibilities, a slave, a hanged figure.

There is also the delirious annual celebration in Belém honouring the Virgin at the Cirio de Nazaré propelled by the strong rhythmic beat of the soundtrack and an undercurrent of violence. The participants’ hands, at one point, grasp a rope that links them together into a procession that winds through the port city (at another point they will cut sections from the rope for themselves), one of the most gripping of the sequences seen, indicative of the diversity of Brazilian society and culture. The film’s palette is more restricted than in Vortex but richer, more primal, at times Caravaggesque in its dramatic chiaroscuro. The film ends with a quiet moment taken near a Gypsy encampment by a river. A short stick dangles from a plaited red thread over the luminous water, as if about to drop anchor, the red brilliant against the rippled patterns of greens. A rope, a stick – it is an object pared down to its basic components – from which infinite objects can be generated.

Deleporte has two works on view. Air Piano (2013) is a short, single-channel video of a length of red ribbon tied around a pole, reminiscent of Dean’s stick. The ribbon, however, gesticulates wildly, enthusiastically, in time to Prokofiev’s Sonata No. 7, as if it were an exasperated conductor. It is simple, immediate and comical, easy to think of as human with a distinct personality (Leonard Bernstein?), part of an imaginative conspiracy between artist, object and viewer.

The other work is outside, Les Quatorze Meurtrières (Fourteen Arrow Slits or Fourteen Loopholes). It is an intervention in the long wall edging the courtyard, flanked by several ancient fig trees at either end. The stone barricade, taller than the height of a man, faces the town below and the mountains in the distance. Part of the citadel’s defence system, it is pierced at regular intervals by openings for crossbows. 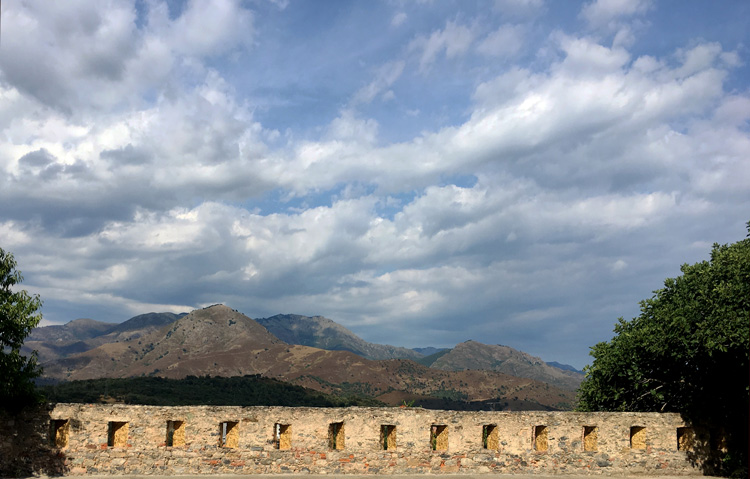 Deleporte, characteristically, has unobtrusively altered what was there. Gilding the rough stone on one side of the embrasure of each of 14 openings, she has doubled the glow and complicated the shadows. What might seem an easy feat is anything but. The application is laborious, the gold leaf fragile, the stone resistant. Depending on the time of day and the light conditions, the gold might barely register, or it might flare up, tantalise, the light perhaps a rediscovered treasure left by departed gods. She makes us examine more closely the structure, materiality and the once violent purpose of what we are looking at, highlighting and reframing it. Possessed of an uncanny sensitivity to what is in front of her, Deleporte nonchalantly transforms the overlooked, the commonplace, the transient into something whimsical, witty, beguiling, something of unconventional beauty, arguably the best kind.