Light3 at the Fridman Gallery in New York, curated by Lilly Wei, is a must-see for anyone interested in the multiple ways in which light challenges our perception of colour, form and structure. The exhibition features the work of Stephen Dean, Jan Tichy and Ethan Ryman, three artists with very different sensibilities, who employ light as a means of defamiliarising what we see. Studio International had the opportunity to speak with Dean and Tichy about their work at the gallery. Ryman answered our questions via email.

A French-American artist who is known for isolating colour through various mediums, Dean has two freestanding works in the front room nearest the natural light from the gallery’s windows. At first glance, Prayer Mill (2009) seems oddly casual. It is a found black metal postcard rack holding 40 disparate colour panels of dichroic glass. This piece is best observed up close where its visual familiarity dissolves into a multidimensional abstraction, a joyous cacophony of colour complexity – the result of light reflecting between panels.

“All the ideas that I develop, I begin with watercolour,” explains Dean, “so the watercolour is omnipresent in the work. Then it builds up and becomes a sort of strange totem made with really hi-tech glass and a postcard rack.”

Directly opposite is Dean’s A Frame (2013), a black aluminium ladder with 14 panels of dichroic glass. Like Prayer Mill, this piece is in a constant state of flux. It seemingly changes colour and reflects light differently in response to viewer relation. Whereas the visual information of Prayer Mill exists within the parameter of the structure, aesthetically, A Frame is more outward bound: from a distant perspective, the light projects multiples of the ladder’s form and glass on to the wall. Up close, when you look through one coloured pane to another of a different colour, a sort of density and saturation develop. Even the black frame changes colour when you peer at it through the glass. Both works, despite their 3D structures, bespeak a painterly awareness, drawing attention not to the details of their form, but to manifestations of colour.

Dean relates the nature of these works to painting: “For me, the way I make these pieces, it’s like a form of painting, but it’s not in the idea of turning painting into a three dimensional space, but about the looking. There is so much about looking to begin with that they’re sort of constructed in a very visual way.”

Four works by Ryman are mounted in various relationships to the far wall of the front room under a warm, luminous light. Constructed of painted wood panels and recessed frames, these works are a lyrical exchange between light and shadow, form and colour.

Configuration 1 (2014) comprises nine square recessed frames. They are arranged in a grid and painted various hues of white. Uniformly, light casts shadows both across their horizontal planes and around the frames along the wall. Here, shadow, a 3D element, contributes to the 2D picture plane. “I wanted to make a situation where the viewer could flatten the work and see 3D forms in two dimensions,” explains Ryman. He not only “flattens” the work for viewers, but also blurs the distinction between the work and the wall on which it is mounted.

In Blue Shift (2014), a quadripartite, two vertical stripes of blue masking tape parallel the corner of the wall, acting as subtle counterpoints to two hollowed shadow boxes that are mounted perpendicularly to the wall on either side of the tape. Shadow plays a central role in this piece as it mirrors the frames, projecting their silhouettes. From every viewpoint, new forms and juxtapositions of the frames and blue tape emerge. “I wanted to draw attention to the idea that, if you look at something aesthetically, as in an abstract painting, it doesn’t matter so much what something is, it only matters what it looks like,” says Ryman.

Over the course of five days, Prague-born, Chicago-based artist, Tichy ventured behind the gallery’s perfectly lit, pristine white walls to the stygian darkness of the storage space for the creation of his site-specific, time-based light projection, Installation No 20 (walls). Emptied of tables and chairs, the storage space is essentially a long, dark, narrow hallway, which Tichy transforms into a deeply engaging and intimate architectural performance. Using two synchronised video projectors, he animates the space with specks of light that expand and trace the minutiae – the cracks and uneven surfaces one typically encounters in such spaces, but rarely notices.

“There is something tangible in the notion of these rips, something I would want to breathe life into,” explains Tichy.

He also “breathes life” into the architectural nature of the space: light travels up the exposed wood beams of one wall while projecting geometric shadows across the other; light illuminates the cement floor all along the hallway, transforming the radiator into an ethereal radiating sculpture. Sometimes the light reads like sunlight, as if it is emanating from a natural source. “The notion of sunlight exists here more than in some of my other pieces because of the wood beams, which makes the light seem yellowish on this side.”

Light moves and shifts seamlessly in this piece at an even tempo like a musical score. “I’m following the shapes of what is here, of the structure, and of the light as well. When I am working on these pieces, I’m thinking about them because of the space and the time and movement, like music.” Since the hallway is so narrow, this piece requires its viewers to stand still and observe the 12-minute projection in solitude.

“Architecture is built for us,” says Tichy. “It is always in relation to the human body. But this space wasn’t built for the human body, right? It is meant to be a storage space, but actually it’s still something we can enter.”

Dean, Ryman and Tichy are poets of light, which, as curator Lilly Wei states in the press release, is their “means to comprehend and engage with the world”. It is the driving force of change – of colour diffusion, shadow and architectural space. Light, as Dean describes it, “is a great medium by itself, impalpable and ever-present”. 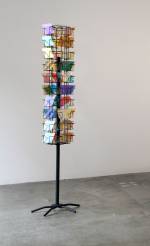 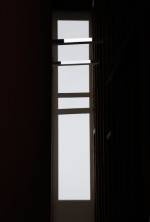 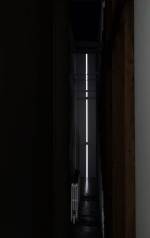 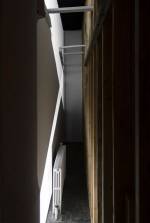 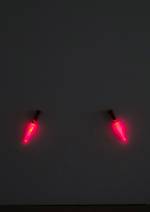