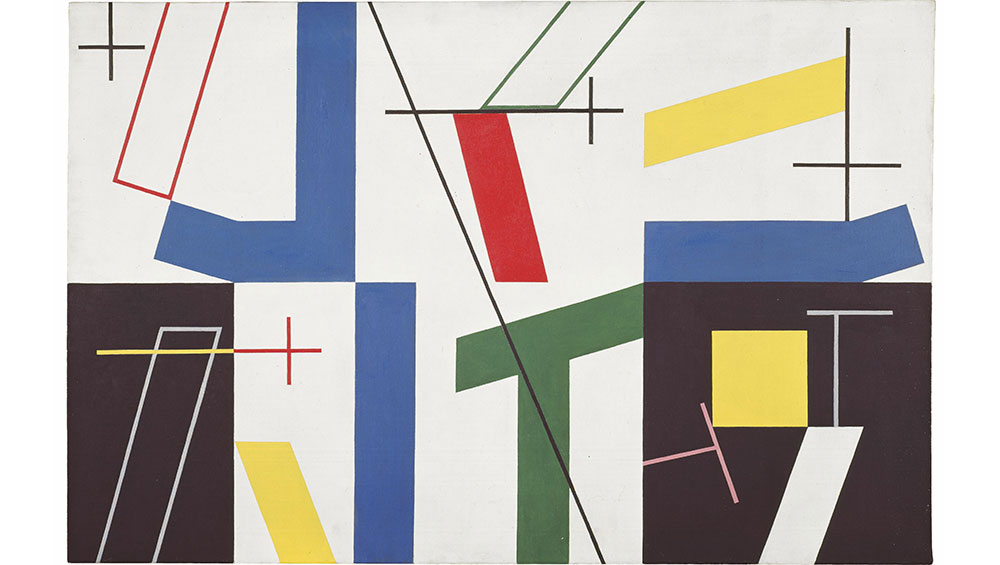 In a muggy July in London, where we are still slowly emerging from the worries and restrictions of Covid, this exhibition of work by the Swiss artist Sophie Taeuber-Arp (1889-1943) is a joyous riot of colour and playfulness. Large exhibitions can sometimes seem to try too hard, to cram in too much work, but not here. The huge airy spaces of the galleries at Tate Modern really give these works by Taeuber-Arp room to breathe and visitors time and space to look and appreciate them in full. 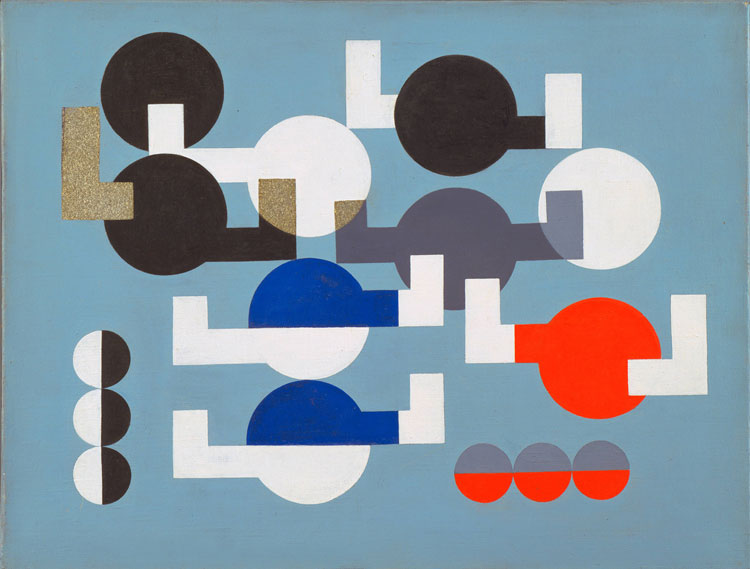 The exhibition begins with a quotation from Taeuber-Arp  placed prominently on the gallery wall. We are told that, in 1922, she claimed: “Only when we go into ourselves and attempt to be entirely true to ourselves will we succeed in making things of value, living things, and in this way help to develop a new style that is fitting for us.” It is a good place to start and prepares us for an encounter with a body of work that seems to quiver with energy not only as individual works, but in its entirety. Taeuber-Arp blew disciplinary boundaries apart in her work and it is in the interrelationship between fine art, craft and design that she found innovative ways to operate as a craft professional, teacher, architect, interior designer, painter, sculptor, performer, jewellery-maker and editor of an international art magazine. Further, she worked, travelled and developed her abstract aesthetic model during a tumultuous period in Europe when the effects of two world wars were at the forefront of everyday life. 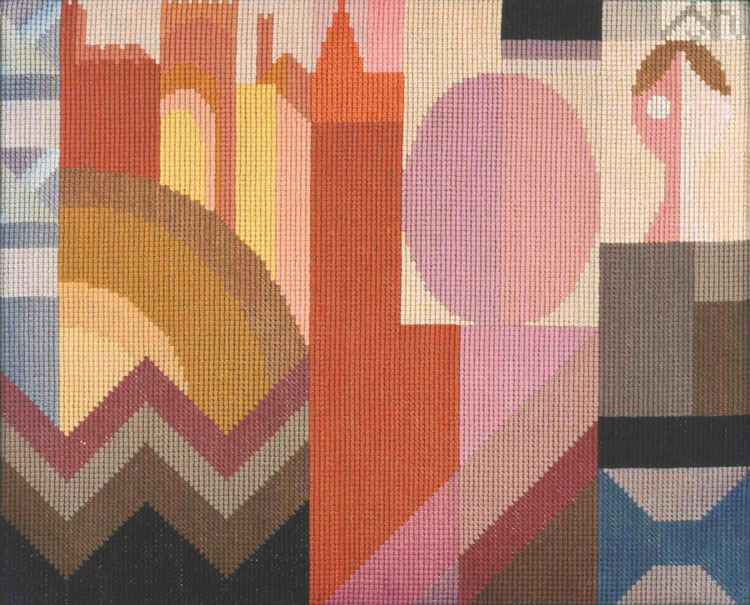 When Taeuber-Arp moved to Zurich in 1914, at the beginning of the first world war, she taught at the Trade School and became a successful craft professional. Switzerland was a neutral country, and artists, writers and thinkers flocked to the country to avoid the conflict. It was her work with textiles, the colours of craft-making and the movement of dance (she trained at Rudolf von Laban’s School of the Art of Movement) that sustained her creative life. While her passion and excitement for this versatile artistic language is evident in the diversity of her work, her strength of commitment to continuing to develop a broader, more open, practice through abstraction lends it cohesion. 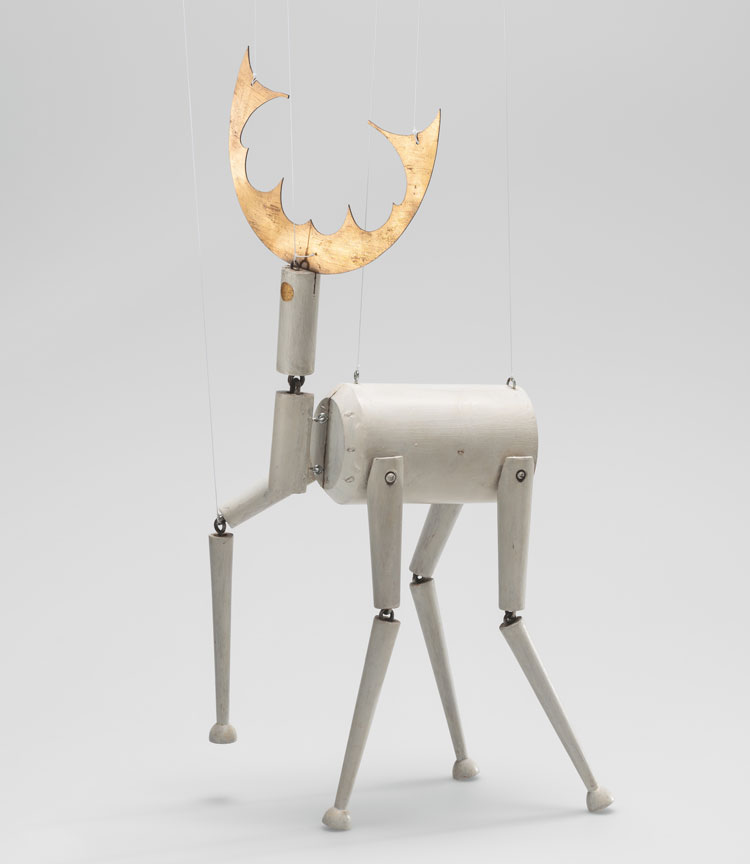 The artists, poets and performers of dada embraced absurdist, playful, radical practices and Taeuber-Arp was part of that. Still, she brought different disciplines together. The commission, in 1918, to make puppets for the fairytale play King Stag saw Taeuber-Arp bring numerous experiences and interests together – performance, movement and woodworking, in this instance. These puppets with their exposed joints and loose limbs appear somehow rebellious in the large display case that contains them. In 1920, she photographed herself with her famous Dada Head. In this curious image, intended for the unrealised dada anthology Dadaglobe, Taeuber-Arp peers one-eyed from behind the named and dated wooden head.

It was in Zurich that she developed her own style, abstracting directly from geometric grid structures of textiles. This is seen clearly in the wonderful Vertical-Horizonal series of compositions (1916-25), in which colours and shapes seem to sing and vibrate, sometimes appearing to be barely contained within their frame. It was also in Zurich that she met Hans (Jean) Arp (1886-1966). When they married in 1922, she changed her name from Taeuber to Taeuber-Arp. 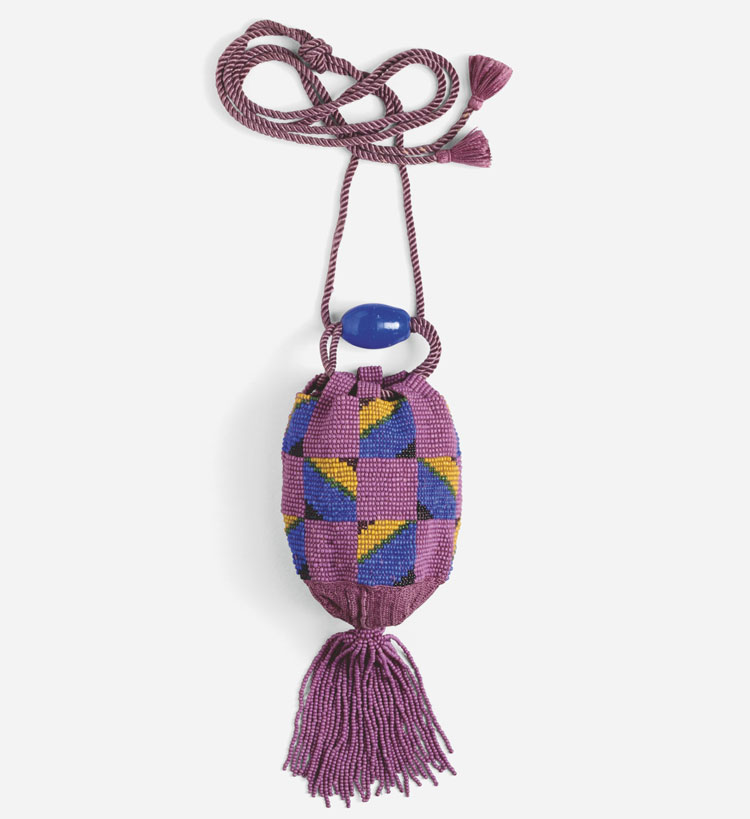 In 1926, the pair were invited to redesign part of the Aubette building in Strasbourg. The design for the floor of the passageway in the Aubette, even in its two-dimensional form, gives a sense of the light, airy space Taeuber-Arp had planned. In the two years that followed, she undertook a number of interior design projects. The stained-glass windows shown in this exhibition are wonderful to see. Cleverly displayed and lit from behind, these modern works bring the artist’s vertical-horizontal aesthetic together with the traditional techniques of leaded stained-glass. Across the gallery space, we see further examples of Taeuber-Arp’s ingenuity, in the house she designed for herself and Arp, including the furniture, in the town of Clamart near Paris. When the couple moved to Clamart in 1929, Taeuber-Arp joined and exhibited with the abstract artists’ group Cercle et Carré (Circle and Square). Soon, she began to exhibit her work internationally. At the same time, she exhibited in Paris with the Abstraction-Création group, founded in 1931.

In the 30s, Taeuber-Arp’s painting took a new direction. She had visited Munich in 1931, observing the rise of the Nazi party. Witnessing people “willingly narrowing their horizon” was utterly depressing to Taeuber-Arp, who subsequently deepened her commitment to a broader abstract creative practice. Her work took on a freer, more organic form in two and three dimensions. Experimenting with space, shape and colour in the late 30s, she used turned-wood forms to create a picture space that could be engaged with straight-on (as a painting) or from the side (as a sculpture), giving the viewer playful agency and allowing for the different interplay of shapes and layers within the work. These reliefs attracted the attention of Wassily Kandinsky. When German troops entered Paris in June 1940, Taeuber-Arp and Arp left for the south of France. From 1940 until 1942, when the couple were able to travel to Switzerland, she experimented with line drawing, describing them as a “mixture of free drawings and construction”. 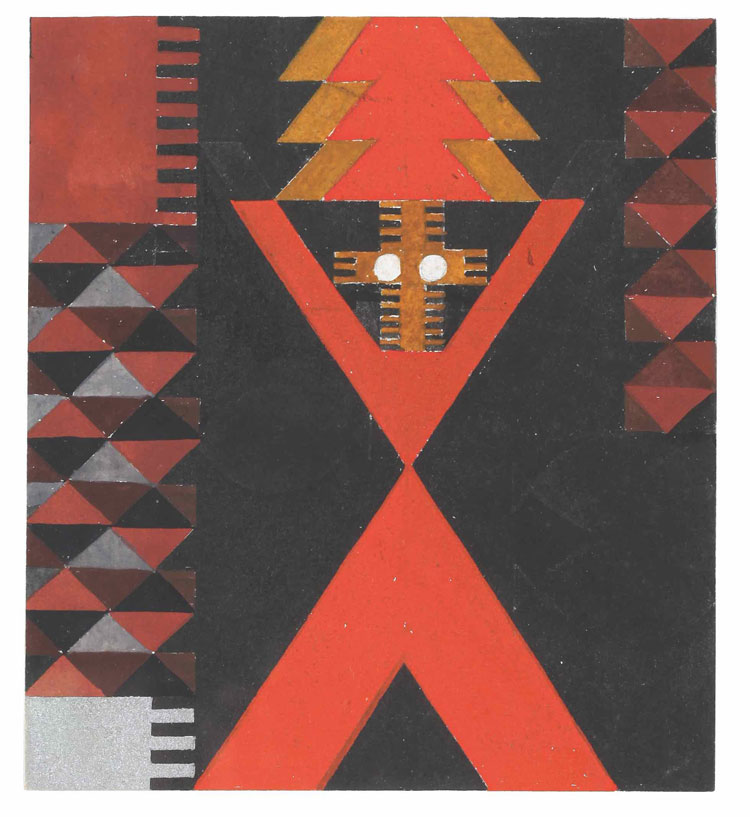 Every room in this exhibition brings more surprises. While they are all connected and follow on one from another, they still surprise and delight. Taeuber-Arp’s determination to follow her own path was recognised in 1948 by her friend Paule Vézelay, who explained: “Every colour, line and form has been made with the utmost conviction.” Despite the range of work on display, it is Taeuber-Arp’s unflinching conviction in her project – a broad, open creative practice through abstraction – that is the common thread. That is what brings her diverse practice, and this exhibition, together. Colours pop off the canvas, light shines through stained-glass, curves and circles shape-shift and puppets seem ready to take breath. Everything in this exhibition made me smile and I left feeling uplifted.

• This show tours to the Museum of Modern Art, New York, from 21 November to 12 March 2022. It is available as a virtual tour at the Kunstmuseum Basel. 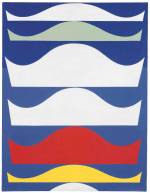