With his tree motorbikes modelled on Harley-Davidsons and bamboo fashioned from metal, Shi subverts the traditional Chinese scholar’s garden, mirroring the transformation of China from an agrarian nation into industrial nation with the positives and the perils that has brought 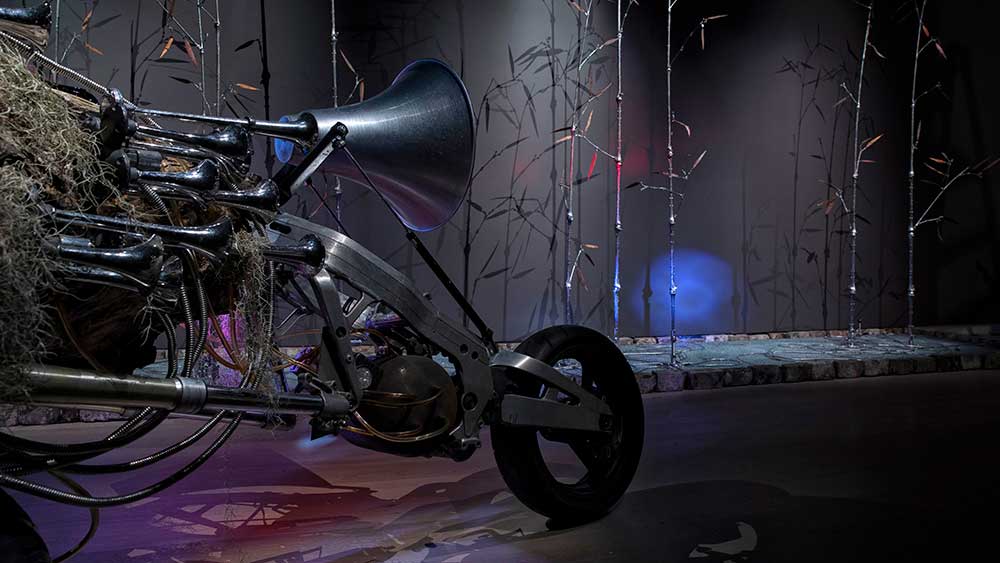 I stepped into the gallery hesitantly at first, to allow my eyes to adjust to the sudden dimness and to get my bearings. Soon enough, the long, relatively narrow rectangular room stretched out in front of me and made me think of the unfurling of a painted Chinese scroll, although multiplied many times in size, the imagery no longer flat but spectacularly three-dimensional. The darkness, and the whiff of mystery it promised, was intensified by strategically placed lighting that haloed a couple of motorcycles parked at either end, like precious relics, to be worshipped, or like costly commodities, to be sold – or both. 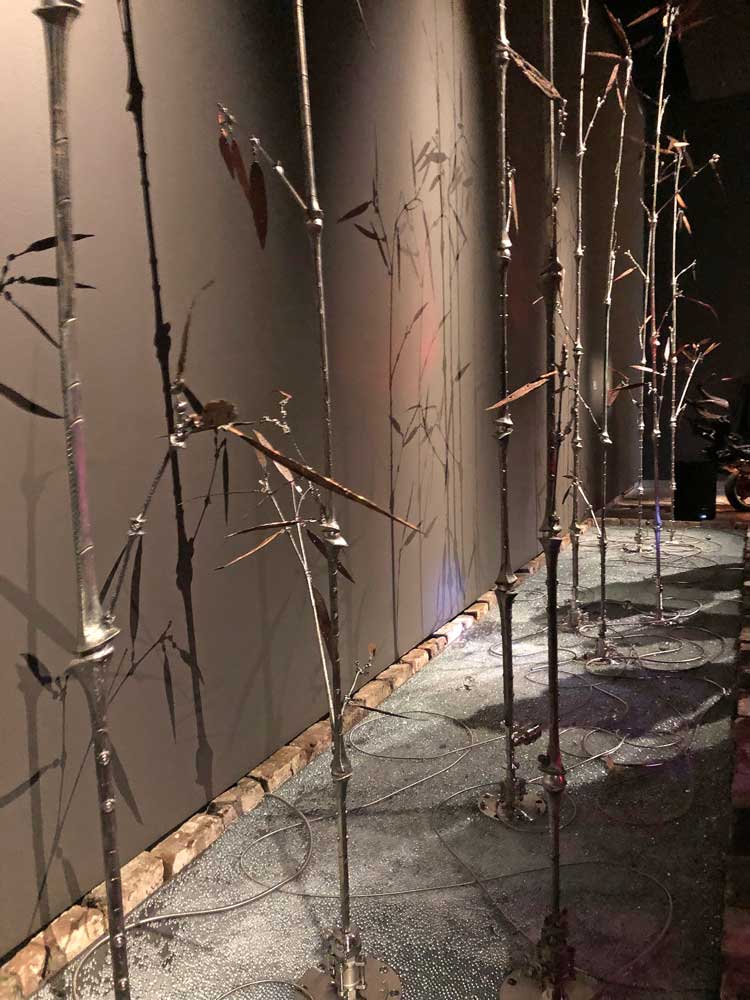 The lights also glinted off the elegantly columnar stalks and leaves of the bamboo plants that were positioned along the walls, turning them gold. It’s The Machine in the Garden literalised, the title of a 1954 book by Leo Marx that examined the transformation of the US from an agrarian nation into an industrial one in the 19th century, much like China’s more recent trajectory. As the artist Shi Jinsong (b1969, Hubei Province, China) envisions it in his installation, Waiting for a response which we might never get, when the technical blasts its way into the sylvan, it adds excitement, speed and glamour. But it also upends tradition, as he also tells us, creating chaos and destruction in its wake, if not implemented judiciously, as is becoming more and more apparent. 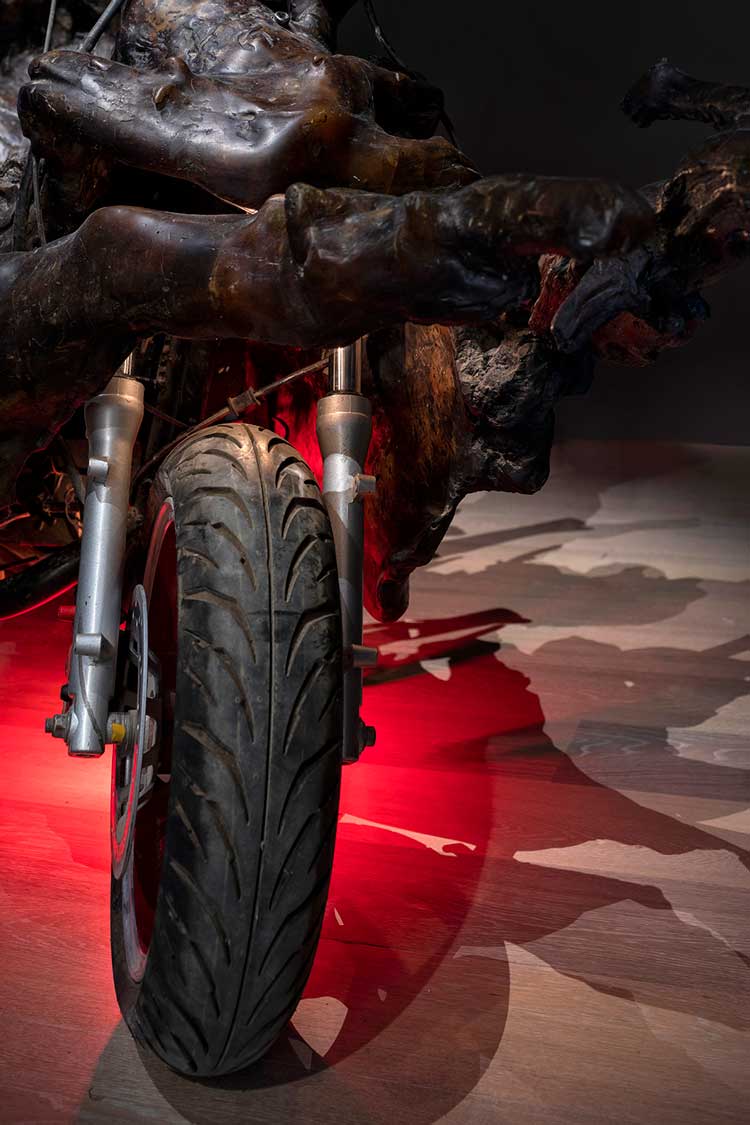 Shi’s installation theatrically addresses the transitioning from one order into another in a mesh of dialectical pairings that are threaded throughout his first solo in an American museum. In his adroit balancing of opposites (past v present, stasis v change, utility v ornament, nature v mechanisation, and more), readings bounce off each other to present a more complex dialogue. And if bamboo and dragons seem rather retrograde and orientalising, it is Shi’s heritage that he evokes, one that still resonates in multiple ways, with and without irony, with and without nostalgia. Content, what is permissible always uncertain, never quite free of scrutiny in China, is currently subjected to even more complicated strictures and self-censorship due to policies that have become increasingly nationalistic. 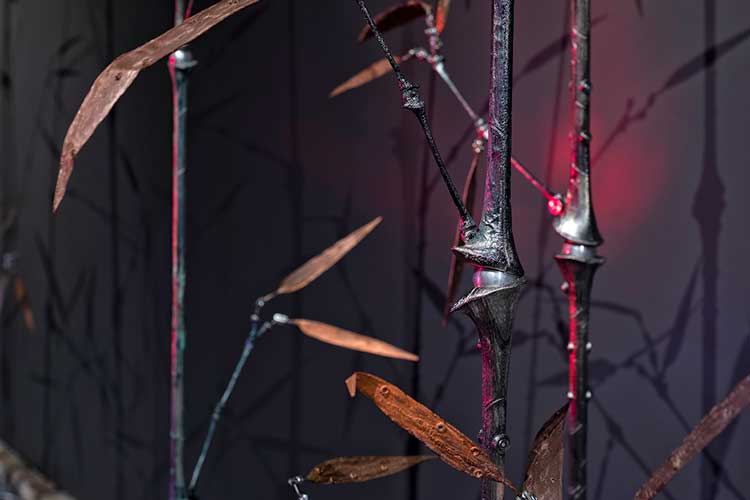 The image of the garden as a privileged space for quiet meditation by scholars and their learned peers is one such venerated emblem, pictured in Chinese painting throughout its long history. But Shi’s garden is far less pastoral, less serene than its models. The bamboo, for instance, is now metallic, screwed neatly, tightly together at its joints, its leaves essentially weaponised, honed to a knife-like edge. A simulation of its natural counterpart, it is visually alluring, but, at the same time, it is dangerous, a bit of a monstrosity, its identity transmogrified.

The bamboo grove is frequently included as part of the garden motif, emblematic of Asia where it is ubiquitous and grows with extraordinary rapidity. Shi’s bamboo stalks pose questions about the natural and the artificial: which is better? How do we blend past and present and their different systems of knowledge? (I remember looking down from my 40th-floor hotel room on a building under construction in Beijing in the early 2000s. It was massive, another high-rise glass and steel addition to the already dense skyline, but the scaffolding used to build each level was made of bamboo and I was struck by the contrast and the nonchalant combining of ancient and new technologies.) 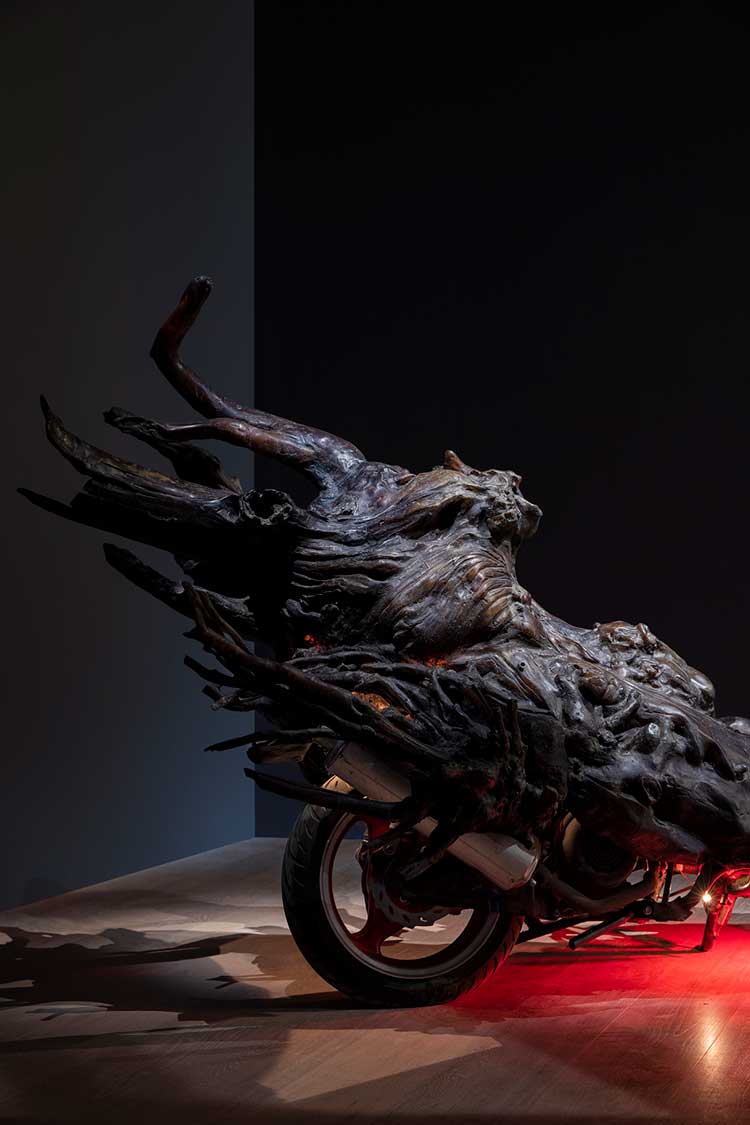 To this bucolic setting, Shi introduces two of his “tree” motorcycles, a sculpture that he has reprised with variations since creating it in 2008. They add an overtly discordant note, pulling his scenario even more insistently into the modern. In this iteration, the gnarled, polished wood body – a thing of sinuous beauty – is ornately draped with local flora. Here, it is Spanish moss, which, unlike the bamboo, is real (the danger here primarily in the nasty chiggers and mites that make it their home if untreated). His bikes are modelled on Harley-Davidsons, a bizarre and captivating combo of the mechanical and the botanical, elongated to form a mini-stretch bike, and can be ridden, or so the artist says (although I confess to doubt). The bright wood frame that connects the wheels twists in serpentine curves to suggest mythical dragons, and the sides and handlebars are outfitted with what look like klaxons and other noisemakers, as if the Shi mobile could be a novel kind of musical instrument. The painted surfaces are burnished to a hard sheen, and beneath the two motorcycles is a lurid red glow – like hellfire, perhaps, stoked by invisible, impish devils. 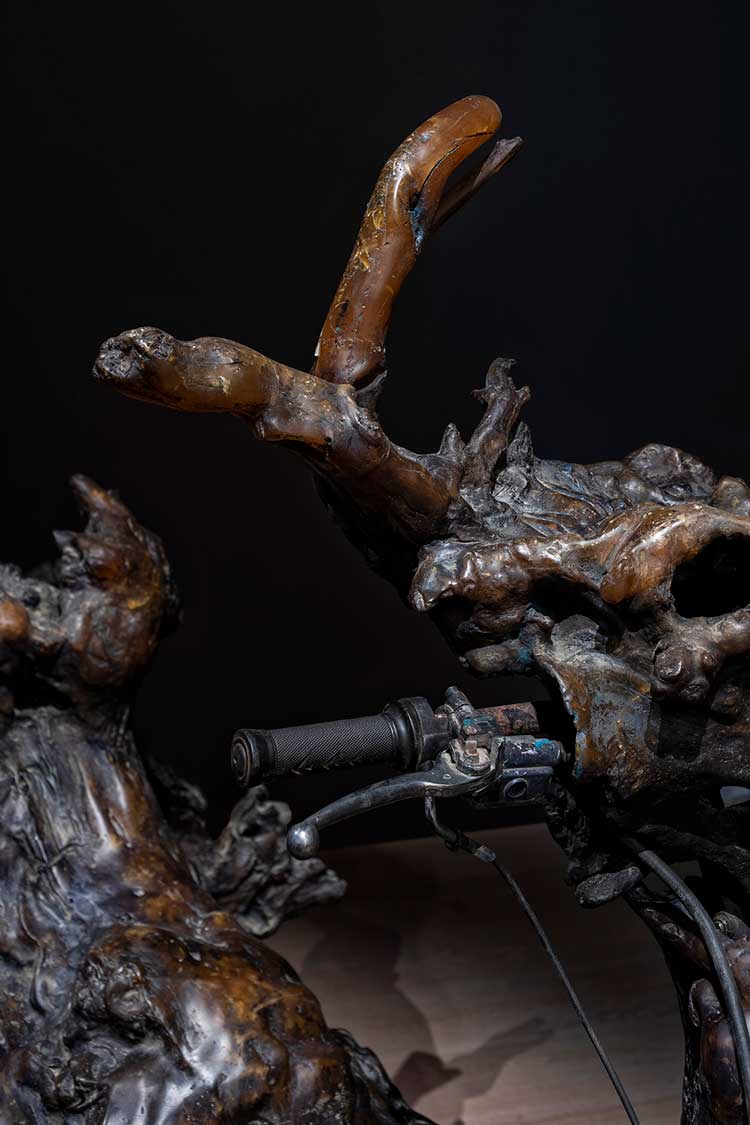 Even in stillness, these fabulously elaborate motorcycles imply speed. I can almost hear them revving up, sending a reverb through the space, the pursuits they represent far from dreamy philosophical abstractions. It seems as if Easy Rider (1969), the classic American road trip film, had been intercut with a dragon procession, the ghosts of Peter Fonda and Bruce Lee squaring off, more cinematic than Confucian or Daoist.

Shi plays fast and loose with opposites and traditions in his updated fantasia of a Chinese scholar’s garden, traipsing transgressively through the sacred grove, raising questions, tweaking cliches, leaving it open-ended, a tribute to adventure, freedom, and the unfettered imagination in a world where all that is also increasingly endangered. 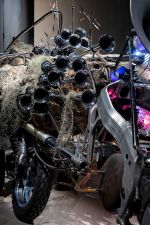 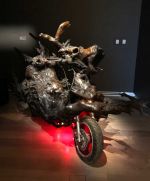