Sarah Raphael (1960-2001) was described as one of Britain’s finest figurative painters when she died tragically at the age of 40, leaving her circle of artist and writer friends (poet laureate Andrew Motion, actor Daniel Day-Lewis and the writers William Boyd and Clive James) numb with grief.

The daughter of the novelist and Oscar-winning film writer Frederic Raphael, she and her two brothers had a bohemian and inspired childhood, regularly accompanying their parents to Rome and to their second home on the Greek island of Ios. The Childhood Cube for the Millennium Dome, London, a rich and complex sculpture, is perhaps her best-known work, now in the collection of the Victoria and Albert Museum and on loan to the Museum of Childhood in Bethnal Green. The Childhood Cube grew out of her box constructions made for family, and evokes doll’s house creations and games; it represents endless possibility and a fierce creative intellect.

Raphael was also in demand as a portrait painter, and her landscape work made using natural pigments and oil, following a trip to Australia, was outstanding as a skilful interpretation of an alien and intriguing place, although the intense blue skies must have reminded her of Greece.  She travelled into the landscape with a supply of light wooden boards and made detailed and impressive studies; back in her London studio, they acted not as actual references, but as a store of images for her imagination. The works that followed were forceful and dramatic. She told Motion that she had encountered a place where “everything was symbolic – each stone, each patch of scrub”, but which was also simultaneously and only itself: untouched by people, probably unseen, untrodden-on and unremarked. The desert she felt was imbued with the longevity of time, but it was also fragile: “In a different way, it made me feel the planet was dying – not because of pollution and all the human stuff – though there is that of course. More because it is living out its own cycle, living its own time.”

On return to London and to her two young daughters (with husband Nicholas McDowell), she embarked on the body of work that was shown at Agnew’s Gallery in London and then at the Fitzwilliam Museum in Cambridge. She believed that she had quite the wrong temperament for exhibiting: acute anxiety, fear of the reception of the work, embarrassed to feel that way and seemingly very ungrateful. Her personal life became intense when pregnant with her third child: the migraines that she had suffered from her early 20s, intensified. William Packer describes the migraine with great insight in his compelling biography of the artist. Her pregnancy ruled out the use of her regular (and wildly expensive medication), yet she experienced a continuous attack of migraine for 18 months. By the time of her third daughter’s birth she was addicted to morphine-based pethidine, which had been prescribed instead. “I am a strong-willed person, and come from a hard-working, fairly abstemious family, who have lots of outlets for joy, so I’m not obvious addict material, or didn’t think I was. But on pethidine, the combination of the pain going at last, and the euphoria of the opiates themselves, was lethal,” said Raphael. After the intensive withdrawal in hospital and weeks of counselling and other treatments, she began to draw again. Living with the ongoing migraine demanded a new level of acceptance of her condition and an extremely well-paced, disciplined life. With the breakdown of her marriage and with three daughters to raise, her inventive and marvellous new work indicates both her astounding courage and determination and her remarkable powers of invention in visual terms.

The exhibition last year at Marlborough Fine Art, London, showed the Strip paintings 1996-98 created using a grid, where strips of small forms resemble a pictogram, symbols in boxes, and are self-referential: they were inventive, poignant and deeply moving. Packer describes the work Strip Page 7, which measures almost two metres square as, “the darkest, bleakest, most claustrophobic and inward-turned of all the Strip paintings, the repetition painfully insistent, relieved only by an occasional burst of visual incident. Sarah is yet on the brink of emerging from her long ordeal by migraine and pethidine addiction.”

Packer has written a fine and perceptive tribute to Raphael’s rare talent and charismatic individuality, a career that, although cut all too short, was both prolific and inspiring. 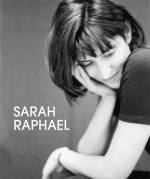 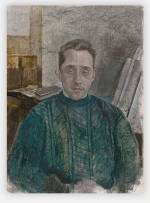 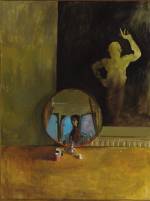