Roman Ondák: The Source of Art is in the Life of a People

Roman Ondák: The Source of Art is in the Life of a People

In a show lasting 100 days and symbolising 100 years, the celebrated conceptual artist Roman Ondák explores ideas around history and the passage of time, as well as revealing hidden messages 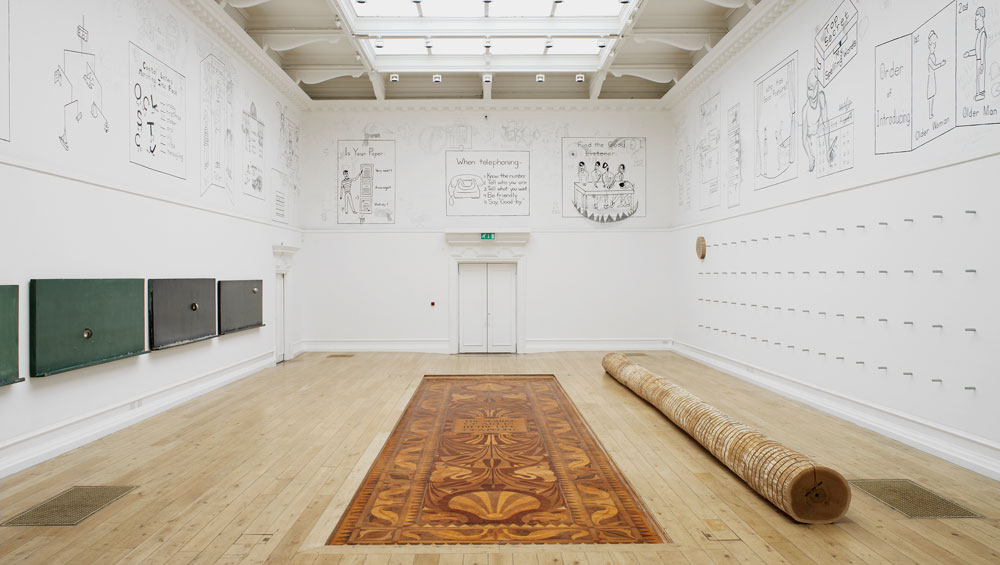 In a 2012 interview, Roman Ondák (b1966 Slovakia) stated, in reference to his work: “It’s all about the mystery of how people behave in general.” Fast-forward to 2016 and this idea reverberates throughout the entire space at South London Gallery.

On entering the main gallery space, your eyes immediately focus on the centre of the floor where the wooden floorboards have been removed to reveal a hidden message. But Ondák didn’t create this message. Rather, he has revealed an inscription on the gallery’s original 19th-century marquetry floor, designed by British artist and children’s book creator Walter Crane, that states: “The source of art is in the life of a people.”

For years, Ondák has explored ways in which to transcend physical boundaries within public art spaces, as a means of kicking down, to borrow Aldous Huxley’s phrase, the doors of perception. When Ondák was invited to design the pavilion for the Czech and Slovak republics at the 2009 Venice Biennale, he allowed the vegetation from the Giardini to continue growing within the building. It demonstrated a deconstructive approach to constructing something new. By revealing the hidden message in the floorboards of the South London Gallery space, Ondák has yet again allowed the internal nature of the art space to reveal itself and provide new meaning and understanding.

The other key symbolic gesture from this show relates to the period in which the show lasts for: 100 days. On each day of the exhibition, a pre-sawn disc is separated from the trunk of an oak tree placed on the floor of the space. What is revealed in ink stamped on to the wood is text stating a key historical event that occurred in the year of the age-defining ring from the tree – for example “World War I ends”. The disc is then mounted on to the wall of the space. By the end of the exhibition, all 100 discs will be on view.

Ondák is no stranger to reflecting political history in his shows. For his work Good Feelings in Good Times (2003), first conceived for the Kölnischer Kunstverein in Cologne, Ondák hired people to form a queue in front of the exhibition space. It referenced the artist’s memories of the long lines formed outside grocery shops during the communist era in his native Slovakia. But for this centrepiece at the South London Gallery, titled Event Horizon (2016), Ondák has taken a more subjective route, selecting events in history that he feels are important. It doesn’t matter whether or not you agree with his selection. This is exactly Ondák’s point: his aim is to highlight the impossibility of objectivity with regard to history. It continues his concerns with perception, and how opinions or views can change over time. This is also reflected in the physical change that takes place in the gallery space as the discs are separated from the tree and placed on the wall.

A key theme that runs through Ondák’s work is the experience of growing up. For  Awesome Rules of Language (2016), he has reproduced illustrations from Teaching the Language, a 1960s children’s textbook that he found in a secondhand bookshop. These illustrations discuss various rules and practices for teaching language, social codes and behaviour to children. In Ondák’s work Measuring the Universe (2007), conceived initially at the Pinakothek der Moderne in Munich, museum guards used black marker pens to record, on the museum wall, the names and heights of visitors, and the date of their visit. It referenced the common childhood experience of standing next to a doorframe or wall and having an adult record the increase in your height. For Awesome Rules of Language Ondák invited children local to the gallery to react to the illustrations with their own drawings. One child’s drawing, in particular, catches the eye high up on the centre wall at the back: it says simply “RULES”. The coincidence of Crane, the man who designed the message underneath the South London Gallery floorboards, being pivotal in children’s storytelling combined with Ondák’s interest in childhood experiences is, in short, wonderful.

The passage of time, as is evident in Event Horizon, is fundamental to Ondák’s practice. For his new work Four Moon Phases (2016), he has attached the bowl of a ladle on to four blackboards positioned in sequence to represent the passing of time and the constant oscillation between past and present. This piece could not have been displayed at a better time given the “supermoon” in November that resulted in the largest size of the lunar disc as seen from Earth. Poor visibility deprived Londoners of the chance to see the supermoon, but they do have the opportunity to see something potentially far more illuminating in the main space of the South London Gallery. 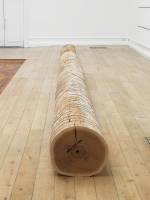