Richard Long: The Time of Space

Richard Long: The Time of Space

Since 1967, Richard Long has used walking as the basis of his artistic practice. What appears in the gallery may be a sculpture constructed from natural materials, a photograph of a sculpture made in situ, or a text, but none of these would be possible without the artist's walks: the experience of time and motion in the landscape finding its mode of expression and memorial.

His most recent exhibition, at the Haunch of Venison gallery in London, is spread over three floors. The first floor displays three photos taken during the course of a 15-day walk in the semi-desert Karoo region of South Africa. 'Flash Flood' proclaims its title over a dark foreground of scrub, while storm clouds sweep dramatically across the ridges - almost a title still from a film. The other two photographs document sculptures Long has created: in 'Karoo Crossing', by scuffing into definition and bordering with stones two meandering and intersecting paths, and in 'Stones and Stars' by setting stones on end on a hillside. Both sculptures seem to have a greater affinity with naturally occurring shapes than with ancient earthworks: the crossing is reminiscent of a microscopic image of a chromosome, while the vertical stones resemble a small colony of cacti growing among other desert plants.

Just before the stairs is the first text piece in the exhibition, 'Walking Music'. This details, in green and orange lettering, six songs, 'In mind each day', as Long walked for six days through Ireland, 'from the Blackwater River to the Burren to the Athenry'. The songs range from the traditional air, 'Roisin Dubh', to Johnny Cash's 'I Still Miss Someone', via the Beatles' cover of 'Rock and Roll Music'. The titles and musicians' details are mysterious, leaving the viewer to guess whether Long tuned in to some psychogeographical resonance that brought the songs spontaneously to mind, or whether he compiled a virtual tape before he set out, and then silently repeated his musical mantra as he walked.

On the first floor, there is another text piece, 'Walking in a Moving World'. Beneath the title are six lines:

They offer an unexpected, Haiku-like opening: the glacial boulder moves as cloud shadows do, and here is Long, the subject, another movement in a moving world.

I wasn't so keen on other textual works in the exhibition. 'From Simplicity to Complexity' lists short words progressing down the wall next to the vertical statement 'A STRAIGHT WALK ACROSS DARTMOOR'. It begins with 'ADRENALIN/HOOFPRINTS/LARKSONG', but soon, generalities start drifting in: 'AN IRON TASTE/SENTIMENT/A SNOOZE/SADNESS/HOT FEET/TUSSOCKS/REGRET'. I would have preferred greater verbal rigour: larksong, an iron taste, tussocks and even hot feet have a certain specificity and power, but not sentiment, sadness and regret. These latter are emotional shorthand, not observation.

Paradoxically, I enjoyed 'Ocean to River' almost in spite of the text. Under the large printed banner of 'OCEAN TO RIVER/WATER TO WATER' was the following small print: 'Atlantic water from the Pointe Espagnole carried across France on a walk of 473 miles in 16 days and poured into the Rhône river at Pougny-Gare at the end of the walk, spring 2005'. Sometimes, Long's actions speak louder than his words.

The top floor of the gallery contains three large sculptures. Standing in front of a piece such as 'Sardinian Cork Arc', looking at the textures and arrangement of the curls of lichen-shaded bark, gives a very immediate pleasure. And yet, these works, constructed from materials very far removed from their source, are somewhat at odds with the rest of Long's practice, which usually involves a minimal disturbance of the environment. The black and white print of 'The Time of Space' illustrates this: it shows a circle of stones on a gentle screen slope, arranged by Long on a three-day walk on Mount Parnassus in 1999. The caption informs us that he dispersed the circle on a six-day walk in 2002, thus creating 'A CIRCLE OF 1,114 DAYS'.

The sense of pilgrimage and isolation within Long's works and walks lend them power, but this is hard to achieve without selectively ignoring human presences in the landscape. So, it was heartening to find, in the text piece 'All Ireland Walk', amusing fragments like 'IT'S GOING TO BE BAD ALL DAY AND TOMORROW', 'FOLLOWED BY A DOG FOR FIVE MILES', and 'PLEASE LOOK FOR A LOOSE HORSE', giving a more balanced sense of a lived-in land. However, I still feel that there's an unresolved tension between Long's solitary walks through remote areas of the planet, and the display of the resultant art in urban centres. These are places polluted and pollinated, compromised and fertilised by just those factors his walking tries to escape: human contact, exchange and exploitation. 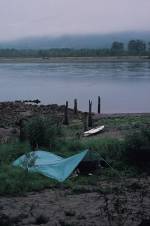