The exhibition at Ben Uri brings together five postwar artists, Joan Eardley, Sheila Fell, Eva Frankfurther, Josef Herman and LS Lowry, all of whom shared a common interest in working people and the underlying human condition

Exhibitions at Ben Uri are reliably educative, offer a historical overview, bring together artists whose work deserves comparison or joint consideration, and provide rigorous yet accessible literature, both on the gallery walls and in the accompanying publications. Refiguring the 50s is no exception. The exhibition collects the work of five figurative painters working in Britain at that time: Joan Eardley (1921-63), Sheila Fell (1931-79), Eva Frankfurther (1930-59), Josef Herman (1911-2000) and LS Lowry (1887-1976). Each is distinctive in his or her style, but a common interest in society, working people as subject matter and the underlying human condition provides a thread that strings the works together and allows the gallery, and curator Sarah MacDougall, to spin a narrative and create a vivid picture of the era and its social change, patchworking together these various viewpoints.

The 50 works on show span the years 1945-64 and include paintings and works on paper from more than 20 lenders, both public and private. The exhibition opens upstairs with a focus on portraiture, showing single portraits by each artist, many sharing a gesture of determination and folded arms, archetypes of male and female workers. Emphasis is placed on the sitters’ huge hands, and those of Herman’s miner are almost like stone carvings – somehow Miró-esque. Portraits were less common in Fell’s practice, although she did make a series of studies of her mother, Ann. Her picture here is of Clifford Rowan, a strong-featured fellow student and lifelong friend, looking down, away from the viewer.

It is Lowry’s Portrait of Ann (1957) that most directly meets the onlooker’s gaze, with wide eyes and red lips, a red roll neck sweater, and perfect facial symmetry, highlighted by the centre parting in her dark hair. When shown at the Royal Academy’s spring exhibition, it caused quite a stir, as audiences were more accustomed to Lowry’s industrial scenes. He claimed that this was the first portrait he had painted for 30 years and that it had been undertaken at the model’s insistence. Attempts to trace “Ann” after the artist’s death have, however, proved fruitless and some have concluded that she was an imaginary figure, possibly combining the features of Fell and Margot Fonteyn.

Frankfurther is described as having an “overriding sympathy for female subjects” and, certainly, humanity exudes from works such as West Indian Waitresses (c1955), depicting migrants at work in the Lyons Corner House at Piccadilly in London, and Couple and Infant (1956), akin to a modern and realistic rendering of a Madonna and Child, imbued with a feminine touch, love, tenderness and humbleness. Her loose brushwork and dry paint scumbling leave the works looking almost like drawn sketches, full of immediacy and presence.

Eardley’s portraits of children are, on the other hand, vivid in their harsh and raw vitality, depicting latchkey kids from the Townhead area of Glasgow, set against graffiti-covered walls. Brother and Sister (1955) captures a poignant moment before the girl was adopted and the siblings were separated for 27 years. The sense of protection felt by the elder brother, as he holds his sister close, is heartbreaking. The scratched and scuffed surface of the painting, and the pentimenti in her pastel and ink drawings downstairs, reflect the poverty of the urban area and the children and the uncertainty concerning their welfare. The scruffiness of the tentative approach to mark-making matches that of the subject. In Baby on Boy’s Knee (1959), hands, once again, are central, symbolising strength and the desire to protect.

Both Frankfurther and Eardley’s children show close observation and real understanding of what it is to be young – none of the mini-adulthood so common in depictions of children throughout art history. The expressions of Frankfurther’s children and their movements are all tender and true, and her Girl with a Teddy Bear and Eardley’s Little Girl with a Squint are both shown sucking their fingers – innocently, naively, and as a childlike form of reassurance and security.

Moving away from the familial, Herman’s empathy lies with the miners of Ystradgynlais in south Wales, whom he portrays heroically, returning home in the evening sun. Despite commiserating with their daily toil and struggle, his paintings depict these men above ground, and thus the focus is on place and surroundings rather than work. Along with Fell, who paints the mining community and timeless landscape of her native Aspatria, his bucolic air contrasts with the urban street scenes of Eardley and Lowry.

Each artist has a strong association with place and for Lowry it is the factories and streets of his industrial hometown of Manchester. Having been painting street scenes for a while already, by the 50s, Lowry’s compositions were becoming smaller and more intimate in scale. He was reducing the surroundings to a minimum and showing the detail of children playing, men loitering, dogs barking – and the detached observer. The notion of the outsider, popularised by Sartre and Camus, is reflected with feeling in his work from this period.

A network of relationships, personal and professional, links the five artists: Herman and Lowry exhibited together in 1943 and 1955 and both were included in a number of important group exhibitions throughout the decade, including John Berger’s seminal 1952 show at the Whitechapel Art Gallery, Looking Forward. Eardley met and was influenced by Herman in wartime Glasgow, and Fell met and was briefly mentored by him in London in the 50s. Lowry attended Fell’s first exhibition and became a lifelong friend. Fell and Frankfurther overlapped at St Martin’s School of Art. Finally, Herman and Frankfurther, both Jewish émigrés, who had fled national socialism, were exhibited together in a group show at Ben Uri in 1956. Sadly, while both male artists lived into their 90th year, each of the three women artists died young (with an average age of less than 40). Until now, the five have never been shown all together.

Working in the postwar period and clearly within the realist tradition, these artists might be linked to the politically conscious social realist painters of the “Kitchen Sink” group (John Bratby, Derrick Greaves, Edward Middleditch and Jack Smith), yet they maintain their own individuality by focusing on the individuality of their subjects, both person and place. Class, gender, ethnicity; feelings of displacement as well as belonging – all aspects are taken into account and handled with pathos, empathy, humour, sensitivity and, above all, dignity. Each artist captures the spirit and body of their subjects and their livelihoods. These artists’ works are studies of humanity and the human condition, which, taken together, portray a realistic portrait of postwar Britain in all its aspects. 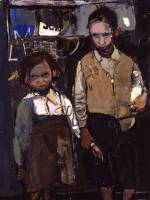 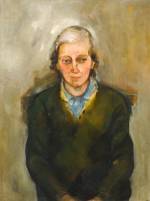 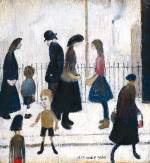 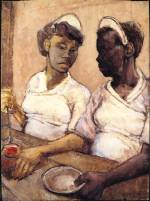 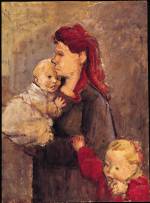