The sculpted bust conveying a real or assumed likeness of a human subject can be said to have fallen out of use today, notwithstanding its long history since at least classical times. The reasons are obvious, given the advance of photography and the vicissitudes of fashion. Celia Scott is a remarkable practitioner of the skill today, with many years of developing her talent. All the more remarkable since her main efforts were directed at her profession as architect. She was not interested in reviving traditional architecture, nor was she susceptible to the blandishments of postmodernism: she was a hard-core modernist, and remains one today, even though her works might suggest otherwise. If there are many perfectible modernisms in a postmodern culture, her grounding in the philosophies of Immanuel Kant and others who formed the basis of modernism and the quest for creative autonomy remained in place and influenced her sculpture.

The current exhibition is entitled Head to Head – appropriately for such a cerebral exercise. The busts stand on individual pedestals bringing their eyes to the eye level of the viewer, and are mostly bronzes from her key period 1983 to 2012, 25 in all. They are set out in two adjoining rectilinear galleries and in the small garden patio beyond. The placing of the individual heads is the key to a better understanding of the process of commissioning and development. They are not portraits of “worthies” in the old Enlightenment manner, nor is there a modernist “serial” or typology.

In the first room, the street window shows individual heads with a “familial” connection to the main players. Immediately lining the opposite wall are three key works – James Stirling, Eduardo Paolozzi and Celia Scott as self-portrait. On either side of the entrance are Sandy Wilson and his wife and partner, MJ Long. Here reality impinges on figurative presence almost as if, knowing them, one was joining a conversation. But no one is talking, except in one’s memory. David Attenborough is at one’s elbow. If one progresses along the same side into the next room one comes head to head with a Ferracotta of architect Terry Farrell. He executed a remarkable conversion for the Dean Gallery, at the National Gallery of Modern Art in Edinburgh, and this work (in bronze) was intended to be placed inside: but that didn’t happen. Maybe it should be installed in the MI6 Headquarters, the building he designed on the Thames? Scott has captured in this head a quality of crumpled benevolence, slightly inscrutable around the eyes. One of Smiley’s people?

On a serious note, these are all heads of real people, and Celia Scott has brilliantly captured their essential characteristics, often in no more than eight sittings. On the opposite side in the second room are the two American architects Richard Meier and Michael Graves, mediated by contemporary “guru” and fellow architect Peter Eisenman, with two further talents either side of him. In the sanctuary of the patio are four key figures: Leon Krier (architect, called here “the Polemicist”) with Alan Colquhoun (architect and critic). Opposite are his former partner John Miller and architect Edward Jones. It was Leon Krier who started the whole sequence with a commission for his own head, now appropriately standing in the Prince of Wales’ garden at Highgrove.

It would be wrong to suggest that Celia Scott pays no regard to the long precedent of the sculpted head. Her head of Alan Colquhoun as an obsessive intellectual was partly inspired by a bust of the Roman senator Seneca.1 One could suggest too that John Cheere’s 18th century bust of Cicero in plaster2 conveys the same quality of intellectual enquiry, of which Scott would have been at least aware. Unlike Rodin, as Colquhoun has pointed out, Scott is not concerned with the quality of “sitelessness”, nor with the embedding of “placedness”, as with works of architecture per se. In this century the time is past when there can be any codification with sculptured busts of the past. The assembled array reveals only discrete individuals, each head and its facial expression is oblivious of its neighbours. Here Scott’s modernist ethos provides consistency and integrity. Colquhoun rightly refers to Scott’s affinity with the late Lucian Freud, who forensically would plot each crease or fold of skin in his model’s physique. Neither Freud nor Scott incorporated any tendency to romanticism, the bane of English modernism. Or any attempt to integrate their individual genre with that romantic past. Scott too knows her method: the measurement of critical points of the head with calipers, recording them on drawings, not photographs. A commitment to total accuracy. And then the distillation of the sense of an individual. Here again Scott is unfailingly accurate about the subject, and perceptive to a degree.

Ten days after the opening there was a “conversazione” of invited individuals to clarify issues which the exhibition had stimulated about the future of the sculpted head. Dr Caroline Vout, Fellow of Christ’s, Cambridge, a classicist and art historian, and Ellis Woodman, editor of Building Design, who acted as chair; with contributions from William Pye (sculptor), Adrian Forty (Professor of Architecture, UCL), David Rowe (brother of Colin Rowe), David Rock (architect) and Robert Maxwell (architect and writer), figures weaving in and out of figureheads. An attempt was made to commit Scott to admit her reliance on precedent, and so on certain presumed connections. Wisely she stood firm.

And so it is, in this most remarkable and original of the summer’s London gallery shows, that the sculptural genre as practiced by Celia Scott can be experienced, a practice that is increasingly attracting attention and offering prospects for a wider future. 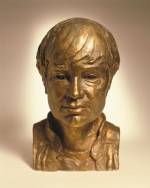 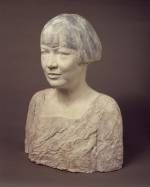 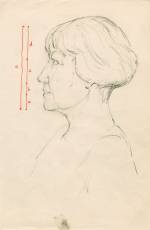 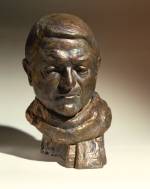 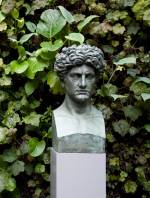 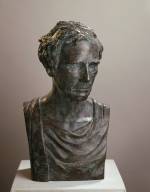 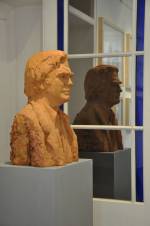 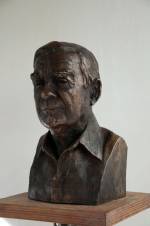 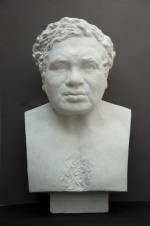 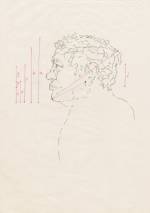 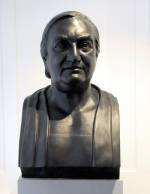