The artist doesn’t want people to make quick judgments on what her works are saying, and the colourful exuberant canvases in this show certainly give plenty to think about 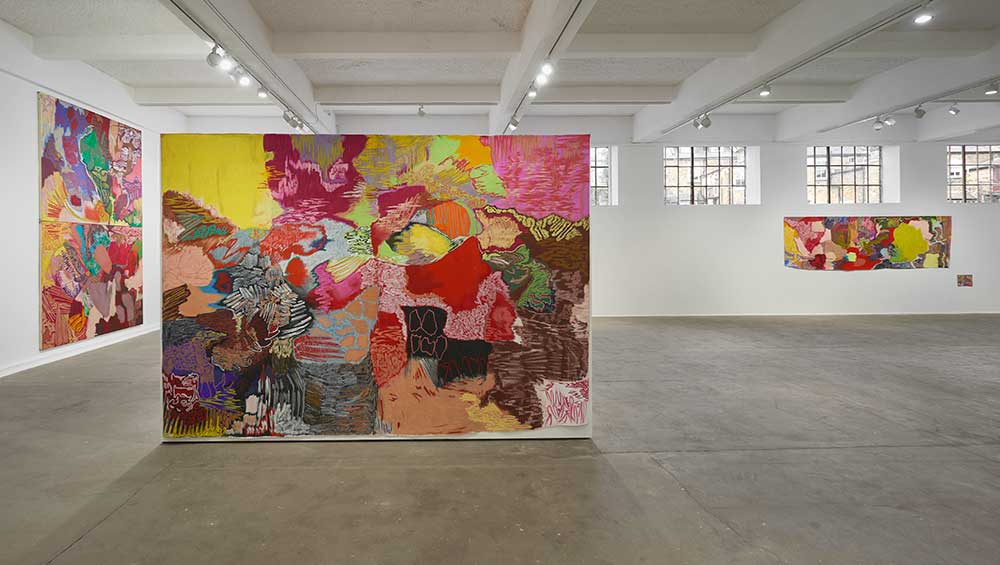 Spending half an hour with the paintings of Rachel Jones (b1991, UK) is like staring at the sun: even hours later, an after-impression of a rich, mosaic of colours, stitched or overlain with jagged marks, lingers behind the eyelid.

“I’m very conscious of the habits that we develop when we look at art,” Jones tells Ellen Greig, Chisenhale Gallery’s former senior curator, in an interview for the exhibition pamphlet. “I’m curious about impulse; that, as viewers, we try to quickly figure out the work … I’m constantly trying to interrupt that weird trap of immediately ‘getting it’.” Well, that disruption worked for me: I left the show not entirely sure whether or not I “got it”, but having thoroughly enjoyed myself regardless.

Jones continues: “In my works I’m trying to push people out of a relatively lateral way of responding to how paintings are shown, how they’re made, and how they’re engaged with.” Responding to them on a purely visceral, visual, instinctive level, it is huge fun to allow your imagination to play across these pulsating surfaces. I had read a lot about Jones’s work being about mouths and teeth, but apart from her trademark scribbles and slashes – which could be seen as “teeth” – that is not what leapt out at me, not with these works anyway, all made during 2021 and this year. 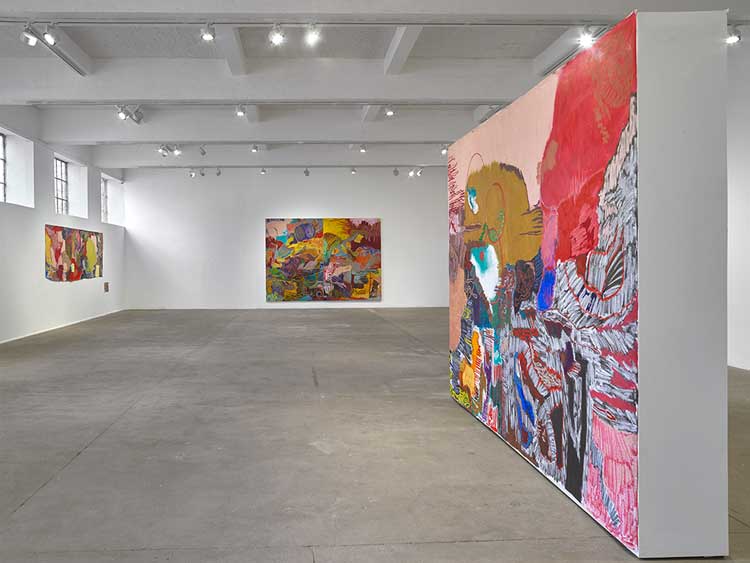 The fact that they are all given the same title, Say Cheeeeese, helps to eliminate any narrative direction. For what it is worth, in the accompanying pamphlet, the works are listed in a clockwise direction as you move around the room. All but one are of a similar scale and made up of pairs of canvases stacked either vertically or horizontally. So, for the first one, placed right in front of the entrance on a freestanding wall, I mainly register the tones: red and pink dominate, with huge fuchsia and vermilion splashes, dashes of lime green and a great, sunshine yellow smear in the top left-hand side. The lower half is more densely and darkly worked in browns, blacks and greys with Jones’s trademark scratchy, scribbling gestures, and just one vibrant patch of cobalt to alleviate the gloom. 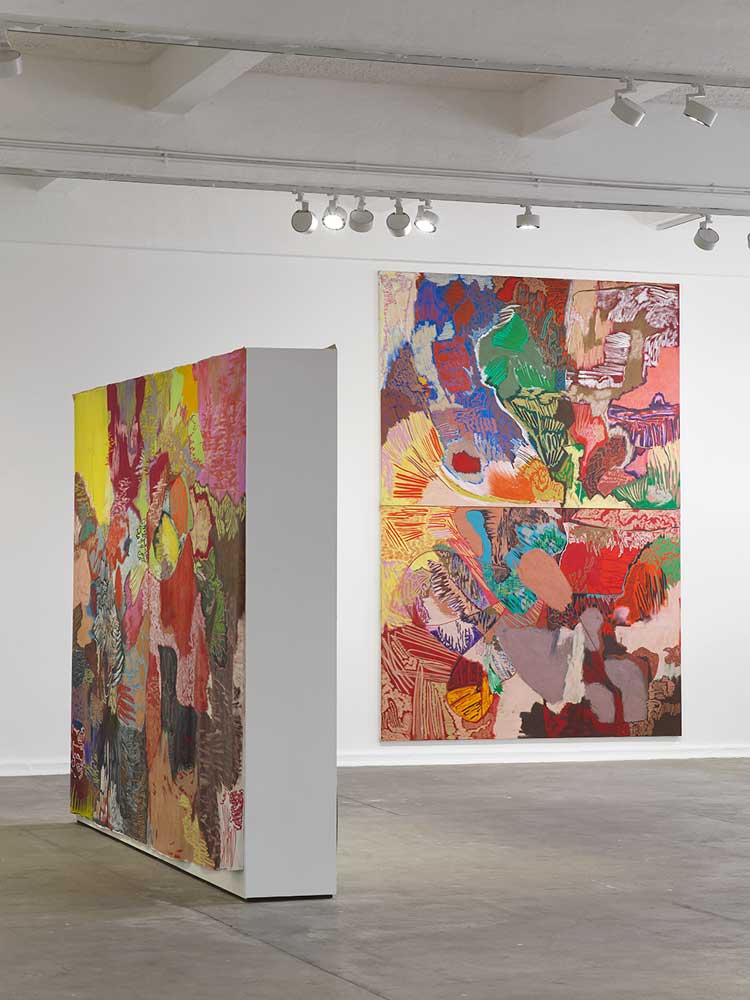 The second work one encounters, moving clockwise to the adjacent wall, is stacked vertically, and features a fan-shaped mark of yellow and orange with red and pink marks scratched across it. The mood is “hot”, with added greens and blues at top left and centre. Do you see the problem? Simply describing the colours and how they are deployed is a real waste of time, about as helpful as using words to describe music. (Interestingly, Jones provides a generous track list to accompany the show, which I failed to access on the link provided in the leaflet, though I did find another recommendation, Trojan Presents: Lovers Rock, on my usual streaming service). 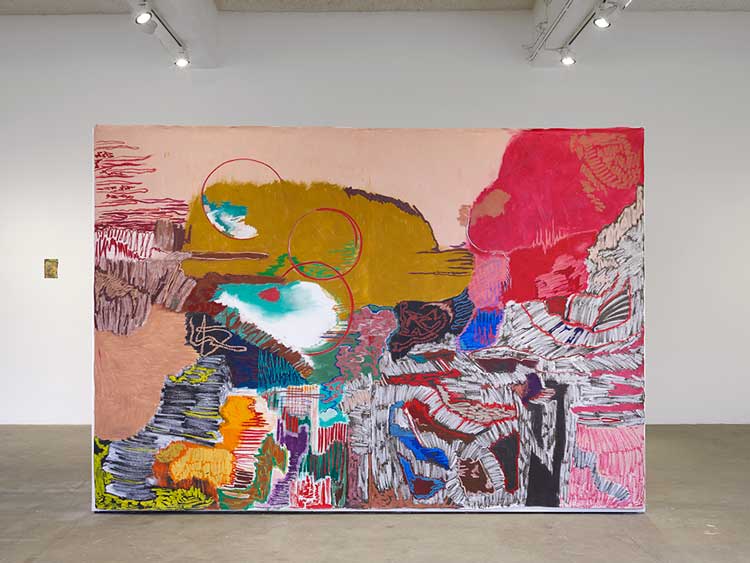 One work – the one on the back of the same freestanding wall that hosts the opening work – did put me in mind of a landscape. There is what could be a pink “sunset” sort of sky across the top left-hand area, a chunk of what could be a sandy land mass in the centre, and a deep “pool” of aquamarine just below that. Those jagged toothmarks crowd in from each side, looking very much like rocks – or they do, according to my coastal landscape fantasy. 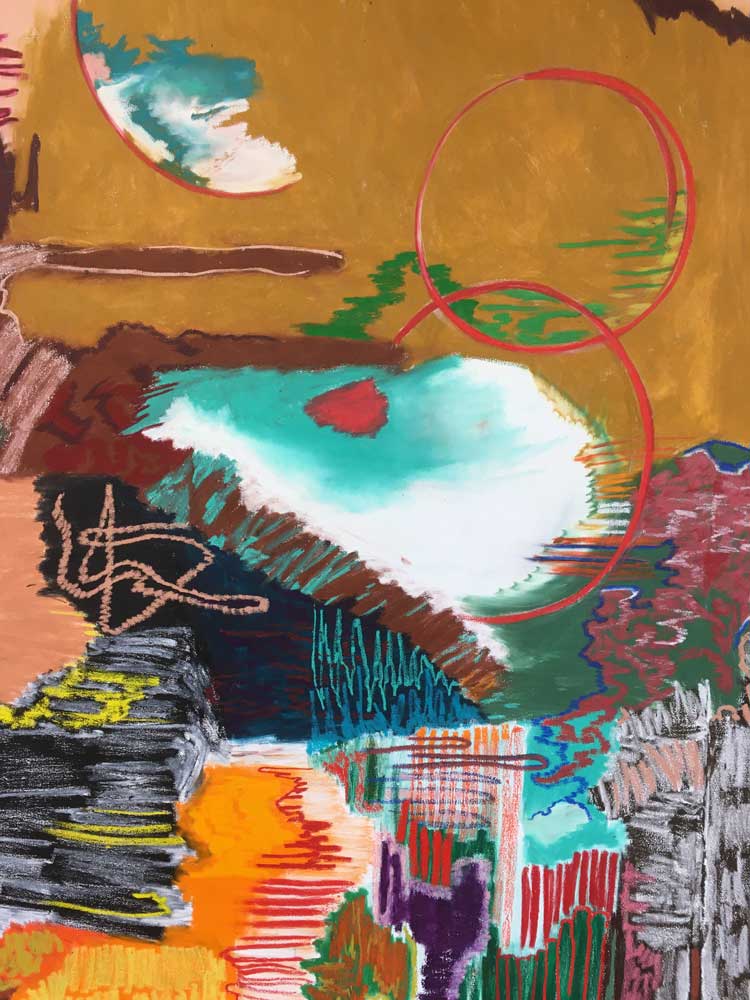 But any thoughts that Jones is representing a landscape (at least an external one – these are all very much about interior landscapes) is eliminated by the presence of three large red circles, like the marks made by spills from a huge coffee mug, across the centre.

I like the way these exuberant works animate this big room, and the fact that Jones insisted that the generous Crittall windows that line the far wall should be revealed – for the first time since the 1980s; they are usually obscured to create a more introverted space for shows. 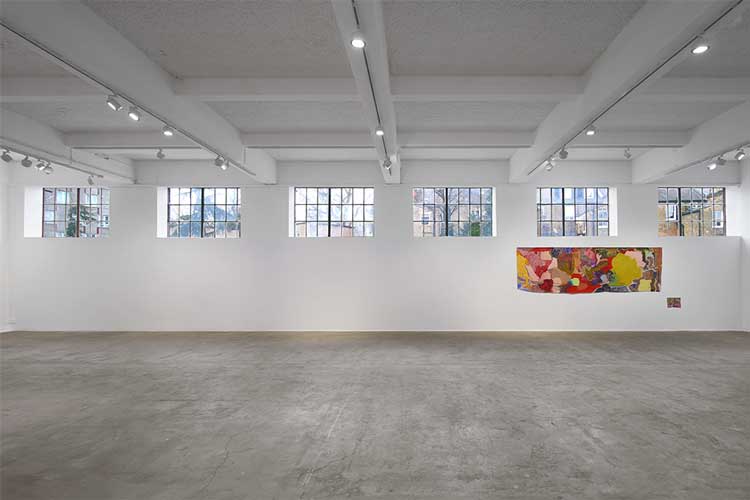 She tells Greig: “Through exposing the windows, I want to reveal and draw from the history of the building. As much as this building has been used by artists, it was also a factory before that. It’s wonky and old; the history and memory of what has happened in this space is inscribed into the surfaces of the building.”

She also wanted the works, and the way they are placed, to pull and push people through the space, and the free-floating wall she has inserted was placed to ensure that, at any point, the viewer can see at least two works at a time. She tells Greig: “My works on canvas can feel ‘rude’ in how ‘loud’ they are. They’re not easy to consume in one go.” In this generous space, I’d say the arrangement is optimal. On a chilly March afternoon, their visual heat and intensity was most welcome. 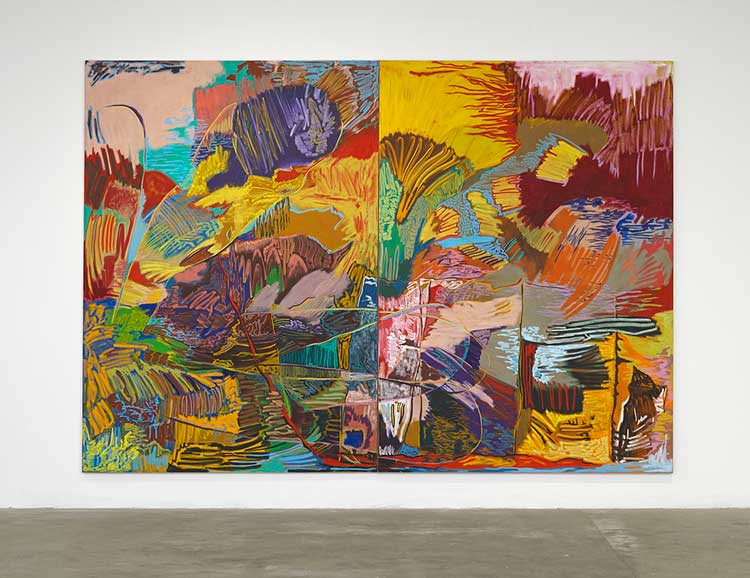 “All the works belong to, and are talking to each other,” she says. “Some are talking louder than others, some have footnotes, others have loud peaks and soft valleys … I hope the elements of dynamism in the paintings also make room for audiences to bring their thoughts, ideas, or reflections to the work.” They absolutely do – but, more to the point, they are compelling and engaging enough, however little direction is given as to their meaning or purpose, that you could imagine really enjoying spending some time with them. For that reason, it is no surprise that Jones – who studied first at Glasgow School of Art and only completed her MA at the Royal Academy in 2019 – is causing a great deal of excitement in the new reappraisal of and celebration of painters and painting; I can see why she was snapped up for representation by Thaddaeus Ropac Gallery, after showing in its group exhibition A Focus on Painting in 2020. 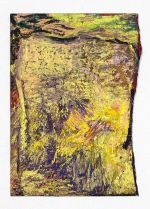