Rachael Louise Bailey – interview: ‘It’s good to work with something that stirs you’

Rachael Louise Bailey – interview: ‘It’s good to work with something that stirs you’

From the synthetic detritus of the oyster industry washed up on the Kent coast and the organic softness of sheep’s fleece, Bailey conjures up fascinating work. She explains what motivates her and how she became obsessed by these two very different materials 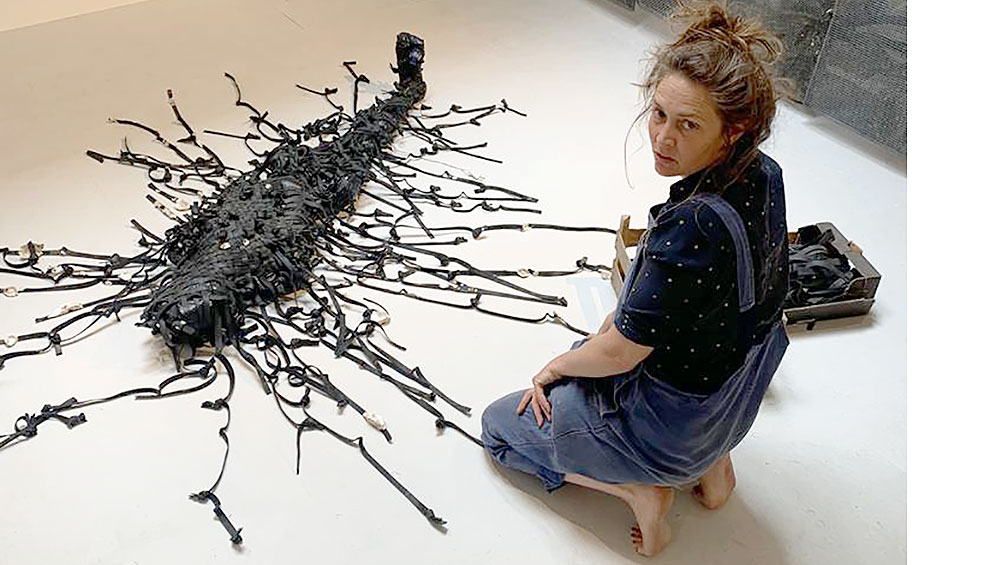 A first-time visitor to Rachael Louise Bailey’s two studios in Kent might be tempted to read her practice as a Manichean opposition between light and dark, good and evil. The first space, in a noisy building of community studios, is cramped, filled with the dark forms of oyster mesh bags and sculptures made from the black rubber bands used to tie down these bags; Bailey has scavenged acres of this oyster-industry waste – what she calls “the black stuff” – and more of it spills out of bin liners on the floor. The other studio space, a former dairy at a now disused farm, is bright, tranquil and airy with a view of the sea, and houses numerous sheep’s fleeces, evidence of Bailey’s recent embrace of wool following a residency in the Outer Hebrides. It is a relief to arrive here and see sunshine pouring in amid the presence of natural matter after the oppressive spectacle of so much synthetic debris. There is, of course, a tension between these materials but it would be a false dichotomy to divide Bailey’s work into “natural equals good” versus “synthetic equals bad”: her sculptures accommodate multiple layers of nuance, and are more about materiality than conveying a message.

“I was drawn towards the natural as a result of having been surrounded by that black stuff for so long that I needed a break from it,” Bailey says, during a visit to her studios in Faversham and outside Seasalter. “Then I got obsessed with the Hebridean sheep, which all have black wool, and that felt like it was lovely and soft and comforting.” But, in fact, when she scratched the surface, Bailey found a wealth of ethical issues around sheep husbandry, in an industry in which profit margins are tight. Her lyrical new show at the Alice Black Gallery in London, Thirst of the Tide 2022, brings together an intriguing range of materials including “the black stuff”, wool, wood and titanium.

The artist’s relationship with the black oyster anchor bands, which are made from the spliced inner tubes of car tyres, began by chance in 2015. Returning from France, where she had been learning direct stone and wood carving at the Ateliers Beaux-Arts Glaciére, Paris, she found herself at a loose end and began wandering along the Kent shoreline. She was appalled by the volume of these black rubber bands tangled up in the seaweed. “I started collecting and my leisurely walk became quite military. As soon as you’re tuned into something, you suddenly see it everywhere. It’s quite obsessive,” she says. She ended up amassing more than 7km (4.3 miles) of the polluting material, which she kept in her garden and began knotting together and wrapping into balls as a way of storing it. 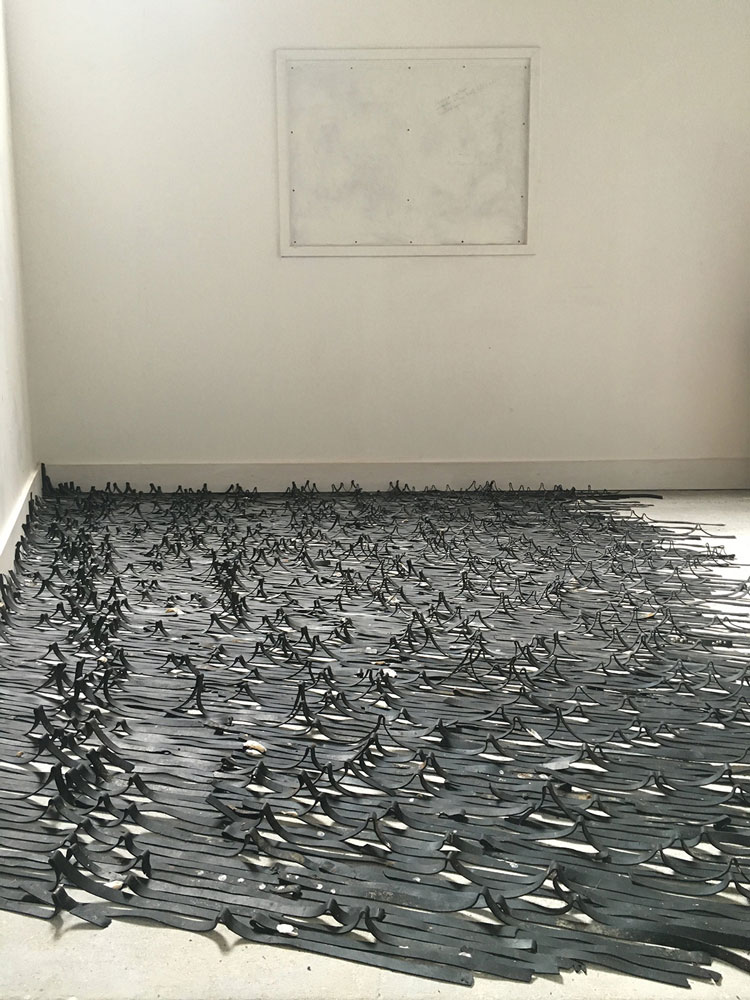 From this process, large-scale installations emerged in a series called The Black Stuff, such as a sea of black bands rising in crests across the floor titled Freedom at Last (2016) – which raises the question of who is being liberated from what? – and Consequence (2016), an ominous, room-size web of black knotted threads, perhaps suggesting a literal or metaphorical trap that humans have created for ourselves. 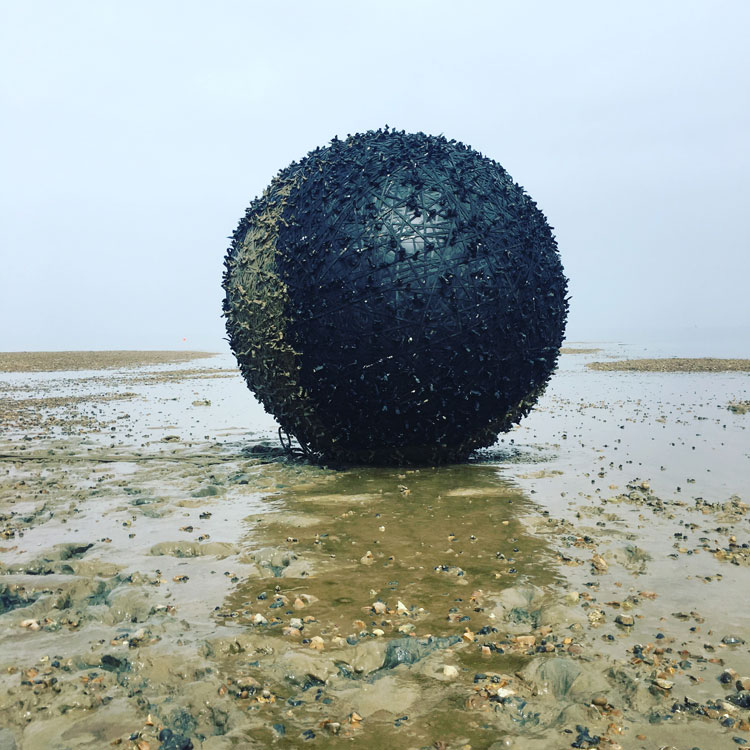 Her best-known work from the Black Stuff series is a monumental, knotted floating orb, which she moored at the beach for a satellite exhibition of the 2018 Whitstable Biennale, provoking the ire of local oyster companies. Titled Global, the sculpture was a literal blot on the horizon, a symbol of unfettered mass production and an environmental timebomb with worldwide reach. It became a local talking point and some people pushed for it to become a permanent fixture, but the two-metre-diameter ball was removed and subsequently acquired by the Fondation Francois Schneider in France. Bailey’s Black Stuff series had repercussions, nonetheless, being cited as evidence in a 2021 regional public enquiry into the environmental hazard of oyster trestles [steel racks on which the oyster-mesh bags are hung].

Although a keen environmentalist, Bailey is understandably wary of the reductive label “eco-artist”. “I’m not saying I have the answers and I’m not pointing fingers,” she notes about her work with the black stuff. “It was a material in my way that shocked me and and I chose to use it. It’s good to work with something that stirs you,” she says. It’s not clear how toxic the oyster industry debris is but she says when she works with it, she gets a particular taste in her mouth. 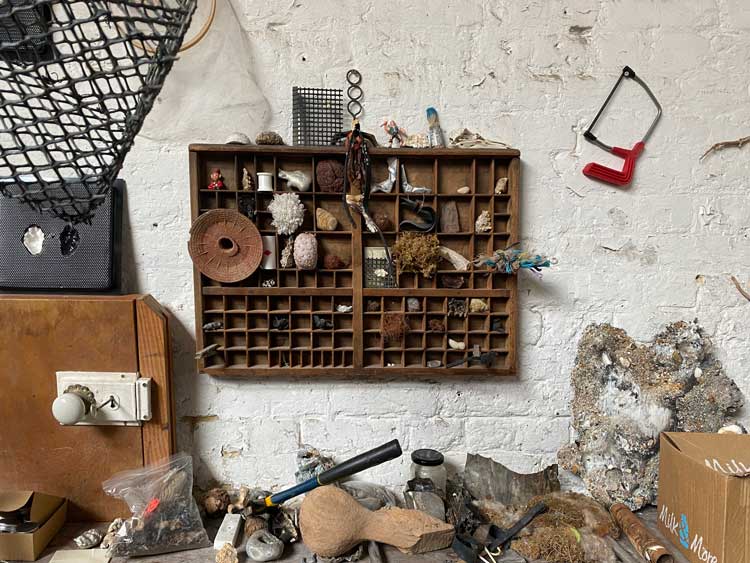 Born in Whitstable in 1975, Bailey grew up combing beaches for odds and ends. She studied graphic arts at Leeds Metropolitan University and later worked in the graphics department at the British Museum. However, she missed being in nature and working with her hands, so she enrolled on a garden design course in France. She soon abandoned this to take up sculpture. Remnants of her training are dotted around her studio, such as several hefty, pointed droplets made of wood that would make a lethal rain shower – perhaps nature’s revenge for all the deforestation inflicted on it. A bank of cubbyholes along one wall serves as a receptacle for curiosities, essentially memories. There is a piece of plastic overgrown with seaweed, a jar of ground-up oysters, a skull – “That was a seagull that I found,” says Bailey. “I just put it in a bucket and waited till it rotted. I just do collect stuff.”


But it is “the black stuff” that dominates the space, casting a heaviness about it. Shrouded in a sheet is Bailey’s sculpture Rest (2019), a body-like form wrapped in black, which she has reworked for the show. The piece originated from the sudden death of a family member. The artist was helping to clear his belongings and was struck by the way his presence lingered on through an array of ordinary possessions that would normally be destined for landfill – a bike helmet, pill packets, a smoke alarm, inhalers, a Father Christmas hat. “We have such a strange relationship with death, as we are obliged to face the overwhelming and often very sudden presence of absence,” says Bailey.  “I think it was just the enormity of this stuff that we all leave behind, the stuff that we think is really important,” she adds.

Bailey drew on her experience of the British Museum’s Egyptian galleries to perform “a kind of mummification”, incorporating the deceased ’s possessions. “I took all these objects and created a skeleton with all the bits,” she says. None of the items is visible, being sealed within: they are simply listed in a text alongside the work, components of an individual portrait. At the same time, the sculpture has a certain universality, evoking different cultural rituals around death and funeral rites, or even bodies washed ashore. Laid out with strands of “the black stuff” haloing it, Rest carries a strong charge.

Besides the bands, the oyster mesh bags have also yielded fruit. Bailey has created geometric sculptures with them that almost have the dizzying effect of op art with their gridded planes. She takes several down from the wall, some still encrusted with oyster shells. “I love the way they play on the eye, the way they move. They look almost organic, which is ironic considering they’re not at all,” she says. “During lockdown, I started making boxes out of them. I guess there was the obvious point that we were all somehow caged in, but they’re just massive things to be put in the sea, aren’t they?”

As compelling and unusual as “the black stuff” is, it is unsurprising that Bailey was attracted to wool after years of handling the marine pollutants. The shift was prompted by her 2019 residency in the Outer Hebrides, and she began collecting fleeces. On the former farm where she has her second studio, a storage space is overrun with brown and white fleeces bulging from bags or tumbling in woolly cascades from a laundry line. The brown ones have been sent from the Hebrides and Orkney and the white local fleeces she rescued from being burned due to low wool prices. During the Covid pandemic, Bailey spent time washing the fleeces and learning to spin wool on a wheel. “A lot of my work is highly personal in relation to my family,” she says. “The link that I found in the Outer Hebrides was that it was a family-based world, they’ve been there for years and years and they’ve passed their croft on for generations. I think I was linking it back to my grandparents, knowing my grandmother used to pick wool off fences here in Kent and wash it and spin it.”

Bailey’s practice is guided by considerations of form, texture and matter, as well as an interest in working with found materials. “I feel the departure point of the work was stuff found that’s been regurgitated by the tide,” she says, speaking about her show at Alice Black. Hence the exhibition’s title Thirst of the Tide, which conveys the idea of an insatiable sea that swallows up objects in its path and spits them out, while also encapsulating the paradox of water and thirst together. Bailey belongs to a tradition of artists who discover gems in what others discard, and cites Ursula von Rydingsvard, Cornelia Parker and Giuseppe Penone among her inspirations.

When we visit her second studio space, a giant metal circular ring stands in the centre, her latest trophy from the scrapheap. It turns out to be the fan casing for a Rolls Royce aeroplane engine, made from titanium. She had been looking for a circular structure for her show at Alice Black, she says, so her find felt serendipitous. Her plan, set out in a diagram on the wall, was to exhibit the engine casing alongside her sculpture Rest, an old farm gate she located on eBay, an expanse of dead ivy vine from her father’s home, a wall of oyster bags and lots of sheep fleeces. The combination of these items may seem random to the viewer yet Bailey’s juxtapositions achieve a poetic harmony. In her mind they are connected by loose threads of association that have a personal logic, but she notes: “I don’t want to put that in the brain of someone else.”