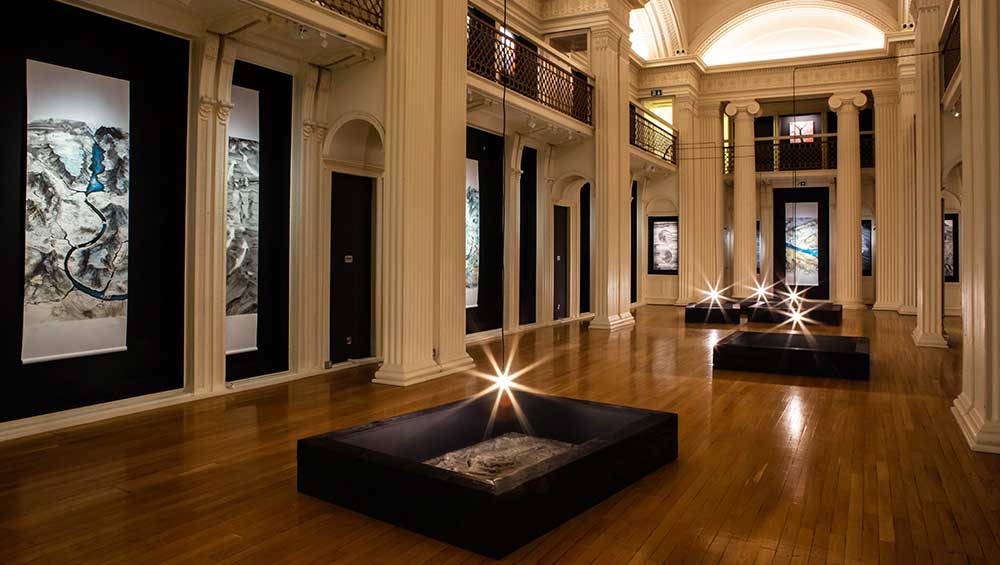 There is something oddly natural about crossing a bridge of ships from “Attack by fire” to “Temporizing ground”. Yet explaining the seamless replacement of what would be place names with military stratagems is not as simple as we might imagine. For the more one lingers on Qiu Zhijie’s ink wash and calligraphic map painting, The Art of War (2022) – in my case, using a UV pen to bring out the English translation of the Chinese calligraphy – the more it feels that the labels are not supposed to be read literally. Rather than lay out strategies, they seem to suggest possibilities. Or perhaps the work is not meant to be used in any straightforwardly didactic way. 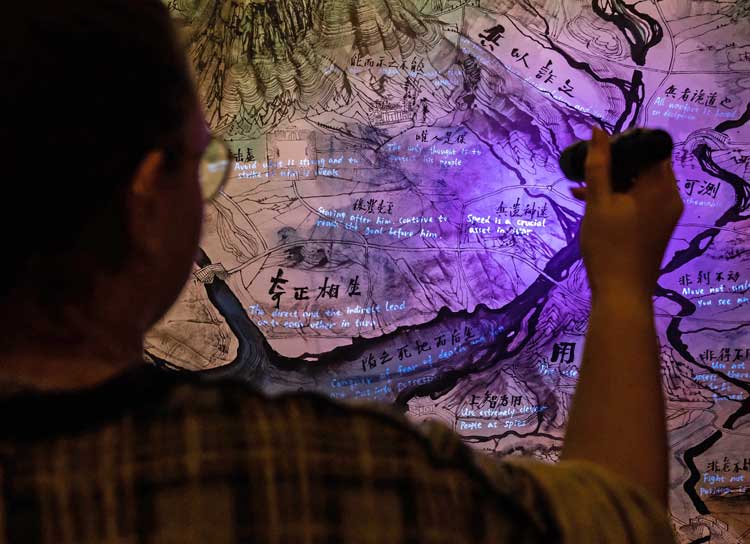 I could continue my path down the shore to “Narrow passes”, which makes half sense with the road winding round the mountain next to it – although the map has many similar roads with “names” varying from “Wind” to “Take care of your men and camp on hard ground” – and along this road to “Entangling ground”, a small, tucked-away plain. But because I am struggling to see the connection between what I am reading and what I am seeing (I am no military strategist), I seek further instruction from the military general and strategist Sun Tzu (544-496BC), from whose ancient book the painting takes its title. Yet the concepts in this book, many of which the map reiterates verbatim, extend but do not clarify my reading of it. 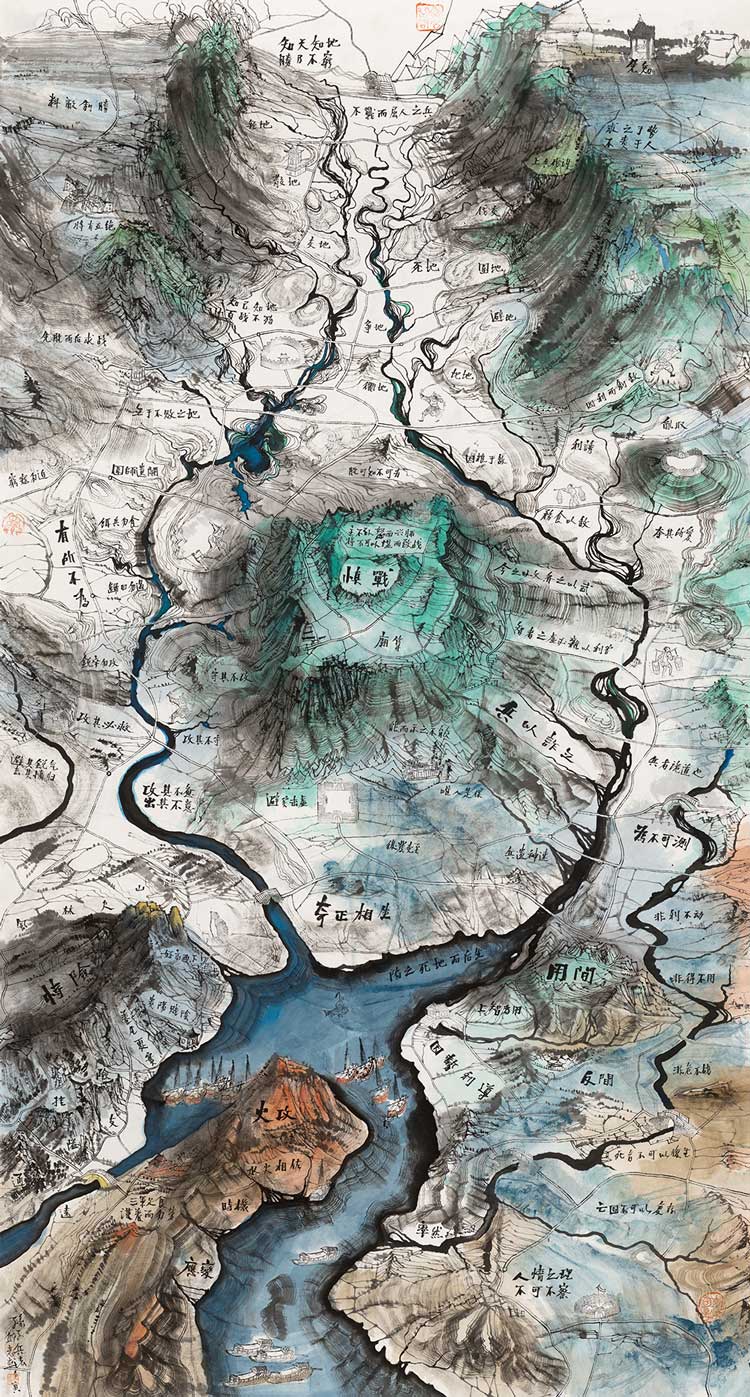 The Art of War is part of a series of six new map paintings on scrolls (all drawn from Chinese military treatises) inserted into niches in the neoclassical Talbot Rice Gallery in Edinburgh. Joined by three new series interspersed between columns and pilasters, the maps culturally contrast with and yet proportionally accommodate – without fully bending to – William Henry Playfair’s temple-like room. Walking a tightrope between spontaneity and deliberation, each map so beguiling, so virtuosic, that even if we question what we find, we don’t question that it should be there. Three Flat-Topped Hills: At Dusk (2022), for instance, includes a wetland called Suggestion from Gods, across a bulging inky river from which is a patch of green called Homesick. These terms could be geographic – by way of origin myths and the sense of being away from home – but by no means necessarily so. Qiu puts them in a wildly coloured landscape so that we feel them in swirling, throbbing relation to each other. What meaning we give to such animation is an open-ended matter. 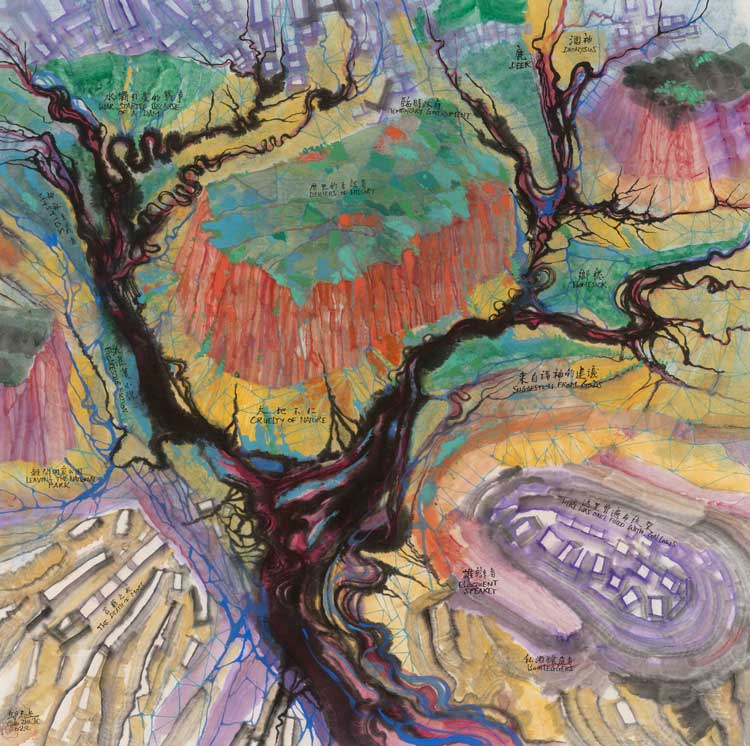 The knowledge in Qiu’s paintings is not only cerebral but kinaesthetic, or bodily. He honed his craft via the arduous pedagogical process of copying and repetition. Monitoring one’s breath is fundamental, a practice to which Qiu gives primacy in his series of wordless monochromatic paintings, Forms of Meditation (all 2022), comprising dunelike terrains (somewhere between landscapes and maps, often including a horizon line) born of a rhythmic to-ing and fro-ing that suffuses them with a colossal calm. Perhaps due to this embodied epistemology – uniting the conceptual with the painterly, the painterly with the calligraphic and back again, all intertwined with the topographical imagination – it seems the words were always supposed to be where they are. The colours in Three Flat-Topped Hills: At Dusk, and The Colour Experiments Series (2022), of which it is a part, are inspired by the chromatic representation of data by remote-sensing technology used to chart the radiation given off by the landscape, thus aligning body and breath with today’s most state-of-the-art – and disembodied – cartography. Qiu’s practice is not about conservative nostalgia or luddism; he repurposes ancient methods to attune the body to digital-age sensorial schema.

If the paintings resist easy decoding, it is because the terrain is telling us not to draw connections in any obvious or reductive way, but to conspire with these environments and ideas openly and haptically. In Purple River: The Interpretation of Dreams (2022), one could swim from the beach of Fear to the islet of Forget. But the dazzling experience of the journey overwhelms any strategic map-reading: these are maps for getting lost in. We swim as we plan, and since this process goes both ways, we zoom out and contemplate the link between fear and forgetting and if we really want to be on that islet. Qiu’s subjectivity proffers itself as a space in which to navigate our own. 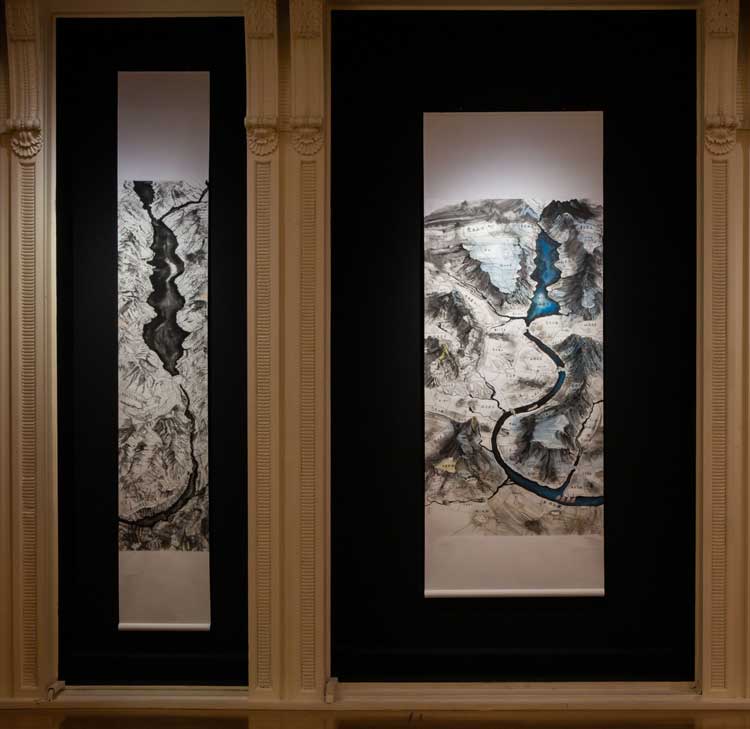 The same can be said for his more politically themed works, which are indirectly subversive. For they refuse to subvert or conform in any obvious way while providing the framework for subversive or conformist thinking, or a combination of the two – that unnerving combination of freedom, wisdom and opacity. Under the Sky I (2022), a black-and-white painting of a vast mountain reservoir named Leviathan, surrounding which are other mythic lands (El Dorado, Kalapa), includes among them the plain of Frankenstein, because like the places on this map, the monster (who colloquially takes the name of its maker) is a human invention. If this sounds benign, more ambiguous is the inclusion of Pakistan, closest to Frankenstein. Could this be implying that Pakistan – a state “invented” by the British government and the Muslim League in 1947 – is monstrous? Is it critiquing the quixotic idealism that characterises much postcolonial state-formation? If so, are we meant to feel sympathy (as the reader of Mary Shelley’s novel does) or horror? Instead of giving us answers, the work invites us to ruminate on the set of concepts it presents. Being tizhinei – “within the system,” as a lecturer at the Central Academy of Fine Arts in Beijing – Qiu might work within strict confines, yet by being intently elusive, he has reclaimed this political space for himself.

Fingertip encyclopaedism has made us so accustomed to the interconnectedness of everything, while also turning ideas into dead denotations, words we can look up defined overwhelmingly by their deceptively automatic connectivity with other words. Qiu wants us to engage with the substance of these linkages; to acknowledge the myriad, shifting possibilities offered, connotatively, by landscape – not in the sense of the sublime, which is a force beyond possibility, but something that can be practicably harnessed, discussed, worked and walked through. As Qiu has explained, the Chinese use the same character (dao) for speaking as for road; both Martin Heidegger and Ludwig Wittgenstein spoke of the divergencies of language as “paths”, things to be walked. This is not just mapping as thinking, but mapping as language, and language and thinking as movement. Hence, in Qiu’s work, there seems to be a bargaining of control between the landscape that forms on the paper and the hand that forms it – who or what is leading? Does the word or the river come first? 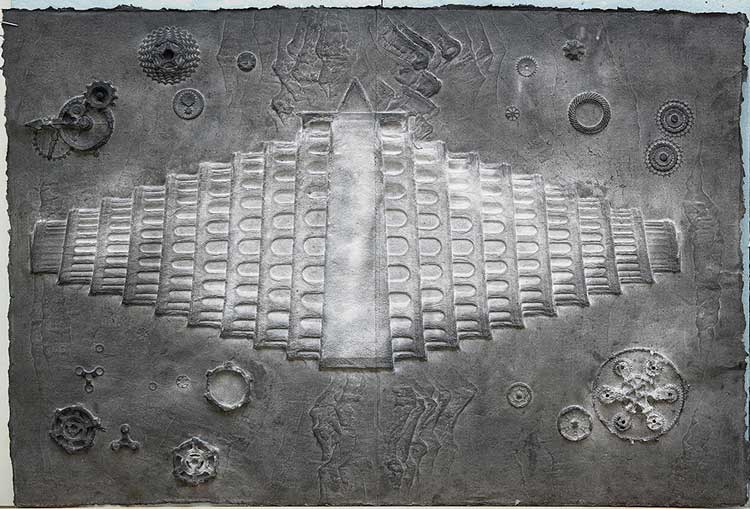 Mirroring, or catalysing, our bodily engagement with the works are five paper reliefs (all 2016), cordoned off in wooden rectangles on the floor to resemble archaeological digs. These works do not include words as such, but they appeal to the faculty of recognition and so we interpret them linguistically as we physically circumnavigate them. Indeed, Empire Series: Babylon Tower contains the eponymous structure (also known as the Tower of Babel), used in the Book of Genesis to explain why we speak different languages. The myth also warns against the hubris of monumentality, and it is hard not to see a dialogue of sorts with the ideas represented by the exhibition space. Thinking and walking, I begin to imagine the words Vitruvius, Ionic Column and Scottish Enlightenment floating about the room. The digs are thematically exclusive – one contains human bones, another crab-shaped objects, from actual crabs to a spacecraft from Star Wars – performing a literalised archaeology of knowledge to say that categorisation and interconnectivity are, after all, deeply embedded in space, in terrain, which in Qiu’s world is also consciousness. 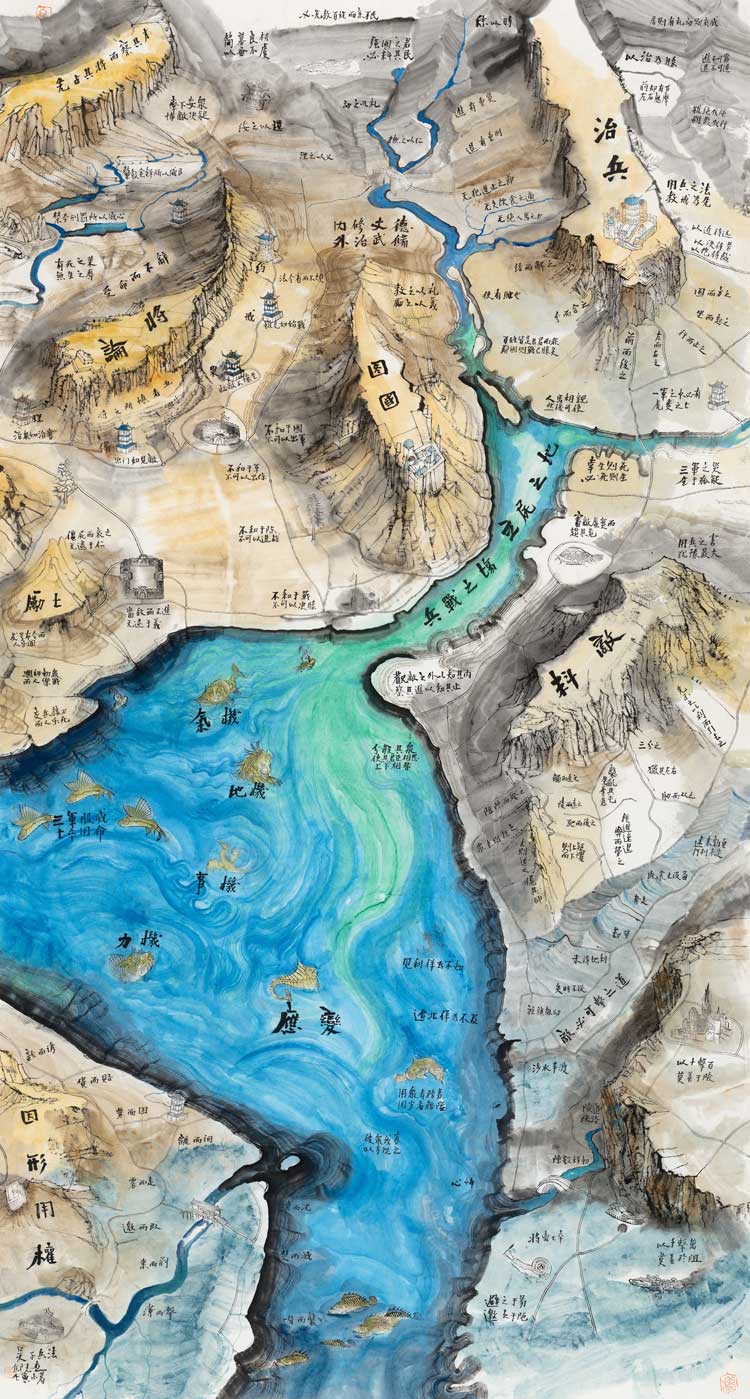 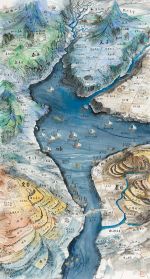 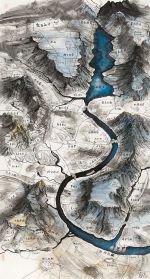 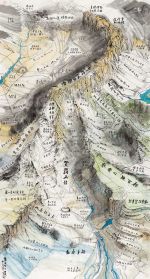 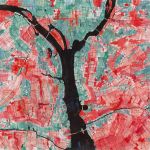