Portrait of the Artist: Käthe Kollwitz

Portrait of the Artist: Käthe Kollwitz

Celebrated in her native Germany, Käthe Kollwitz, born 150 years ago this year, is sadly little known in the UK, but this well-selected touring exhibition of nearly 40 of her prints seeks to put this oversight to rights 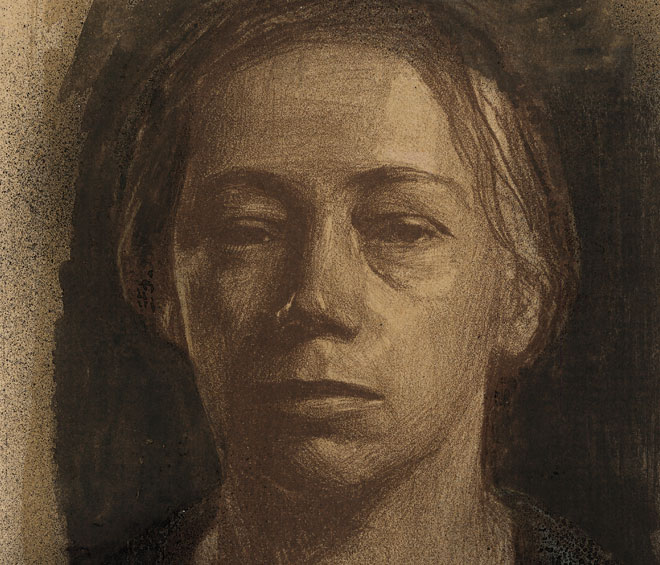 Käthe Kollwitz. Self Portrait, 1904 (detail). Lithograph. © The Trustees of the British Museum.

“I was determined to be an artist from the outset, even though I had the disadvantage of being a girl.”1

Her gender was not Käthe Kollwitz’s only disadvantage as a graphic artist (at a time when this was the least prized – and least well paid for – of the visual arts), living in the “bohemian” workers’ district of Prenzlauer Berg, Berlin, and surviving two world wars. This aside, she enjoyed, from the outset, the support of her family, husband and friends. Thanks to this, her determination, and, in no small measure, her talent, Kollwitz (1867-1945) met with great success. Today, she has four museums dedicated solely to her work and, in her native Germany, there are 40 schools that bear her name. In 1920, she became the first woman to be elected to the Prussian Academy of Arts, an honour that brought with it a full professorship, albeit that she rejected the title owing to her communist leaning for egalitarianism. Her work was shown in New York in 1922, she was the subject of many books and articles, and the first big monograph on her work was published as early as 1923. Despite her prints being widely reproduced in China and Russia, she is sadly little known in the UK, where only three of her drawings – and not all that many of her prints – are held in public collections. This enlightening and carefully selected exhibition has been put together in collaboration with the British Museum – comprising 36 works from its collection, plus four loans – by Frances Carey, the former deputy keeper of prints and drawings. Marking the 150th anniversary of Kollwitz’s birth, it will tour to the Young Gallery, Salisbury; the Glynn Vivian Art Gallery, Swansea; the Ferens Art Gallery, Hull; and end up “home” at the British Museum in 2019.

Käthe Kollwitz. Mother with Child in Her Arms, 1910. Etching. © The Trustees of the British Museum.

Even as a child, Kollwitz struggled with depressive episodes, and her art is as bleak as it is intense, incredibly powerful and full of despair – only one work in this exhibition, Mother with a Child on her Arm (1910), bears the trace of a smile on the woman’s lips. Kollwitz’s art deals with themes of power, politics and social reality, not shying away from the larger questions of life and death. When her husband, a doctor, was treating patients from the poor workers’ districts of Berlin, Kollwitz would draw the women with their careworn faces and expressions of consternation. Her first successful series, A Weavers’ Revolt (1893-97), was loosely based on Gerhart Hauptmann’s drama The Weavers, ostensibly about the failed revolt of Silesian weavers against increasing mechanisation in 1844. Although Kollwitz’s prints were not made as illustrations for Hauptmann’s work, she invited him to look at them. He was disappointed, seeing nothing in them of his own work. Whereas Hauptmann wrote a happy ending for his drama, with the ultimate triumph of the weavers, Kollwitz emphasised the absolute, harsh and continuing bleakness of their situation, focusing on their psychological suffering. When the works were exhibited at the Great Berlin Art Exhibition in the summer of 1898, the jury wanted to award her the small gold medal, but the minister of culture advised Kaiser Wilhelm II: “In view of the subject of the work, and of its naturalistic execution, entirely lacking in mitigating or conciliatory elements, I do not believe that I can recommend it for explicit recommendation by the state.”2 Of the six plates in the series, the British Museum owns one lithograph and two etchings, all three of which are on show here, alongside a fourth rejected plate, originally intended as the conclusion. Need (1893-97) captures the desperation of destitution, with a grieving mother, head in hands, bent over the bed of her faceless (and presumably dead or dying) child. 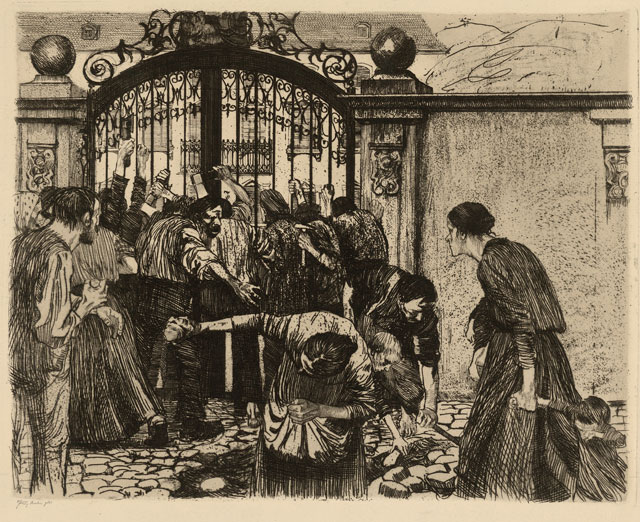 Another impactful series, again where Kollwitz employed history to speak of current political events, was Peasants’ War (1904-08), based on a violent revolution – the first instance of class struggle in Germany – which took place in the early years of the Reformation, beginning in 1525. When Kollwitz made these prints, the Social Democrats were the largest political party in the world, but, under Kaiser Wilhelm and his adviser Otto von Bismarck, society remained restrictive and authoritarian. It took a lot of courage to speak out, but speak out Kollwitz did. One etching, Raped (1907-08), as its title suggests, shows a woman lying amid broken flowers, her legs spread, made all the more upsetting for the face of a young child looking down on her mother’s violated body.

Käthe Kollwitz. Unemployment, 1909. Etching and engraving. © The Trustees of the British Museum.

The first room of the exhibition presents eight self-portraits, ranging from a two-colour brush and pen lithograph from 1901 to The Call of Death, part of a portfolio on the subject, from 1937. Hailing from Königsberg (now Kaliningrad), in what was then the very far east of Germany, an enclave between Lithuania and Poland, on the border with Russia, Kollwitz is easily recognisable in her self-portraits, with her striking Slavic features brought out all the more by her use of strong lines and the stark contrast of black and white. The repeated motif of a face emerging from darkness is also suggestive of the depression she battled. The title of the exhibition is Portrait of the Artist, and, as well as these self-portraits, the catalogue draws heavily on her diaries and letters (published posthumously, edited by her son Hans).

The predominant theme of Kollwitz’s work, from early on, however, is that of the grieving mother, and the most elemental series on this subject is Woman with Dead Child (1903), four works from which are on show here. The studies were made of herself, in front of the mirror, with her seven-year-old son Peter lain across her lap. Her two sons meant the world to Kollwitz and Peter’s death, 11 years later, in the first world war, affected her for the rest of her life. She ultimately sculpted a memorial to him, The Grieving Parents (1932), which was originally sited in the Belgian cemetery of Roggevelde and later moved, along with Peter’s grave, to the nearby Vladslo German war cemetery. Her sculptural Pietà (1937-39) was selected in 1993 by the Chancellor Helmut Kohl to be enlarged and placed as a memorial to victims of war and tyranny at the centre of the Neue Wache on Unter den Linden, Berlin. Sculpture was hugely important to Kollwitz and her prints and drawings became increasingly sculptural throughout her life.

Käthe Kollwitz. Self Portrait, 1924. Woodcut. © The Trustees of the British Museum.

The mother in the etchings included here looks almost simian, and Kollwitz is known to have spent time observing the monkeys in Berlin zoo. The primate-like features also appear in her thronging crowds, in works such as Charge (1902-03), where they highlight the animalism and inhumanity of poverty and war, and of the conditions in which the subjects of Kollwitz’s work fought to survive. The contemporary description of her work as “the experience of a form of humanity, not just an animalism”3 is therefore both fitting and contrary. A better translation of the original German “Menschlichkeit” might rather be “humanness” – referencing the basic survival instinct necessary to get by in the social realities of her time. Kollwitz spoke often of eliminating feelings from her work so as to better portray reality. Looking at her prints now, however, they are so full of feeling and expressive bursts of emotion that this is a hard circle to square. Except perhaps it is not, for her depictions of mother and child were not made out of any mawkish sentimentality for herself as a mother, rather they sought to reflect the high incidence of child mortality around her. By suppressing her own emotional response to the horrors with which she was surrounded, Kollwitz was able to represent them in a timeless manner, documenting not only her own times, but speaking both backwards and forwards, to history and to time yet to come. May her dark forebodings and foreseeing of death and loss, resonant as they are today, not come to fruition once more in our own lifetime …

• The exhibition is accompanied in the gallery’s resource room by a short film clip, Schaffende Hände (1924) by Hans Cürlis, showing Kollwitz at work. This is the only film footage of Kollwitz in existence and should not be missed. 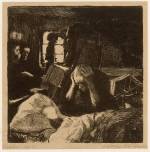