The 19 artists in this exhibition use photography, video, installation, sculpture and painting in a timely reminder of the injustices faced by oppressed people across the world 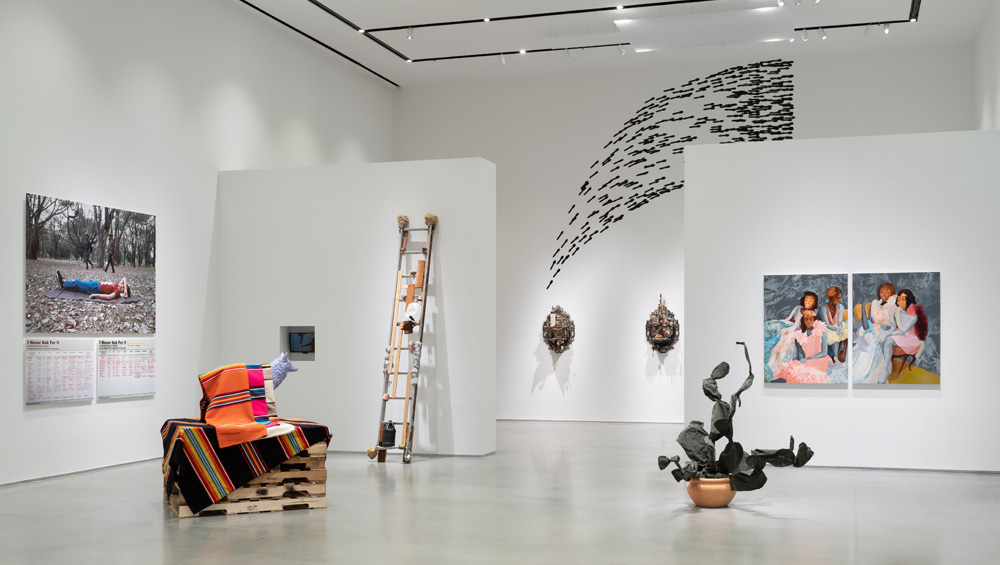 Perilous Bodies is the first of a trio of exhibitions, based on the theme of Utopian Imagination and curated by Jaishri Abichandani and Natasha Becker, inaugurating the new Ford Foundation Gallery, part of the renovation of the foundation’s landmark mid-1960s building. The 19 participating artists, some names more familiar than others and mostly based in the US, are from diverse cultural backgrounds. Many are also from conflict zones. Their practices range from photography to video, installation, sculpture and painting, with a commissioned performance by the American artist Vanessa German. Addressing the imperilled condition of peoples globally with deep, at times fierce, empathy and arresting imagery, the many issues Perilous Bodies touches on are both a plus and a minus – the range of injustices evoked blunt the show’s impact somewhat even as it tells us how important it is to not forget the many forms injustice assumes in today’s world. 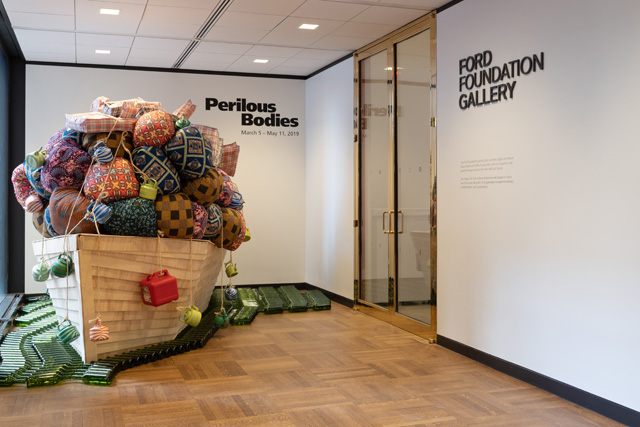 The first work the viewer encounters is Road to Exile (2018) by Paris-based Cameroonian sculptor Barthélémy Toguo (b1967). Strategically set outside the entrance to the gallery, the flimsy, 10ft (3 metre) wooden boat is piled high with bundles made from brightly coloured African fabrics, its sides strung with bottles and containers. It instantly summons up the unseaworthy, overburdened vessels depended on by countless asylum seekers hoping to escape the horrors of homelands ravaged by endless war: the bundles, poignantly displacing the boat’s human inhabitants, are often all that remain of disrupted lives.

Another artist whose work disturbingly evokes our daily news cycles – as all these works do – is Mahwish Chishty (b1980, Pakistan). Hundreds of her black, cast-foam facsimiles of Hellfire II air-to-ground missiles (a favourite of the US military, developed for their precision) are hung high overhead, and are deceptively, ironically, beautiful to see, like the flight of soaring birds, belying the devastating – and imprecise – damage they wreak without distinction on militants and local populations alike. 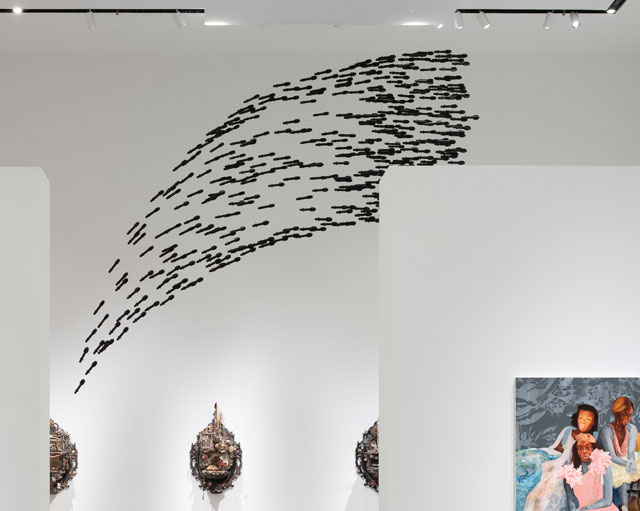 Finding One’s Shadow in Ruins and Rubble (2014) by Tiffany Chung (b1969, Vietnam) is another installation about the consequences of bombings and the damages inflicted on the victims of such acts. A well-known artist, who shows often in New York, Chung’s contribution is an elegant minimalist-like arrangement of multiple light boxes illuminating found photographs of destroyed apartment houses and laid out in rows like a city in miniature. The scale and elegance mask, for a moment, the scenes of trauma leading to personal and sociopolitical shifts, to displacement, migration and loss, Chung’s perennial subjects. 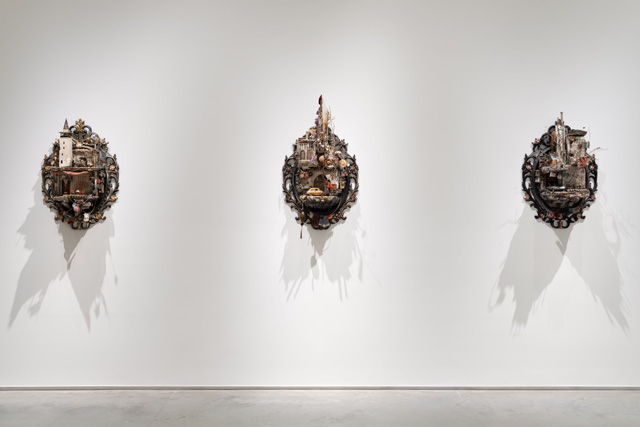 The Syrian architect and artist Mohamad Hafez (b1984, Damascus) also uses miniaturisation to explore the dissonance between format and content, as past and present, memory and reality collide. His recollections of Damascus and its beloved neighbourhoods are commemorated here in his Damascene Athan series (2017). Using ornate frames stripped of their mirrors to enclose his cunningly constructed reliefs, the appealing replicated facades and streets tap contradictory reflections and reactions, heavily dosed with nostalgia and wishful thinking, hope and despair. Darker aspects of life in Syria in the aftermath of the Arab spring are also encoded within these tableaux. (The presence of the Syrian secret police, for instance, is signalled by a seemingly innocuous Toyota truck, its vehicle of choice.) 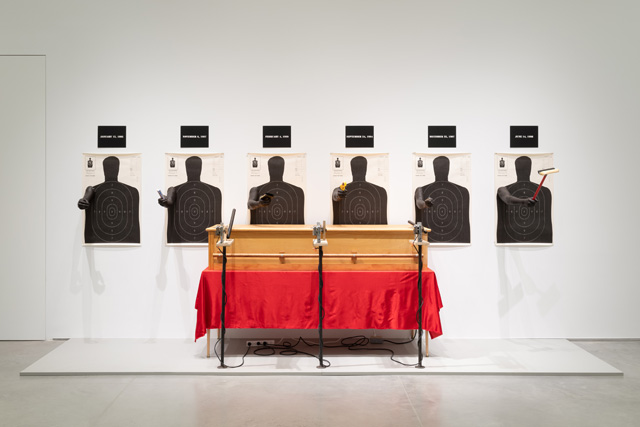 Closer to home is the project by Dread Scott (b1965). A well-known artist and activist since his student days in Chicago, he weighs in at this exhibition with his Blue Wall of Violence (1999), a subject that is still topical today: police brutality against African Americans. Here, he refers to those who were mistakenly believed to be wielding dangerous weapons, placing the harmless object they actually held – house keys, a wallet, a candy bar – in the outstretched cast hand extending from targets of silhouetted human forms used for shooting practice – representing six black men who had been killed by the police in the 1990s. There is a coffin in front of the targets, struck like a drum by police batons every 10 seconds. It makes its point without nuance, but the fatalities are also without nuance. 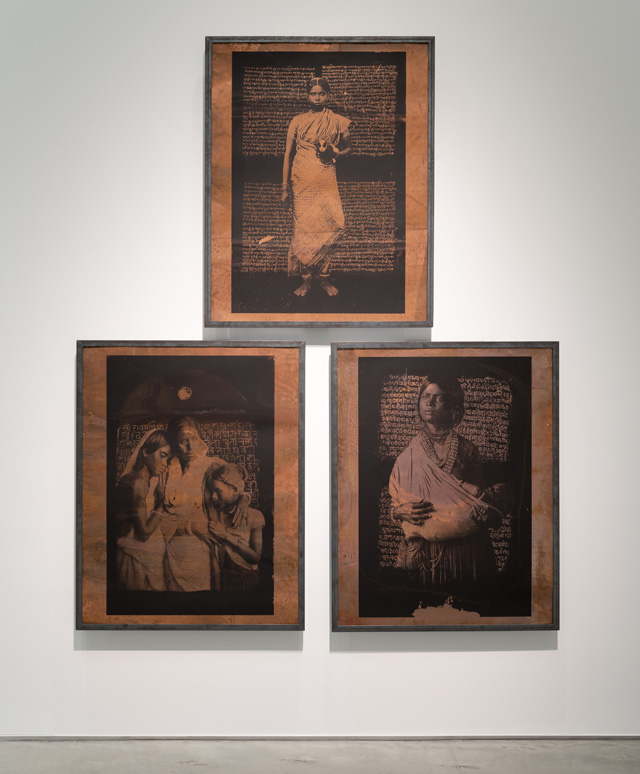 Less known is the work of Thenmozhi Soundararajan, a Dalit rights activist, filmmaker and multidisciplinary artist who is based in the US. She is a tireless – and fearless – advocate for women of colour, and compellingly addresses the divisive issue of caste discrimination in India and within the Indian diaspora. In Ama, Amachi, and Mother. We Are Still Here (2019), she presents three images of women and their children, in enlarged, vintage-looking representations on copper plates, who function as a kind of silent, sombre rebuke, a testament to the too-long overlooked and undefended. 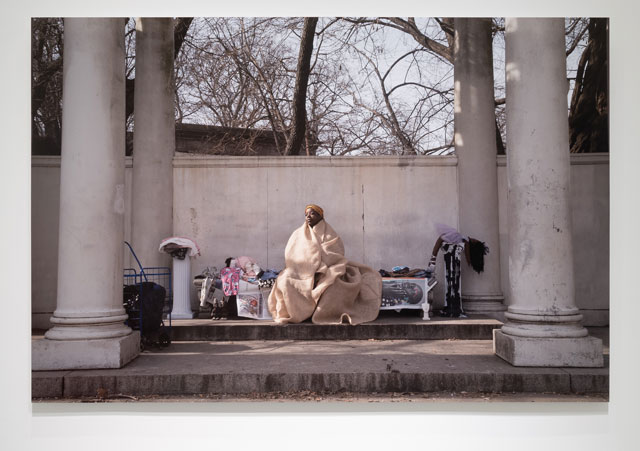 Its visual opposite is the gorgeous, light-struck photograph by Brooklyn-born Nona Faustine. Taken in Prospect Park, it invests the homeless woman at its centre, flanked by large classical columns, with the regality and power of the ancient Greek goddess Demeter, who rescued her daughter, Persephone, from Hades, at least for six months of the year.

The most difficult to watch – the works in the exhibition are not harrowing to look at, although what they refer to is – is by the senior artist in the exhibition, the Mexican Teresa Serrano (b1936). Another advocate for women’s rights, specifically those of vulnerable female Mexican labourers, her short video, La Piñata (2003), films a man with a stick viciously beating a suspended piñata shaped like a young woman. What is most disturbing are his occasional pauses to caress the figure before continuing with his fatal, dismembering assault, the violation all the more horrifying for being inflicted on an object usually associated with children’s festivities.

Perilous Bodies reminds us not only about endangered beings and communities around the world, but also exposes the great flaws in our systems of justice and amelioration and the fragility and limitations of our safety nets. That reminder is crucial. 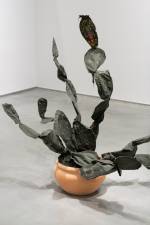 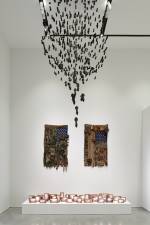 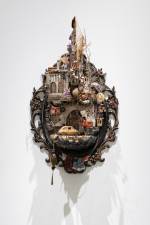