Pacita Abad: Life in the Margins

Pacita Abad: Life in the Margins 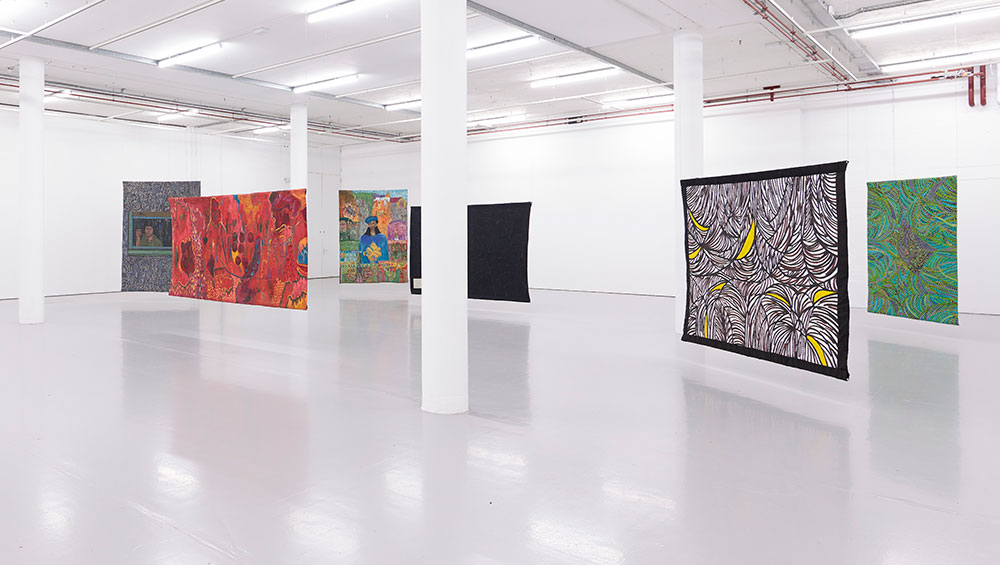 The kaleidoscope of colour sweeping through Spike Island’s crisp, white spaces has brought a carnivalesque atmosphere to the former riverside warehouse. About 20 large-scale paintings by the Philippine-American artist Pacita Abad (1946-2004) hang from the ceiling, making the most of the gallery’s expansive spaces. Curated in collaboration with the artist’s nephew (London-based artist Pio Abad), this is the first solo exhibition of Abad’s work in the UK and centres on her exuberant mixed-media trapunto works. Her intriguing technique involved a method of quilting that originated in medieval Italy. Wads of filling stitched between layers of canvas form raised, padded surfaces, to which she would add paint, embroidery, silkscreen, tie-dye and sundry objects such as seashells, sequins, buttons, ribbons and, it seems, anything else that came to hand. 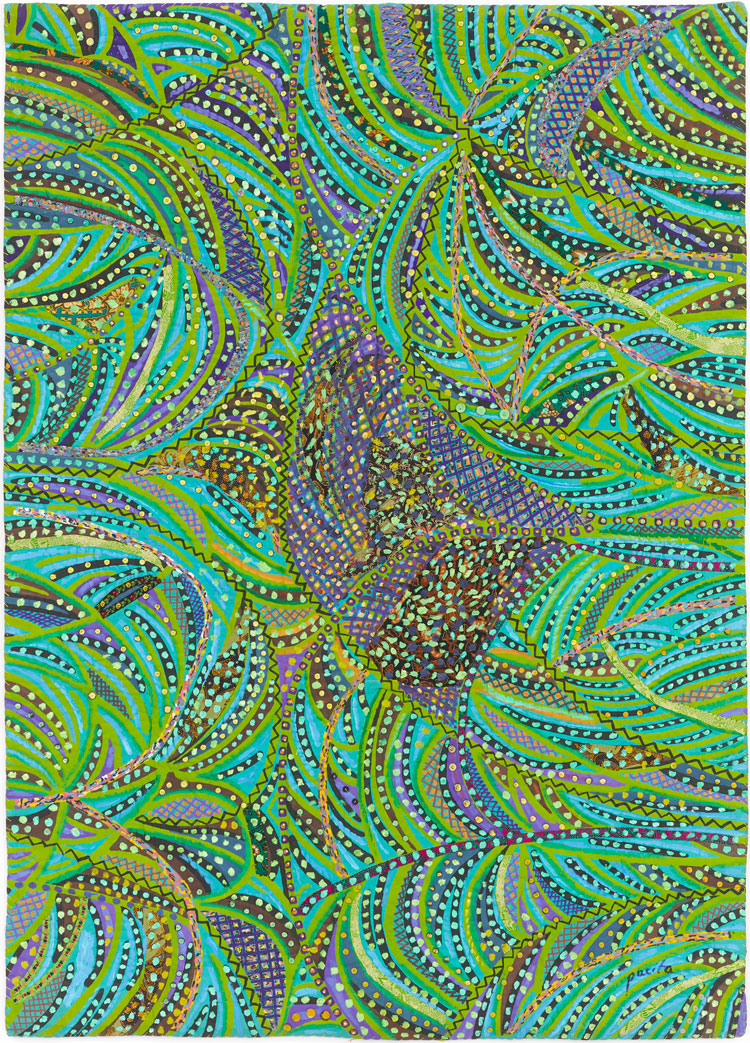 Abad was born on the island of Batan in the northern Philippines and grew up in Manila. In 1969, her father, Jorge, ran for congress, but was defeated because of political corruption. After Abad led a student protest demonstrating against President Marcos, her family’s home was attacked by gunmen (the election result was eventually overturned, and Jorge declared the winner). It was a tense and turbulent time for Abad’s parents who, fearing for their daughter’s safety, decided to send her to Spain to finish law school. These plans were frustrated, however, when, after stopping off in San Francisco, she became ensconced in the local art scene, deciding instead to dedicate her life to art. 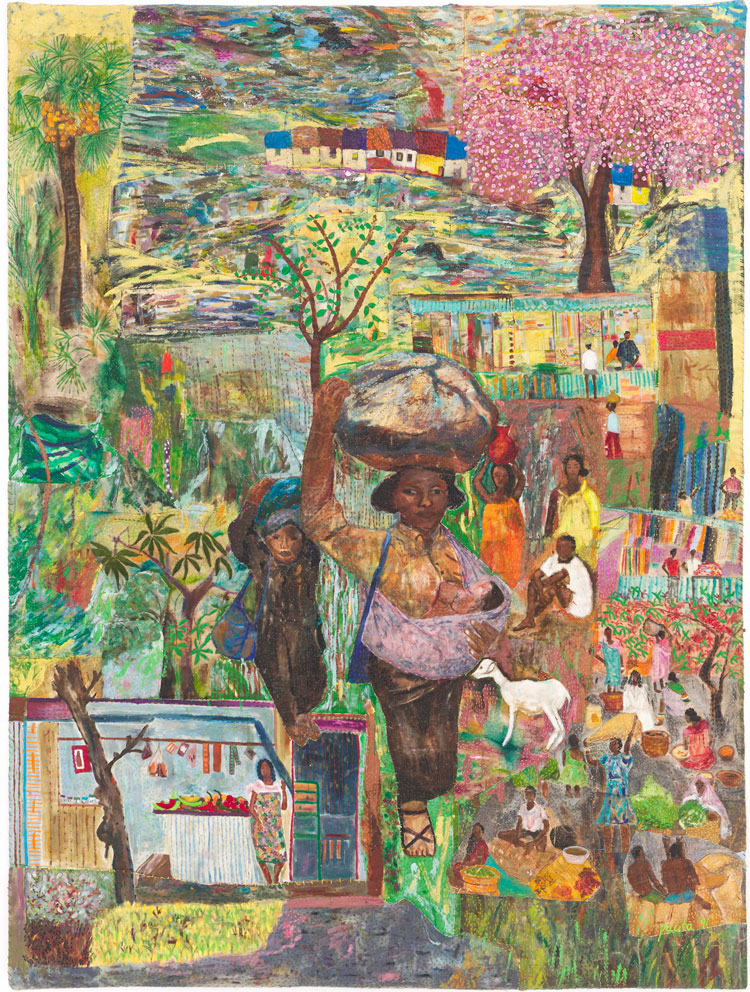 The exhibition opens with a group of abstract works inspired by Abad’s extensive travels, which, by the 1980s, had taken her to Papua New Guinea, Bangladesh, the Dominican Republic, Thailand, Taiwan, South Sudan and many other countries. These richly textured hangings teem with vibrant patterns, marks and stitches, reflecting a variety of influences, from indigenous textiles to Korean ink brush painting, Indonesian batik and Papua New Guinean macramé. Standouts include Grasshopper (1985), with its heady blend of curving green and blue lines, spots, buttons and printed fabrics suggesting a microscopic view of an insect’s wing. Another stunning work is Spider Web (1985), the variegated surface of which evokes a colourful stained-glass window. Occasionally, Abad limits her palette, as in Freedom from Illusion (1984), with its pared-down black, white and brown colour scheme interrupted by bursts of yellow, banana-like forms. Surprisingly, all three paintings have their genesis in a single ink drawing of a rice stalk; that such diversity can spring from a single source is testament to Abad’s remarkable creativity. 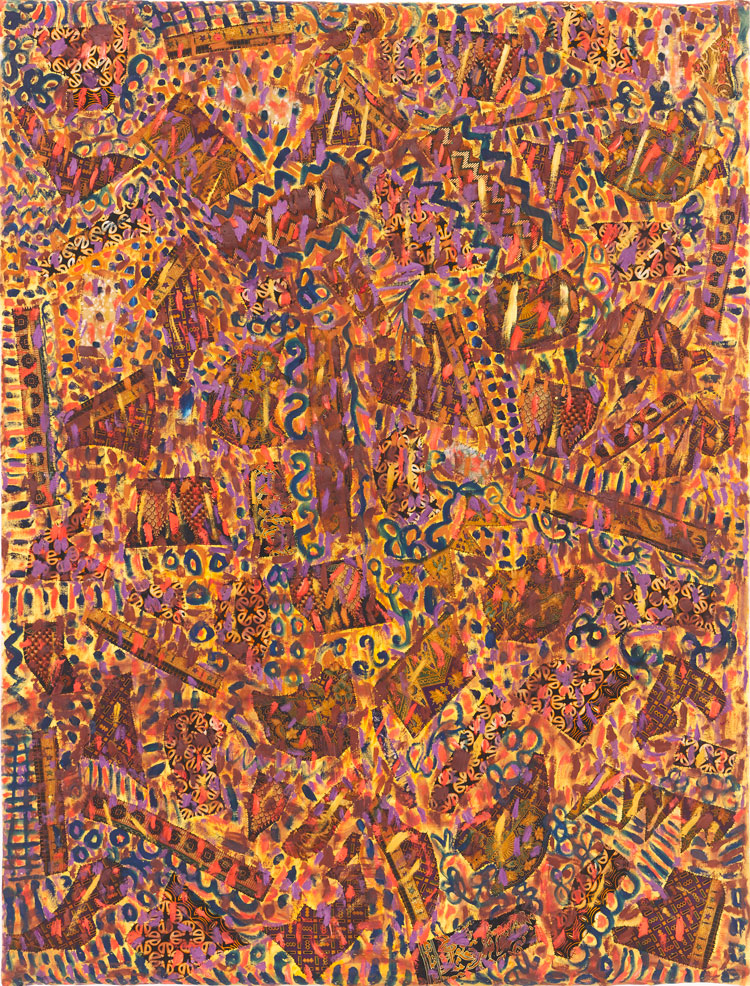 While the natural world was clearly important for the artist, other works carry a quietly political power. Take her earliest trapunto work, Sampaloc Walls (1985), in which a field of swirling, psychedelic colours is punctuated by horizontal and vertical bars. It references the crumbling walls of downtown Manila and was produced at a time when her native Philippines was still suffering political turmoil. Her most political works, however, are those of the Immigrant Experience series from the early 90s. These paintings tell the firsthand stories of refugees and migrants of colour from Asia, Latin America and Africa, people who had left their native countries for various economic and sociopolitical reasons and travelled to the United States in search of a better life. 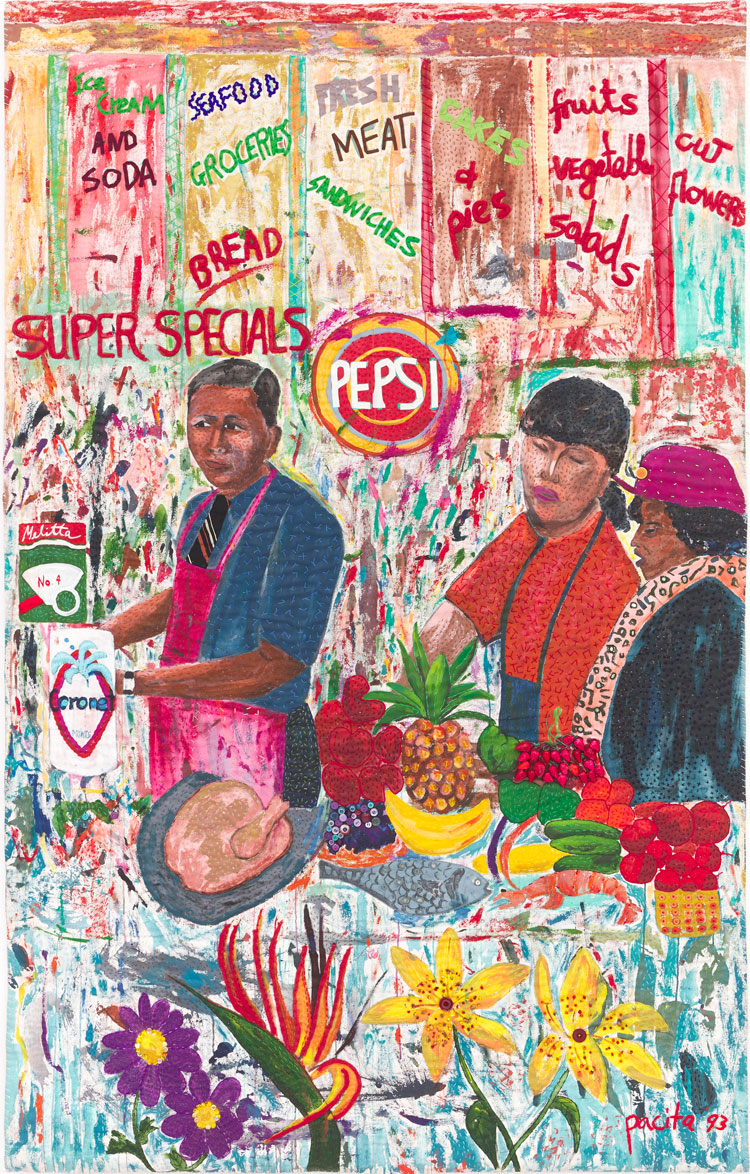 Abad’s Immigrant Experience series, which saw her switch from abstraction to a social realist style, portrays some of the many people she encountered as a fresh-faced immigrant. Market traders selling fresh fish, meat and vegetables are the subject of Korean Shopkeepers (1993), the surface of which is littered with running stitch and beads. A large Pepsi logo points up the contrast between the low-paid shopworkers and the multinational corporations whose products they promote. In If My Friends Could See Me Now (1991), a frowning figure stands with her arms folded. The legend “An American Dream” appears above her head, while all around her are references to consumerism and materialism: an upmarket suburban home, a supermarket trolley laden with goods, an expensive car and a mountain of gold. Whether the woman is hoping to achieve this lifestyle or is disillusioned by its hollow promises is not clear. Either way, the painting reeks of disenchantment. 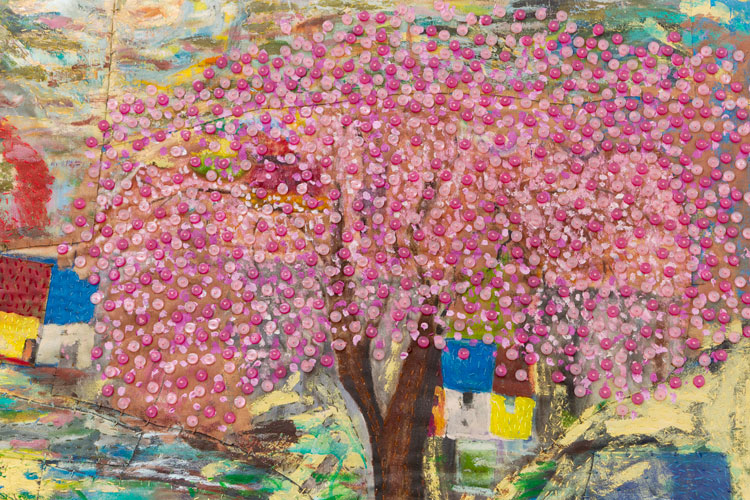 Most haunting is Caught at the Border (1991), a striking image depicting a solitary figure imprisoned behind bars in a detention centre. Despite being painted nearly 30 years ago, it is a scene that feels just as, if not more, relevant than ever. Abad herself had several unpleasant encounters at immigration. In 1984, she was accused of being an illegal alien after flying to Hawaii. Detained and handcuffed by US immigration officials, she was taken against her will to a guarded apartment where she was forced to spend the night. She was freed the following day, but only thanks to a friend in a large San Francisco law firm. Others are not so fortunate. 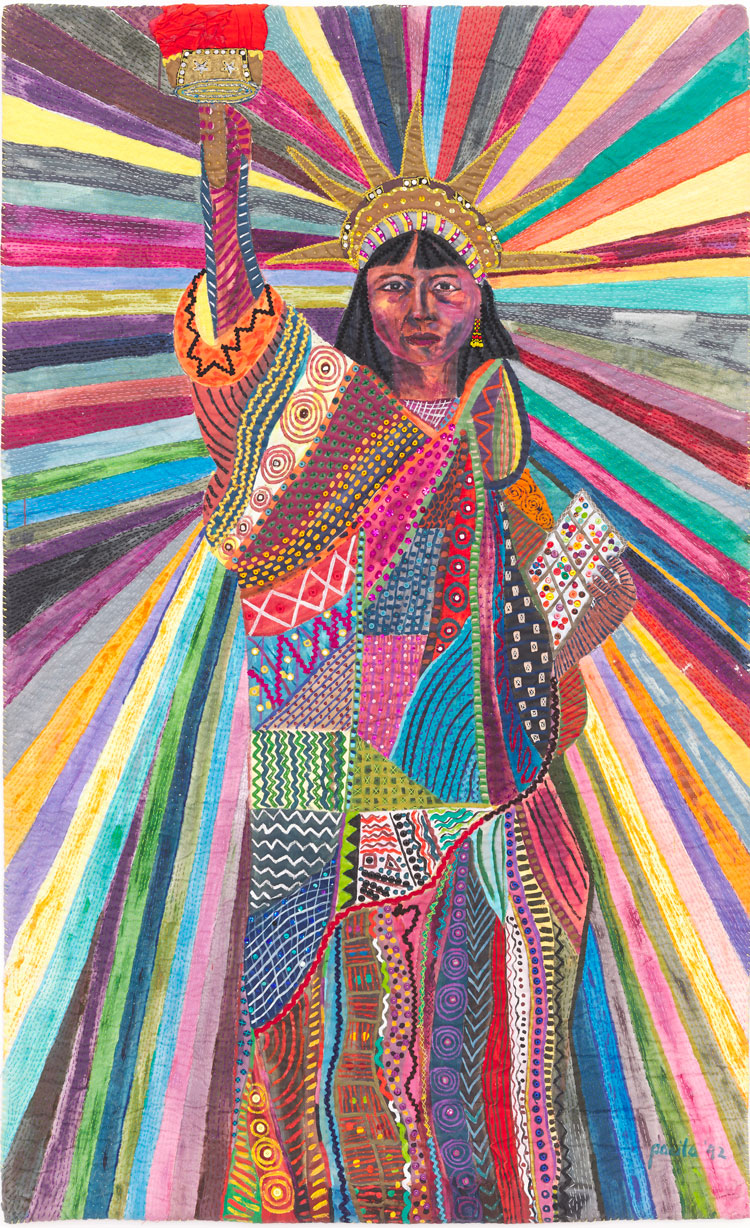 While researching for her Immigrant Experience paintings on Ellis Island, New York, Abad was inspired to honour the story of Asian, Latin American and African migrants after discovering that most did not enter the country via the island’s immigration inspection station, but came in through America’s backdoor states in the south, the southwest and the far west. The result is the colourful painting LA Liberty (1992), which reimagines the Statue of Liberty as a woman of colour. The monument is shown wearing a dazzling patchwork robe embedded with plastic buttons, tiny mirrors and gold thread, with radiant bands of colour radiating from her crown. Abad’s recasting of this iconic symbol of freedom and democracy acknowledges the rich diversity of the US’s immigrant population.

As exhibition titles go, Life in the Margins, is somewhat misleading. During her lifetime, Abad enjoyed 75 solo shows and exhibited in more than 200 museums and galleries around the world. By the time of her death from lung cancer in 2004, the globe-trotting artist had produced about 4,000 artworks and travelled to more than 50 countries on six continents. If she was ever in the margins artistically, it was in relation to the art institutions of the west, where her work is only now beginning to receive the attention it deserves. In a globalised art world, where inclusion and diversity are the watchwords of the day, Abad’s story is a powerful reminder that there is still much life to be found in the margins, wherever in the world they happen to be. Sometimes, they are much closer than we might imagine. 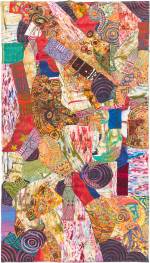 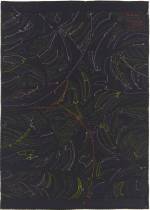 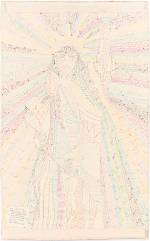