The Guggenheim’s retrospective of On Kawara brings to the fore the great richness of the artist’s practice yet, despite the wealth of detail, you come to know so little about the man who painstakingly made these works

There is at times a monastic stillness to On Kawara’s work. To record the mundane facts of everyday life, the passage of time, the actuality of one’s own presence in the world with an obsessive exactitude can produce at once a meditative experience and a frustratingly empty accumulation of data. The current retrospective devoted to Kawara at the Guggenheim brings to the fore the great richness of his practice. Being seduced by the artist’s paintings, postcards, telegrams and maps is to be taken in by the systematic recording of fact and to find that amid so much detail you come to know so little about the man who painstakingly made these works. The works are deeply personal and yet always distant.

Kawara, who died last June, was fiercely private. There are no recorded interviews and no early photographs. The exact date of his birth and death are unknown, although it is recorded that he lived for 29,771 days. Born in Japan in December 1932, he was just a teenager when the atomic bombs were dropped on Hiroshima and Nagasaki in 1945, events that he recalled left him traumatised and filled with doubt. He moved to Tokyo after high school in 1951, and it was there that he first began making and exhibiting art. Like many young artists coming of age in the 1950s, Kawara’s work from this period (much of which he destroyed) is figurative and evokes the postwar melancholy and recent memory of the horrors of war.

At the end of the 50s, Kawara went to Mexico City, where his father was the director of an engineering company. In 1962, he set off for New York, where he stayed for eight months before travelling to Paris. He returned to New York in 1964, and it is during this movement between New York and Paris that we are introduced to the artist at the Guggenheim, with 39 drawings for unrealised projects and installations. An interest in modular repetition and language comes through here in playful sketches of a keyboard with roman letters, and in another of one with Japanese characters, or in the parallel lists of opposing instructions noted hastily on brown paper.

After finding that he could not realise his installation to his satisfaction, Kawara began to develop a language-based conceptual practice that, unusually, was intimately tied to painting. At the Guggenheim, his first “Date Painting” from 4 January 1966 sits in a glass vitrine. In retrospect, this image is epoch-changing, but here it seems strangely lonely and disconnected. Yet the 48-year project that this painting heralded soon becomes the highlight of the exhibition as you encounter all 97 Date Paintings Kawara produced in early 1970 – the longest consecutive run in this decades-long series.

The production of the Date Paintings followed a strict protocol. Each one is inscribed with the date in neat white letters and numbers against a monochrome blue, red, or gray background. The dimensions of the canvas were limited to eight formats (the largest size first appeared in July 1969, during the Apollo 11 moon-landing mission) and each painting had to be completed within the span of a given day – if incomplete at midnight, the work was destroyed. On rare occasions, Kawara would produce two, or even three, paintings in a single day. While these pieces may, at first, look deceptively mechanical, the presence of the artist’s hand is apparent in each one. It is clear that he cared about composition and craft: he mixed the paint for each canvas and the monochrome backgrounds are built up painstakingly over hours, with careful, evenly applied coats. Within the strict parameters, however, there are variations: the Date Paintings record not simply the day, but also where Kawara was when he made the work, as the abbreviation of the month is given in the language spoken in his given location. Time not only progresses, but it is relative.

For many of the Date Paintings, Kawara designed cardboard containers that he lined with a piece of newspaper from the day. While the front page and important international politics appear, so too do TV listings, local news, advertisements and celebrity gossip. These boxes and newspaper clippings are rarely seen, and together with the paintings they house, the works speak to both the way we document and consume information. When looking at these objects, are we drawn to the fact that the date must have been special for someone, or to the reverse, that for so many it was just another day?

Between 1968 and 1979, Kawara produced three serial works that reflect activity: I Got Up, a record stamped on a postcard of the time at which the artist rose each day; I Went, photocopied street maps on which the artist traced in red pen the area he had traversed in a given day; and I Met, a list of the people – friends and strangers – whom he encountered. Kawara’s postcards are beautifully installed in large Plexiglas screens so that both image and message are visible. From the stamped date and location, we learn that Kawara travelled frequently and was not an early riser. But we are given no indication of how he felt that day or what occurred. What does emerge from the addresses is a sense of the international network of artists, dealers and intellectuals whom Kawara brought into his daily postcard ritual, including Kasper König, Seth Siegelaub, Sol LeWitt, Lucy Lippard, Dan Graham and John Baldessari, to name only a few.

Through his work, Kawara helped to clarify the basic duality of image plus text in conceptualism, as well as its love of systems and the accumulation of uninflected information. He helped to strip art of its reliance on personal emotion, reducing it to pure idea. It can take time to adjust to the pace of his work and its timbre. Kawara never offered interpretations of his work, and this lack of guidance can feel alienating, but it is also what makes his work so accessible, it welcomes the viewer to shape their own encounter. 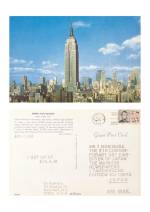 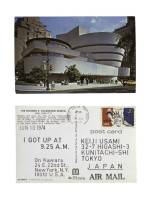 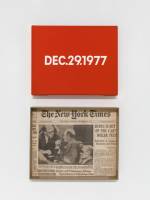 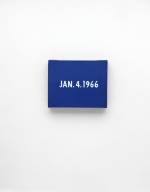 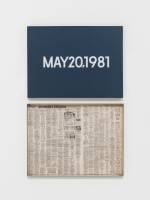