This series of drawings depicting urban life in New York was made while Chernysheva was on a month-long visit from Moscow, and marks the first time she has explored a subject outside her home country 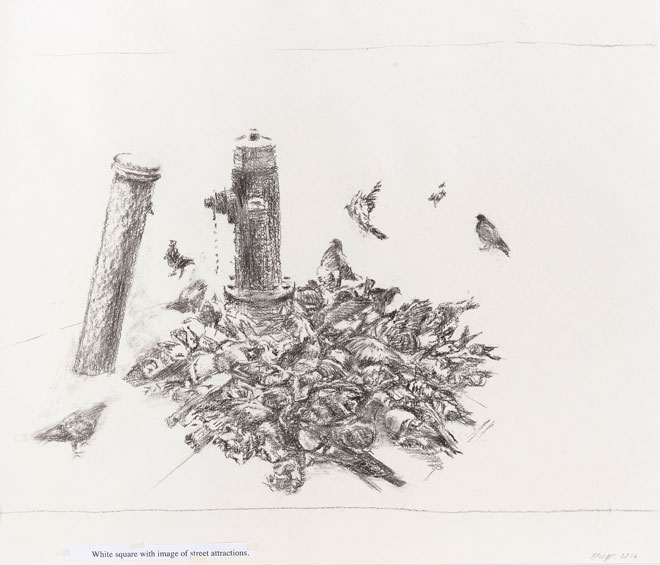 In November 2015, Moscow-based artist Olga Chernysheva spent a month in New York, wandering the streets and subways, responding visually to the ordinary scenes that caught her eye. On her return home in December, she recounted her trip through a series of charcoal drawings that are now on view at the Drawing Center. Here, the works are hung salon-style in a narrow gallery, a choice that encourages intimate viewing, forcing us to take the time to gaze at subjects that the artist explains were “not asking to be looked at”.

In her photographs, videos, and drawings, Chernysheva is known for engaging with the mundane reality of urban life, but this is the first time she has explored a subject outside her home country. Born in 1962, the artist came of age during the fall of the Soviet Union, as the country was forced to encounter an immediate capitalist revolution that seemed to cut Russian citizens off from the flow of history, and much of her work addresses the ironies and idiosyncrasies that emerged in the aftermath of the dissolution of the communist system. She often turns her camera to focus on the abandoned and socially overlooked, but there is also humour to be found in these images of everyday life. For someone who is so attuned to the rhythms and feelings of her native country and who captures scenes with a knowing eye, it is intriguing to see how she approaches a subject as an outsider. Yet what is striking about the drawings of New York is not that they show the curiosity or sensibility of a tourist (aside from the first self-portrait of her reflection in a hand-dryer at the airport). Instead, we find that her distance, or perhaps her unfamiliarity with the landscape, made her more receptive to noticing and documenting prosaic, and at times even stereotypical, New York winter imagery: a doorman caught asleep beneath a holiday wreath, rows of fir trees leaning against a wall waiting to be sold, a swarm of pigeons gathering to fight for food by a fire hydrant, or a chance mise-en-scène on a subway platform.

In their detail, the drawings have an almost photographic realism and the compositional style mimics a snapshot aesthetic with moments seemingly caught by chance, neatly framed and captured as the artist was walking by. But Chernysheva has also scrutinised her subjects and on each drawing is taped a small caption. At times funny, and at others caustic, the words give direction to our interpretation of the images: the captions prompt us to ponder but provide no clear answer or conclusion.

In several images depicting the Picasso sculpture exhibition at the Museum of Modern Art, New York, we see heads connected to amorphous bodies distorted by the glass of vitrines that separate the visitors from the artist. Each of these drawings carries the phrase “the birth of abstraction”, which offers a mocking play on the simple distortion of vision and the aesthetic of cubism. The caption accompanying the depiction of rubbish bags piled high against parked cars proclaims: “A small batch in the growth of the material world. Brake.” While the first phrase offers a clear critique of our insatiable consumer-driven economy and its byproduct of waste, the second, short phrase calls for an important pause. It was only after reading these words that I looked again and saw a foot and realised that there was a homeless man sitting amid the garbage.

One of the most ominous scenes bears the equally dark words: “Forbidden subject”. Here the outline of a round man looms large in the foreground walking towards, or perhaps gesturing to, a group of people in the background. We are separated from the scene by a chain-link fence, the ragged edge of which runs along the top of the drawing. In issue No 129 of Drawing Papers, Mónica de la Torre offers an eloquent interpretation of the image, writing: “For a subject to be forbidden, a restriction needs to make itself manifest. It’s a simple question of geometry. Surround an area with a chain-link fence and what remains inside it will be off-limits. A drawing produces a comparable optical illusion. It simultaneously reveals what it encloses, and no matter how close you come to it, it will always seem to be out of reach.” In Torre’s explanation, the power of “simple” geometry, of the denotation of lines as barriers, is neatly unpicked.

Sometimes, Chernysheva’s captions feel out of place, seeming to offer a generalisation rather than a pointed commentary on the image itself. This is the case with the image of the sleeping doorman, on which the caption reads: “An image is always part of itself. In the sense that it belongs to the world which creates it.” These words speak to the pull between personal and impersonal that pervades Chernysheva’s work. In this drawing, the wreath and sleeping man are pushed to the corner and lower edge, leaving a long expanse of space in the centre of the composition that seems evoke a strong empathetic sense of loneliness and that also creates a sense of distance. There is a sweet intimacy to the subject, but the calmness of rest is ruptured by the realisation that you are gazing at someone who does not know of your presence. Looking at the image, one can’t help but feel a little guilty for invading the tired man’s repose and for knowing that he has been caught evading his duty. Chernysheva says she wants to show “what is already very much visible”, but there is more behind this straightforward statement. It suggests that we do not pay enough attention to such subjects and that we need to look again. 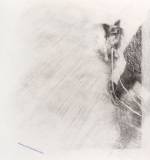 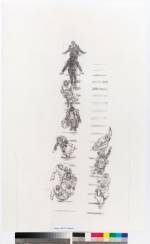 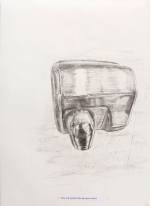 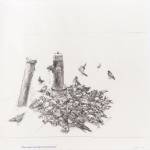