There are nearly 30 years of work in this retrospective, so it is to be hoped that, despite the show’s crowd-pleasing, selfie-inducing tone, visitors take in Eliasson’s serious environmental messages 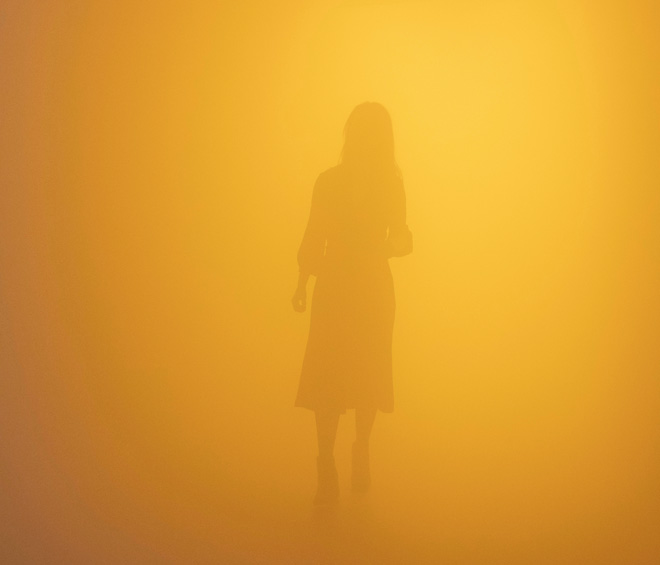 It was a game-changing moment for Tate Modern and Olafur Eliasson (b1967, Copenhagen) when, in 2003, he filled the Turbine Hall with orange, misted light from his semi-circular “sun” lantern and induced all kinds of uncharacteristic behaviours in its visitors, who made shapes, mucked about, or just lay around gazing up at their reflections in the Mylar-coated ceiling. The Tate team vastly underestimated the appeal of this, then relatively unknown, Icelandic-Danish artist, according to the BBC’s arts editor, Will Gompertz, who was at that time working for the Tate media team. Apparently, it was estimated that maybe 100,000 people would come to see The Weather Project. More than two million visitors later, it became the most celebrated piece of immersive art ever. 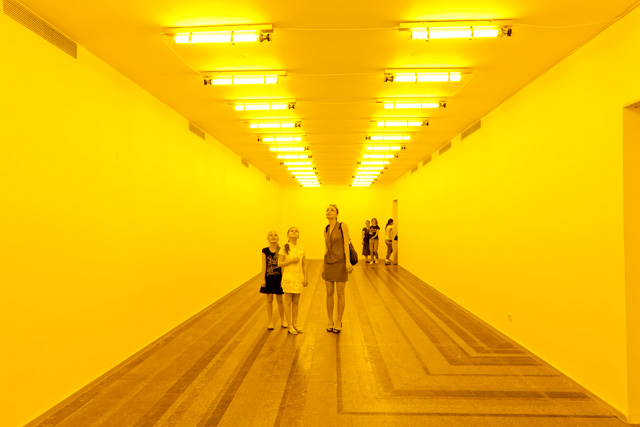 Nobody is underestimating the appeal of Eliasson with this retrospective, In Real Life. Even before you enter the first-floor gallery, you encounter a sequence of sickly yellow lights in the lift corridor (Room for One Colour, 1997) and a selection of what appear to be oversized disco balls, one accompanied by its monochrome reflection (Stardust Particle, 2014) and the other (Cold Wind Sphere, 2012) throwing multiple complex shadows across the nearby walls thanks to its layering of three different-sized spheres made of glass triangles in varying shades of blue. They are instant Instagram-fodder, no doubt about it, and it is a shame that this crowd-pleasing, selfie-inducing introduction sets the tone for the show. 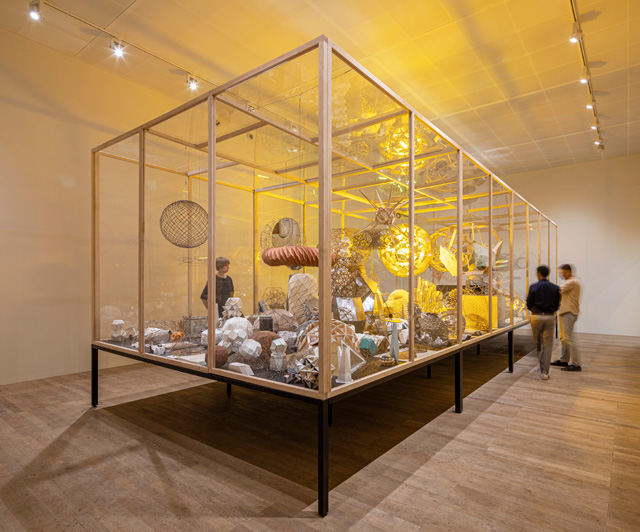 The first room contains a large metal and glass showcase filled with some of the geometric experiments that Eliasson’s work has entailed. Titled Model Room (2003), it features 450 models and prototypes that represent the very real spirit of research and enquiry that moves both the artist and his ever-expanding Berlin studio (now with 120 employees), along with their scientific collaborators, most notably Icelandic artist, architect and mathematician Einar Thorsteinn (1942-2015). Although videos and the workshop setting at the end of the show give evidence of the studio’s prevailing spirit of curiosity, collaboration and experimentation, here that rigour and expansiveness is sadly less in evidence; the multiple, curving structures of wire, paper and card piled within the showcase or dangling from its bars have the festive aura of a scaled-up box of Christmas baubles. 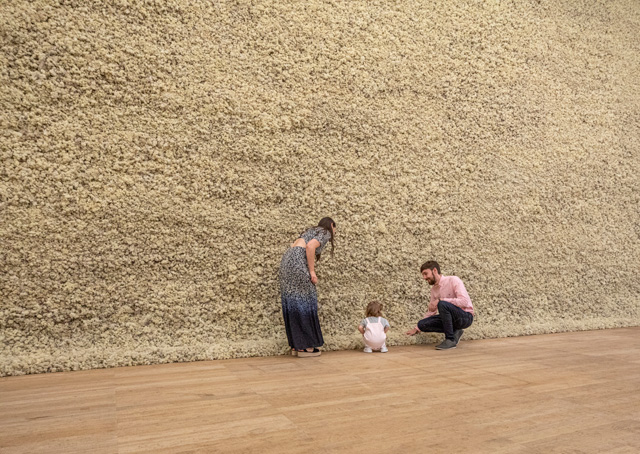 There is nearly 30 years of work in this show. On leaving the baubles behind, you enter a room with three particularly eye-catching pieces from the 90s: the entire left-hand wall has been covered in pale green moss (Moss Wall, 1994), a work that emerged from his early enquiries into whether architecture could be more like nature. In the centre of the room are four long troughs filled with yellow liquid (Wavemachines 1995), each of which is fitted with a small motor that apparently triggers tiny waves in the water (none was visible on my visit). On the near wall is Window Projection (1990), which is literally that: a gobo projecting the shape of a large multi-paned window on to the wall. Perhaps what is hard to convey to contemporary gallery-goers, now accustomed to the familiar spectacle of art that engages you viscerally through light and mirrors, is the radical nature of Eliasson’s work when it first emerged. There are quieter, perhaps more profound works here, such as I Grew Up in Solitude and Silence (1991): a candle burns in the centre of a circular mirror, which places viewers in an interesting relationship between their awareness of the candle’s essential durational component and the mirror’s glossy surface drawing you into the here and now, with its endless reflections of viewer and surrounding hubbub. 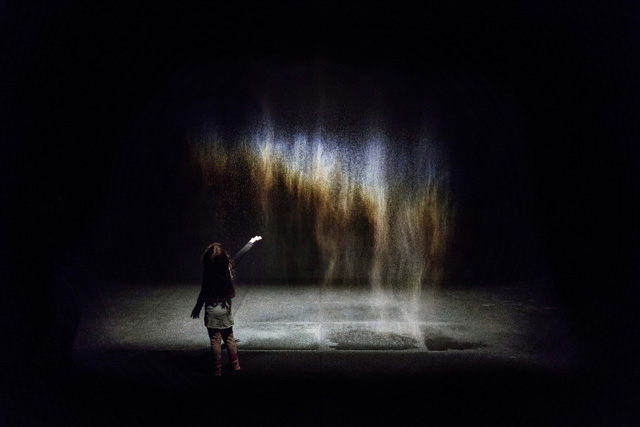 Eliasson’s preoccupations haven’t changed much over the past three decades: how art (and science) can intensify our awareness of and sensitivity to the natural elements around us, and our relationships with each other. Another early work here flags up his enduring interest in water – something he attributes to his childhood experiences in Iceland’s vast, often wet, and foggy landscapes. Regenfenster (rain window) (1999) replicates the rivulets and choreography of heavy rainfall down a Tate Modern window (not an unusual sight during an English summer). There are more intriguing works with water awaiting you, however, such as Beauty (1993) in the next, darkened room: a fine mist of watery droplets, pulsing from a punctured hose, creates a semi-transparent veil across which you can occasionally detect a rainbow, depending on the angle of your vision and that of the single light bulb that illuminates it. The most disconcerting and interesting work of the show comprises a 39-metre-long walkway filled with dense vapour and lit by bright, monofilament light, which interacts with your unique visual receptors, meaning everyone might see the colour differently; this is a work through which you have to process gingerly, unable to see much more than a metre through the fog in front of you. 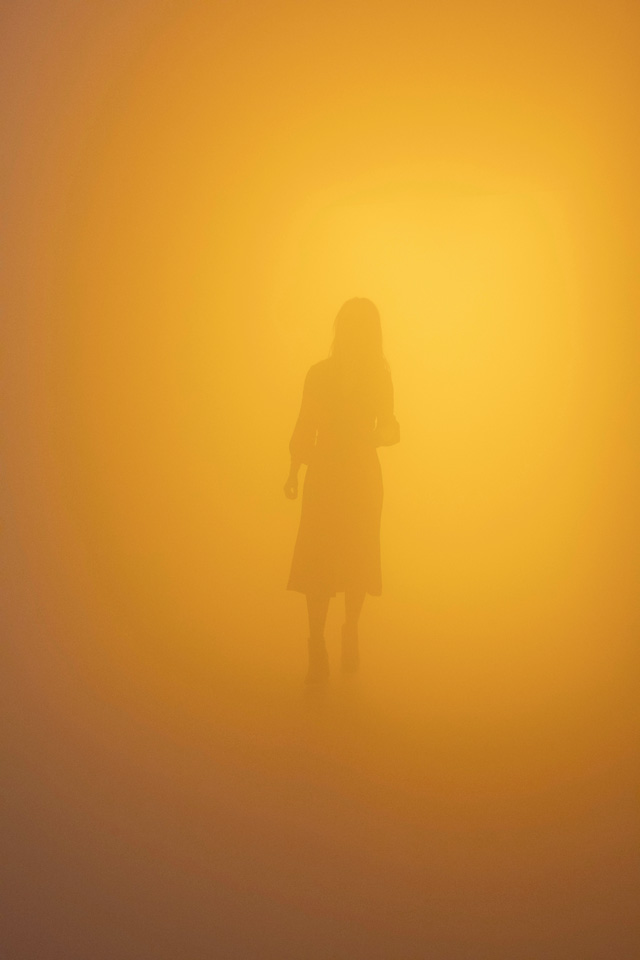 Din Blinde Passager (Your Blind Passenger) (2010) explores not just your own experience of how important other senses become when one of them is restricted, but also how those senses are affected by the presence of others in that space. The idea of art as a medium for social interaction is also crucial for Eliasson. Perhaps this is most cleverly articulated by a subsequent piece, Your Uncertain Shadow (Colour) (2010), a white room where nothing appears to be happening until you – or others – move across it, casting polychromatic shapes across the wall from lamps in the floor.

There are new works in this show, reflecting Eliasson’s intensified emphasis on global warming – for his Ice Watch project, he has been trawling lumps of glacial ice that are adrift from their centuries-long mooring and carting them around the world to display them in prominent urban settings to draw attention to this alarming erosion; they made a brief appearance outside Tate Modern, last winter.

These works are clustered at the centre of the exhibition, including a series of photographs he took of Iceland’s glaciers in 1999, which will be joined towards the end of the show by an updated selection, which Eliasson is planning to take this summer to show how much more glacier has been lost. More starkly, this loss of glacial mass is brought right into the gallery with us by The Presence of Absence Pavilion (2019), a bronze sculpture of the empty space left where a now-vanished lump of ice (around which it was cast) used to be; it follows on from an earlier work of the same title, made in 2015, but formed by casting blocks of ice in concrete. 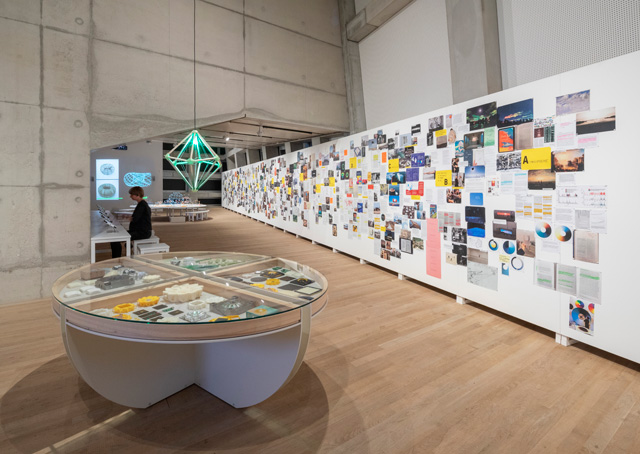 The final space, The Expanded Studio, opens up insights into his studio and practice, as well as the many ventures that his eternally curious, questing mind has spawned, from his Little Sun solar-powered lamp project (aimed at providing cheap lighting to parts of Africa that have no electricity, there are now more than 830,000 lamps in circulation); Green Light – An Artistic Workshop, a programme of workshops that brings together asylum seekers and refugees with members of the public; and his passion for delicious, nutritious and sustainably produced food. He has his own studio kitchen (tantalisingly documented on Instagram @soe_kitchen) and, for the duration of this show, it is collaborating with the Tate’s catering team to offer organic, vegetarian and locally sourced food at Tate Modern’s Terrace Bar. 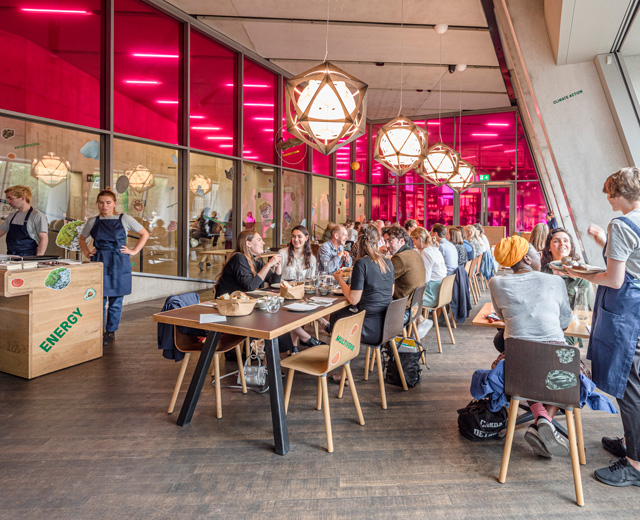 If there is something a little too slick, photogenic and accessible about this show, one wonders what the driving forces were: Eliasson’s evangelical zeal to take his message to a broader audience, or perhaps the Tate’s scaled up visitor ambitions. Let’s at least hope that a percentage of visitors will leave having ingested its more serious messages and not just a smartphone full of selfies. 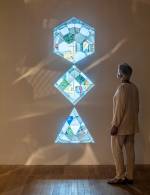 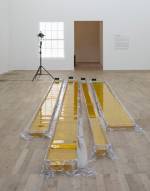