Devastated by Hurricane Katrina in 2005, the sculpture garden now has a spacious new extension and almost 30 additional works, including commissions from Teresita Fernández, Maya Lin and Elyn Zimmerman 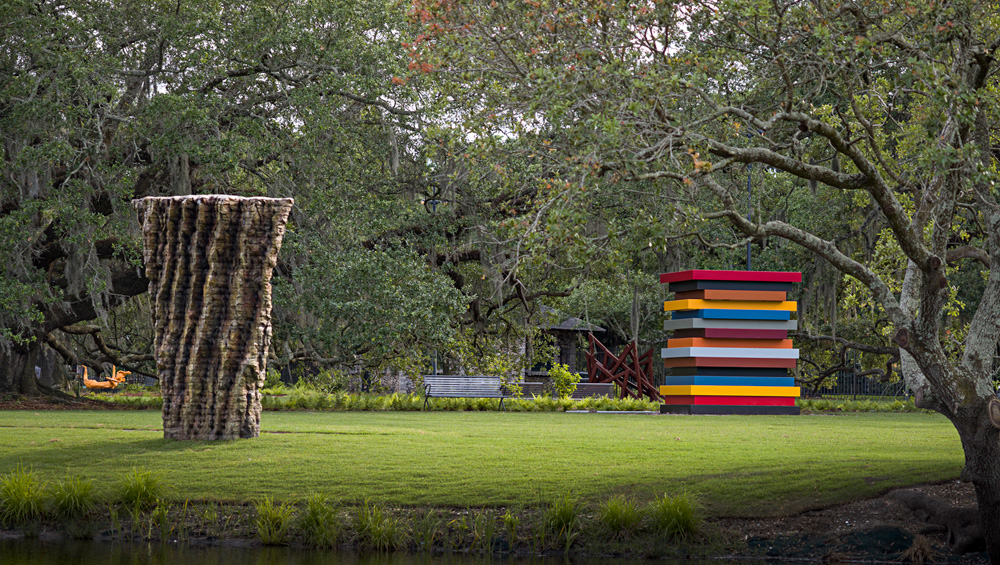 It is not Venice – Italy or California – but you do skirt water, walk over it and sometimes (it seems) even walk on it, as you move through the pleasing new extension that doubled the size of New Orleans Museum of Arts’ original Sydney and Walda Besthoff Sculpture Garden, conceived in 2003. Unveiled on 15 May, the expansion is the latest addition to New Orleans’s storied cultural offerings. An 18-month project, 6.5 acres were reclaimed from the land and lagoon adjacent to the museum that had been devastated by Hurricane Katrina in 2005, turning it into a welcoming outdoor salon dotted with trees (including palmettos and live oaks) as well as other indigenous shrubs and flora. 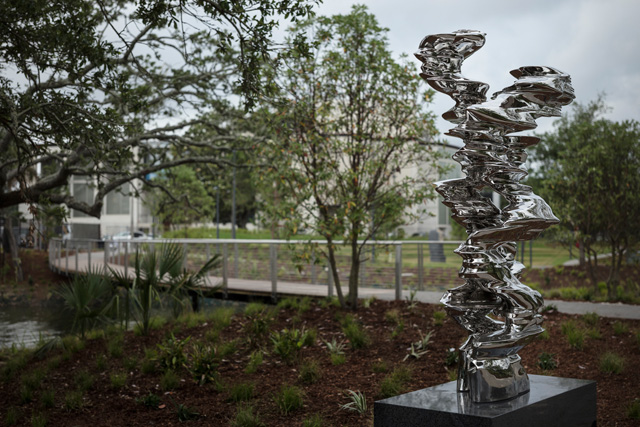 Greeting viewers are 26 additional works (soon to be 27 when Ugo Rondinone’s magnificent gilded Sun (2019), an enormous open wheel of Midas-touched tree branches cast in bronze, joins them later this year), bumping up the Sculpture Garden’s total to more than 90 works, almost all a gift of the Besthoff Foundation. The recently installed sculptures, arranged along a pathway that gently, graciously wends through the new grounds, represent a range of subjects and styles from the figurative to the abstract in a gamut of materials, mostly from 2000 to the present. 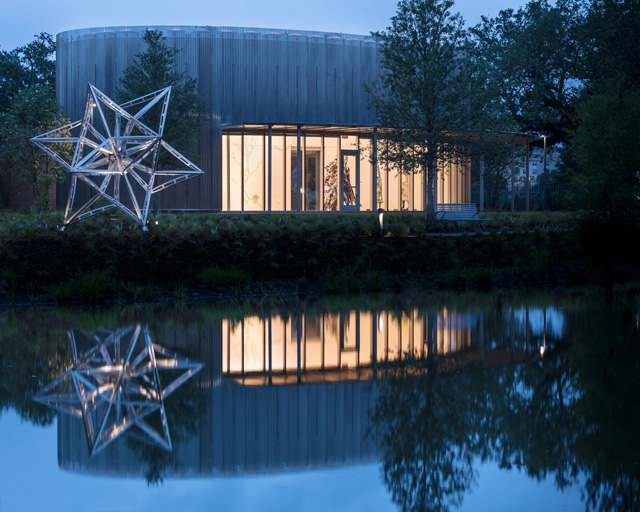 The artists, almost all well-known, are also (relatively) diverse, if still tilted toward white males, with women still a minority, at around 25% of the artists represented. That said, the three commissioned works, highlights of the new garden, each emphasising the deeply intertwined relationship between New Orleans and the Mississippi and visually splendid in their own way, are by women: Teresita Fernández, Maya Lin and Elyn Zimmerman. 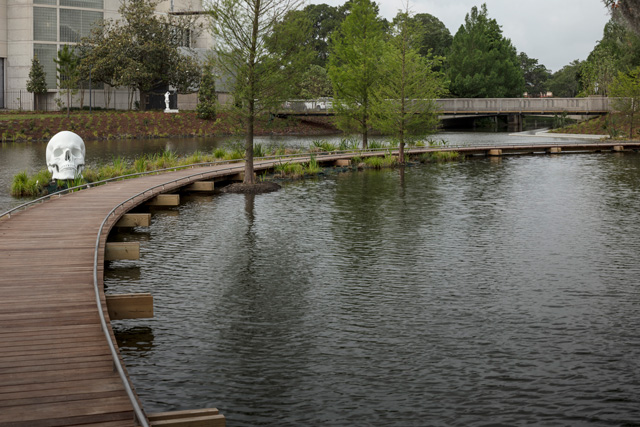 The design of the expansion was overseen by the landscape architects Reed Hilderbrand and is ecologically sensitive, reshaping the lagoon to treat and conserve the water as it helps to stabilise the larger ecosystem in accordance with strict environmental guidelines.

Water – as can be imagined – is a particularly complicated subject in New Orleans and is never too far from its inhabitants’ minds. Underscoring that tightly symbiotic relationship is an ingenious canal link bridge, said to be the first of its kind, connecting the new sculpture garden with the old. It is a long, sleek trench that dips below the waterline and cuts through it, the water dammed to form a walkway, a kind of parting of the waters for pedestrians. 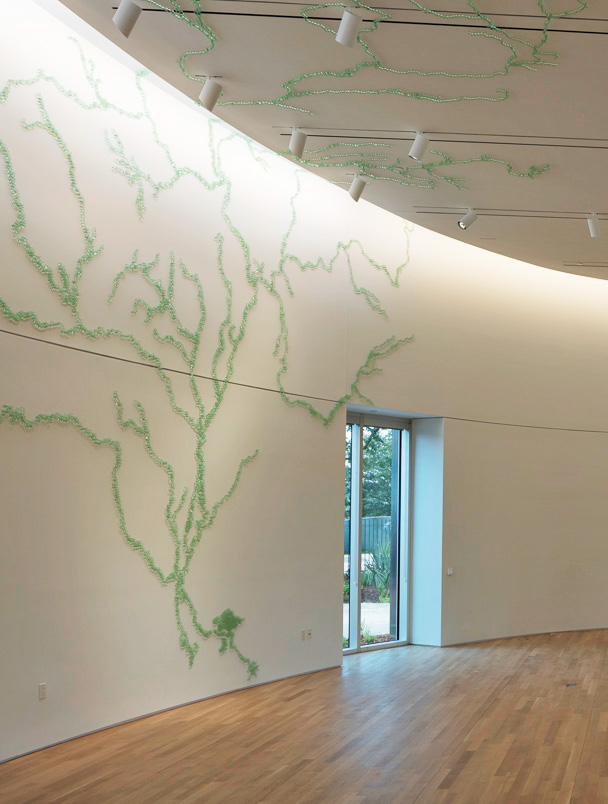 In addition, a handsome 5,000 sq ft (464.5 sq metre), glass-fronted, sky-lighted, elliptical pavilion (and an outdoor amphitheatre) designed by Lee Ledbetter and Associates was created to house art indoors. Maya Lin’s Folding the Mississippi (1938) (2019) is among those works. A longtime environmentalist as well as an artist and architect, Lin’s proliferating pale sea-green glass-bead-wall installation maps the winding course of the fateful river that is the second longest in the US, delicately tendrilling the gallery wall.

Outside, the pavilion is embraced by Fernández’s imposing 60ft-long (18.3 metre) mosaic wall of undulant primeval greens, turquoises and earth tones so cannily modulated that it seems like a work of nature, and even pungent (although the fragrance is part of the park’s aromatics.) 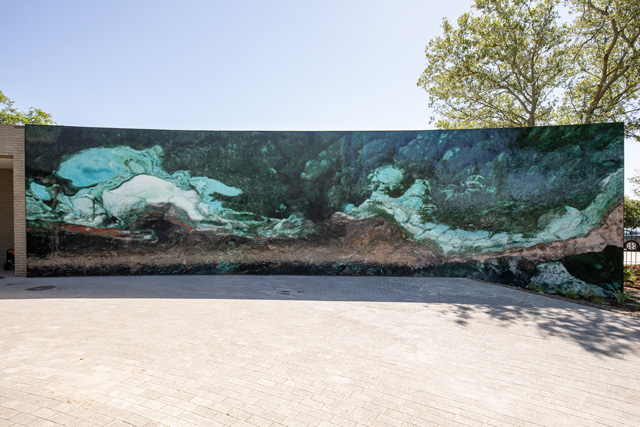 Made from countless hand-glazed tesserae that catch and reflect the light, it is called Viñales (Mayombe Mississippi) (2019), a dramatically stratified riverine landscape that interweaves the shared history and culture of Cuba, the artist’s native country, with the Democratic Republic of the Congo and New Orleans that in turn conjure thoughts about disruption, displacement and migration, combining, as Fernández does so well, art and architecture, the political and poetic. 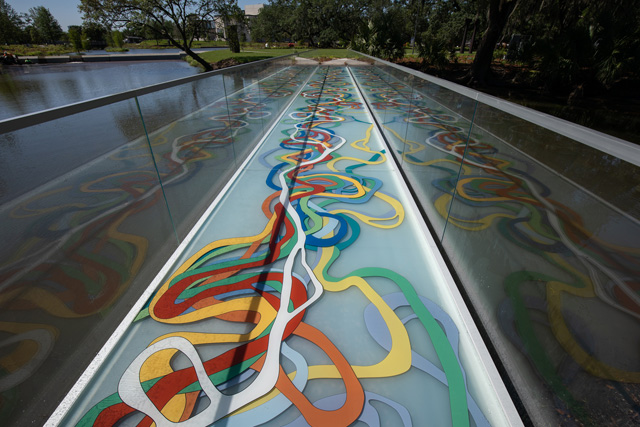 The third commission, Mississippi Meanders (2019) by Zimmerman, is the most functional of the works on display, effortlessly blending visual beauty with its role as a bridge connecting one lawn of the park with another. Made of translucent laminated glass – what park wouldn’t be made more bewitching as the possessor of a glass bridge? – its slender, sinuously interwoven ribbons of reds, greens, yellows, blues and whites accompany you across the roughly 80ft (24.4 metres) of its span. The pattern, not merely an abstract design, corresponds to the colour-coded maps of the shifts in the Mississippi since the formation of its modern meander belt more than 70,000 years ago, created by geologist Harold Fisk and his team in the 1940s. One of the particular charms of Zimmerman’s bridge is its ethereality and, when the conditions are right, the bridge ripples with light, its patterns dancing, the glass underfoot seeming to dissolve, giving you the heady feeling that you are floating, walking on water. 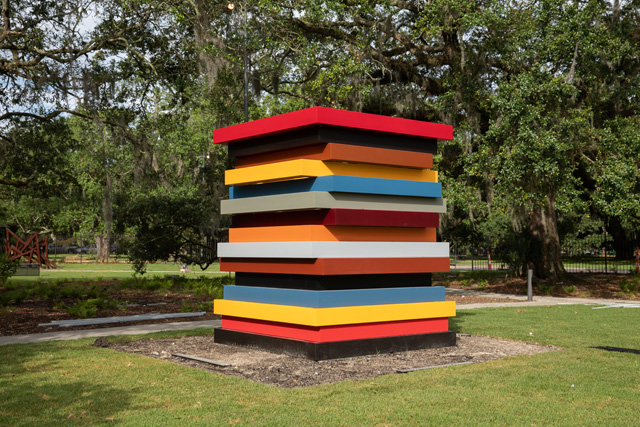 Both projects add a snap of colour to the park, as do other works: Sean Scully’s muscular stack of brilliantly hued steel slabs; Shirazeh Houshiary’s luminous violet spiral; and Larry Bell’s transparent red-glass rectangle-within-a-rectangle that transforms right-angled reserve into the astonishingly glamorous. 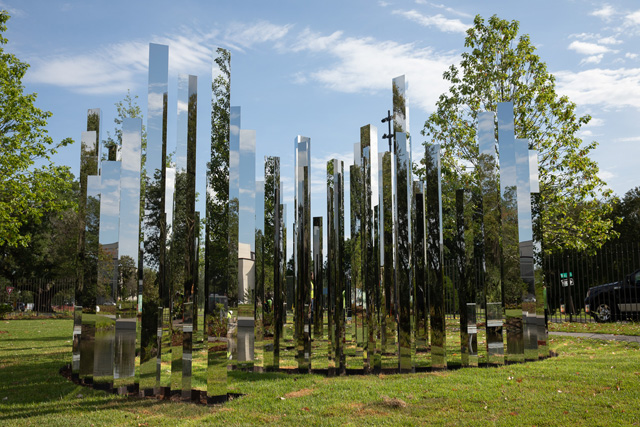 Among the most popular works of the new park is Mirror Labyrinth (2018) by Jeppe Hein. Visually confounding, it draws viewers into a distorting maze made of reflective metallic vertical slices that fragment and multiply everything that passes before them. One teenager stumbled out, looked down at herself with mock relief to find herself intact, then said, turning to a friend: “This is the real me!” 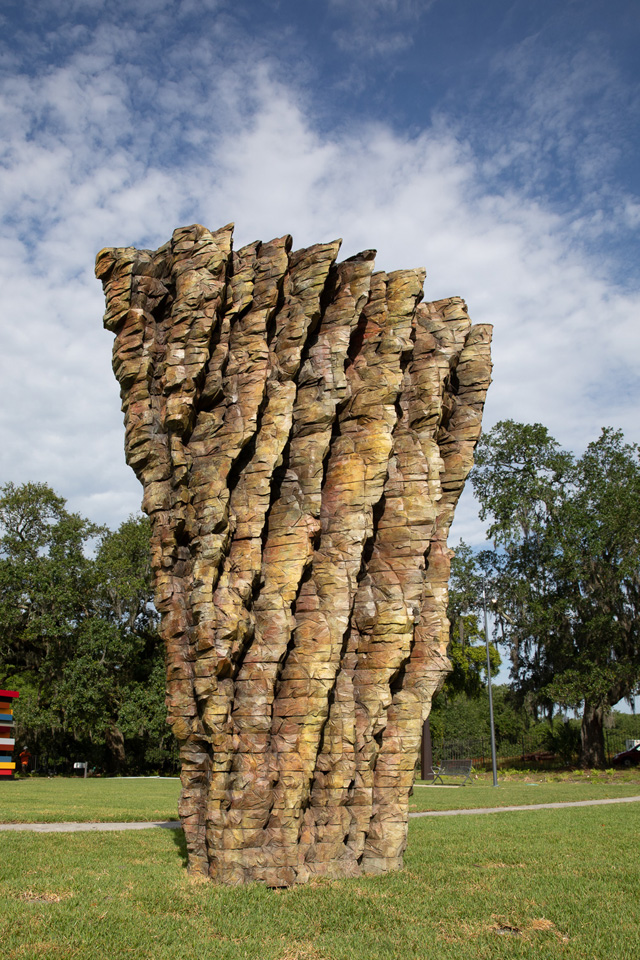 Other notable works – and they are many – are Ursula von Rydingsvard’s powerful bronze Dumna (2015), Johan Creten’s elegant, totemic column, the sharply pointed star that looked as if made from a giant erector set by Frank Stella, the silvery life-sized bear by Frank Gehry, its disrupted, convoluted pelt not that much of a stretch to compare with the idiosyncratic structures of his buildings, Thomas Houseago’s hulking, uneasy gladiator and Hank Willis Thomas’s History of the Conquest (2017), with an exoticised costumed figure riding high atop a giant snail, an ironic steed, in a magnification many, many times that of the original 17th-century miniature by Jeremias Ritter. 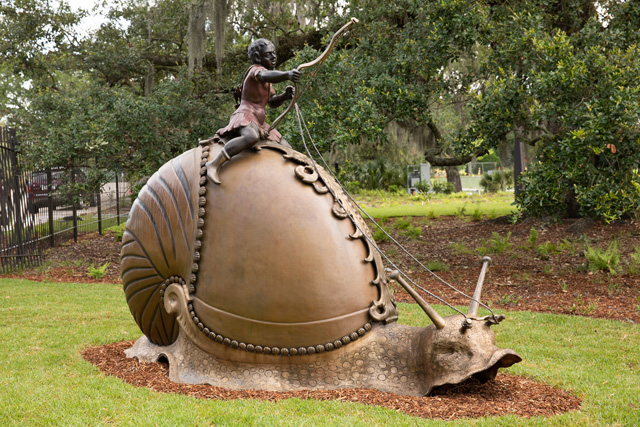 The Besthoff Sculpture Garden sees itself as a community hub, with much to offer, priding itself on its outreach. As part of that, it is open seven days a week, and better yet, it is free to the public, making it accessible to all, something more art institutions might note. 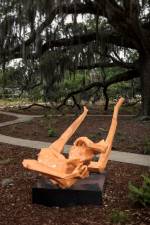 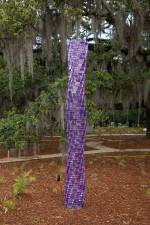