Motoi Yamamoto: Return to the Origin

Motoi Yamamoto: Return to the Origin

In Japan, salt is used to exorcise the bad spirits that are said to haunt the dead. With his installation of 120kg of salt at the Pola Museum Annex in Tokyo, artist Motoi Yamamoto instead uses the mineral as a way to remember the dead

For more than 20 years, following the death of his younger sister from brain cancer at the age of 24, Japanese artist Motoi Yamamoto has worked only with salt. It has been the medium through which he feels he can connect with her. “When I lost my sister, I explored ways to recollect my memory of her. In Japan, salt has often been used right after the funeral to cleanse the people who attended. The material happened to click with me. I feel salt will bring back the moment my sister left me,” he says.

In Japan in the past, death has been regarded as malevolent, and some religions used salt to purify people from the evil spirit surrounding death, a custom that still continues. Yamamoto, however, uses salt not to exorcise the spirits haunting the dead, but to get closer to the deceased.
Yamamoto, who was born in Onomichi, Hiroshima in 1966, and is now internationally renowned, has gradually developed his artform of salt installations that spread out over the floor like paintings. Despite the scale of his installations, he doesn’t use any assistants to help him. He puts the salt into a small oil drizzler, which he uses to draw lines of salt. The process is rather like piping icing on to a cake. Depending on the place and the size of the area where the work is to be installed, Yamamoto first hand draws a pattern, then scans the design in to a computer, which allows him to adjust the layout of the salt. This is probably the only process in his work that uses modern technology. The rest is time-consuming and done by hand. His direct intervention in the creation with salt is important. “Drawing with salt is the only way for me to be connected to my sister,” he explains. Salt has becomes the personal interface for Yamamoto and his dead sister.

He doesn’t confine his work to personal meditation, however. He makes the saltwork decorative. He spreads it to look like a tornado, an iceberg, a maze, or a lace pattern, and the pure decorative outcome of the work sometimes takes away Yamamoto’s meditational aspect and attracts the viewer with the pure beauty of the installation. “I like beautiful and decorative things,” Yamamoto says.

For his latest work, at the Pola Museum Annex gallery in Tokyo, he spent three days turning 120kg of refined sea salt into a drawing of a Japanese garden-like pattern over the 85 sq metre (915 sq ft) of the gallery’s floorspace. The installation, Floating Garden, is as fragile as the human memory of the deceased. And on the final day of the exhibition, as with many of his past installations, visitors can take part in destroying the work, each taking back a portion of the salt to release into the sea. “Not only connected with the image of death, salt is also regarded as the origin of life extracted from the sea water. By taking the salt from my exhibition and returning it back to the sea, visitors to my exhibition will take part in the cycle of life,” Yamamoto explains. By that time, the salt will not only be the artist’s personal memory of his sister, but each visitor will lend their own memory with their precious, loved ones and bring back their memory. 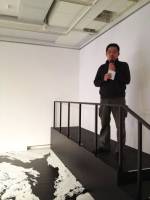 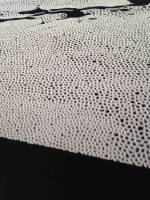 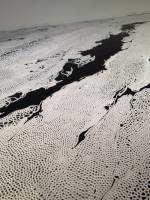 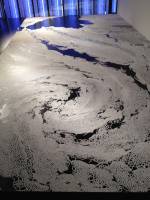 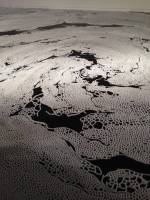