In her latest exhibition, the rather unwieldy title of which refers to the volume of space in the gallery vs that of the artist, Monica Bonvicini employs her large installations to consider notions of power, domination and control

“Before their first meeting, her killer established some rules: a classic BDSM protocol. She was not to ask questions. She was not to cover her legs with stockings or tights in His presence. She would give a truthful account of her response to all His commands after obeying. She’d assented with glee, because how can you play a game without rules?” This is from Chris Kraus’s novel Summer of Hate, and it’s true: for every game, there is a set of rules. Rules mean boundaries – the construction of a distinct space in which a different order applies. In her exhibition 3612,54 M³ VS 0,05 M³ at Berlinische Galerie, the Berlin-based artist Monica Bonvicini (b1967, Venice) plays with exactly this idea. So what are they, these rules, and what game are we playing?

The first instructions are dictated by the gallery. I must wear my coat or check it at the cloakroom, the security guard says sternly. The Berlinische Galerie being a public institution, its guards, as Bonvicini surely knows, are of a very particular old-school German stock: no bullshit, no fuss. They are not culture-loving pensioners, or 20-year-old art students slouched over their paperbacks. They are workers, and they mean business. “Go through that door to the exhibition,” she orders me. And I comply. 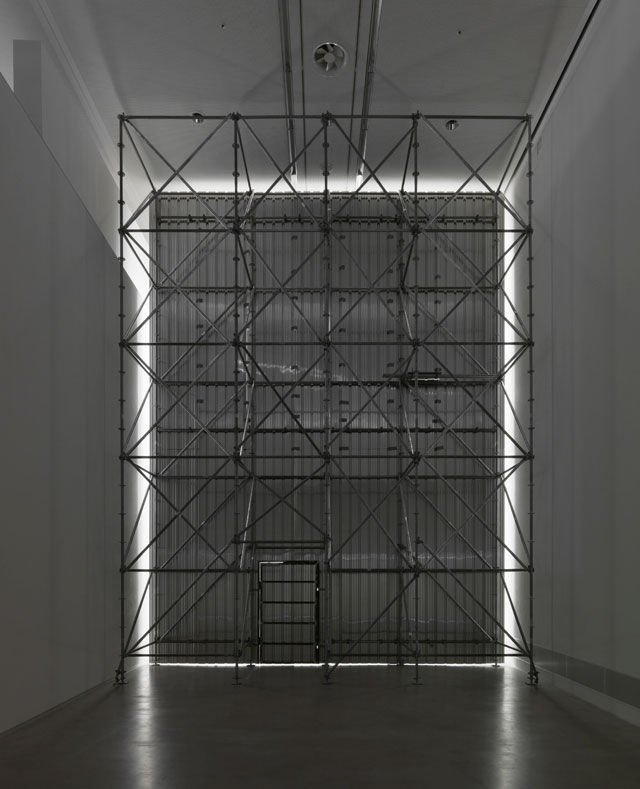 The door is slightly off centre in a massive wall of scaffolding and corrugated steel sheets that has been constructed about a fifth of the way into what would would otherwise be wide open space. Passing (2017), as the work is called, makes a backstage of the exhibition’s front room, casting it in shadow, and marking the transition into a different and harshly lit realm. Behind me, the door shuts unnecessarily slowly, before finally slamming with a loud bang. Clearly, the game has begun.

Two works from Bonvicini’s Diener series (2016-17) are leaning against the wall, one of them on a platform so high up that it is hard to see it. Is it being punished, or am I? While “Diener” is German for servant, what the list of works describes as “push-pull props” raise the question of whether these long devices made of simple industrial steel, but resting on exquisite brass discs, are objects for use or subjects for servitude. Both bear a fetishised mark of distinction – a black lacquered surface or some accessory attached to the handle – lending them the status of characters in a play. The show’s title, too, engages this dichotomy, 3612,54 M³ being the volume of the exhibition space, and 0,05 M³ that of the artist. Presented as comparable measurements, the “VS” sets up a struggle between two equals, whether subjects or objects. And not only between humans and inanimates, but also between the structures inserted into the gallery by Bonvicini and the building itself. 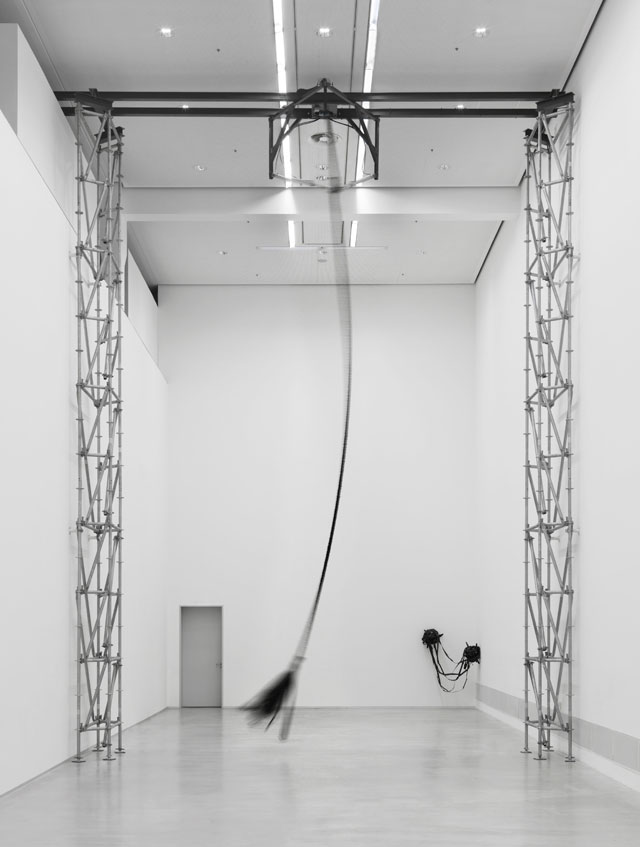 It is often said about an artwork that it “dominates” a given space. In the case of Breathing (2017), I use this word advisedly, and in the fullest sense. A scaffold installed from floor to ceiling across the breadth of the room supports a bundle of leather belts hanging from a thick black rope. At first the belts merely swing rhythmically, grazing the floor. Then, an air compressor lets out a hard sigh that sets the rope moving with ever greater force, causing the belt ends to spank either side of the wall. Consequently, the white cube has been “punished”, bruised with black stains. 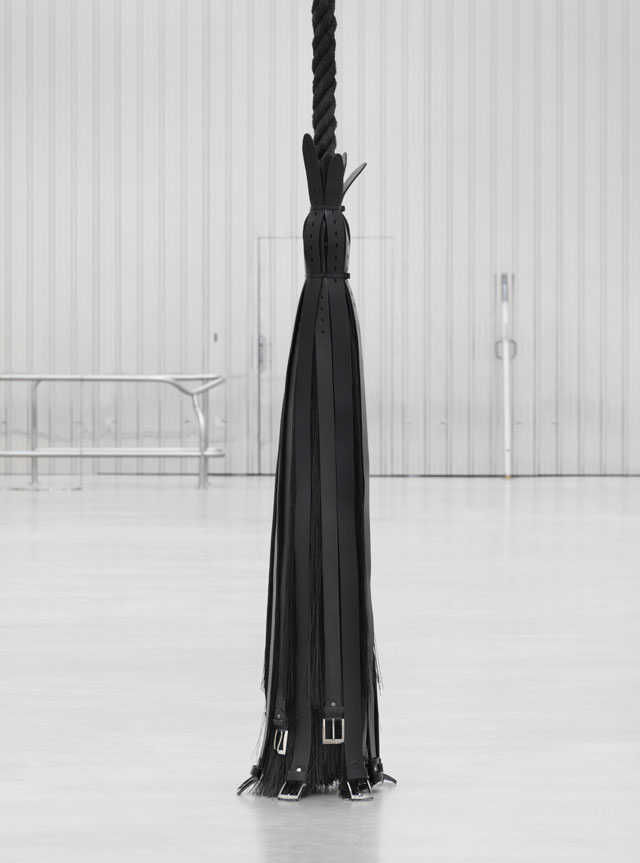 A central rule in SM practice is that the dom must always be sober. As such, Breathing is regular and methodical. The wound that it inflicts is not a volatile, random one, but highly specific – that particular leather smudge – and so is the control that it exerts over the room. Bonvicini’s sculpture is a strict but merciful master. I abide by the whip pendulum, politely waiting for it to pause, before I pass under the scaffold to approach Belts Ball (double ball) (2017), two large bundles of similar belts suspended in the corner. Here, the belts are no longer the inflictor of pain, but held in captive restraint for me to look at. The tables have turned. 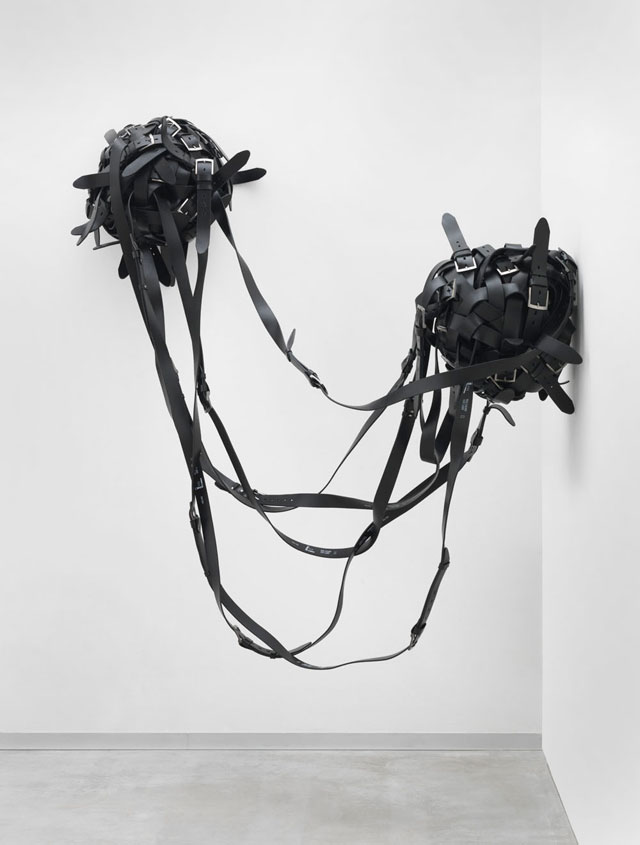 In the 1970s, sadomasochism would often be referred to as S&M, implying a stable boundary between its sadistic and masochistic aspects, but increasingly the ampersand has been dropped. As is also clear from the idiosyncratic origins of both tendencies, the incitements that drive them are as wildly indistinguishable as the pleasure and pain inflicted as they are put into practice. In Bonvicini’s exhibition there is no question strictly of pain, but rather control: a battle of assertions between walls, whips and spectators. 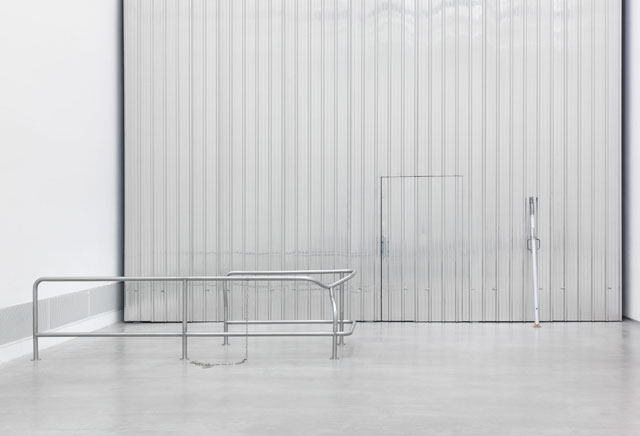 Waiting #1 (2017) is a rail, such as one that might organise a queue, but it is dented, as if damaged by collision. Waiting is the ultimate devotion, especially if you don’t know what you are waiting for, and you are not allowed to ask questions. Attached to the rail is a pair of handcuffs lying on the floor, which the stern security guard fastidiously rearranges into the perfect position: these handcuffs, in this way only. They are not to be understood as empty of a captive, but rather as a marker on the rail – somewhere between a certain colour of handkerchief attached to your jeans to signal the direction of your desire and the studded collar naming your humiliated status. 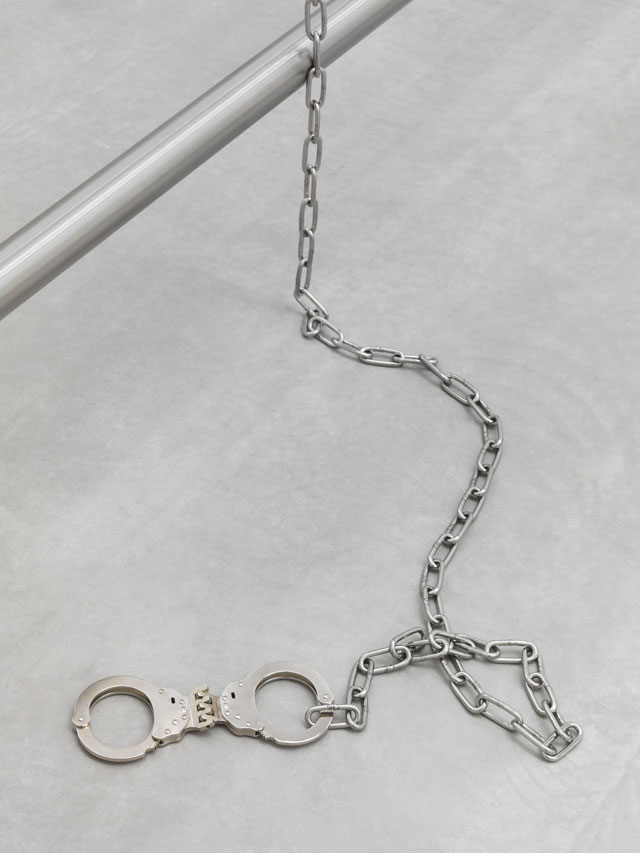 The labour performed by the guard is not only that of control, but of care. Looking after the exhibition, as a dog looks after a herd of sheep. But just as in Kraus’s novel, her dom became her killer, a sheepdog may suddenly worry its herd off a cliff. In Bonvicini’s exhibition, the boundaries are carefully heeded, but for that reason also clearly violable. It is this view into the abyss – this authoritative warning – that makes the show so titillating: to this point, and no further. Bonvicini knows exactly what she is doing. 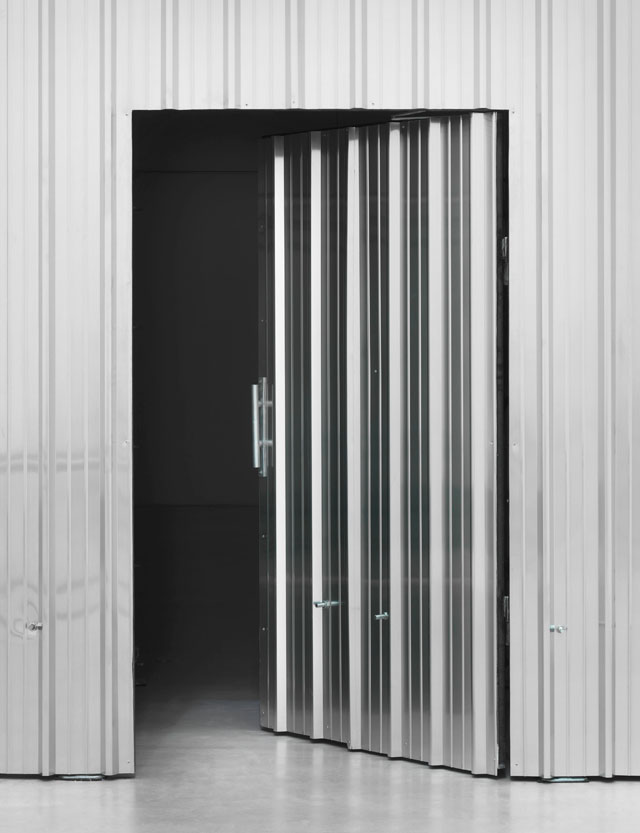 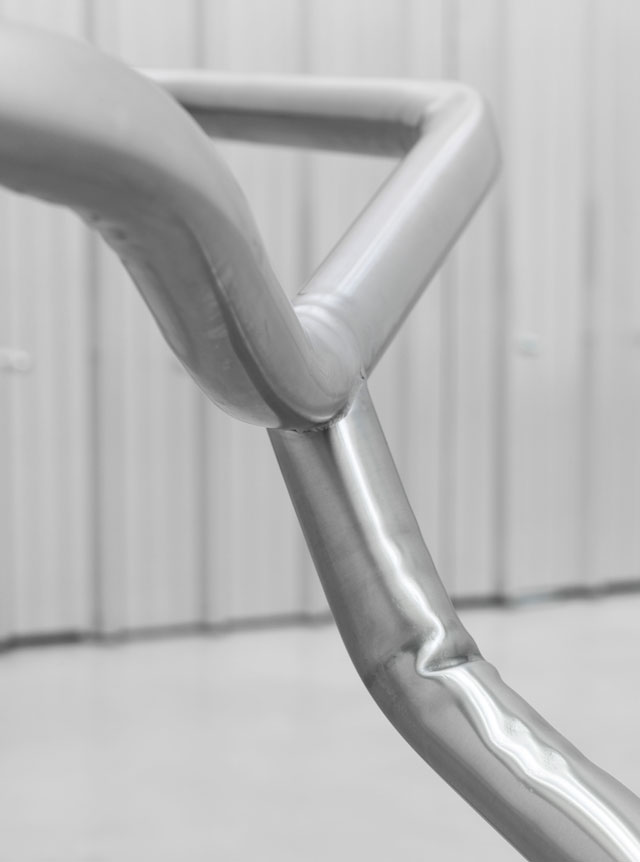