Mick Peter – interview: ‘The project was pleasingly indulgent, a free pass to propose almost anything’

Mick Peter – interview: ‘The project was pleasingly indulgent, a free pass to propose almost anything’

Amid the playful life-size figures at his new show, Gerroff!! (or User Feedback), Mick Peter discusses making sculptures that look like big drawings and how he hopes to subvert people’s interactions with public art 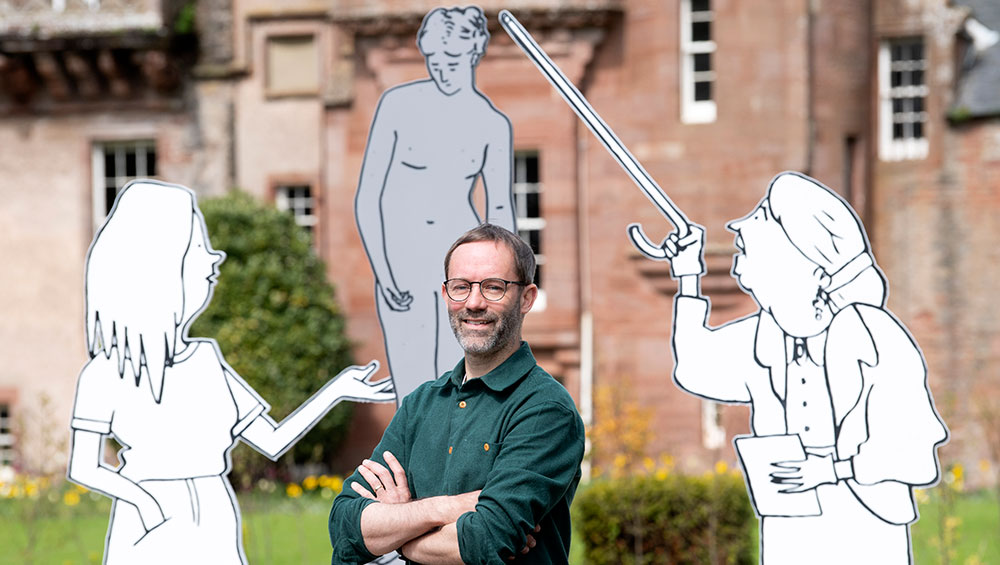 In the beautiful, newly restored grounds of Hospitalfield in Arbroath, Scotland, Mick Peter’s latest exhibition, Gerroff!! (or User Feedback), launches this year’s artistic programme and summer events. For Hospitalfield’s Annual Sculpture Commission, Peters has created a narrative with life-size sculptures that appear as two-dimensional, large-scale drawings, dotted around the landscape. His characters seem to play out connected, humorous scenes, and invite visitors to interact with them as they explore the grounds. The installation playfully subverts the typical relationship between the public and “fine art” in its incorporation of comic-book imagery and the inherent disruption of the categorical differences between cartoon drawing and sculpture. 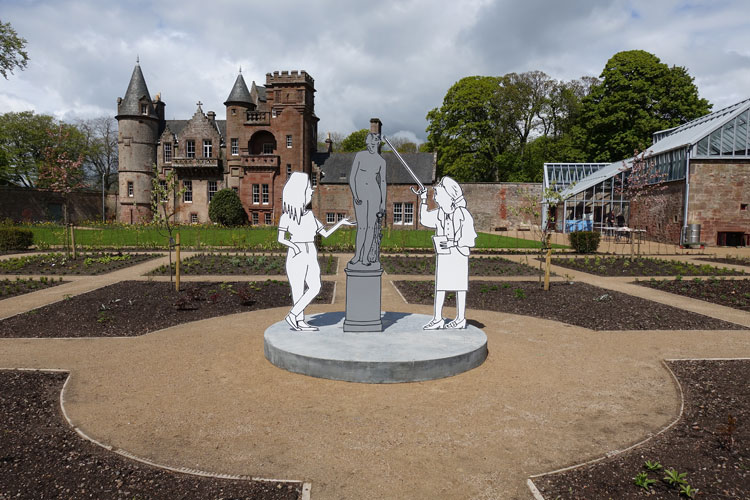 Peter, who was born in Berlin in 1974, now lives and works in Glasgow. He studied at Ruskin School of Fine Art in Oxford before going on to do an MA and later a PhD at Glasgow School of Art. With recent exhibitions at Bonington Gallery (2020), the Baltic Centre for Contemporary Art (2019) and Glasgow International (2018) an artists’ book for Les Bains-Douches (2020), and being a featured artist in Vitamin D3: Today’s Best in Contemporary Drawing (Phaidon, 2021), Peter is marking out his own space with his considered, but playful approach to drawing and public spaces. Studio International talked to him about his new work and the particular challenges of working outside at Hospitalfield, as the first visitors met his sculptural creations.

CS: Can you tell me a little about your process working with the team and space at Hospitalfield and how it influenced the installation?

MP: It was pleasingly indulgent, a free pass to propose almost anything. Of course, given that [Hospitalfield’s director] Lucy Byatt and [its programme and communications manager] Cicely Farrer know my work well, they must have been fairly confident that it wouldn’t be too horrendous! As we worked on the project for quite a long time (because of the pandemic), the quantity of work and the scale and ambition grew, until we ended up with three groups of sculptures responding to three different contexts in the grounds. 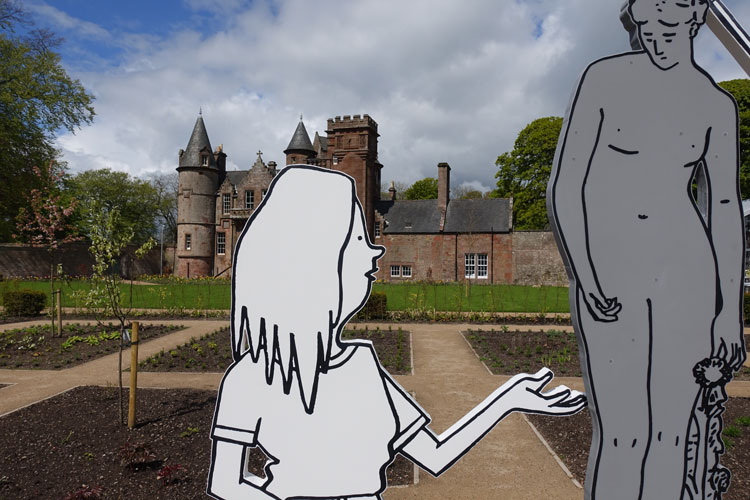 CS: Has your practice developed or changed with the opportunity to work outdoors?

MP: It’s got more expensive to make – the two things seem to go together! I also took more of an interest in public liability insurance than I had previously. But, seriously, all the work was made with Three Four Five Furniture in Glasgow: this was where I got expert help with the fabrication, as we needed to work with a big CNC machine [a “computer numerical control” machine cuts materials such as plastic or metal to a high degree of specification] to cut the drawings into the composite material. It was whole new process for me and for them (not the technology, more how we were using it).

CS: How long have you been creating these trademark life-size drawings, or sculptures, and how did you arrive at this decision?

MP: I’ve been making sculptures that look like big drawings for about 10 years. I think of each project on its own terms, so I don’t see them as a trademark per se as I do lots of different things, but I can see how it seems a bit like that. That’s fine with me, though. I arrived at them as a way of thinking of gallery space as a collage. I’ve often shown them with incongruous backgrounds or transformed spaces/walls. You end up composing a form of collage by taking photos of them. 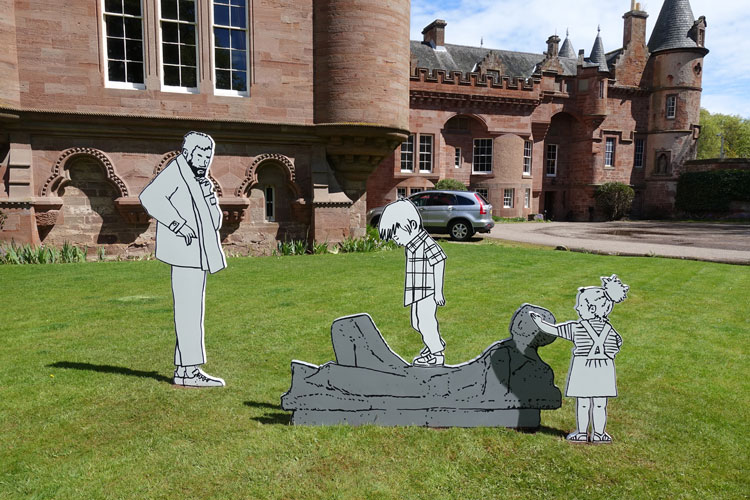 CS: There is a sense of “liberation” of your characters from the confines of pages and a smaller scale. Do you think that the recent lockdowns have affected how you (and others) relate to your practice? Does this factor into how you see your future work developing? In other words, would you liberate, or constrain, your characters further?

MP: It’s entirely contingent on the next project. I think I’ve made the work despite the restrictions, really. I hope the next big project will be when there are few restrictions, if any. All of this hasn’t made me change what I do hugely. It’s made me grateful to have something exciting to do while being unable to move around the country freely. But, then again, if you’ve got a good book or a sketchpad, you can’t be too miserable.

MP: No, there’s no recycling going on. Life would be easier if there were, perhaps. I’m always drawing, the characters grow out of sketchbooks. They could be an amalgamation of people I’ve drawn from memory, people on Antiques Roadshow desperate to pretend they’re not in it for the cash, my own photos, various things. In terms of a greater narrative, I think most artists are on a journey of some description, but I don’t think that’s necessarily what the work is about. I see each exhibition quite separately, but there are commonalities running throughout, of course, the rhetorical aspects, the suspicion of hierarchies etc. 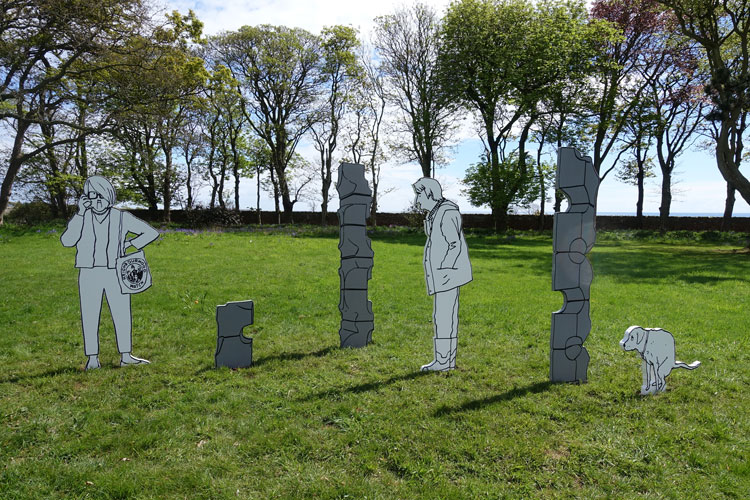 CS: Which materials have you used in these sculptures, and how did you decide to use them? Were there any particular challenges in making outdoor sculptures for Arbroath’s unpredictable climate?

MP: I’ve entered my wipe clean phase, maybe. These sculptures are made of a composite material from which you make posh kitchen worktops. The linework is incised into the white or grey and then filled with black. It’s not just on the surface, it’s like a terrazzo effect, or a stick of rock, if you prefer.

MP: Hospitalfield is closer to McDonald’s “drive-thru” …  luckily that hasn’t influenced the project. I did subscribe to the Beano as a kid – I liked the Bash Street Kids as it had the best drawing. I’d copy David Sutherland’s line work, trying to figure out what type of pen he used. The Beano also came with things like a Wham bar taped to the cover, which was quite exciting. So, aside from causing me to be familiar with some of Scotland’s weirder confectionery, there hasn’t been a great deal of influence on this project. Sorry, Plug, Smiffy, Sidney, Wilfrid et al! 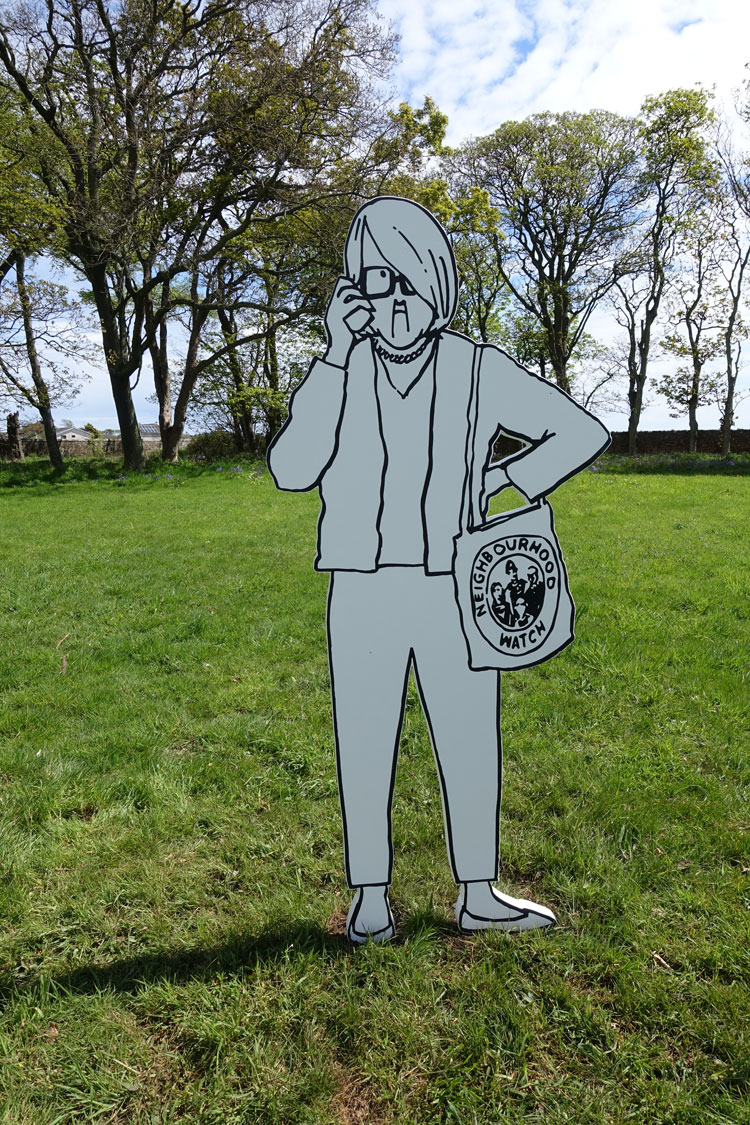 CS: Have you noticed anything amusing or unexpected in the interactions between visitors to Hospitalfield and your sculptures? How does the reception of your work, in a more general sense, affect your relationship to the work? Do you enjoy this communicative relationship with the audience, mediated through these fictional characters?

MP: I think when I’m there, people behave themselves and don’t take selfies with the work! It’s when people have a private moment with it that they choose how to interact with it. The title of the show is a joke about how people are expected to behave when confronted with public art and often don’t. I hope the conceptual joins are fairly apparent, so, while it’s all quite accessible, you can “travel” a bit with it intellectually.

• Mick Peter: Gerroff!! (or User Feedback) is at Hospitalfield, Arbroath, Scotland, until 31 October 2021. 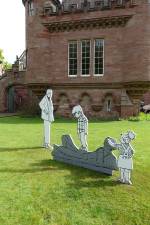 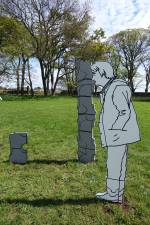 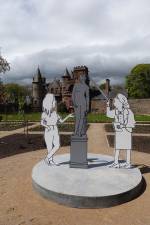