Michael Sherrill – interview: ‘I’d call myself a student of art’

Michael Sherrill – interview: ‘I’d call myself a student of art’

Sherrill talks about his current retrospective at the Smithsonian’s Renwick Gallery, why he calls himself a “material-based artist”, being influenced by Matisse – and the joy of home-grown tomatoes

Portrait of Michael Sherrill, courtesy of the artist. Photo: Scott Allen at Hang the Moon Photography.

The Michael Sherrill Retrospective at the Renwick Gallery of the Smithsonian American Art Museum, organised by the Mint Museum, brings together a remarkable collection of Sherrill’s work, spanning his more than 40-year career. The exhibition is arranged in four sections – Early Work, Teapots, Studio and Contemporary Sculpture – including 73 objects from Sherrill’s earliest teapots and functional clay vessels to his most recent botanically inspired sculptures. Many of these botanical pieces were influenced by Sherrill’s home: the plants native to the landscape around his studio in Bat Cave, North Carolina, such as rhododendron, mountain laurel and apple trees. He has also created fictive species from his imagination, such as Bloom at Night (2008). 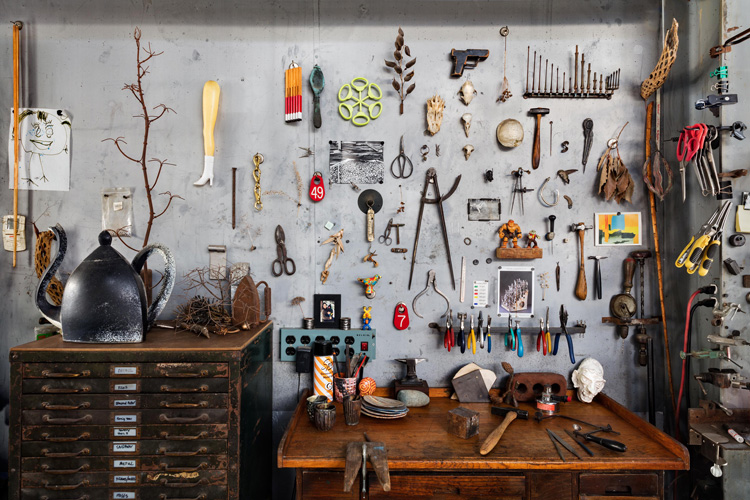 Interior of the artist’s studio, 2017, courtesy of the artist. Photo: Scott Allen at Hang the Moon Photography.

There is so much to admire in Sherrill’s work, and much to consider, too. In my interview with him, he says: “I love being able to connect with people through my work. I love the idea that someone might look at something I made and continue thinking about it after they’ve left the gallery; in a way, they take the work home with them.”

What can be seen throughout his work is an exceptional skill and mastery that allows him to create innovative forms, seamlessly combining clay, glass and metal into his compositions. Sherrill (b1954) has even created his own line of tools: almost every tool he owns has been modified to meet his needs, and, in 1997, he founded Mudtools, a line of hand-held ceramic tools. “The tool-making become part of the creative process,” he says. “It’s also become part of the process that brought me pleasure.” 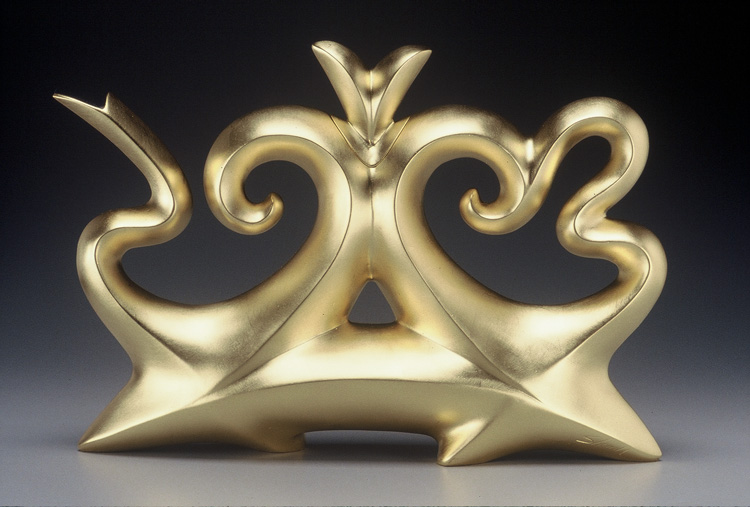 Cassie Davies: When did you become interested in pottery?

Michael Sherrill: I started out as a maker, even as a little kid. I grew up around people making and building things. My dad was an inventor, and he was happiest doing the kind of work that kept his mind busy with problems to solve. My oldest brother also had a very creative personality, and his interests were intriguing to me as a child – in the late 60s and 70s, he opened windows for me to the art and music scene in New York City.

I’ve always been highly visual; I’m impacted by things I see. When I was a kid I had real difficulty with spelling, I was a slow reader. Though I didn’t have the words for this as a kid, now I realise that the way I understand and perceive the world is visually. Even now, if I spend all day in my studio working on a piece, fully submerged in the visual world, by the end of the day I can hardly talk. I can’t put words together.

CD: How did you start out as a potter?

MS: I started out making useful things to eat from. I learned about my material, clay, and became confident working with it. Eventually, after reaching a certain mastery of the material, I was drawn to the next step, and I began experimenting more with form and style.

CD: I read somewhere in the exhibition that, with your botanical sculptures, you are aiming to achieve “natural narratives”. Could you tell me what you mean by this?

MS: I love the interaction between people and materials, and there’s always a story being told simply in the action of deciding whether something is or isn’t worthy of your attention. Why are some materials worth protecting more than others?

Most of my work tells personal stories. Real life is there for each one of us. I tend to be somewhat optimistic, but also a realist: where I see difficulty and struggle, I see the power to overcome. I’m interested in that source of power in people and nature – like in my Bloom at Night series, which was influenced by night-bloomers that come and go during the night. Their beauty seems so fragile yet hardy, like they could live through anything. Another example is a piece called Remnant, which I made for a friend-client. She worked in an NGO with Indigenous people, and part of her work was dealing with rebels. It was a difficult experience for her, and Remnant is about her story. The Remnant is like a storm that comes and damages, leaves evidence of that destruction, but at the same time there’s life. 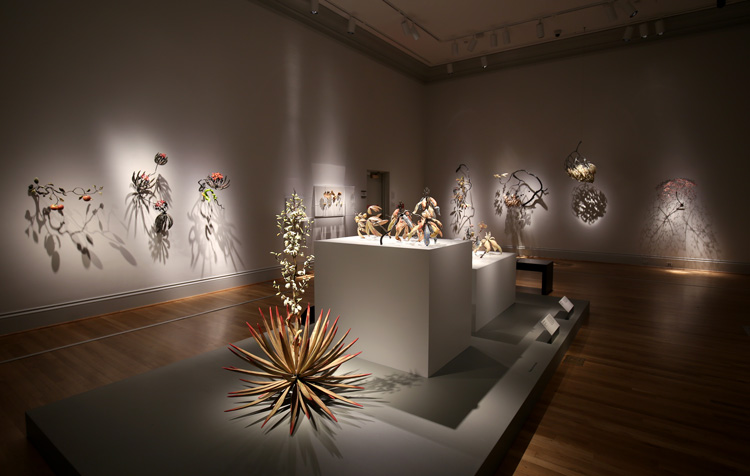 CD: I was reading about the $15,000 teapot  – Fire Box Tea – and how this piece became part of the debate on art v craft. What do you think about these labels? Do you feel engaged in this debate?

MS: It’s almost like a rock’n’roll band being picked apart by the critic. Sometimes I don’t think the musician or artist can even give words to what they’re doing until later. I like the band Starfucker, for instance. I love what they do, and I’ve often tried to figure out what’s going in their music – it’s poppy, arty, electronic, it does all these different things. It’s hard to fit their music into a box, and that’s one of the reasons I like them. It’s easier for me to describe my art and frame it like music than to frame it as art or craft. Making music takes a craft to be able to play an instrument and write music. Do we call this creative endeavour “art” or “craft”? I call myself a material-based artist; meaning that material plays an integral part in my expression. It means having a certain degree of facility with the material to express qualities. 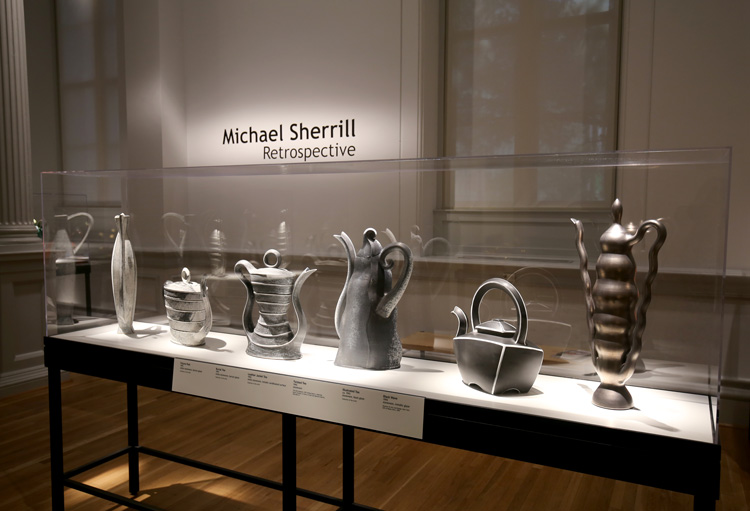 CD: Could you speak a little about your influences?

MS: Though I don’t have a formal education in art, I’ve been steeped in it my entire life, and I’d call myself a student of art. Matisse’s work has had a long-term effect on me. In my early 20s, I was very taken by Matisse’s cut-outs. After seeing them, I began to flatten my work into more two-dimensional forms.

I was also influenced by traditional potters, who taught me that forms can have emotions or attitudes: the German potters who worked here in North Carolina, their forms are very strong and upright, a straight-backbone kind of feel. The potters from a more English and Scotch-Irish tradition, their pots are easier, relaxed. 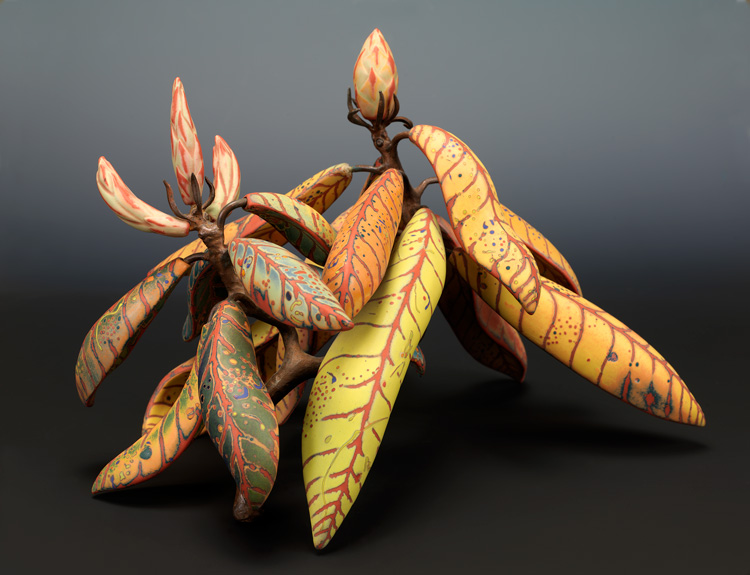 When I moved into my studio here in North Carolina, in a beautiful area of the natural world, it really affected my colour palette. You see this in the series of work where the colours run through – I call this technique “braided”, where the colours transition from orange to red to yellow. It gives this blush.

I’m not always aware of my influences, though. Sometimes I see the work I’m doing and then I find it’s connected to something out there. For example, I was doing botanical work having not seen the Blaschka Glass Flowers at the Harvard Museum of Natural History; a collector of mine made the connection. 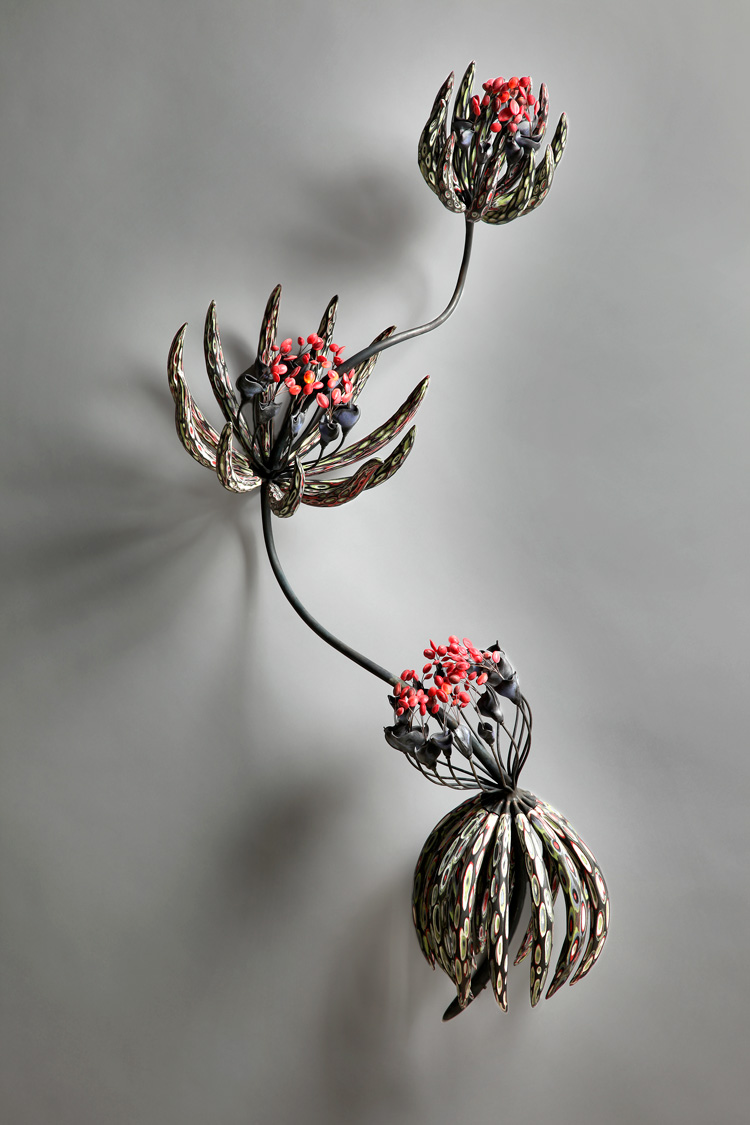 CD: There are so many stages in the process of making an artwork. And for many of your sculptures, you use different materials. You have even made your own line of tools. This might be a hard question to answer, but is there a part of the process you especially enjoy?

MS: In terms of materials – clay, for instance, you make it, you fire it, you can post-work it after the fire, but it’s pretty set. Metal, though, I could build an armature and put it on the wall while continuing to make components for it. I love that I can live with it for a while and then return when I want to make adjustments. I can see it fresh again after being away from it for a couple days, can move something here just a little bit more. 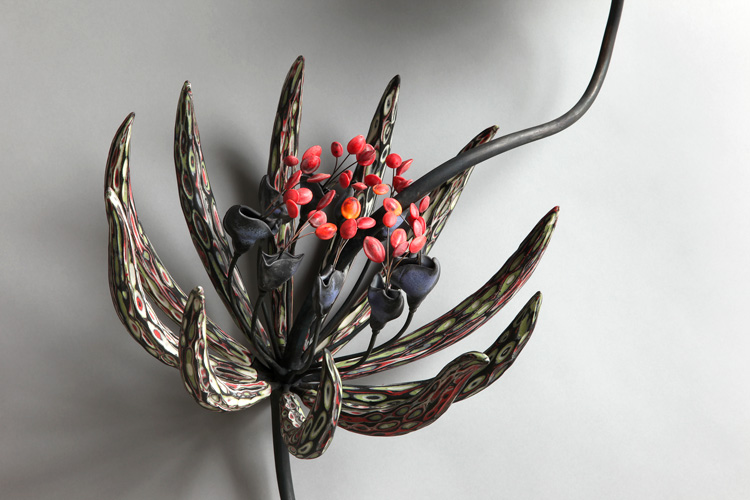 I must say that I take a great deal of pleasure in the assembly of an object, right at the end. There’s something mysterious in that moment of adjusting and arranging that I don’t know how to express. It pulls me way out of myself. Every once in a while, I’ll look back at something I made and wonder how I did that. I love being surprised by my own work.

It’s hard to carve out the time to work on art and really be submerged in it, and not be asked questions or be pulled away from the work at all. But that power of conceiving of an idea, and figuring out how you’re going to do it, executing that idea, and finishing that idea – as human beings, we need that. That’s why there’s so much hope for the creative process; it’s so important to experience the satisfaction of walking through that process and reaching the end. For example, I plant and care for tomatoes all summer long, and by the end of the summer, I’m eating tomatoes that came right out of my garden. I think that’s pretty wonderful. 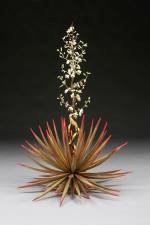