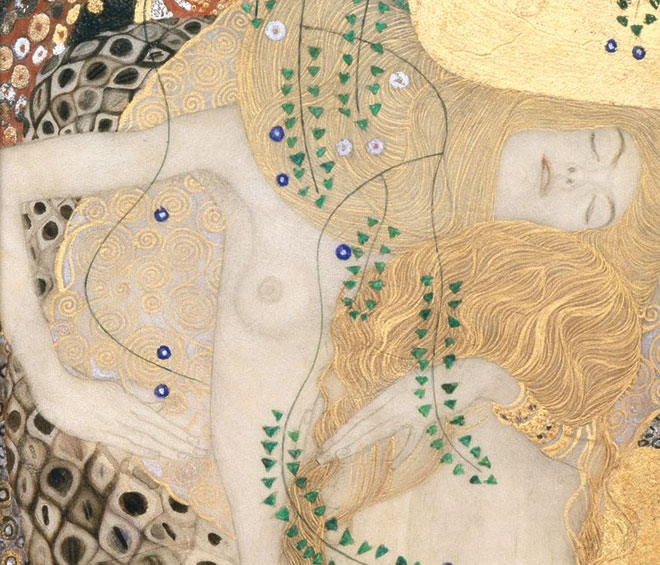 In 1898, Gustav Klimt (1862-1918) designed the poster for the first exhibition held by the newly founded Vienna secession, of which he was a founding member and president. The depiction of the Greek hero Theseus wrestling the Minotaur symbolised the intention of the young avant-garde movement to break with the past and rebel against the out-dated structures of the Künstlerhaus. On the right-hand-side, standing watch is the figure of Pallas Athena, the goddess of wisdom, craft, and war in ancient Greek mythology. Turned thus into a sphinx-like demon, an image that was repeated on the catalogue for this first exhibition, as well as on bookplates for the movement, the goddess emerged as the patron saint and symbol of the Vienna secession. Klimt’s use of symbolism embodied one of its key ideals. 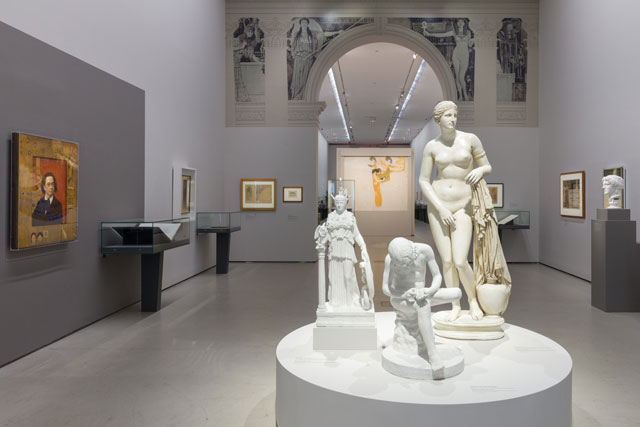 Born into a relatively humble family, Klimt left school at the age of 14 and thus would not have been educated in Ancient Greek language or mythology. From an early age, however, his art is teeming with references to classical antiquity. For example, Altar For Dionysus (1886-88), painted as the lunette of the south staircase in Vienna’s Burgtheater, a sketch for which is on show in the exhibition, depicts a combination of nude and draped figures and putti, classical architecture, and flora, such that, I admit, I first mistook it for a Lawrence Alma-Tadema. From 1890, Portrait of Joseph Pembaur is framed in a magnificent golden truss, with an ionic column, atop which stands a music-making god (Pembaur was a conductor, composer and music teacher); the god is drawn directly from depictions of Apollo on Attic amphorae, also seen in the manuscripts of Monumenti inediti, kept in the Österreichische Nationalbibliothek, where the artist may well have seen them. There evidence, for example, from the manuscript collection records at the Wienbibliothek im Rathaus that, in 1910, Klimt ordered up a book on ancient Attic vases. 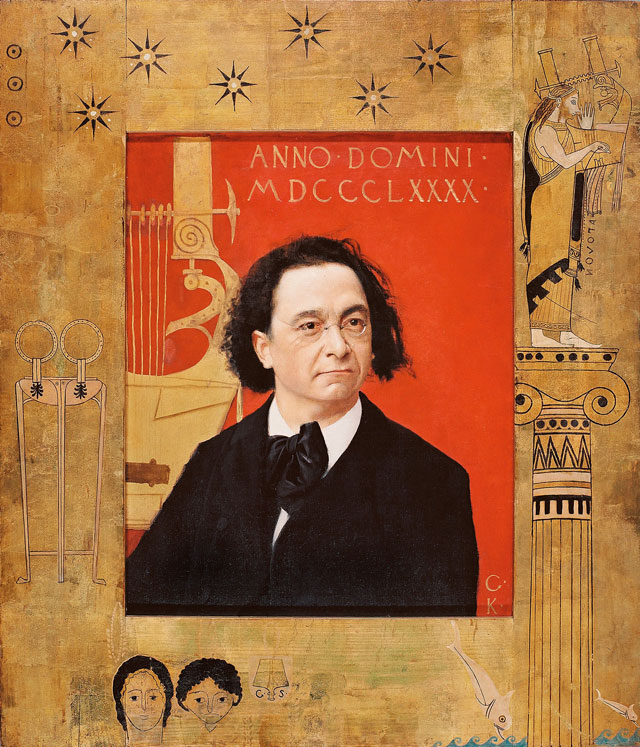 The first room of this fascinating exhibition includes a superb marble Sarcophagus of the Muses (180-200AD), from the Kunsthistorisches Museum Wien, alongside plaster casts of numerous classical sculptures, which, in Klimt’s time, were housed in the Lower Belvedere (the very venue for this exhibition), and sketches by the artist showing a close study of these works. With the arrival of the new century, Klimt’s renderings of classical antiquity became increasingly liberal and symbolic, stylised and bearing traits of art nouveau. Throughout, however, his rigorous and sparse use of line mirrors that of the ancient vase painters – clean and contoured outlines kept empty inside. As a reviewer wrote in the Neues Wiener Journal in 1909: “As an ideal figure he has dissolved the female body into magnificent, decorative lines. All that is coincidental, all that is individual and characteristic falls away; only the truly typical, the sublimated extract of the modern type of woman, as the artist has established it, remains in a complete purity of style.”1

A wonderful example of this is offered by the section of the Beethoven Frieze (1901-02) known as The Longing for Happiness, a life-size copy of which was made for the Belvedere museums in 1984. Here, the floating – and empty – female figures graze the very top of the composition, leaving about five-sixths of the frieze beneath them blank. Perhaps this is a metaphor for the emptiness of life, as we long for a happiness we might never achieve. Whatever, this design principle also parallels that of the ancient painter who made a large mixing vessel (c500BC), also on show here, where a tiny figure floats at the very top of the large black expanse.

The guiding motto for the 14th exhibition of the Vienna secession in 1902 was the notion of the Gesamtkunstwerk and the members looked to the art of the ancient temples as their model. The Beethoven Frieze, inspired by Wagner’s interpretation of Beethoven’s Ninth Symphony, is exemplary of this. Another section on display, The Hostile Forces, shows the invincible giant Typhon, three gorgons, and the Deadly Sins (lust, incontinence and death). This was judged as pornographic by many at the time, largely owing to the lascivious eroticism of the gorgons, who do, indeed, look like pubescent girls, with their protruding hips and small, shapely breasts. 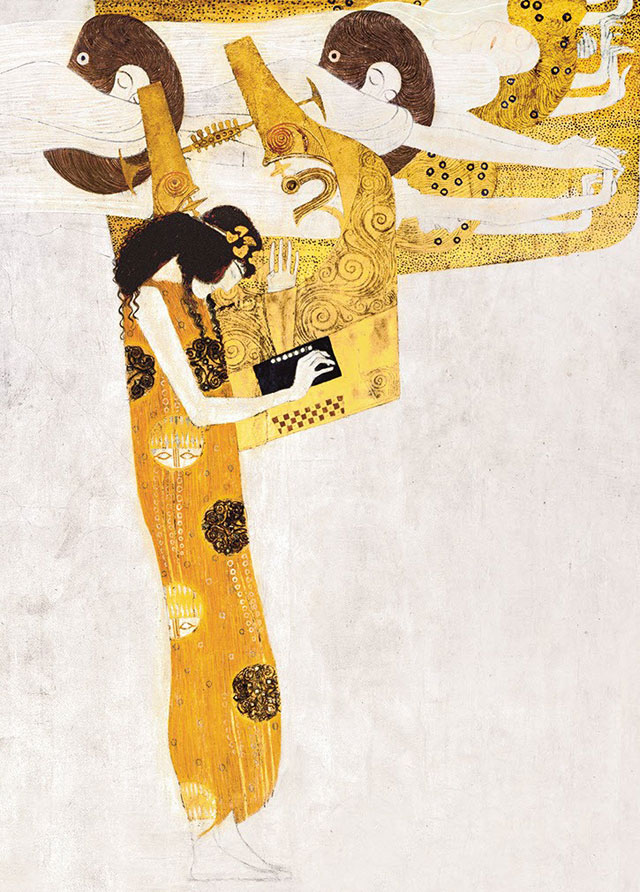 Alice Strobl, in the second volume of her catalogue raisonné of Klimt’s drawings,3 notes that the 15 drawings included in the editions of the Dialogues are most likely to have been selected from a larger number of potentials but, to date, she has been able to trace only nine of the original sheets. In total, about 50 drawings by Klimt showing women in the act of self-pleasuring are known.4 The exhibition’s final space is filled with extracts from eight of the Dialogues, accompanied by Klimt’s illustrations and relevant Attic pottery. The drawings are superlative: beautiful and powerful in their depictions of precisely these attributes, beauty and inner power and strength. His drawing to accompany Dialogue IX, A Poor Sailor’s Love, for example, shows a woman on her back, one arm reaching out above her thrown-back head, a knee raised, and the fingers of her other hand frantically moving – and the movement really seems to flow forth from the page – across her genitalia. Her dress is rumpled and the pearls around her neck symbolise her climax. Klimt’s other drawings on show variously capture peaks of bodily tension and the ensuing moments of involuntary relaxation; sensuality and sexuality; athleticism and eroticism.

Overall, the exhibition is relatively heavy on text, but for anyone with an interest in either Klimt or late classical antiquity – or, indeed, both – it is thoroughly engaging and enlightening. The accompanying publication5 is a superb take-home, with insightful essays, elucidating texts to accompany the many ceramics, and an appendix with an English translation of the full 15 Dialogues. While Vienna is full of Klimt masterpieces, and the real Beethoven Frieze can be seen across town in the Secession building, this show puts everything fully into context and highlights the classical influences on his work – along with his own increasingly free interpretation thereof. It is academically fascinating to see this development from early studies and sketches made, no doubt, in this very museum, to the looser, symbolist works that made his name. And, even as a die-hard fan, with a library of books on his erotic sketches, there were still some surprises unknown to me. If you can’t go, get the book; if you can enjoy both, please do! 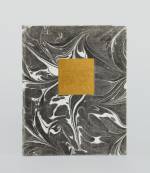 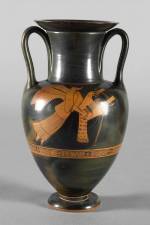 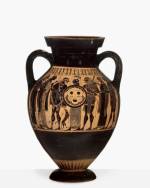 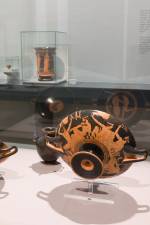