The trouble with the Victoria and Albert Museum’s exhibition Chinese Masterpieces: 700-1900 is that each piece truly is a masterpiece. It presents some of the most defining pieces of Chinese art history; the most recognisable names and the most beautiful objects all representing the mastery and skill of their respective dynasties.

Placing such significant pieces from such varying periods side by side is a challenge for the curator and the audience. Works are curated through themes that roughly correspond to the Chinese dynasties from Tang (618-907) to Qing (1644-1912). Each dynasty is summarised in an attempt to educate the audience on the historical and political context behind the works. The nature of the “masterpiece” is first that the work is of the highest quality and most skilled original style, but, second, most pieces also hold complex contextual symbolism and narrative stories, which add layers to what is seen. For the audience, the exhibition remains very much a visual experience, as the concentration of masterpieces allows less room for focus and context.

The first masterpiece of the exhibition sets the bar high. Court Ladies Preparing Newly Woven Silk (1101-25) is a silk handscroll believed to be painted by Emperor Huizong (1082-1135), a prestigious and cultured emperor of the Song dynasty (960-1279). The scene depicts a group of beautiful palace ladies making silk. Wearing pastel-coloured robes, they bend and stretch to different heights holding various implements and revealing the process behind sericulture. Out of chronological context in the exhibition, this piece serves the practical task of demonstrating how silk was made and its status as part of palace life. The chronological thread begins with the Tang dynasty where colourful silk paintings of bodhisattvas, apsaras and various deities represent the Buddhist art of the period.

The character of the silk is revealed in the masterpiece Bodhisattva in Monastic Dress Standing at Prayer (875-925) from the Guimet collection. This is a rare double-sided silk painting used in religious ceremonies. The arched eyebrows and decadent headdress of the curvaceous bodhisattva emerge from a palette of warm colours. A sensuously pink lotus grows beneath his peachy foot, which grazes the patterned border. The work is displayed between two pieces of glass so the viewer is able to see both sides and also observe the unique aesthetic qualities of the silk.

Another masterpiece takes us down the Silk Road with a travelling monk. A low-lying tiger with amber eyes slinks alongside the monk, who is heavily draped in layers of cloth, a shoulder bag and a sack held on his back. Steam plumes in a swirl from his backpack, and the image is detailed with drops of faded colour. An Itinerant Monk Accompanied by a Tiger (800-900) widens the context of Buddhism and the silk culture at a time when the Tang Chinese exerted a huge influence on trade and religion across the world.

The exhibition fast approaches 950-1250 and the Song period, in which landscapes and the natural world became popular subjects. In contrast to the previous room, painters turned to monochrome ink painting, evoking the same sentiments through their art as calligraphy and poetry.
A masterpiece entitled Nine Dragons by Chen Rong (1189-1268) is evocative of the power of monochrome ink painting, which elevated art to the status of calligraphy. Scaly skin unfolds from right to left across the handscroll like an undulating wave. Dragons emerge from cloudy shadows and breaking waves from which froth curls diagonally across the scroll.

Moving into the Yuan period (1271-1368), the exhibition explores the conflicts of artistic production during this era. Unless they wanted to work for the Mongol Yuan, many Chinese court painters found themselves out of business. Wealthier literati painters took to the mountains to live monk-like existences among nature; others had no other choice but to work for the new court. Two pieces present a brilliant contrast. The first is Emaciated Horse (1250-1307) by Gong Kai, in which Gong paints a loyal steed in decline after leaving the royal stables. His ribs project through his thin grey coat and he is left dreaming of his former pride. Gong refers to the decline and proceeding struggle of the scholar officials during the regime change. The second is Groom and Horse (1296) by Zhao Mengfu, which shows a fat, jolly horse, who is well-fed and parked beside his groom. Zhao was an artist working for the Yuan and gave this piece as a gift to a higher-ranking Yuan official. It was a thank you and also a plea for future support from the next generation of rulers. The juxtaposition of these images conjures a clever narrative describing the political conflicts facing the artist during the change of rule.

Humorous highlights of the exhibition include Monkey (1127-50) by Mao Song and Slumbering Budai (1240-60) by a Zen monk, probably Muxi, an artist of the Yuan period. The former shows a plump monkey, delicately furry and painted in monochrome ink and highlighted with gold leaf. The latter depicts a “legendary pot-bellied Chan master” named Budai, who relaxes back on to his lumpy sack. Remounted in Japan in opulent materials, both are simple ink paintings emboldened and enhanced with opulent materials of gold and navy patterns.

Copying and reinterpreting the Old Masters within the period (1600-1900), we see important works from Wang Yuanqi, Wang Jian and Wang Hui. The Colours of Mount Taihang (1669) by Wang Hui shows the characteristic landscapes painted by the northern masters. The rough, rocky terrain is finely detailed and the craggy mountains are outlined in inky black. The whole landscape uncurls like a dramatic storm. Finally, looking to the west and to the onset of the Qing dynasty (1644-1911), themes diversify and can no longer be generalised as various schools appear across China each influenced by their location, urban individualities and societal variations.

The masterpiece of Bada Shanren, Flowers on the River (1697), was painted when he was 72 years old. The rough handling of ink holds a hypnotic sense of rhythm as brushstrokes scratch and fade along the handscroll. This work is powerful in its liberal control of the brush and through the artist’s personal response to the subtle variations of nature. In a completely opposite style, the densely detailed, minute realism of Prosperous Suzhou (1759) by Xu Yang is a panorama of urban life. The masterpiece documents the success of Suzhou as an urban society, recording the busy routines of the officials, transactions of trade and the new merchant class, who all carve their own parts of the city. Although attributed to Xu Yang, it was painted by a team of court painters, who would have worked on separate parts at once. Existing in adjacent displays, these masterpieces could not be more diverse. Ending as it began, on a high point, the final masterpiece of the exhibition is Ren Yi’s, Portrait of Gao Yongzhi (1887). Gao Yongzhi is painted in profile, a bold choice that broke from Chinese traditional formats and referenced the photographic techniques of the west. This work opens up a whole new set of questions, definitions and contextual queries that remain unanswered by the exhibition.

Proclaiming itself as “the most ambitious survey of one of the world’s greatest artistic traditions”, this audacious exhibition certainly achieves its goal. Curator Hongxing Zhang must be saluted for securing and exhibiting these masterpieces. However, confronting masterpiece after masterpiece, I could not help but feel exhausted by the end of it. 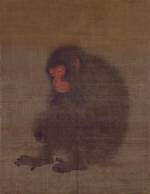 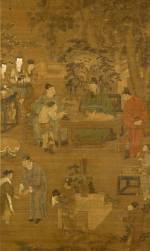