Mariko Mori: ‘The ring is a symbol of oneness, completeness and eternity’

Mariko Mori: ‘The ring is a symbol of oneness, completeness and eternity’

The artist talks about her mission to place site-specific artworks honouring nature on the six habitable continents, and her involvement with the cultural programme of the Rio 2016 Olympic and Paralympic Games

In an interview with Studio International in 2013, Japanese artist Mariko Mori (b1967) said that the main intention of her work was to share the idea that we are all connected and we are one. In 2010, she had co-founded the not-for-profit Faou Foundation, which sets out to gift monumental art installations to promote environmental awareness around the world by installing site-specific works on each of the six habitable continents. She is currently installing the second of these works, Ring: One With Nature, suspended at the top of the 58-metre-high cascading Véu da Noiva waterfall in Muriqui, Mangaratiba, in Rio de Janeiro State, Brazil. Although a permanent gift to the nation, the work will be unveiled as part of the cultural programme surrounding the Rio 2016 Olympic and Paralympic Games. Signifying oneness, completeness and eternity, Ring certainly embodies Mori’s and the Faou Foundation’s ethos.

In a Skype call from Brazil, Mori spoke to Studio International about the ideas behind Ring: One With Nature and how they have been realised.

Anna McNay: You founded the not-for-profit organisation the Faou Foundation, in 2010, with the aim of creating six art installations around the world – one on each of the six habitable continents – as homages to the natural environment of each locale.

Mariko Mori: Well, actually, it’s not necessarily only six. When we develop to become a bigger foundation, we would like to invite other artists to become involved. So, really, it’s about having a site-specific installation per continent: six sites, but not necessarily only six works. For example, at Seven Light Bay on Miyako Island, Japan, there will be a pair of works. In 2011, we installed Sun Pillar; the second work, Moon Stone, will hopefully be installed in 2020.

AMc: I see. But Ring: One With Nature will be the second work that is actually realised?

AMc: Was it planned from the outset to coincide with the Rio 2016 Olympic and Paralympic Games?

MM: Well, to cut a long story short, no. I had a dream seven years ago in 2009 with a vision of a ring on top of a waterfall. At that point, I didn’t know that the Olympics would be hosted in Rio – no one knew. In 2011, I was invited to do a travelling exhibition in Brazil – Brasília, Rio, São Paulo – and I started to search for the site of the waterfall. Then I discovered that Rio had been appointed the next Olympic venue after London. We started to discuss our official involvement in December 2014, but our partnership wasn’t officially formed until May last year.

AMc: Can you tell me a bit about the significance of, or meaning behind, the work?

MM: The ring is a symbol of oneness, completeness and eternity. I wanted to create this work to honour nature. The Faou Foundation’s mission is to create, produce and gift a site-specific installation per continent to honour nature. I had been researching historical culture and ancient civilisations and we wanted to continue the tradition of the remote ancestors of honouring nature and symbolising the connection between human and nature. Ring, for us, is like a new ring to be added to the five iconic Olympic Rings, which symbolise the unification of all the nations and ethnicities, celebrating peace and connecting people around the world. We wanted to add a new ring to connect us with nature.

AMc: Ring will change colour from blue to gold as the sun moves across the sky.

MM: Yes. The ring itself is designed to change colour according to the different angle of the light from the sun. So when the sun moves, it reflects the different colours in the ring.

AMc: What is Ring made from, and how did you go about constructing it?

MM: It’s made of layered acrylic. It was produced in Japan by Nippura, which is a leading company in the world for producing large aquariums. Layered acrylic is very durable and very sustainable.

AMc: How involved were you in the construction process?

MM: In order just to get the right colour, I worked with them for two years. It’s a new technique that we developed together to get this special effect of how the colour changes with the light.

AMc: You incorporate a lot of science and space knowledge into your works. How much has gone into this piece?

MM: The scientific part was really the development of the material. But applying the colour was something that had never been done before. Ring is a culmination of much research into how to achieve that effect.

AMc: Did you have to go to Rio to experiment with the light there, or was all the research undertaken in Japan?

MM: The fabrication of the layered acrylic was done in Okinawa, which also has very strong sun, so we were able to test the colour variation with this sunlight. The carving and mirroring was done in a different part of Japan, which is closer to the international seaport, from which the work could be sent to Rio.

AMc: Presumably it wasn’t sent as one giant piece, but was reassembled on arrival?

MM: The ring itself is one giant piece measuring three metres in diameter and weighing three tonnes. Then there is a support structure, which is also specially designed with the help and collaboration of structural engineers and environmental engineers. We came up with a special zinc and Teflon coating to really protect the structure in the environment. Each leg weighed one tonne. These were fabricated in the US and also shipped to Rio. It’s been a very collaborative process as something like this has never been done before. The completed work will be gifted to the Instituto Estadual do Ambiente [State Institute of the Environment, Brazil] and the State of Rio de Janeiro. The institute’s role is to protect the environment, so we had to go back and forth to get their approval.

AMc: Were there any objections to having the work installed at the top of the Véu da Noiva waterfall?

MM: No, everyone was very happy. In Brazil, there are many places that are environmentally protected, where, for example, you cannot build houses. The water is also protected. I believe in the Japanese tradition of Shintoism, which is about worshipping nature. They are happy to receive the work because they share our mission of honouring and protecting nature.

AMc: You made a smaller version of Ring in 2012, which was included in your exhibition at Japan Society, New York, a year later. Was that work a maquette for this larger one, or a piece in its own right?

MM: It is a maquette. I also showed this piece in my exhibition at the Royal Academy in 2012, where I created an artificial waterfall for it. At the Japan Society, the work was placed above their artificial waterfall in their courtyard garden. The maquette was not made of layered acrylic. It was made from Lucite, and the opalescent effect was like a sample for the colour I wanted, which I then tried to achieve with the layered acrylic.

AMc: Are you already working on the third piece for the Faou Foundation? Do you know what it will be?

MM: I have already begun researching sites for South Africa and Western Australia, but it takes a long time. For example, for the site in Rio, I started looking in 2011 but only found it a couple of months ago. This project has evolved quite organically so I can’t really tell how things will turn out until shortly before completion.

AMc: So, presumably, the concept for the work comes first and the location comes later?

MM: For the last two projects, yes. But we don’t really have any rules. We just want to honour each aspect of nature on Earth. The first one was the sea, the second one was a waterfall.

AMc: You mentioned also that the first installation, on Miyako Island, has a second part to it.

AMc: Is there therefore an optimal time to visit each of these works to see these effects?

AMc: Would you like to see your works attracting people in some kind of pilgrimage – like at Stonehenge – on the winter solstice?

AMc: Can you tell me a little more about the Faou Foundation itself?

MM: The “fa” sign means “force” or “power” and “u” comes from “umu”, which means “giving birth” in Japanese, so “faou” means something like “creative force”. I believe that creativity is one of humankind’s most powerful abilities – something that differentiates us from other species. We would like to emphasise this special ability and use it to protect nature.

AMc: How is the foundation run? How many of you are there and does it have a structure or hierarchy?

MM: We are three girls, including myself. It’s very small, but we have very beautiful and special advisers and board members, both internationally and locally, who help to guide us through the process. So even though we are a small team, we have a great network. We are continuing to develop and welcome people to join us and share the concept of oneness and promote environmental awareness.

AMc: Are all three of you artists in your own right?

MM: No, one of us has a practice in architecture and one of us practises graphic design. But, because we are a small team, we all do everything.

AMc: Is your work with the foundation full-time, or do you still make other work as well?

MM: The Faou Foundation is my passion project. It’s a not-for-profit project that I do on the side. I continue my practice as an artist in a commercial art world, but I believe it is important for artists to contribute to society in a non-profit way as well.

AMc: As well as the unveiling of Ring on 2 August, you will partake as an invited participant of the official torch relay before the Olympic Opening Ceremony on 5 August. What does it mean for you to be part of the cultural programme surrounding an event as spectacular as the Olympic Games?

MM: First of all, I think the Olympic Games are a moment of unification of all the nations and ethnicities. Therefore, it’s absolutely the most effective and precious moment for sharing the concept of oneness and honouring nature. It’s really a privilege to present this work during the Olympics, when the world is becoming one. As for the torch relay, I think it’s a rare opportunity for an artist to be participating, since it’s a sports event, so I am very thrilled and delighted and excited that I’ll be able to hold the ancient, sacred flame, that comes from ancient times, and I’m honoured to become part of the tradition.

Ring: One with Nature will officially premiere on 2 August 2016 at the top of the Véu da Noiva waterfall, located in Muriqui, Mangaratiba, in Rio de Janeiro State. The Ring will remain in the location after the Olympic and Paralympic Games. 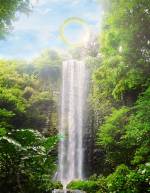 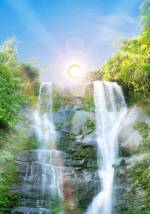 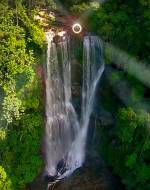 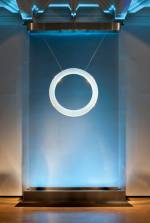