Through site-specific installations, this visually splendid exhibition explores the role of the artist’s studio in contemporary practices 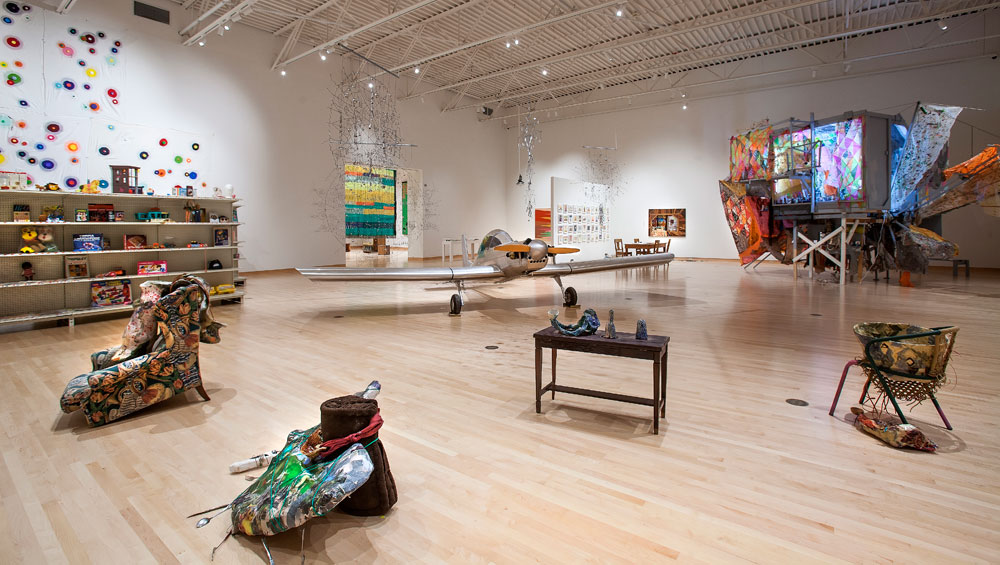 If you have been thinking about artists’ studios of late – always of interest to anyone enthusiastic about art and art-making, or should be – Makeshift is for you. But you will have to hurry to Sheboygan, Wisconsin, before 3 March to catch it. It is a visually splendid exhibition about such spaces, curated by Chicago-based artist/curator Michelle Grabner in collaboration with the John Michael Kohler Arts Center, posing a number of questions about their use and significance today. The most expansive of several exhibitions clustered around the theme of Live/Work at the Arts Center (including Hothouse, featuring Virgil Marti; Made and Connected with works by Garry and Peggy Noland; and Dark Matter, a luminous solo by Los Angeles-based artist Joel Otterson), the seven installations that comprise Makeshift skirt issues about contemporary studios in a nomadic, global art world more and more in thrall to market forces, often favouring technological disciplines, high production rates and the outsourcing of that production. What we are given here is in many ways a continuation of the kind of artists’ studios that have long been the standard for ateliers – that is, a private, often idiosyncratic space for conceptualisation and creation of objects. 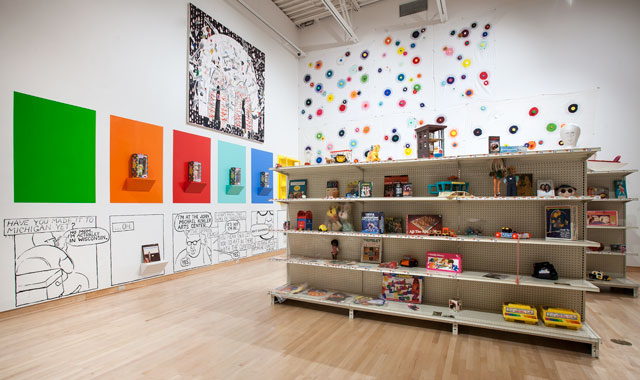 The artist’s studio has been the subject of art over the centuries and has changed in response to changes in art and the world circumnavigating it. From garrets, garages and basements to large industrial spaces of all sizes and conditions, from single occupancy to shared square footage to hives abuzz with assistants to sleek showrooms that rival those of galleries and museums to a computer screen, studios are reflective of current norms.

Presented in the centre’s grandly proportioned central gallery, the installations, visible simultaneously, strike a lively exchange with each other as a kind of (friendly) crossfire. The open-studio arrangement – it has the feel of an enormous communal workspace – and the scope of these particular artists’ practices, are not incidental to the impact of the exhibition. 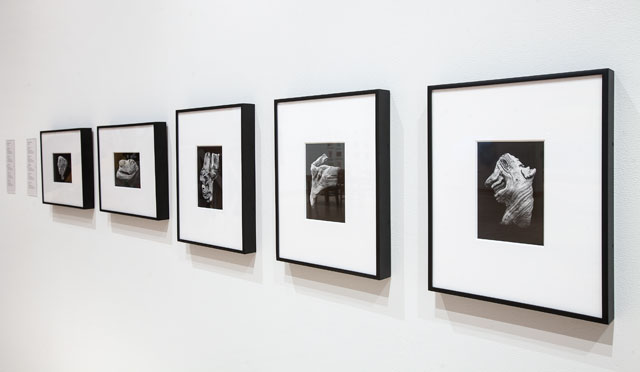 Entering the gallery from one side, there is a provocative sequence of Rossi’s preternaturally clear, exquisitely detailed, intimately sized, grey-scale photographs of what turns out to be driftwood from 2004. However, they are less straightforward than that, and can be read as weathered archaeological artefacts or a series of discomfiting visages belonging to alien creatures. 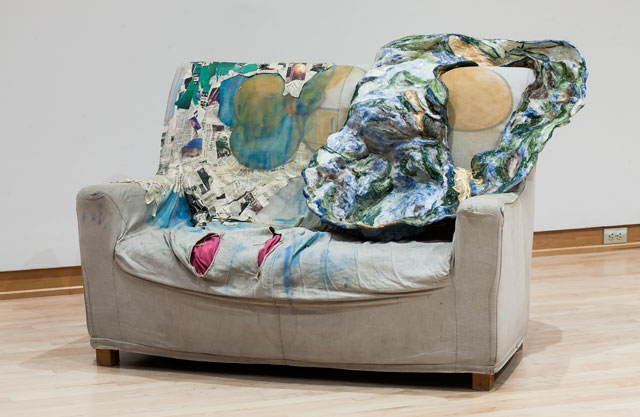 Nearby, seemingly scattered about, are Hutchins’s captivating transformations of commonplace things, such as much-used furniture, domestic objects and clothing. Characteristically, she has made them into something less familiar, playful and curiously appealing, between trompe-l’oeil and the surreal, between the intuitively shaped and the improbably functional, incorporating materials that are not always what they appear to be, mixing ceramic, concrete and papier-mache with fabric. 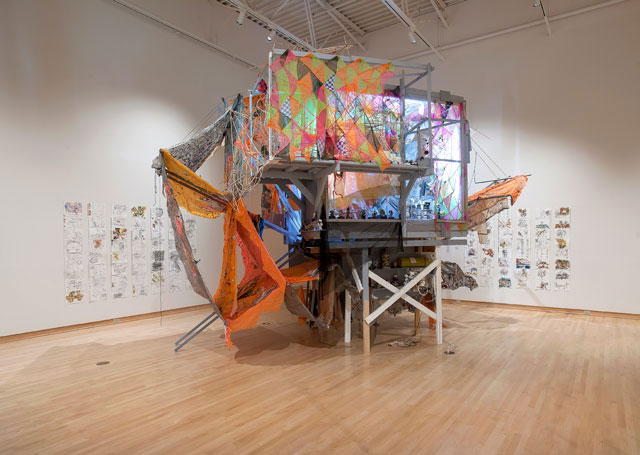 Smith’s contribution is a flamboyantly coloured, eye-snagging construction that has the feel of an elaborate tree house/hideaway that any child might want as the ultimate birthday present and an engrossing wall of drawings. Smith is a painter, videographer and installation artist with a performative bent, and a first-rate DIYer who also has a doctorate in physics from Harvard. 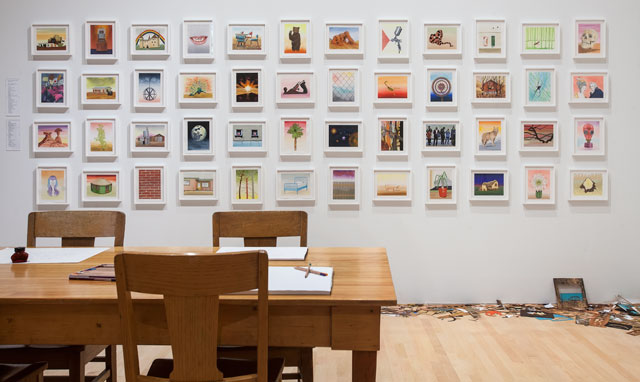 Next to it is Taylor’s installation, which consists of rows and rows of delightful, delicately hued watercolour and gouache paintings across a gamut of subjects to create their own miniaturised world, a table set out for drawing, visitors invited to do so, tools and stencils and other implements and discarded scraps littered along the base of the wall, as if kicked aside, and one of her wondrously, formidably executed marquetry panels, Shed Bed Chainlink Forest Scorpion Sunrise (2018). It was spurred by a “game” she formulated for this project (she said it is not how she usually works), based on six words she randomly dealt herself from the 48 words imaged in the gouaches. 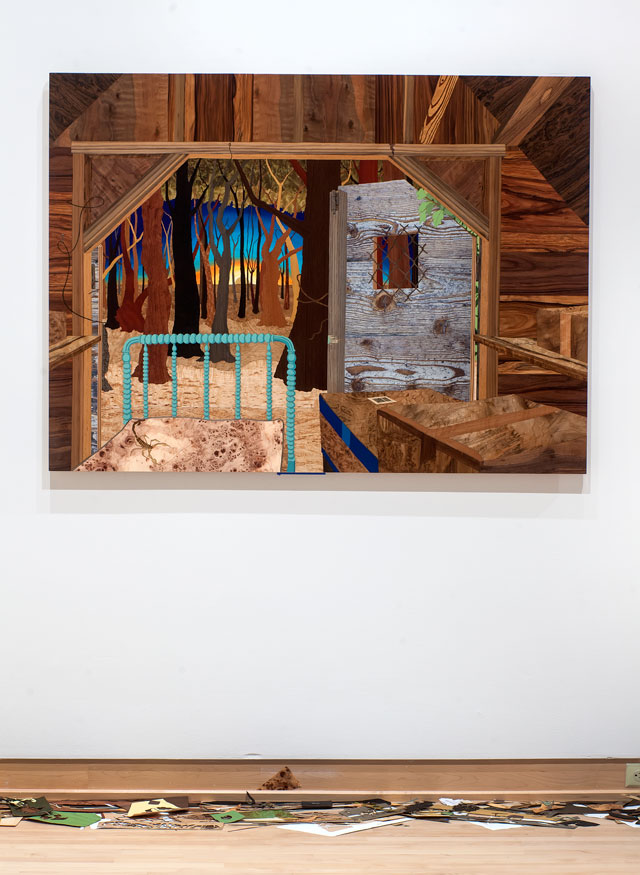 Hancock also takes us through his creative process. His imaginative installation is as abundantly, exuberantly object-filled as his acclaimed, irreverent solo exhibitions, consisting of paintings, cartoon sketches and repurposed found objects, with appearances by characters from his invented Moundverse. In addition, he has added freestanding shelves stocked with toys, games, comic books, saying that, here, he was thinking about memory, about his travels and retracing his steps, which included cataloguing his studio.

Odita’s bold, distinctive, laser-edged abstractions are composed from a rich palette of carefully calibrated colours that are unique. They can be read as both formal and sociopolitical, his hues referential, coded. Accompanying two large paintings is a table with books that have inspired him, revealing some of what concerns him and underpins his paintings. As for execution and process, Odita includes a video called Time Lapse (2018) that fast-tracks a work in progress to its conclusion. 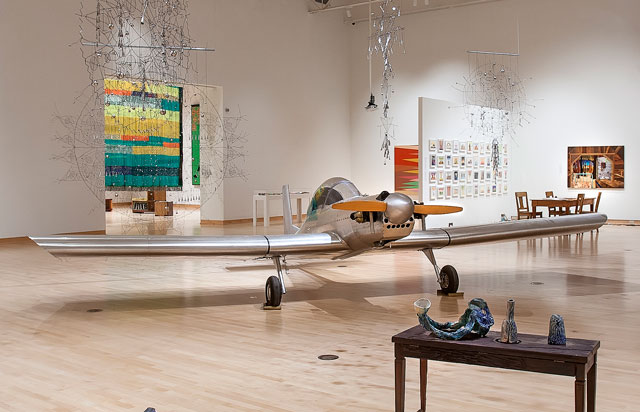 As his contribution, Kahlhamer installed a large aluminium model of an Ultra Cruiser [a light-weight American aircraft that could be assembled by amateurs], built by his father, paired with the artist’s intricate, supersized version of a Native American dream catcher. Each seems based on the idea of a protective charm, of transporting and escape, the warding off of evil by means of craft, magic talismans and ingenuity.

Grabner defined her concept of the studio as a place of ideas and thinking, a place for making and for exhibition. Makeshift, in offering a glimpse of this to the viewer, of the “make” and the “shift”, offers a gift, especially to those who might not usually have an opportunity to visit an artist’s studio and see him or her at work, an activity that is mundane, mysterious and, ultimately, illuminating. 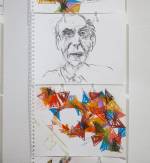 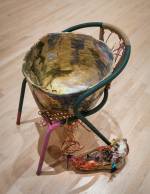