Magdalena Abakanowicz: Every Tangle of Thread and Rope

Magdalena Abakanowicz: Every Tangle of Thread and Rope

This show covers the full span of the Polish artist’s career and the extraordinary sculptures, called Abakans, that she fashioned from organic material, alongside films, archival images and extensive quotations from Abakanowicz herself 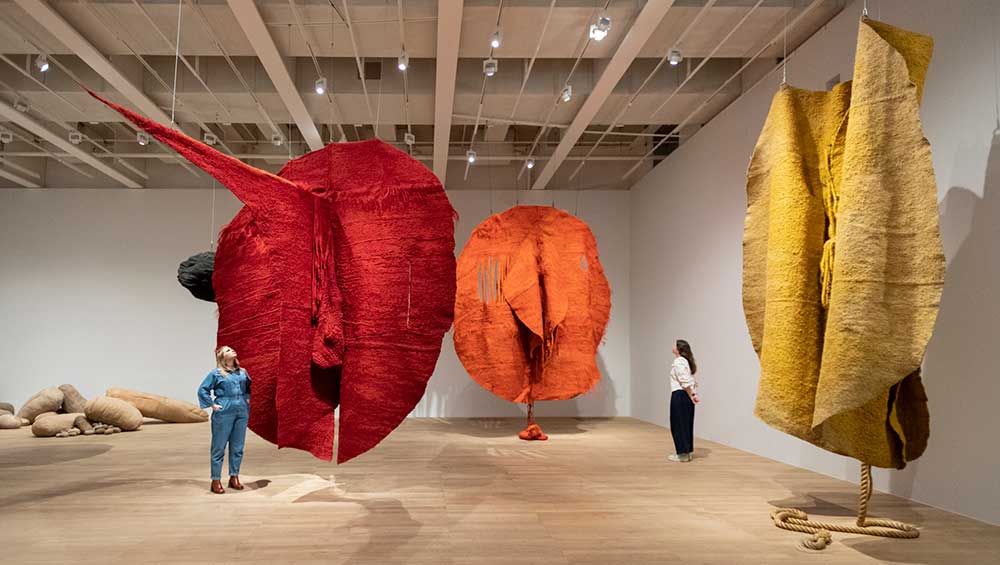 The Polish artist Magdalena Abakanowicz (1930-2017) is famous for her large-scale woven sculptures that became known as Abakans, and that is what this exhibition focuses on. But before we get to these genre-defying works, it is worth considering how she began. After training in painting and weaving, Abakanowicz graduated from the Academy of Plastic Arts in Warsaw in 1954. This was a time when censorship of the arts in Poland was easing and experimentation across media grew. While she was working with painted fabrics and interior design, Abakanowicz’s main interest was to interrogate the creative possibilities of weaving.

From the outset she was interested in organic forms and in early works such as Kompozycja zielona/ Green Composition (1956-57) she used gouache, filling the cotton canvas with birds, butterflies, plants and fish. As part of her commission for the Eighth São Paulo Biennial in Brazil, she made Helena (1964-65), a large-scale wall weaving constructed from wool, cotton, sisal and horsehair.

Moving from two- into three-dimensions, Abakanowicz continued in her experimentation with natural materials. As she explained: “It is from fibre that all living organisms are built, the tissues of plants, leaves and ourselves. Our nerves, our genetic code, the canals of our veins, our muscles. We are fibrous structures.” It is this very visceral understanding of organic materials that gives her sculptures such power. Smaller works, such as Diptère (1967), made of hemp, sisal and horsehair, or Hand (1975), made of sisal, are shown encased and in a mock-up of the artist’s studio alongside drawings and other objects. 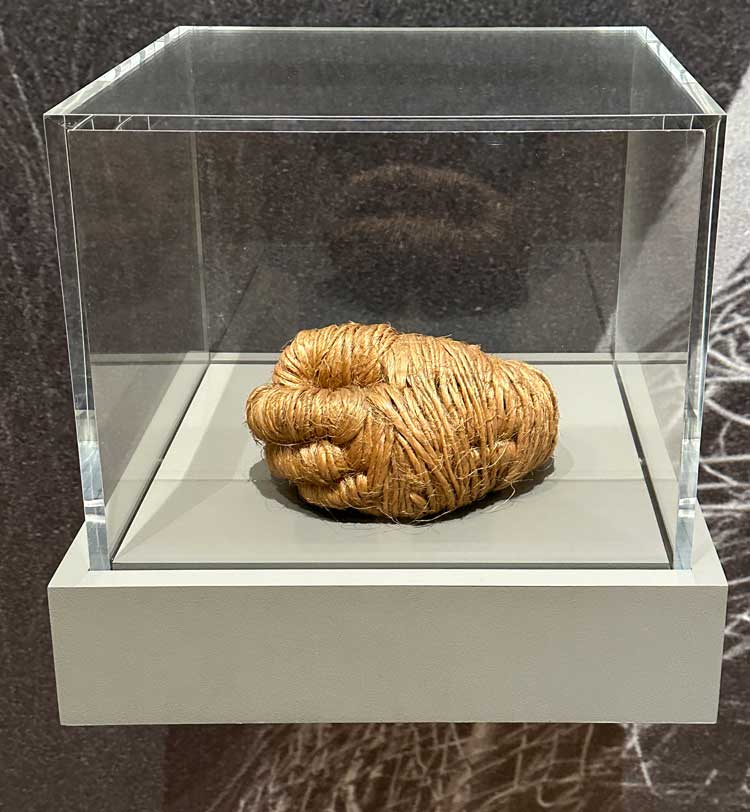 It is when we come to the fibrous forest of the Abakans, free-hanging woven forms in space, that things become really interesting. No longer tapestry or sculpture, these large structures (up to five or six metres tall) hang together in the gallery in relation to each other and the viewer. The facets, folds and crevices of their fabric tumble downwards, their surfaces resembling tree bark or animal fur. In pieces such as Abakan Étroit (1967-68), Abakan Red (1969), Abakan Yellow (1970) or Abakan – Situation Variable II (1971), we see how they cast shadows, or spew hemp rope entrails on to the floor. 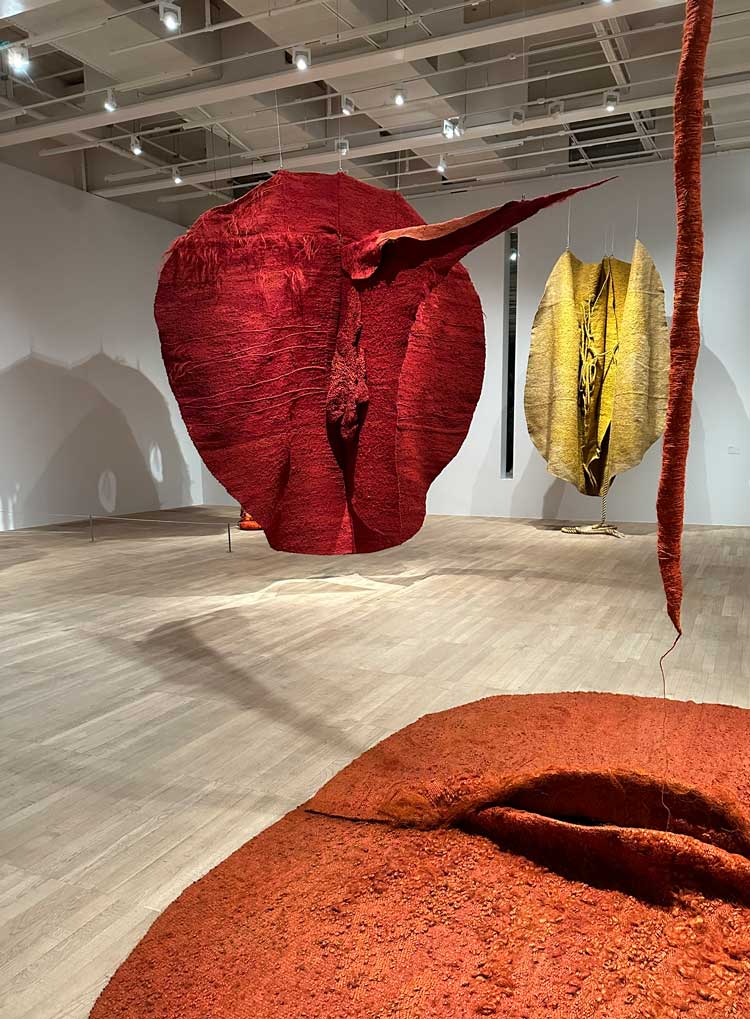 Their presence is bodily, and you can smell the sisal and the horsehair. Despite their dark demeanour, there is a benevolence about the Abakans, a warm sensory experience that suggest they would offer a place of safety, if it were needed. As Abakanowicz said: “The Abakans were a kind of bridge between me and the outside world. I could surround myself with them; I could create an atmosphere in which I somehow felt safe because they were my world.” That sense of safety originates in the Abakans’ kinship with the human body and with the earth around us. They might be thought of as a comforting figure enfolding us, or as an earthy or arboreal hollow. 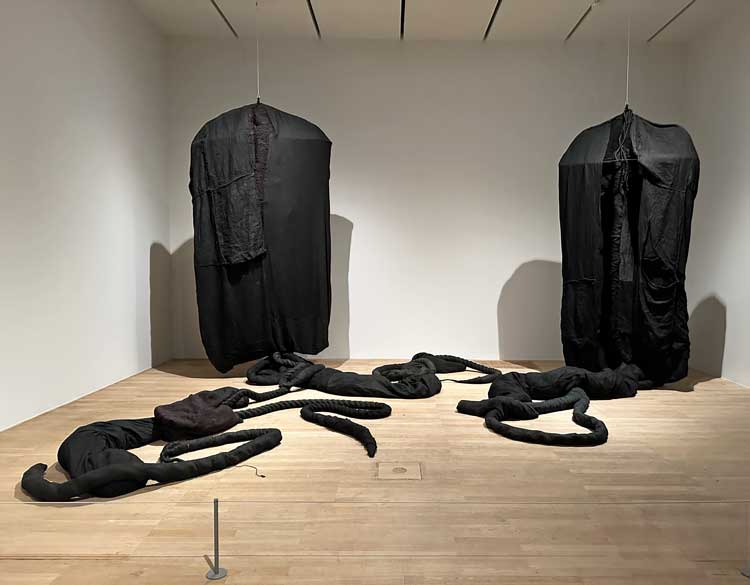 Abakanowicz began grouping her sculptures more closely together in exhibitions to create what she called a total situation. Working with industrially woven cloth and rope she constructed hollow flowing sculptures such as Zespół Czarnych Form Organicznych/Set of Black Organic Forms (1974), more menacing than those we previously encounter in this exhibition. She said: “The rope to me is like a petrified organism, like a muscle devoid of activity. Moving it, changing its position and arrangement, touching it, I can learn its secrets.” How she worked with such materials and achieved what she did is partly revealed in the film Abakany (1969), which the artist made with the avant garde film director Jarosław Brzozowski (1911-69) and experimental composer Bogusław Schäffer (1929-2019). Most of the film is shot on the strange lunar-like landscape of the Baltic coast of Poland, but the indoor scenes show Abakanowicz working in her studio and gallery space. 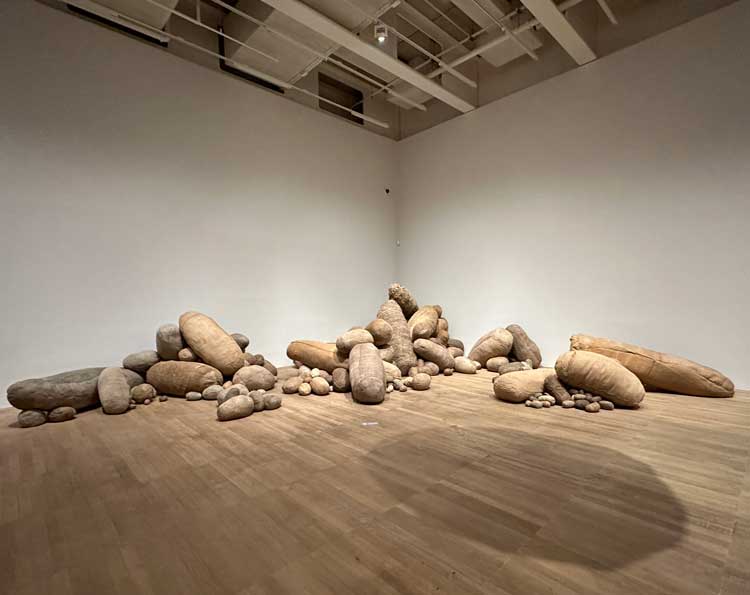 In 1978, Abakanowicz began a new series of work entitled Embryology. Tired of being labelled a fibre-artist, she began to make these abstruse forms by placing fabrics and fibres bundled and bound into plump organic masses. In the Venice Biennale of 1980, she showed 800 of these forms in the Polish national pavilion. Resembling some sort of monstrous embryos, as their name suggests, their soft, throbbing existence must have been quite sight. A smaller group of embryo forms is shown here in this exhibition, strewn in a corner of the gallery resembling eggs in a nest, along with several womb-like hanging pieces. The Embryology drawings shown here are curious, too. Made following the biennale, they also resemble embryonic forms. Working on wet paper and allowing the ink to bleed into the fibres rather like the frayed threads of her woven forms, Abakanowicz made these drawings as independent artworks rather than plans or designs. As the gallery wall text notes, they resemble early pregnancy scans, a poignant observation. 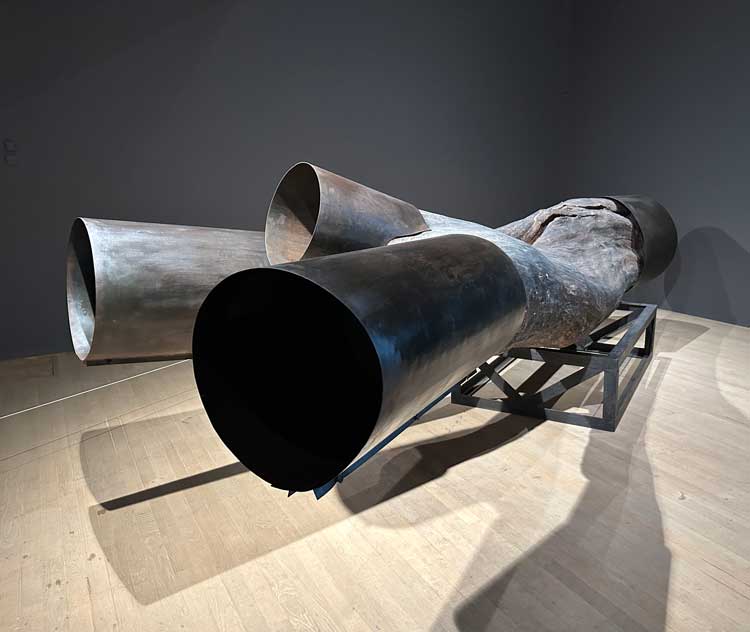 The space of the exhibition is a rich timeline showing the full span of Abakanowicz’s development and includes films, archival images and extensive quotations from the artist. It also includes her work Anasta (1989), made from a felled tree trunk with steel cladding. The artist regarded such structures as symbolic of pain, protest or helplessness. As part of series of works titled War Games, it also gestures to her later examination of humankind’s capacity for violence and destruction. It also shows her unswerving devotion to organic materials and natural forms across her artistic career and environmental concerns. “Arboreals symbolise our concern with nature,” she said, “which, neglected and abused by man, now turns against him with vengeance. They remind us that a tree is our friend: it gives shade and oxygen, bears fruit, shelters birds and animals, and makes climate hospitable to all.” Abakanowicz, then, reconnects us to nature and the organic in the gallery space, reminding us of its importance and asking us to relate to it in different ways. 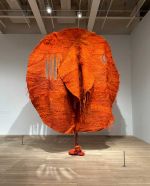 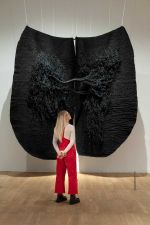