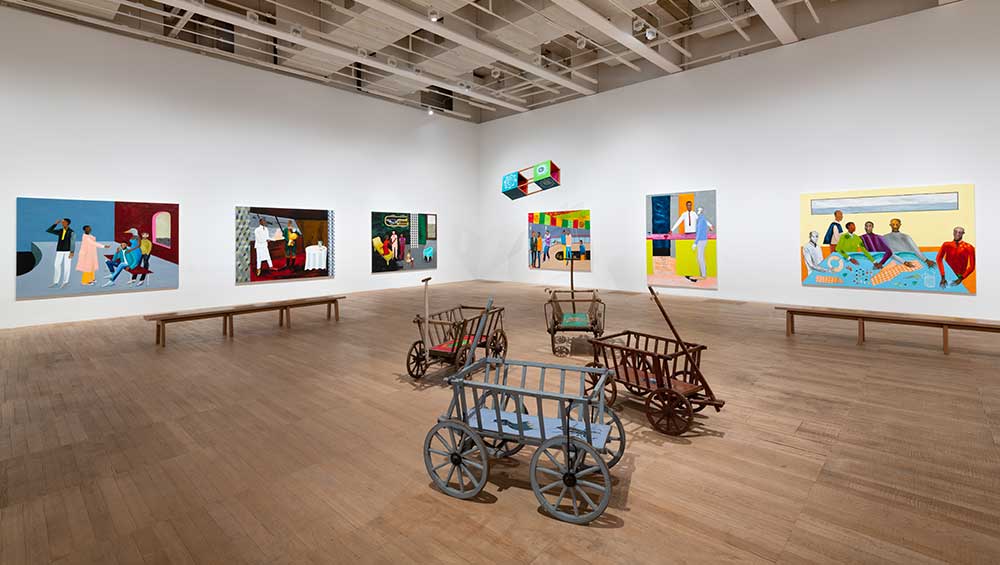 This major exhibition of work by the Turner Prize-winning artist Lubaina Himid (b1954) is a triumph. When a British artist is granted a show at Tate Modern, you tend to expect great things. It is only since winning the Turner Prize in 2017, that Himid has begun to receive the recognition she deserves. So, does Himid’s current exhibition, her largest solo exhibition to date, live up to the accolade? The simple answer is, yes.

Himid has long been interested in theatre sets – she gained a BA in theatre design in 1976 – and this exhibition is full of storytelling and scene-making, but not too full. I appreciated the space to move and think; the work did not overwhelm. Himid says: “I have always thought of my work as starting when people get to see it. For me, nothing starts until then.” This explains the feeling of space and freedom in this exhibition, room for viewers to encounter the work on their own terms, to form their own dialogue with it. From the moment you enter the exhibition, there is sound, sound that seems to gently embrace us. Himid says: “Patterns occur when I am talking to myself and trying to make visual the music, the sound, the noise and the poetry which underpins all of my work.” The soundscapes in this exhibition, produced with Himid’s collaborator Magda Stawarska Beavan, are mesmerising and, for my money, help to create safe spaces to ask difficult questions. Make no mistake, Himid’s work, for all its colourful, joyous appearance, does ask difficult questions and perhaps Stawarska Beavan’s soundscapes make that more bearable. 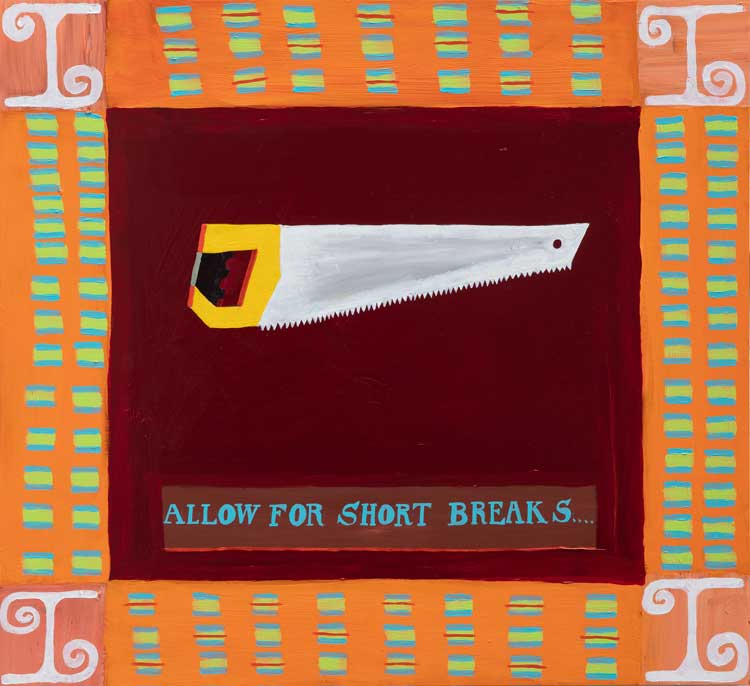 There are questions throughout this exhibition, questions about the built environment, about history, about personal relationships and about how conflict shapes our lives. Himid observes: “The British ruled the world with rules and regulations, and part of the strategy of colonialism is controlling the world via catastrophising – laying on rule after rule and not crediting their subjects with commonsense.” This observation forms the source of many of the questions she poses in this exhibition. Her challenges to rigid architectural structures and a call for more fluid spaces that nurture creativity comes in works such as Three Architects, Close Up – Ideas for Development and the fabulous Metal Handkerchief series, all from 2019. 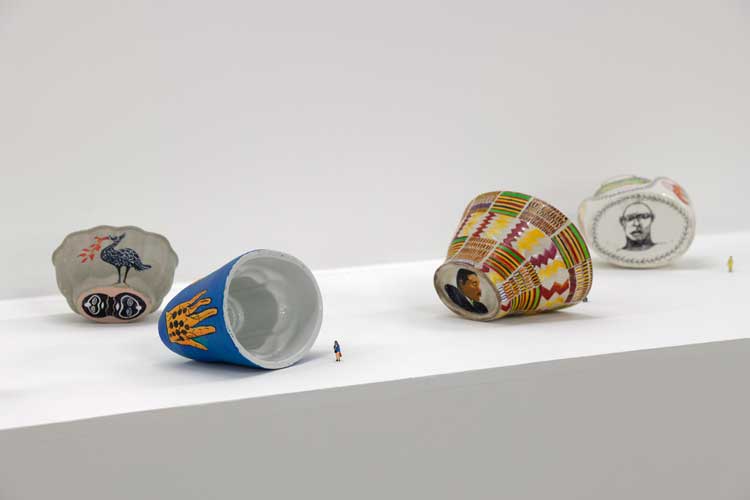 The Metal Handkerchief series plays with health and safety rules to create nine vibrant squares that confront the language and tools of construction. Her question “What are monuments for?” is addressed through her work Jelly Mould Pavilions for Liverpool. These imagined monuments commemorate the contribution of people of the African diaspora to the city of Liverpool, its wealth, history and culture. 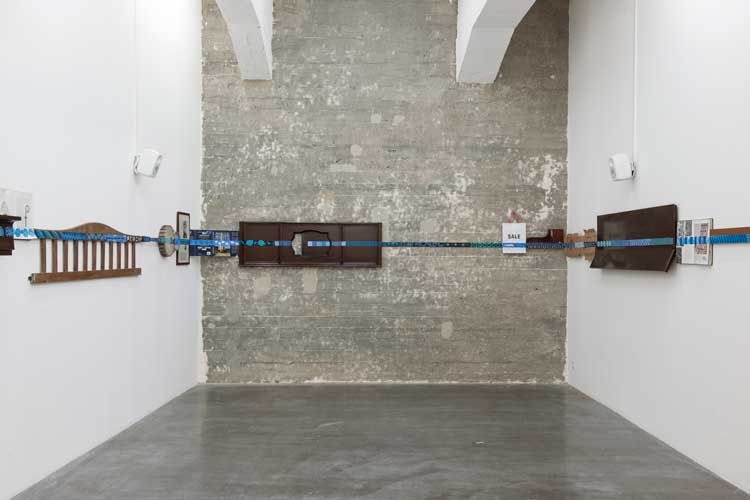 What does love sound like? This question, and this part of the exhibition, is the one I experienced most deeply. Blue Grid Test (2020), making its UK debut, is transfixing and stopped me in my tracks. The 25-metre-long painting includes 64 patterns from around the world. Each pattern is painted a different shade of blue, referencing Joni Mitchell’s song Blue. Ultramarine, cobalt, midnight, Oxford, cerulean, lapis lazuli, indigo, sapphire, Cambridge, royal, sky, Prussian, Egyptian, these are just some shades of blue. The blue patterns are painted on top of a series of objects in sequence around the gallery walls – a clock, parts of wooden furniture, a newspaper article, a musical instrument, and so on. One of those objects is a book containing an advertisement for David Whitehead fabric and the jarring strapline: “Fresh gaiety at little cost.” 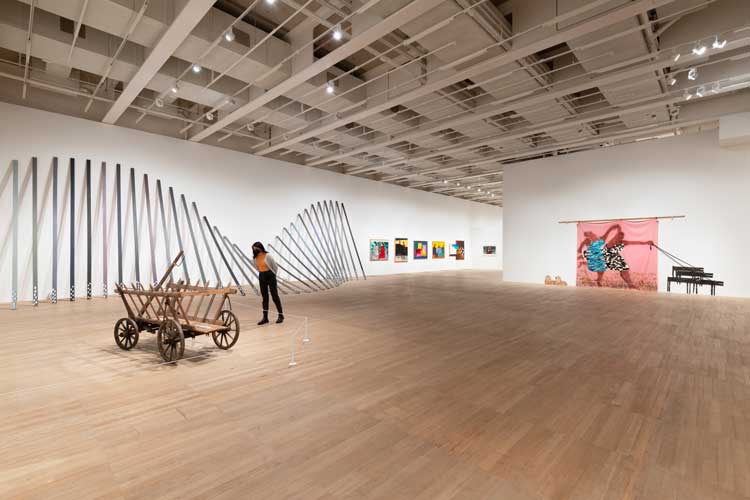 In response to the question, “How do you distinguish safety from danger?”, Himid shows several works that feature the precarious buildings at the edge where land and sea meet – Metal/Paper, Beach House (1995) and Garfoni (1995), for instance.  Most compelling is Old Boat/New Money (2019), a series of wooden planks propped against the wall in a wave-like formation with the accompanying sound of the waves lapping on the shore. The planks form a definite sweep and, in that sense, are secure in their formation. Yet, there is a sense of precariousness, as if they might collapse and fall out of line at any moment. 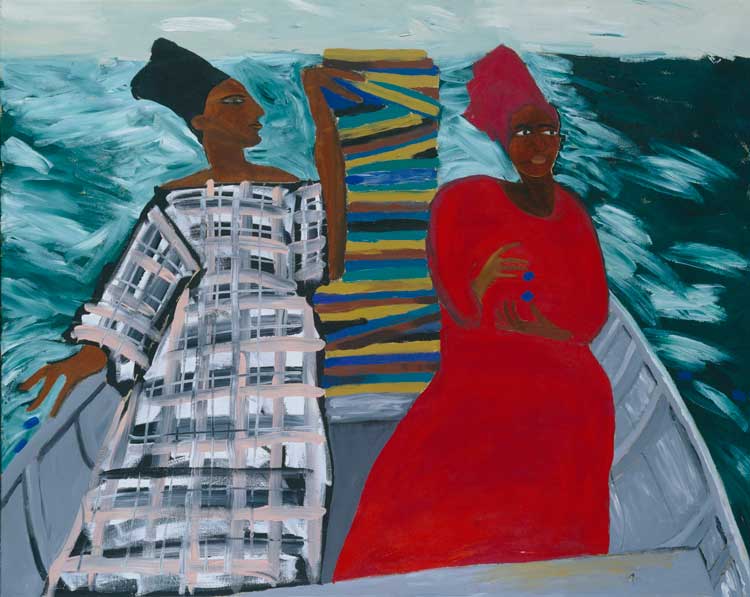 In paintings such as the well-known Between the Two My Heart Is Balanced (1991), Himid asks: “What is this strategy?” There are no definitive answers as things are left open for the viewer to engage with the debate. Still, she suggests: “They have several strategies, they expand to fit the situation. The women take revenge; their revenge is that they are still artists, that their creativity is still political and committed to change, to change for the good.” 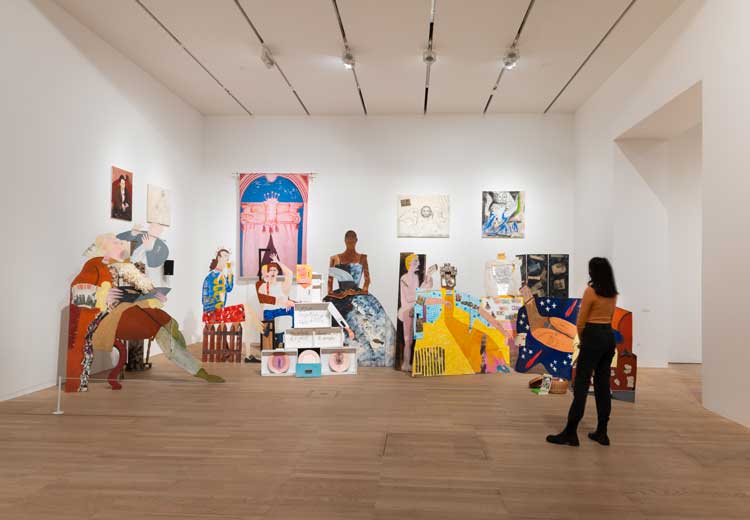 Himid is known for her wooden painted cut-out figures, especially A Fashionable Marriage, first shown in 1986 and responding to William Hogarth’s Marriage-A-la-Mode: The Toilette. An exhibition this size of Himid’s work without A Fashionable Marriage would be unthinkable, but she does things differently this time, recasting the space in front of the gallery lift as a backstage area, a sneak preview behind the scenes. 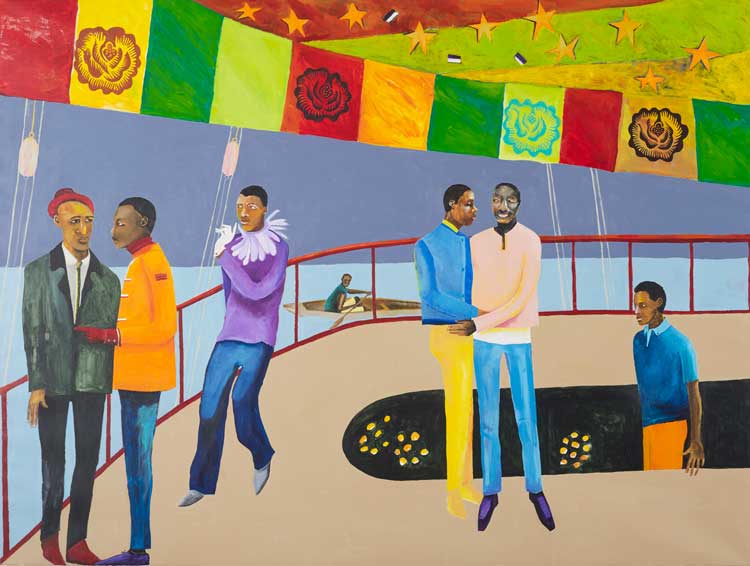 What happens next? Well, this is Himid’s final question, and her response comes in many forms. A series of paintings, Le Rodeur (2016-17), deals with figures in abstruse interactions. The series is named after a French slave ship and the paintings included here present the viewer with uncomfortable truths, making reference to the history of the slave trade. The exhibition finishes as it began, with a phenomenal soundscape. Naming the Money (2005), remixed by Stawarska Beavan in 2017 plays in the final gallery space, giving voice to the enslaved Africans of 18th-century Europe who were forced to change their identities. This is accompanied by a new installation Do You Want an Easy Life? (2021). Bringing these two works together is intended to prompt visitors to investigate their own actions and identities, in the exhibition space and beyond. It certainly prompts reflection. 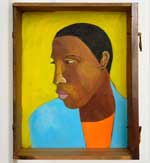 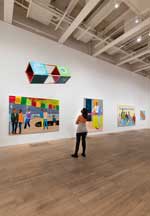