Lorenzo Lotto was a painter of emotions as well as likenesses. With every portrait, he reached beyond convention to get to the heart of his sitters 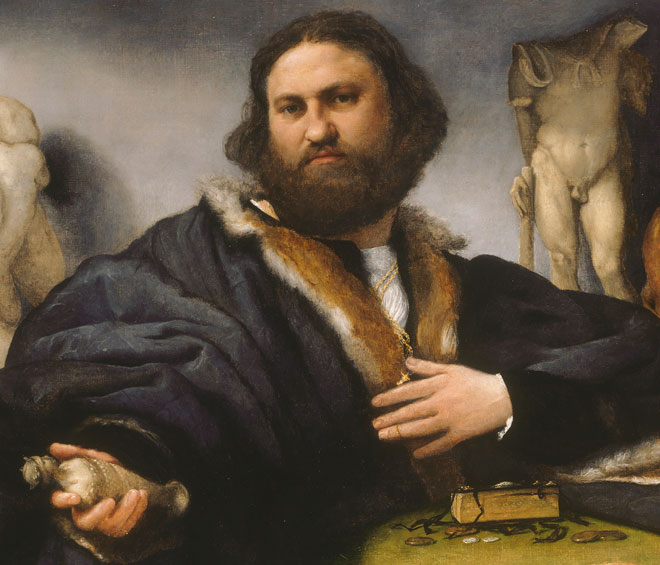 I like Lorenzo Lotto (1480–1556/7); I like the idea of him. Yes, he has been described as an irascible sort – he was always falling out with patrons, landlords and family members – but he painted one of the most powerful portraits of a woman, unmatched in strength until Artemisia Gentileschi picked up her brushes 100 years later. The painting I refer to is of a noblewoman, whose identity is still a mystery. What is sure is that she is inviting comparisons to Lucretia, that tragic heroine of ancient Rome who reportedly killed herself after she was raped, unable to live with the shame of her defilement.

It is a difficult story to swallow now but, in the Renaissance world, Lucretia was held up as the pinnacle of wifely virtue, a figure to aspire to. But while Lotto’s sitter points to a print of the woman that may have been her namesake, she is every bit the solid, defiant individual. She is not buttoned up and meek; in fact, she stares at us directly, challengingly. She is married – she wears a wedding band and matrimonial chains (stuffed into her bodice) – but her husband is conspicuous in his absence from the empty chair at her side. 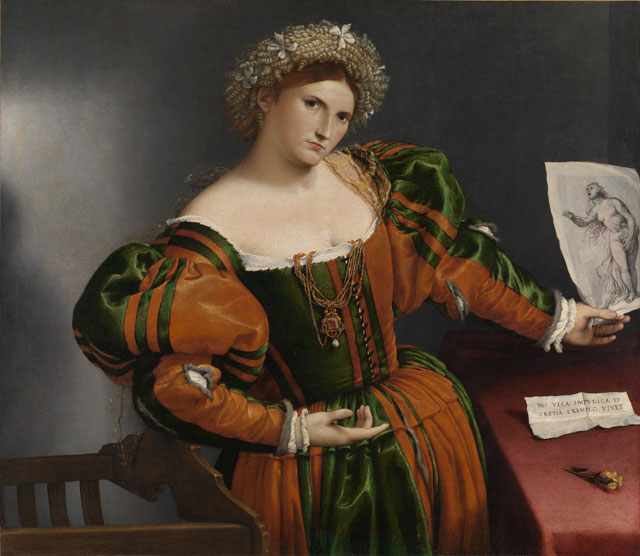 Lotto was a master at representing people as they wanted to be seen, their fine clothing and accoutrements exquisitely rendered in meticulous detail (his early work adopts the tight precision of the German tradition). But he also painted his sitters as he saw them and the psychological depth of his portraits is arresting. Take, for example, his Portrait of a Man (c1535), an individual dressed head to toe in black. He has a soft face, gently inclined to one side and dark bags under his eyes, which are watery and bloodshot. Between his eyebrows, a furrow has formed where he has been frowning. He places his right hand on a pile of broken flowers, which act as a bed for a tiny skull, a prescient reminder of death and the fragility of life. It is clear that this man is in mourning, and rather than flatter the stricken sitter, Lotto imbues his likeness with gentle empathy. 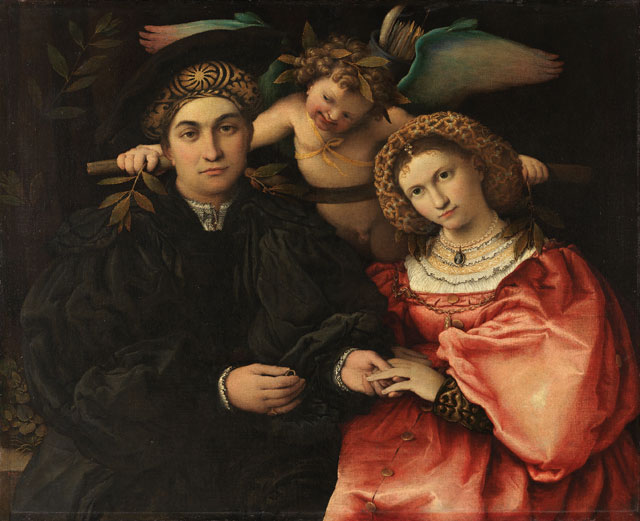 But he had a sense of humour, too, and once you start looking for it, you see it in so many of his canvases. Marsilio Cassotti and his Wife Faustina (1523) is a marriage portrait celebrating the couple’s wedding. The young man is a wealthy merchant, but he is marrying into the aristocracy, and while his wife looks out of the picture, her face every bit the sincere bride, her new husband wears the wry, smug smile of a man whose fortunes are on the up. A cupid hovers behind them, literally yoking them together with a length of branch, and as he does so, he peers down, into the young man’s face with a perhaps critical smile and a knowingly raised eyebrow. 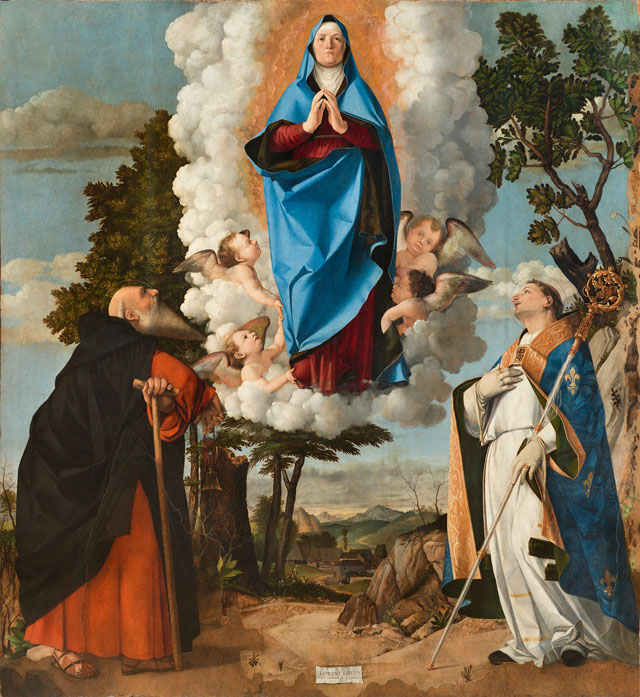 Cupids, putti and angels get up to all sorts of mischief in Lotto’s paintings. They draw our attention to the subtext, reminding us of the artifice, of the real world that undermines pretentions to the ideal. It has been suggested that the model for his The Virgin in Glory with Saints Anthony Abbot and Louis of Toulouse (1506) was (remarkably) the middle-aged Caterina Cornaro, the deposed queen of Cyprus, who was given domain over a small region outside Venice, where she surrounded herself with poets and artists. Here she is, tight-lipped with a double chin, the angels, curator Matthias Wivel suggests, struggling to hold her aloft above the landscape. 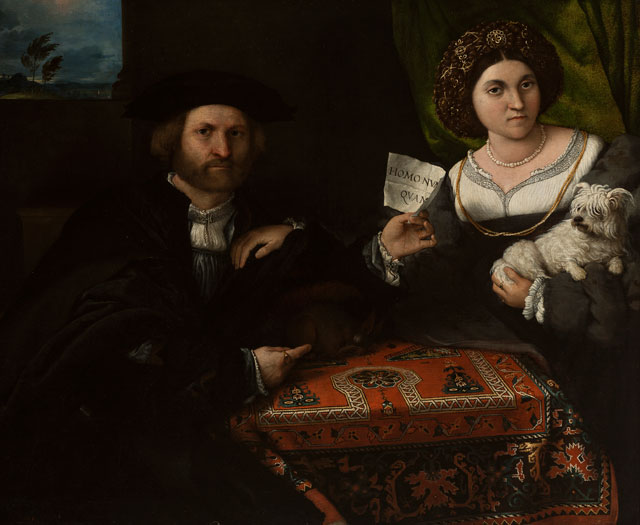 Despite Lotto’s successes, he found it difficult to compete with his contemporaries. He spent a lucrative decade in Bergamo, but struggled to gain traction in Italy’s artistic centres. In Rome, Michelangelo and Raphael were at their zenith, and by the time he returned to his home city of Venice, the younger Titian was snapping up the most prestigious commissions. So, Lotto led a peripatetic life, finding work where he could, becoming, towards the end of his life, increasingly disillusioned until he sank into a very real depression, diagnosable by the diary-like entries he made in his accounts book and the copies of his will, in which he laments his misfortunes.

During this time, Lotto’s portraits change markedly. His use of colour becomes more sombre (he couldn’t afford the colourful pigments of his earlier career), and the curators are sure that he painted miserable-looking people because he felt that way himself. But as his finances suffered, he became ever more sympathetic towards people who were also down on their luck. Remarkably for the time, he inserted portraits of ordinary, penniless people in his altarpieces and paid them for their time. 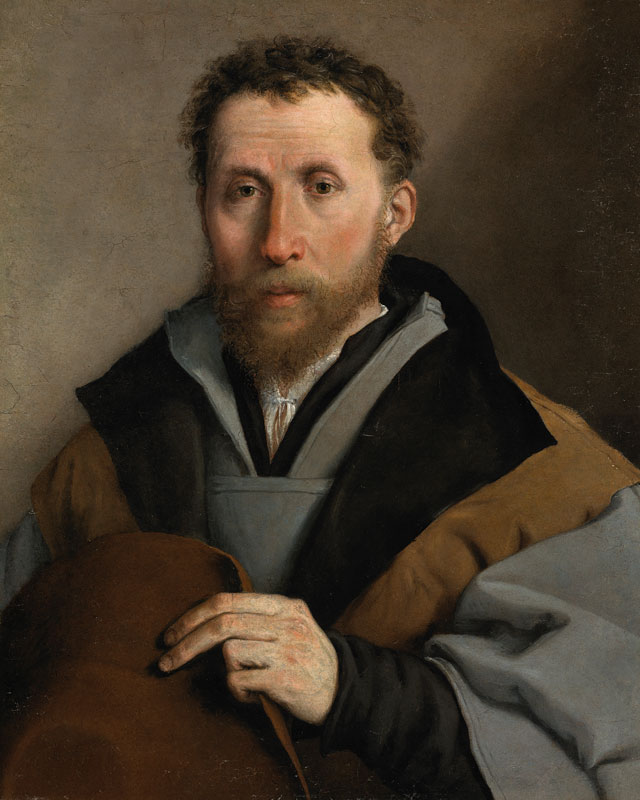 That he was drawn to painting those of modest means is also illustrated in a little portrait of an unknown man holding a felt hat (c1541). He is smartly dressed, but not in the rich garments of a nobleman. His outfit is fine, but humble, his beard and hair are dishevelled, as though he has just removed his hat and come in from the cold. He looks, in fact, a little unsure of himself. He is not someone who is used to posing for portraits. It is such a quiet, charming image, in which the translucency of the sitter’s skin – the blue veins in his hands, the flush of his cheeks – make him all the more human, and all the more vulnerable for it.

Lotto also saw frailty in the powerful, especially towards the end of his own life. Portrait of an Elderly Gentleman With Gloves (1542–4) is thought to be the likeness of Liberale da Pinedel, who was known to be a cruel and unforgiving man. But in Lotto’s eyes he is elderly and frail, grasping a handkerchief to his side so tightly as to make him seem on the verge of some emotional catastrophe.

Lotto died in Loreto as part of the congregation of the Basilica della Santa Casa, unable to support himself as a painter any longer. He had tried, throughout his career, to adapt his work, loosening his tight, layered style, and taking on some of the influences of Raphael, with whom he had worked briefly. Despite his efforts, he ended his life in obscurity and earned little more than a footnote in Giorgio Vasari’s treatise on the great artists of the Renaissance. But he is celebrated here with affection in an exhibition rich in excellent examples of his work.