Technology and Art 10: LINGUISTICS AND TOYS AT THE ICA

LINGUISTICS AND TOYS AT THE ICA
Technology and art 10

"Increasing numbers of mathematicians and of engineers have joined them [poets, philologists and philosophers], attracted by technical problems, formerly ignored or considered trivial... Play Orbit...`toys, games and playables by people who are not professionally involved with the design of playthings, but who work in the field of the visual arts'"

'What is the definition of linguistics?' asks Mandelbrot. 'The answer to this question has lately lost the clarity which it seemed once to enjoy. The poet, the philologist, the philosopher, and their traditional associates have ceased to be the only ones concerned with the structure of human discourse. Increasing numbers of mathematicians and of engineers have joined them, attracted by technical problems, formerly ignored or considered trivial, suddenly become so important that they elude traditional barriers between fields, even those which merely contained intellectual curiosity.'1

To Mandelbrot's list of interested parties one might add the psychologist, the neurologist and the anthropologist. The current series of linguistics lectures at the ICA, organized by Jasia Reichardt and Noel Minnis, is booked solid. The lectures continue weekly till the end of February, with a break for Christmas, and will eventually be published.

It is encouraging to see the ICA returning to mainstream activities, when some recent shows such as 'Homage to Apollinaire'—reminiscent of a reunion of old stagers —suggested that it was trying to please too many people at once and lacked the confidence to think through the success of 'Cybernetic Serendipity' towards a new policy. The recent appointment of Jonathan Miller to the council is also encouraging. Dr Miller is reported in the Sunday Times as wishing to 'bring the arts and the sciences into one arena', and is planning an exhibition that will 'examine Man's view of the world, conditioned as it is by his own physical and psychological structure'.

Of the four linguistics lectures delivered so far (at the time of writing)—by Professors Robins, Henderson, Lyons and Ullmann — all have been suitably authoritative expositions of the fundamentals of the science, including phonology, grammar and semantics. None has yet speculated very deeply why linguistics is now such a popular, indeed glamorous, subject; and I wonder whether linguists as a group are not a little dazzled at their sudden exposure to public excitement after frequenting for so long the dustier corners of libraries.

The personal reputation of Noam Chomsky has cast considerable lustre on linguistics, partly because he has argued outwards from his linguistic theories towards an assertion of human freedom and the necessity of self-expression. Chomsky writes, controversially, of 'innate structures of mind that permit us to act as free and creative human beings, undetermined, even probabilistically, by stimulus conditions, yet at the same time functioning within a certain system of rules and principles that are in part a product of intelligence, and in part a fixed and immutable framework within which such products of intelligence are constructed'.2 Chomsky's humanistic approach has been widely welcomed, in reaction against the dismal reductivism of behaviourist psychology.

By the time this article appears, George Steiner will have delivered his lecture on Linguistics and Literature (9 December), and he may be expected to explore some of the wider implications of linguistics. Dr Steiner has recently given notice that he is preparing a paper which will challenge Chomsky's theory of a 'universal grammar' common to all languages. Those who enjoy intellectual controversy will look forward to the debate.

Steiner maintains that 'Natural and evolutionary mechanisms are, in general, economic. The great variety of fauna and flora is by no means inefficient; it represents a naturally selected, maximalized efficiency of adjustment to local need and ecology. We cannot say the same of the world's profusion of mutually incomprehensible tongues.... No information theory, no model of the growth of human consciousness, will be convincing until it accounts for the profoundly startling, "anti-economic" multiplicity of languages spoken on this crowded planet'.3

But surely biological phenomena such as mimicry — whereby, for instance, spiders and bugs imitate the appearance of different species of ant — may be taken as illustrative of the prodigality of nature as much as of her parsimony? Dr Steiner is making an assumption here about biology which I believe to be justified (for nature's parsimony and her richness are closely related). But I cannot see why a similar assumption cannot be made about language. The rich multiplicity of languages is of course inefficient if we regard communication as the only function of language. But of course language has other possible functions as well, one of which can be to encrypt messages so that they are unintelligible outside a given community, for purposes of security or mystification or other advantage. Examples of this are English seventeenth-century legal script or the vocabulary of many modern art critics.

I feel that if the ICA is to mean anything it must be prepared to espouse the unorthodox. I don't mean to disparage the linguistics lectures in saying that they might just as fittingly have been heard in London University as at the ICA. Why not conclude the series at the end of February with a few fireworks? Mr Gordon Hyde, for instance, could be invited to expound his theories linking linguistics with cybernetics and computing. Hyde believes that much study of the languages we use is misdirected, since these languages are not the highest level of linguisticization in the evolution of the nervous system, but the final stage of evolution of the peripheral input/output function. At the highest level — and Hyde's thinking accords here with Chomsky's 'universal grammar'—there must exist a process of 'infinite connectivity', a 'higher internal language that lies behind the natural human output language'. Mr Hyde has planned new computing systems based on a linguistic model (information describing) rather than an arithmetical model (numerical processing). Running at the ICA concurrently with the linguistics lectures is the exhibition Play Orbit, open till 15 February, organized by Jasia Reichardt and Peter Jones.' This shows 'toys, games and playables by people who are not professionally involved with the design of playthings, but who work in the field of the visual arts'.

Toys need not, of course, be trifling, any more than art need be solemn. Play Orbit is distinguished by a rather unusual humility on the part of the artists contributing. Miss Reichardt's introduction to the catalogue4 says that 'many artists who initially agreed to participate in the project later decided that, for one reason or another, they could not make a toy, often stating frankly that their ideas were not good enough'. Children do inspire humility. The least attractive toys in Play Orbit are those which try and impose some interpretation on what the child experiences —like David Petersen's 'pink gorilla and armless ape', a pair of monsters which (the artist writes) he makes because 'perhaps' they `reflect society'. This is wrong.

Some of the simplest toys are the most successful — such as Simon Nicholson's 'magic blower' and Liliane Lijn's 'water column'. Like the kaleidoscope, the top, and many other traditional toys, they exploit a very simple physical effect. The general standard of the exhibition is not very high, but apparently no exhibit was turned down, as a matter of principle. I would have liked to see a rather wider consideration of toys as a major consumer industry, or toys as a factor in education. But the catalogue contains some interesting essays, especially an extract from Johan Huizinga's Homo Ludens, which gives full weight to the significance of play as a cultural phenomenon: 'The ritual act has all the formal and essential characteristics of play ..., particularly in so far as it transports the participants to another world.'

A notable omission from the catalogue is any reference to the work of Iona and Peter Opie on the lore and language of schoolchildren, and more recently on children's games. The Opies work by interviewing children in the street. Their findings could have been tied in with the linguistics lectures, since the evolution of syntax and vocabulary in children is crucial to our understanding of language. It would have been interesting, too, to compare the games that are actually transmitted from generation to generation in street and playground (as observed by the Opies) with the activities of play and ritual discussed by theoreticians like Huizinga.

The Opies have discovered that part of the process of growing-up may often be a loss of recollection of children's games and lore. This may happen over as short a period as one year, at the time of puberty. So Miss Reichardt is right to say that only children can be adequate judges of toys. She says that Play Orbit 'is more significant and interesting as a sociological phenomenon than a homogeneous aesthetic one'; and by these criteria it is a success.

Apart from Mike Chilton's 'lantern for out-doors'—not seen to best advantage in a lighted interior—the electronic exhibits were disappointing, and too many seem technically unreliable. One knows that such exhibits are exposed to a great deal of wear and tear from visitors, and one knows that often it is expensive to build high reliability in. However, the problem must be looked into, for an exhibition of kinetic or electronic devices which don't work is about as interesting as an athletic contest where the athletes have broken legs. The E.A.T. paper Techne contains statistical information on the performance of 75 pieces (electronic, electromechanical or mechanical) at a New York exhibition a year ago.5 37 pieces were operative for 100 per cent of the time, 12 for 90-99 per cent of the time, and the remainder for a smaller percentage. At any given time, an average of 13 pieces were out of order. Five pieces were broken by the public and not repaired.

E.A.T. suggest that specially trained engineers are needed to ensure efficient running of such exhibitions. Where I strongly disagree with E.A.T. is their statement that 'if aesthetic values are assigned to reliability, then some of the best works could never be shown to the public.' 100 per cent reliability is a logical impossibility. However, aesthetic values are quite rightly assigned to good engineering, whereby reliability is brought to a reasonable level in a given operating context. (If the operating context requires that a button be pressed once a minute by small, sticky fingers, then this must be taken into account at the design stage.)

So things seem to be on the move at the ICA. It would be silly to expect this institution, housed in the Mall, and staffed by liveried bar-men, to be a genuine seat of avant-garde activity any more. This is worth saying, for it is a characteristic tactic of the English establishment to tame really radical movements by a process of absorption. But Jonathan Miller's concept of an 'arena' (quoted at the start of this article) seems a good one because it suggests a programme of dynamic encounters, as opposed to a cultural slopbasin.

Peter Hutchinson exhibited at the Museum of Modern Art, New York, during October and November, a documentary exhibition of oceanographic art projects executed off the coast of Tobago, West Indies. The sponsor was John Gibson Commissions Inc., 27 East 67th St, New York. One of Hutchinson's pieces, Threaded Calabash, is shown in the illustration. Set in five fathoms of water, it is composed of rope and five calabash fruits on a coral reef base. Another work by the same artist uses decomposing carbohydrates in plastic bags. 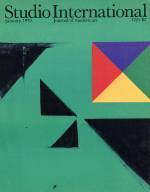 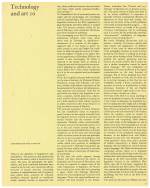 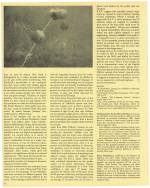