The exhibition nth nature, a new body of work by Lilah Fowler, explores feelings of transience and dissociation in response to increasingly pervasive networks of global transport and communication 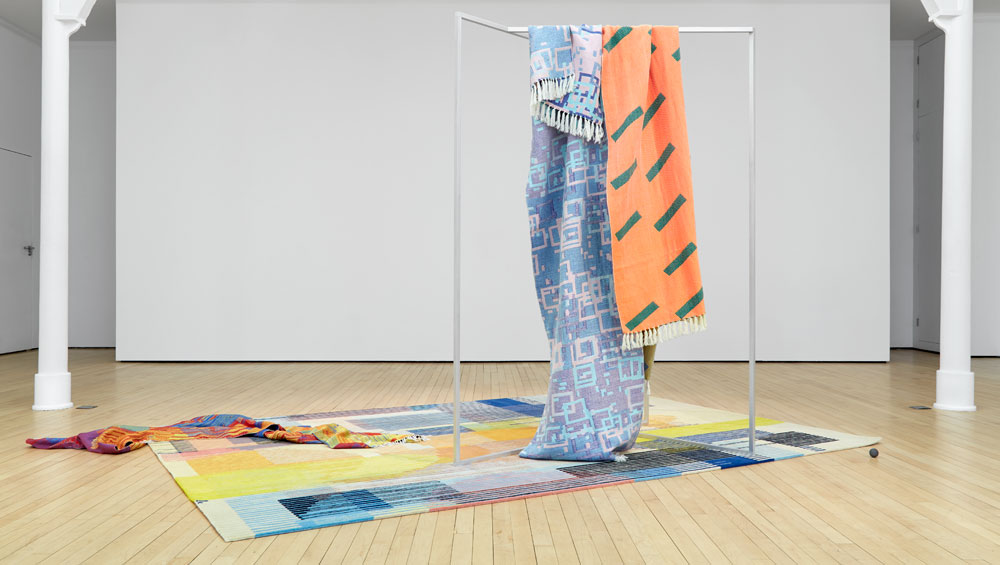 “A plane overhead breaks the quiet loneliness. Then another,” writes Oliver Basciano, describing Lilah Fowler’s experience of an artist residency in the remote Nevada desert.1 No one else around, failing phone signal, little to no access to social media, but still – as air traffic control tracked the planes above – the global transport and communications network remained a constant presence. 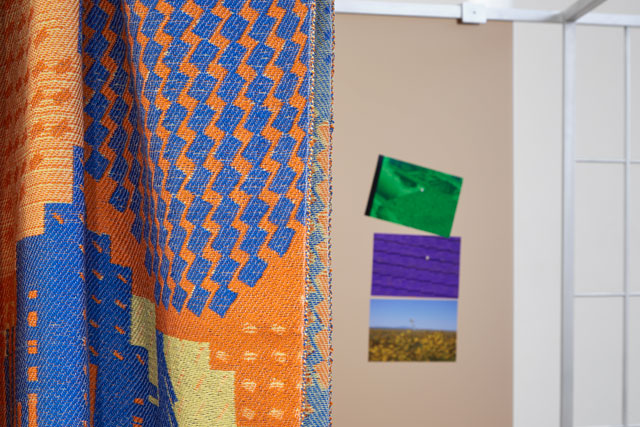 Fowler’s current show at Assembly Point seeks to explore how globalisation and digital technology structure the landscape, challenging romanticised ideas of secluded natural wilderness. For Fowler, nth nature describes a network of potentially infinitely connected geographies, infinitely layered natures. With sculpture, weaving, photography, video and sound work, stones, plant clippings and other materials produced and collected over a number of years and various research projects, spanning the south-west US, the Lake District in the UK and also Hong Kong, the sprawling exhibition forms a vibrant and varied ecology. 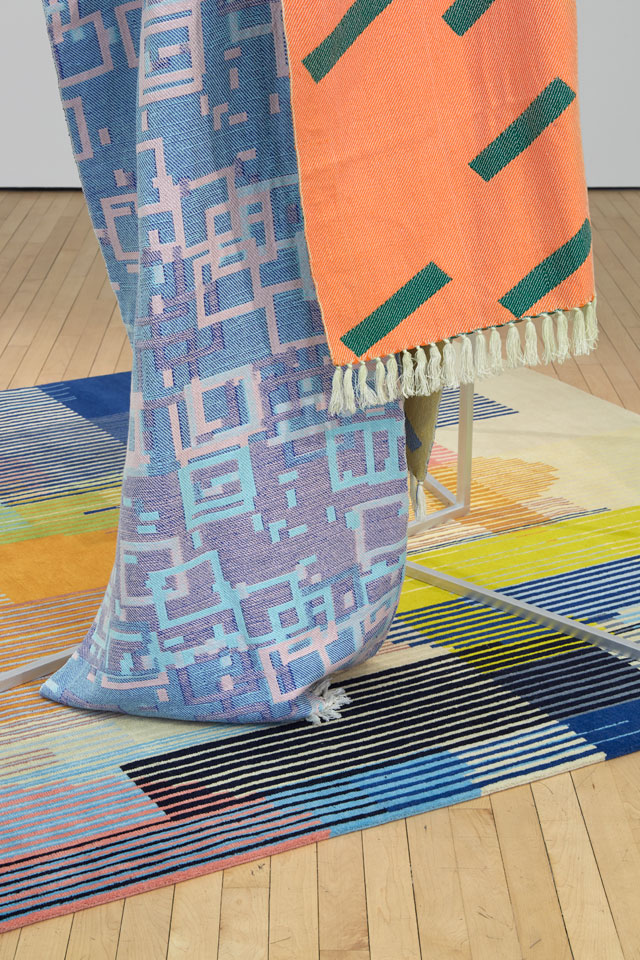 The display is organised around a pair of three-dimensional, broadly triangular, head-high aluminium frames, held together by an irregular network of trusses that resemble something like a 3D road map. Two rugs sit under and beside the “Systems”, as Fowler calls them, and long scarves lie draped over the supporting beams. The vivid colouring and bold geometric design of the fabrics draw influence from Navajo weaving, which Fowler researched and learned to do while in the US. Yet, they were made on a digital loom and their patterns generated by a custom-built computer program, previously used by the artist for an architectural commission installed in Bristol. While the design and production of these textiles are deeply rooted in south-west US, they seem at once connected to a much wider locale through the global tourist market for Navajo weaving and a digital network that extends across America and the rest of the world. 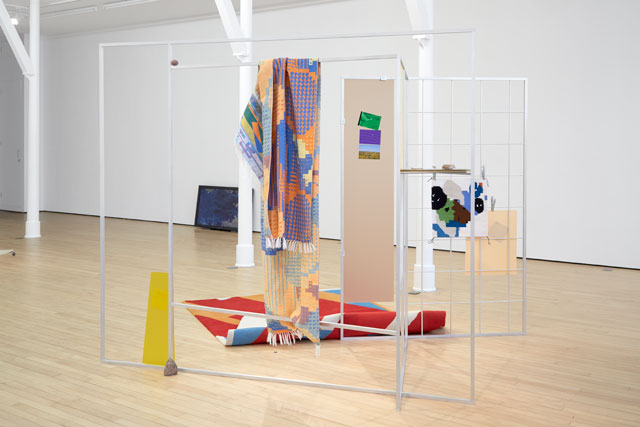 The installation forms connections between a vast network of spaces, but situates itself in no one place; you feel everywhere and yet nowhere, calling to mind what the French anthropologist Marc Augé has called non-places: “spaces of circulation, consumption and communication” produced by increasingly pervasive international free trade, transport and digital communication.2 Non-places are go-betweens that link the local and global: hotels, supermarkets, motorway service stations, airports, the internet; fundamentally, spaces not just of physical and digital transience but of psychological transience, too. 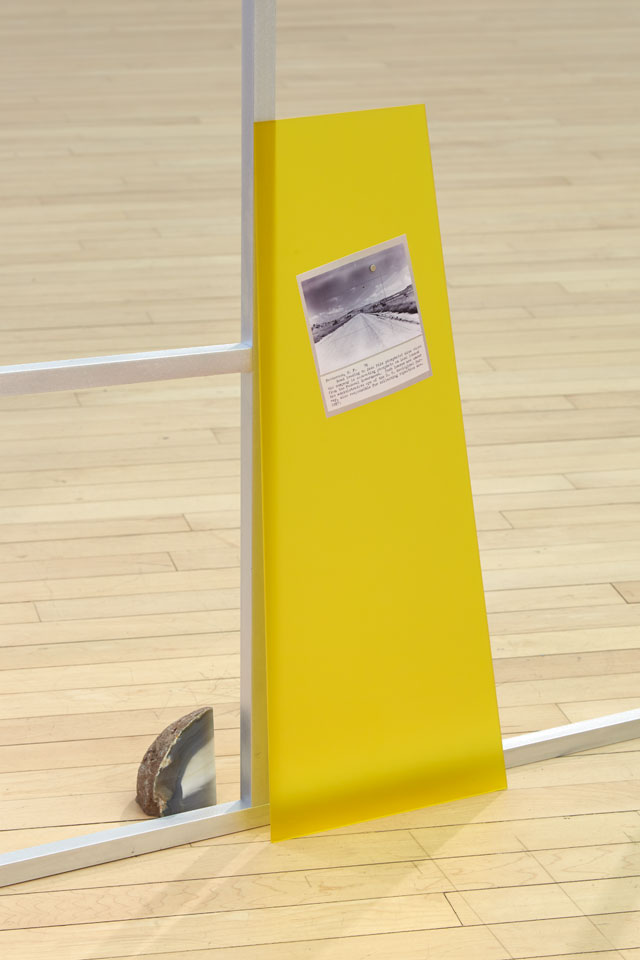 The exhibition itself is a space of “circulation”, urging viewers to circumnavigate the Systems’ different sides; but, more than that, it conjures a feeling of motion, particularly travelling in a car. Attached to one of the Systems, there is a blurred photograph of a field of sunflowers, which seems to have been taken from the window of a speeding car. The video-sound work 5179 (2017) captures a similar, if also frenetic, sense of movement. A camera performs rapid 90-degree shifts around a forest; the leaves of the trees flutter in the wind, seemingly in time with the loud beating soundtrack, produced from the same data set as the weaving; it is like the deafening noise of air buffeting through an open car window or rubber slapping against a line of cats’ eyes on a motorway. As the camera in 5179 moves with the data-generated audio beat, it fluctuates hopelessly in and out of focus. These instances of malfunction in the exhibition, what might be called “glitches” – like the multicoloured striations on the rugs, reminiscent of when TVs lose transmission – typify what can feel like an overwhelming struggle to keep pace with a world where jets can fly you to any of the planet’s cities within hours and optical fibres can relay information at two-thirds the speed of light. 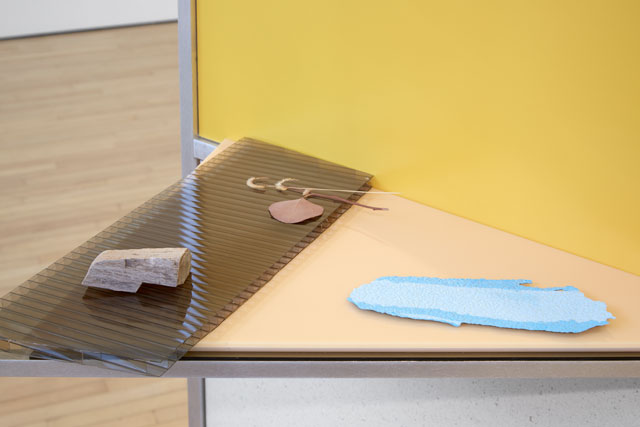 Super-fast connectivity seems to distort our sense of time and place, much like snapping a shot from a moving car blurs a photograph. We hurtle through space, leaving behind little more than hazy, fading memories, offering a parallel to the way tourism and globalisation (and colonialism before that) erases culture and history. The various objects dispersed around the gallery, which Fowler collected while travelling – the geode from California or the cutting of blue grama grass from New Mexico, function as mementos, attempts to retain concrete, if not mental, traces of rapidly changing environs. Here, nature acts a kind memory, while we struggle to stay attuned to what Augé calls a “planetary consciousness”,3 the ever-changing global state of mind.

References
1. In the place of the digital by Oliver Basciano, 2018 (the text Basciano was commissioned to produce for the exhibition nth nature).
2. Non Places: An Introduction to Supermodernity by Marc Augé, published by Verso, 2008, page viii.
3. Ibid, page x.

• To mark the last week of Lilah Fowler’s nth nature, Assembly Point will host a publication launch and performance event on 13 April 2018 at 6-9pm.