I was in Memphis, Tennessee earlier this year to lecture on Charles Rennie Mackintosh and found myself outside the gates of Graceland, the home of Elvis Presley. So, talking about the design icon of Glasgow, Scotland (as one had to describe the place when in the States!), led me to the shrine of what some would say was the greatest rock star of all time. He was also a man who changed America in many different ways, from crossing the lines between blues and country music and liberating young Americans from the restrictions in behaviour left over from the Second World War, to proving that the American dream — namely that someone from the poorest background could make it in the USA — really did exist. For Elvis, this meant becoming one of the most famous men in the world with his own Convair and Lockheed jets.

Now, 26 years after his death, Elvis is $100m a year business, raising many questions about the ownership of a name, an image and even a personal history. And what is now Elvis idolatory — after all, many fans go to Graceland to visit his grave and many have shrines to Elvis in their own homes — has an echo in Glasgow.

Here — after the city ignored Mackintosh following his death in 1928 and, in the early 1970s, even planned to abolish his Public Martyrs and Scotland Street Schools to make way for motorways, and isolate his Queen's Cross Church in the middle of an interchange — there has been a change of heart. Shortage of road building money saved the two schools, while the establishment of the Charles Rennie Mackintosh Society, with its headquarters in the once threatened Queen’s Cross Church, also rescued another Mackintosh building, the Willow Tearooms in Sauchiehall Street, from demolition.

This revival of the tearoom's Room de Luxe, along with new uses for the schools and the church, has been accompanied by the preservation (by the National Trust for Scotland) of Mackintosh’s domestic masterpiece, The Hill House in Helensburgh. More recently, his building for the Glasgow Herald has been converted into The Lighthouse, Scotland's centre for architecture, design and the city. At the same time, much of Mackintosh's furniture has been put back into production by Cassina and some of his cutlery by Sabattini, while his graphics can be seen, sometimes in connection with Mackintosh buildings and products, sometimes not. But there is a downside. Such is Glasgow’s (Scotland’s?) new love of Mackintosh that a whole host of Mackintosh inspired products — clocks, watches, mirrors, coasters, key rings, card cases and jewellery of all kinds — is now on the market. There has been, as the Film Maker, Murray Grigor put it, an outbreak of Mockintosh.

But back to Memphis and Graceland. Here, too, there was a hiatus after Elvis’ death as his estate went into financial decline. This situation was reversed after his widow, Priscilla Presley, visited tourist attractions such as Mount Vernon, Monticello, Biltmore and Hearst's San Simeon, and examined how Disney, and America's National Park Service managed cultural tourism. She then opened Graceland officially to the public in 1982. Before then, Elvis’ father, Vernon, had simply welcomed visitors to the house. But, as Graceland became the centre of what is now a complex, housing Elvis’ cars and planes as well as shops, restaurants, cinemas and the Heartbreak Hotel, so began the business of controlling Elvis’ history and the marketing of his name, image and souvenirs. An attempt was also made — indeed, continues to be made — to control the way in which all these reflections of Elvis’ life are interpreted by his fan clubs.

First to be sanitised was Graceland itself, where much of Elvis’ more outrageous interior decoration — blood-red shag carpets, teardrop lighting, leopard-skin pillows and fake-fur throw rugs — was replaced by the regal blue and white décor that is there today. In the words of Mrs Presley’s collaborator, Jack Soden, ‘We wanted a dignified, super-conservative presentation’.

Next came the sanitisation of his life. This has been achieved by controlling entrance to Graceland; bussing all visitors up the very short drive (an idea taken from San Simeon, where the drive to the mansion is much longer) and initially delivering the history of Elvis and Graceland by specially trained guides, now replaced by audio programmes. Hence, his musical, filmic and philanthropic achievements are underlined and his sexual life, drug addiction and final days are hardly mentioned. Nor, in the official guide, is there any discussion about his role as an icon who, besides drawing upon both black and white American music, also blurred racial and sexual boundaries and, in fact, changed his own image from that of a young, black-suited rock star to a much less radical musician whose white jumpsuits used in his Las Vegas concerts owed much to Liberace.

This very carefully controlled presentation also applies to the souvenirs sold in the shops opposite Graceland. Thus, many of the kinds of memorabilia beloved by Elvis fans, like the black velvet paintings, are nowhere to be seen because, critics believe, Elvis Inc sees them as ‘truck stop paraphernalia’. Instead, the souvenirs are very tasteful and sometimes expensive, like the $12,000 jukeboxes. This determination by Elvis’ estate to control the way he is presented and remembered means its relationship with his fan clubs has been tested to breaking point (especially after the estate insisted on registering them). Thus there are fan clubs that refuse to be corralled in this way (and so are banned from official celebrations); while fans Paul and Elvis MacLeod have set up their own shrine, Graceland Too, in Holly Springs, Mississippi containing every conceivable piece of Elvis memorabilia they can lay their hands on. The place looks a bit like a bordello but they are interested in the complete man (warts and all!).

Just how much Elvis Inc would like to control everything to do with Elvis is described in Erika Doss' book, Elvis Culture: Fans, Faith & Image. She describes the company's legal action (which it lost) against a night club in Houston called Velvet Elvis. Also listed is its action (which was successful) in preventing Joni Mabe in bringing a show based on her Elvis artwork to the Memphis Brooks Museum of Art. But the company lost its court battle in London (England) to prevent Sid Shaw from marketing Elvis memorabilia under his trademark, Elvisly Yours, and Andrea Berman continues to put her Cyber Graceland Tour on her website after lawyers informed her that the doctrine of ‘fair use’ continues online.

Nevertheless, the decision by a Denver gallery, Core New Art Space, to turn a show about Elvis, which opened in 1997, into one on the issue of ownership when Elvis Inc refused to allow the gallery to use his name shows how difficult the situation has now become. The gallery retorted by producing a poster in which Elvis’ eyes were shown as ‘censored’. In California, for example, Civil Code section 990 (the so-called Celebrity Rights Act) grants statutory post-mortem rights lasting 50 years which prohibit the unsanctioned use of the ‘name, voice, signature, photograph or likeness on or in products, merchandise or goods’ of any person. Similar laws have been enacted by 12 other states in the US.

All this, of course, ignores the fact that Elvis himself never ‘owned’ the songs he sang, nor did he exercise any control over his image (though he did, of course, help to shape it). But the action taken by Elvis Inc reflects that taken by the estates of other famous people, including Bela Lugosi, Groucho Marx and Agatha Christie. And it demonstrates just how far big corporations with the money to pay lawyers are prepared to go to protect their ‘ownership’ of a name, an image and a history.

As for Mackintosh, well, apart from the official designs produced by Cassina and Sabattini, all his imitators do is to describe their products as ‘inspired by Mackintosh’. How he would have viewed the appropriation of his motifs is anyone's guess. 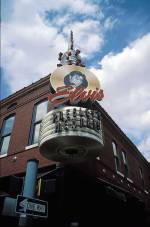 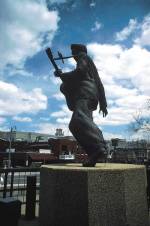