This retrospective of the artist, who died last year, shows the brilliance, courage and impeccable work ethic that made Lamm such an important figure in postwar Russian and American art 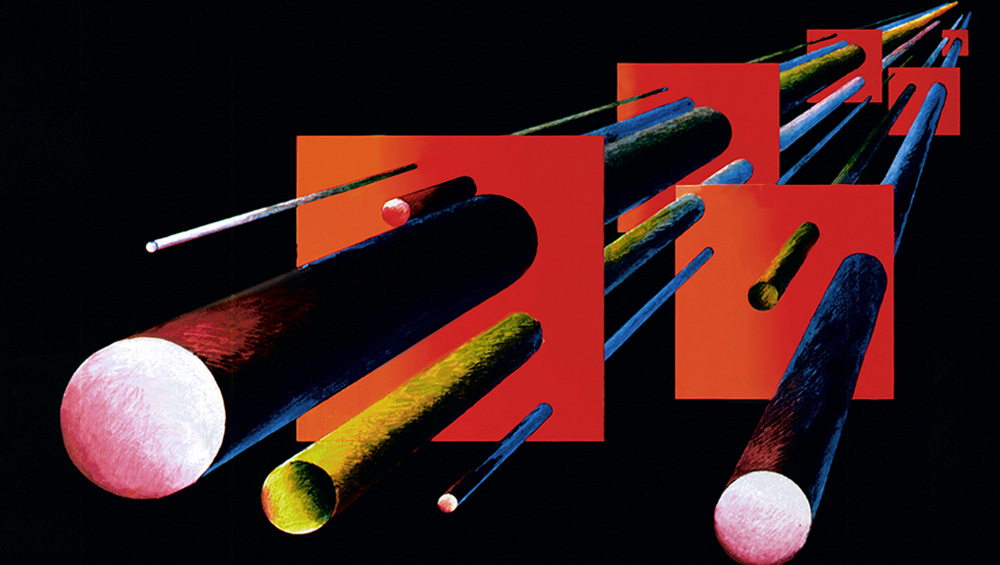 Beat the Flat Red Squares with Cylinders (Dynamics of Perspective), 1955-56. Norton and Nancy Dodge Collection of Nonconformist Art from the Soviet Union at the Zimmerli Art Museum at Rutgers University.

Leonid Lamm’s retrospective exhibition at Zimmerli Art Museum had been planned a as an occasion to mark the artist’s 90th birthday, but opened posthumously, as he died last August. Embracing the period from the mid-1950s to 2017, the exhibition is a remarkable testament to Lamm’s ability to use visual communication as a conceptual tool that integrates various periods of his life in a consistent and comprehensive manner, synthesising influences from the past and infusing them with references to the current life he saw around him.

Organised by Julia Tulovsky, curator of Russian and Soviet non-conformist art at Zimmerli Art Museum, with the help of Innessa Levkova-Lamm, the artist’s widow and an art critic and curator in her own right, the exhibition offers the visitor a systematic view of Lamm’s career path. Its title, Nevermore, refers to the significance of memory for Lamm, for whom the legacy of the Russian avant-garde – specifically the works of Kazimir Malevich, Yakov Chernikhov and Vladimir Tatlin – served as the departure points for his thinking about art. In terms of artistic device, this memory was manifested as constantly renewable repetition, a phantom of sorts, because, as is evident from the exhibition, not only were the aforementioned artists catalysts for Lamm’s thought, but he returned to them time and again throughout his career, representing them in an ever-changing, but immediately recognisable guise. Having established himself as a leading non-conformist artist in the post-second world war Soviet Union, Lamm was forced to emigrate in 1982, having spent three years in a labour camp for his insubordination to Soviet authorities. He decided to go to New York, beginning a new, American, stage of his life and career. Featuring about 50 works from the museum collection and a few from his widow and daughter, the exhibition shows just a fraction of the holdings of Lamm’s works bought from him by Norton Dodge, who donated his collection of Soviet non-conformist art to Zimmerli Art Museum.

The exhibition is organised chronologically. It begins with a series of studies from the mid-50s that were reconstructions of original etudes made by Lamm under Chernikhov’s instruction in the mid-40s – the private lessons with the master were made possible by a coincidence of circumstances, in which the artist’s father’s personal acquaintance with Chernikhov played a significant role. Lamm had to destroy the original drawings for fear of prosecution by Stalinist authorities, but was able to reconstruct them from memory after the political climate in the country softened following the dictator’s death. The studies are either towering constructions of interconnected volumes and planes or forms frozen in flight, so to speak, shown in a way that displays dynamic tension between the parts of the construction in question. 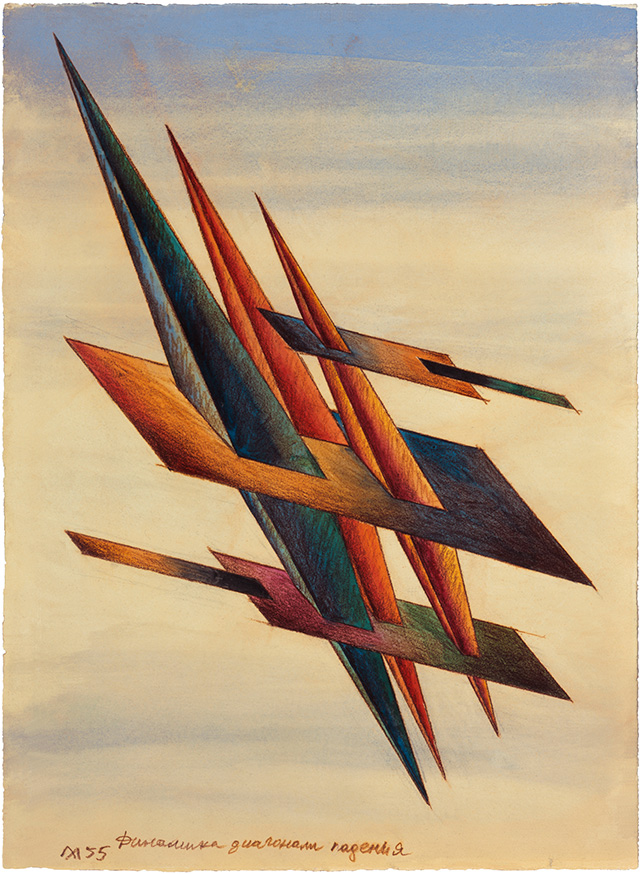 In Dynamic Diagonal Decline (1955), for example, interpenetrating geometrical elements float in a vaguely defined atmosphere. This is not a cosmic or airless space, as there are visible clouds surrounding the suspended constructions with no other clearly defined spatial markers. According to the artist’s widow, it was only after completing several such studies that the artist noticed that his constructions were airborne, while his those of his teacher were standing on firm ground.

A combination of a utopian architectural construction and a vaguely defined atmospheric aura referring to real space makes Dynamic Diagonal Decline look somewhat surreal, very much unlike the bitingly sarcastic Beat the Flat Red Squares with Cylinders (1955-56), in which phallically prominent cylinders penetrate several red squares. The squares here refer to the shape of Malevich’s iconic painting, which, for Lamm, became what he called his “phantom,” a stand-in for the utopia of the avant garde. Symbolically, then, Beat the Flat Red Squares with Cylinders refers to Lamm’s struggle with the legacy of the avant garde: recalling both in title and form a famous work by Malevich’s student El Lissitzky, the artist counteracts suprematist flatness with an exaggerated one-point perspective. The cylinders appear to jut out from the picture plane into the viewer’s space, breaking out of the surface of the work. 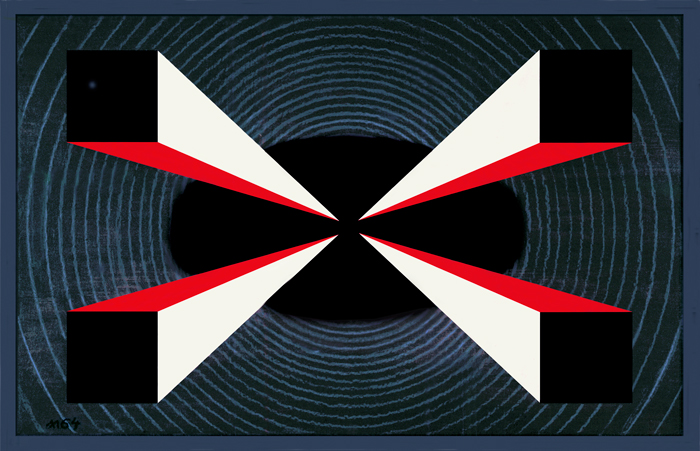 The 60s was a productive decade for Lamm, as he continued blending the illusory space of the picture plane and that of the viewer’s space, with which he had begun experimenting in the 50s. In his painting Energy of Space (1964), for example, he, once again, employed the device of hyperbolic one-point perspective, creating an illusion of pictorial space projecting into the space of the viewer. According to Levkova-Lamm, the work was inspired by the artist watching television. At that time, his family possessed one of the first Soviet TV sets, the KVN-49, which had a small screen and a lens mounted in front to magnify it. The artist liked to watch TV in complete darkness. He noticed that when he turned off the light, the objects in the room disappeared and the energy of the image filled the room, coming out of the TV box. For Lamm, this experience provided a clear example of the failure of visual utopia encapsulated in Malevich’s Black Square because, instead of examining the painting, the viewer found himself sucked inside another kind of black square, the TV box. Levkova-Lamm noted that the ellipses in the painting are very important, because they represent the energy of space, mentioned in the title. They emerge out of the black box and give their own concept and subject to the viewer. 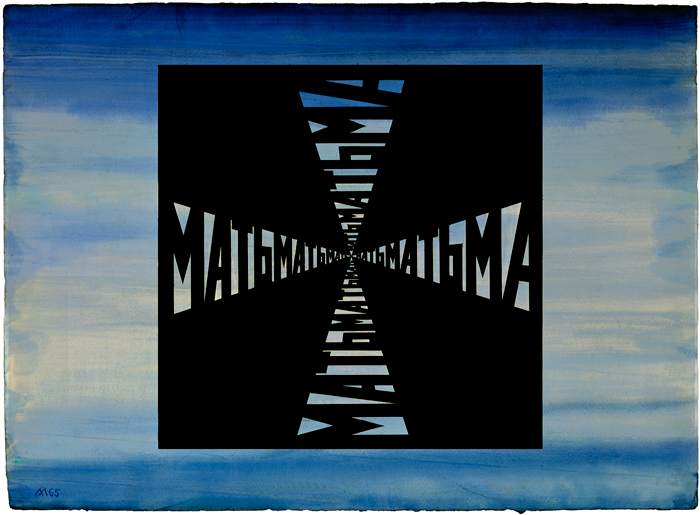 In Mat’ Mat’ Mat’ (Mother Darkness, 1965), Lamm, once again created a work influenced by Malevich’s Black Square. Unlike Malevich, he placed the square against an atmospheric background and broke up its dark plane by perspectival beams, which repeated the Russian word “mat’” (meaning “mother”). When you repeat this word in succession, either in writing or by pronouncing it, it blends into another Russian word, “t’ma” (darkness). Such poetic use of words in painting reflected the influence of Oberiu, a collective of absurdist poets formed in the 20s to counteract the solidifying aesthetic of socialist realism. Inspired by their poetry, Lamm became one of the first non-conformist artists in the Soviet Union to use words in his painting in a systematic way. In Mat’ Mat’ Mat’, Lamm reversed the classical perspective to create an illusion of the work projecting into the viewer’s space as opposed to the illusion of a window opening on to the world. 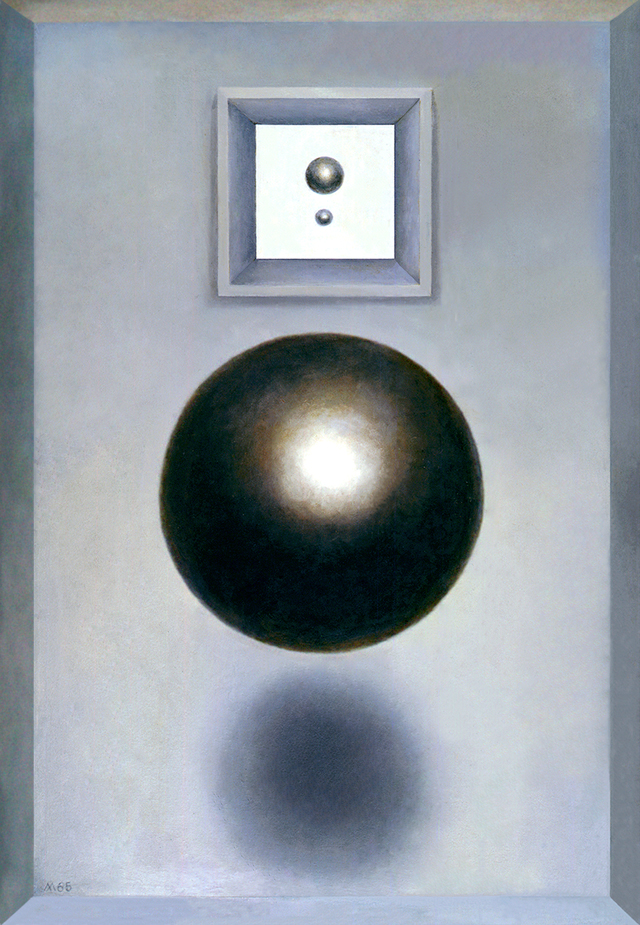 Sphere (1965) is the culmination of Lamm’s efforts in this direction. Standing in front of the painting, the viewer is faced with a ball rolling out of the canvas on to his own surroundings. The artist’s skill makes the solidity and weight of this ball almost tangible. In this painting, the dark shadow emphasises its solidity, while the receding frame above it underscores the reverse perspective used to foreground the main subject/object of the picture – the artist wrote that, in this work, he was able to construct “the multidimensionality of space”.1 Tulovsky suggests that Lamm’s training as an architect in the 40s and then as a book designer in the 50s contributed to his variegated construction of space: he frequently combined different perspectives in a single work. Looking like a cannon ball, this subject/object is threatening to destroy all conventions tied to the notion of utopia in modernism. Apart from the work’s representational elements, Lamm was determined to make the canvas itself an object among other objects. As in many of Lamm’s paintings from the 60s, the frame of this work is constructed in such a way that it makes the painting protrude from the wall, thereby emphasising its object-ness. Apart from such protruding canvases, this section of the exhibition also contains several assemblages made during the 60s, filled with things that literally stick out into the viewer’s space – such as, for example, Venus (1965). 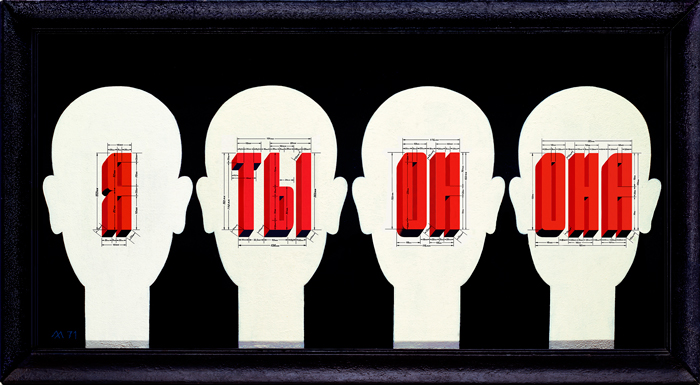 Leonid Lamm. I, You, He, She, 1971. Oil on canvas, 65 x 129 cm. Norton and Nancy Dodge Collection of Nonconformist Art from the Soviet Union at the Zimmerli Art Museum at Rutgers University.

The 70s was a difficult decade for Lamm and his family as Soviet authorities began pursuing him for his contact with dissident writers Yuly Daniel, Alexander Galich and Vladimir Maximov, as well as for his desire to emigrate to the west. Around this time, he began painting works critical of the Soviet system, such as I, You, He, She (1971) in which he introduced numerical notations and measurements to refer ironically to uniformity of Homo Soveticus. This theme of forced uniformity masqueraded as “equality” returned in Lamm’s later works, such as Pyramid (1986-88), for example. The artist was arrested shortly after he applied for his exit visa at the end of 1973 and was sent to a Gulag for three years. While he completed several drawings and created multiple works related to his time in confinement, they are not included in the exhibition, because, as the curator explained, they are the better-known of Lamm’s works. There is only one work on paper on display that refers to his time in prison – Virtual Journey: Back from Home: Kunstkammer (1995). Even though the prison works are not included, it is clear from other works done in the 70s and later that his experience of imprisonment and emigration was a transformative one. After his release he made more abstracted, self-referential works – such as Exodus (Triptych) (1976) or Adam’s Tower (1973-77). There were also works inspired by Judaism, such as Pentateuch (1977), and more references to Malevich, as in the Dynamics of the Red Square (1976). 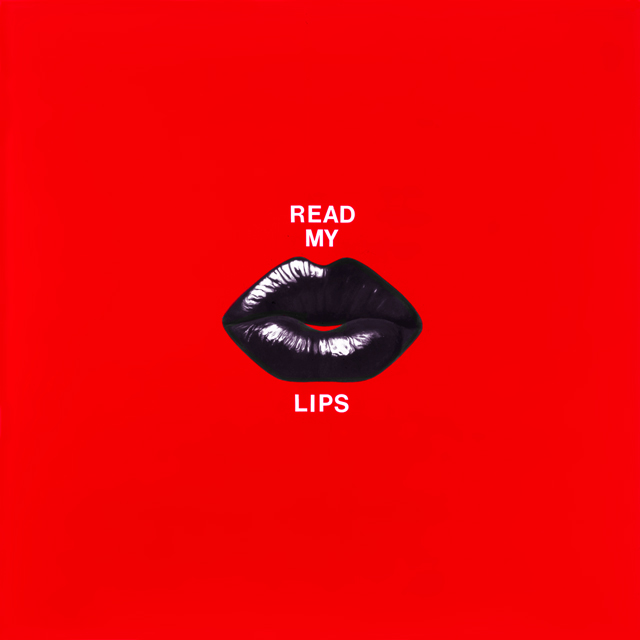 After emigrating to the United States in 1982, the artist settled in New York with his wife and daughter and began creating works influenced by American culture, such as Untitled (Read My Lips) (1990), Token (1991) and Dollar (1991-93).  His attunement to the world around him with its technological hype is manifested in a series of digital collages from the early noughties, in which he experimented with transforming his drawing made in the mid-50s into different stages of “reincarnation”, achieved with the help of the state-of-the-art technology in 2003. The digital prints recall the original drawing in shape, but not in form, which is altered by the use of technological media. Lamm’s experimentation also extended into his collaborations with his wife on three videos and an installation made with his daughter’s work. The curatorial decision to highlight the importance of the artist’s wife and daughter, not only in his life, but also for his creativity, especially during the last years of his life, is touching and appropriate, as it brings the dimension of real life into the show, which is what Lamm’s work is all about. The exhibition succeeds in bringing forth the brilliance, courage and an impeccable work ethic that made Lamm an important figure in postwar Russian and American art. With all his love of invention, his attention to historical memory is something that gives his art stability, grounding it in the tradition of the modernist avant garde. The artist summarised the role this legacy played in his art as follows: “On the one hand, it is difficult or even impossible to understand the present without the experience of historical memory. On the other hand, the known never leads to the unknown if it does not contain an equation. Art or poetic speech always preserves the metaphor, the sign, which, I believe, represent access to the never-tried.”2 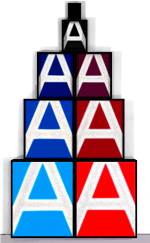 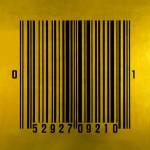 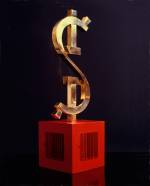