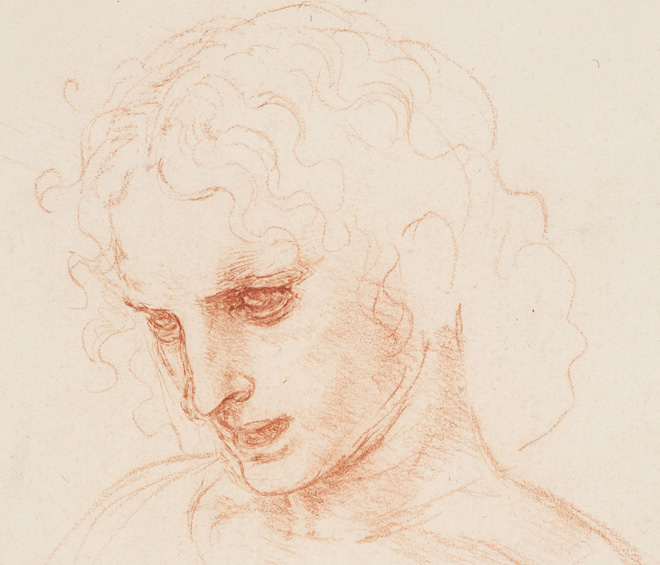 When most of us think of Leonardo da Vinci, we think of the painter, the man responsible for the Mona Lisa and The Last Supper. But the man whose name has become synonymous with the Renaissance only made around 20 paintings. As remarkable as it seems, there is evidence to suggest that he was impatient with a brush and even with the help of a studio of assistants, it regularly took him years to finish what he had started. For Leonardo there was too much going on, too much to investigate and just not enough time. He was, after all, the consummate polymath, good at – and interested in – almost everything.

Leonardo was a respected architect, sculpture, cartographer, musician and engineer (he plotted with Machiavelli to divert the river Arno) and, through his detailed dissections, he knew more about the human body than any of the physicians of the day. But much of what he set out to do was either never completed or is lost to us now, save his thousands of drawings.

The 200 pages on display at the Queen’s Gallery, Buckingham Palace, have been together since the artist’s death. They were bound by the sculptor Pompeo Leoni in about 1590 and entered the Royal Collection during the reign of Charles II. Some of his most iconic images are here, including his study of a foetus in the womb, made as part of a treatise on anatomy that came close to being finished, but was never published.

Leonardo dissected about 30 human bodies, including that of an elderly man at the hospital in Santa Maria Nuova, in the winter of 1507. The man claimed to be more than 100 years old when Leonardo met him and, on seeing him pass away “without any movement or sign of distress”, Leonardo “dissected him to see the cause of so sweet a death”, making detailed studies of his arteries and heart. During such investigations, he recorded organs, muscles, joints, valves, genitals and eyeballs. Everything interested him. Included here is even a (rather awkward) cross-section of a couple having sex.

It might seem incredible that Leonardo was given access to so many bodies, but it is likely that his reputation preceded him. His talents certainly did not go unnoticed. In the 1480s, he entered the service of Ludovico Sforza, the Duke of Milan, becoming a court artist and working on a number of commissions, including The Last Supper, which was completed in about 1498. But when the French invaded the city and toppled Sforza, Leonardo started to receive commissions from the new rulers. He eventually moved to France to live at the court of the young King Francis I, where he designed entertainments. The king reportedly “took such pleasure in hearing [Leonardo] talk that he would only on a few days of the year deprive himself of his company”.

Leonardo’s ability to stay on top, even during the most tumultuous times, may have been in part down to his charisma. Those who knew him described him as gregarious, beautiful and charming and he clearly had the social graces necessary to negotiate difficult situations. A portrait, attributed to his friend and assistant Francesco Melzi, preserves Leonardo’s handsome, bearded profile for posterity. It is thought that Leonardo may even have added some finishing touches to this fine chalk drawing, which shows signs of having been framed and displayed at some point. Melzi – whom we have to thank for collecting and preserving many of his master’s drawings – probably hung the portrait on the wall of his villa and it might even be the same one that the Renaissance biographer Giorgio Vasari references in his Lives of the Artists after paying Melzi a visit.

The drawings selected for this exhibition (there are about 550 in total in the Royal Collection) give an excellent insight into Leonardo’s personality, his enquiring mind, his inventiveness and his sense of fun. To entertain himself, and perhaps others, too, he made a series of satirical grotesques. In these drawings, he subverts his detailed knowledge of proportion to comic effect to poke fun at the elderly and the vain. One such image is a satire on aged lovers. An old woman, with her bodice pulled so tight that her breasts threaten to pop out of the top, strokes the chin of a coy looking man with deep lines on his face. Leonardo even did the same with animals. A longhaired dog with a drooping lower lip occupies the same page as a smaller hound with comically sagging jowls.

Leonardo’s drawings also helped him design compositions for his paintings and provided instruction for his assistants, so they might render certain areas in his paintings. Here, there are studies for the drapery of the The Virgin and Child with St Anne (1508–19), made with chalks and washes. A detailed rendering of the Virgin’s sleeves, with the gossamer fabric gathered along the arm in voluminous creases, is so fine it seems spun from the mists of the mountains behind the holy family in the final painting.

Towards the end of his life, Leonardo suffered from what was most likely a stroke, which, according to one contemporary account, may well have crippled his right arm. But this didn’t stop the left-handed artist from working. In this period, he becomes preoccupied with destruction and apocalyptic floods and his writings at this time focus on man’s futile struggle against the elements.

Perhaps Leonardo was thinking of his own mortality. During his life, he had witnessed invasions, wars and the destruction of his own artistic achievements and, with his health failing, the impermanence of life must have been at the forefront of his mind. But he tackled this subject with characteristic fervour and an acute attention to detail, annotating drawings of doomsday with scientific detachment. Among the final works in this exhibition are tumbling horses, trees bent double, crumbling mountains and even skeletons climbing out of their graves. Floods that rush from the skies with curling throngs of water wreak havoc on the landscapes below.

The last drawing in this exhibition is dated to about the final year of Leonardo’s life. It is a portrait of an elderly man in profile, bearded and with long hair, shaggy eyebrows and pendulous nose. This is not thought to have been a literal self-portrait, but perhaps a representation of age, a drawing to articulate how he felt, if not how he looked. The exaggerated features are similar to his earlier grotesques, but without the biting satire. This is a sympathetic image by a man who now knows what it feels like to be old. And gone is the sure, confident hand of his youth. He redraws this old man’s nose again and again no longer sure of himself. It is a touching image to end on and a fitting conclusion to a fantastic exhibition.