The 150th anniversary of the birth of the Austrian artist Gustav Klimt was the subject both of the exhibition Up Close and Personal at the Leopold Museum, Vienna, and the publication, reviewed here, which accompanied the exhibition

Klimt (1888-1908) is the artist who both led and personified the Secession in Vienna, which occurred in 1886. Klimt just happened to emerge from obscure origins, as the Ringstrasse project of monumental buildings got underway. The timing was perfect for him, and he was duly engaged in historical paintings for both the new Burgtheater and for the Museum of Art History, completed in 1891. He was enabled as a result to establish himself as a painter, becoming publicly renowned and privately, being readily commissioned to undertake portraits. This gave him the opportunity to establish his own private world, and at the same time to build an active network of friends and accomplices, mostly female, young and attractive.

At the same time as establishing a special, lifelong bond with Emilie Flöge, he pursued other female relationships, including of course with the models he found for his work. With Flöge, the friendship was the mainstay of this personal life, through which for the most part he retained his psychological balance of mind, and she hers. Their relationship was epitomised by a continuous series of postcards, which he dashed off in a highly individual manner, whenever the couple was apart as a result of his travels across Europe. It was as if he used a mobile phone or iPad, texting Emilie non-stop. In terms of personal direct contact, the idiosyncratically scribbled card, with just enough room for stamp proved highly acceptable. This was the silvery connective conductor, which seems permanently to have linked the couple together, almost like an umbilical cord (covering his dependency needs) in a curiously modern manner, appropriate for two Secessionists.

The short messages on the cards certainly tell us how essential the system was for Klimt. Dr Wolfgang Fischer, a lifelong scholar of the Secessionist movement, has been instrumental in the development of this publication and exhibition since his discovery of an archive of some 400 cards in 1983, in the estate of Helene Donner, née Klimt. Source material for a “close-up” examination of Klimt's private affairs was always hitherto a problem.

Dr Fischer had previously covered in depth the relationship of Klimt and Flöge in his first major study of 19921, which introduced the phenomenon of the postcards: but there had not been the opportunity to provide this present, full documentation. Subsequently, Dr Fischer set about forensically studying each card, relating them to Klimt's movements, and establishing a full template of his life accordingly. Most of Klimt's written papers were lost in world war two, through conflagration. After many years of forensic research, and decipherment of innumerable items, this archive could be officially photographed and documented. Accordingly, this publication contains the full documentation of all the cards, in an appendix of 102 pages. (The book runs to some 432 pages). The Leopold Museum decided that for the Anniversary exhibition, all the cards would be exhibited along with other Klimt works, photographs, memorabilia, and paintings and drawings. The cards became the filament, which could run connectively through the exhibition. This was clearly a curatorial decision of the highest order, and the Leopold are to be congratulated for their discretion and foresight.

A key part of this book accordingly is an extended, highly informative essay by Wolfgang Fischer which explores via these original cards the many facets of Klimt's life which have tended to escape Klimt scholars until now. It gives an insight too in how Klimt and Flöge spent their summer holidays, usually on the Austrian Lake Attersee. Fischer has also been further interested to consider Klimt's personality in a Freudian way, seeking a psychopathological approach: could Klimt's libido be divided into four separate fields? Only the new depths of analysis explored by the authors of this book can demonstrate this. Other articles of length consider Klimt's own photographs, and the close detail of his studios, places in the manner of the traditional planted “hortus conclusus”. This new work is, in final published form, wholly in context and must now become an indispensible addition to Klimt studies, and indeed, of the whole Secessionist Movement. 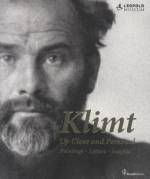