Kevork Mourad: the making of Seeing Through Babel

Kevork Mourad: the making of Seeing Through Babel

We visited Mourad at the Ismaili Centre in London to witness the creation of his latest work, a six-metre hanging sculpture. He explains the ideas behind it and the techniques he uses

In his latest work, the Syrian-Armenian artist Kevork Mourad explores the Old Testament story of Babel, in which God created multiple languages as a punishment to prevent people from communicating with one another. Seeing Through Babel, which employs Mourad’s trademark techniques – monotypes and drawing on to the surface of the work – is a six-metre hanging sculpture, designed to allow visitors to walk around it, allowing closer consideration of its themes. It is now on show at the Ismaili Centre in London. 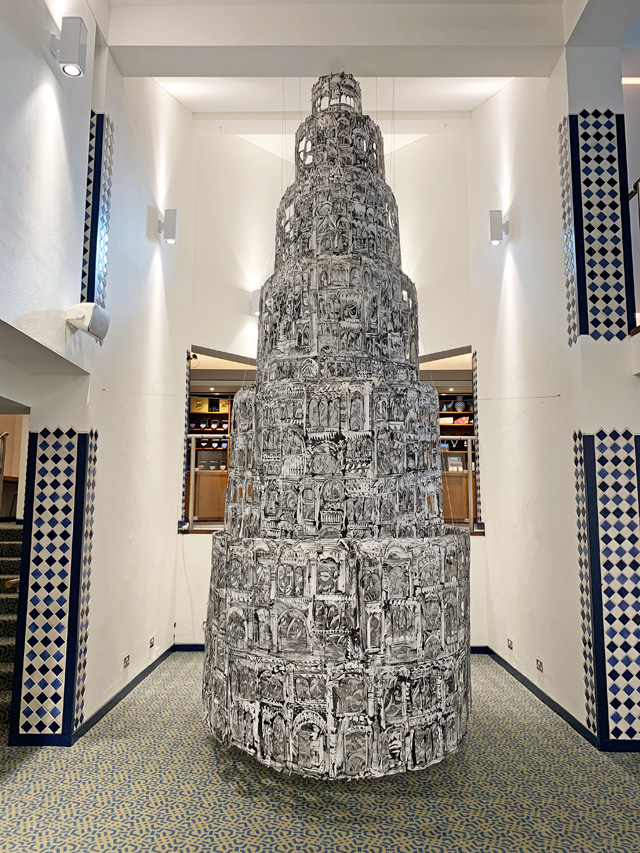 The finished work, though, is only part of the story. Making art in public is an integral part of Mourad’s practice, so Studio International visited him at the centre, while the sculpture was in progress and visitors could come to watch him in action. He talked us through his idea for the work and the process of making it. 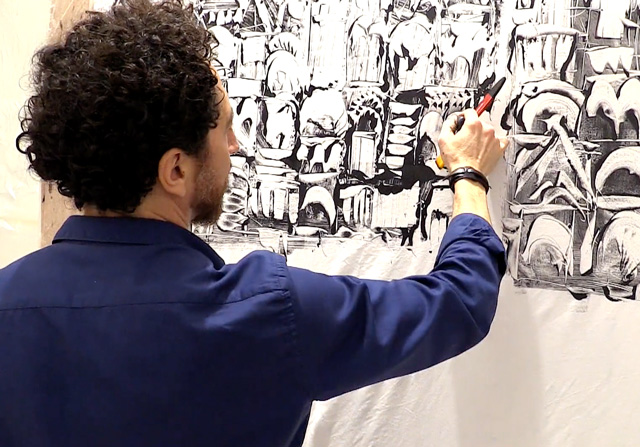 In the biblical story, God cursed the people who were trying to build a tower to reach him, explains Mourad. “Whatever language they were speaking, all of a sudden, they couldn’t communicate. I’m an optimistic person and I decided to take the curse and make a blessing out of it.” Maybe, he says, that was the beginning of diversity. “From that moment on, we blossomed and we have this incredible wealth of civilisations.” Mourad decided to build his own tower, with the idea of creating something that brings everyone together, a mirror into which we can all look and see something of ourselves.

The tower is built in six layers, a visible part and the other layers hidden behind it. The visible part is the facade, behind which are the writings and symbolism, which can be seen through the cut-out doors and windows in the tower. When he is creating, Mourad explains, he thinks about various languages. “In my mind, I’m doing this gibberish talk and writing, but everything is reversed because it is monotype.”

His aim, he says, is to show different languages, faiths and cultures. “The entire structure is about diversity.” He wants the building to be similar to Aleppo where he grew up. “I would love to create the facade of the buildings from my memory, a bit chaotic – different temples, churches, synagogues, mosques, homes, all on top of one another. But at the same time I want to give a sense of beauty and culture.” 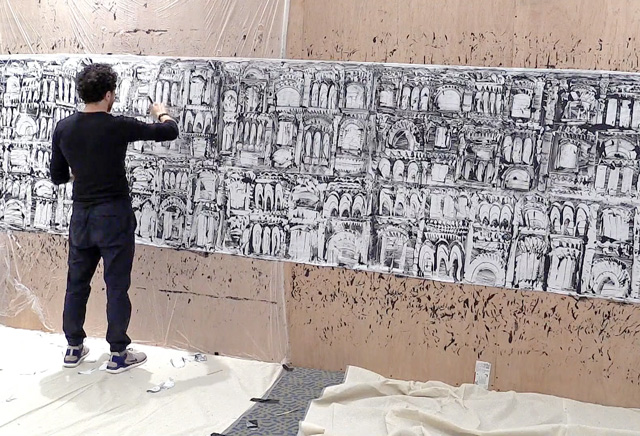 As we speak, Mourad continues his intricate drawings on to acetate in black water-based natural pigment. This is then pressed on to white Egyptian cotton. Finally, he draws over them, without which, he says, “the piece will stay half done”.

While he works, his assistants sit at a long table, painstakingly scissoring out the windows and doors in the fabric that will eventually reveal the core of the tower, the hidden writing beneath.

‘This is probably the biggest project I have ever done in my life,” he admits. “I am curious to see the result.” 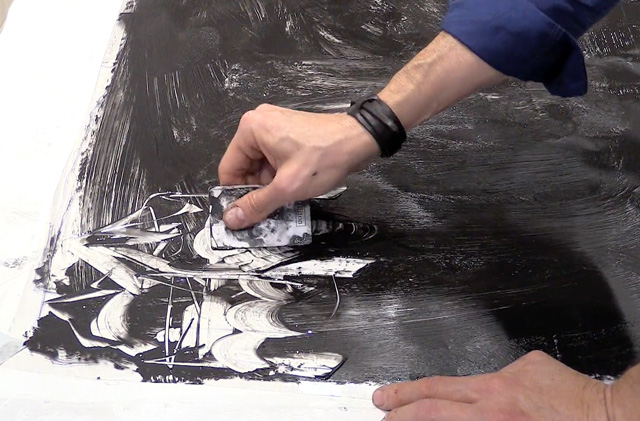 Mourad was born in 1970 in Syria and now lives and works in New York City. He has a master’s in fine arts from the Yerevan Institute of Fine Arts in Armenia. A painter and video artist, he has performed animated and live visuals around the world. His animated short film Four Arts for Syria premiered this year at the Stuttgart Festival of Animated Film.

He has performed at the Brooklyn Museum, the Art Institute of Chicago, the American Museum of Natural History, the Prince Claus Awards Ceremony at the Dutch Royal Palace and in a commission of Handel’s Israel in Egypt by the Los Angeles Master Chorale at the Walt Disney Concert Hall. In 2018, he was commissioned to create a full-length performance to accompany Armenia! at the Metropolitan Museum of Art. 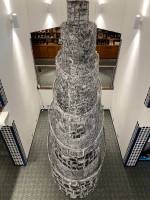