Restricting herself to the abstract and the monochrome, referencing Ad Reinhardt, Mark Rothko and Barnett Newman, and setting rules for the sale of her work, Schneider questions the central relationships in art – between artist and antecedent, gallerist and buyer 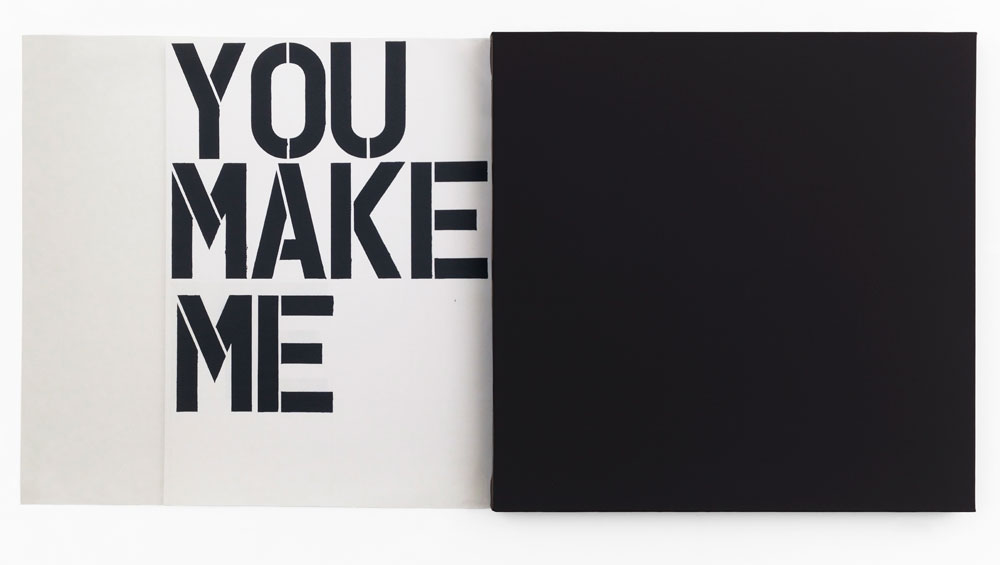 Monochromeis a word that comes easily when describing Karin Schneider’s latest exhibition, Situational Diagram, on show at New York’s Dominique Lévy gallery. Across two floors of gallery space, black cuboid paintings are placed according to a mysterious precision within the gleaming white rooms. But what this exhibition is more concerned with is monochroming, the process of becoming monochrome, or of being nearly monochrome.

On the gallery’s third floor hang two sets of small, black, square paintings, titled Index 1 and Index 2. Against the stark white walls, they appear uniformly black. Yet, on closer inspection, they are revealed to display near-black variant colours, which are used in the other paintings on show: starting with a base of mars black, Schneider has blended in cobalt blue, cadmium yellow, cadmium red, phthalo emerald, turpentine, coal and a derivative of petroleum. As she states in the exhibition guide, this process of reducing colour “allows for the creation of complex diagrammatic relations that are not necessarily determined by fixed operations, but by infinite modulations”.

Situational Diagram is a demanding exhibition, steeped in academic rigour: Schneider initially presented the work as a text at the Centre Culturel International de Cerisy, France, in 2015. As a result, there are plenty of opportunities for visitors to lose themselves in smoke and mirrors, but the core goals of this collection of pieces are deceptively simple. For Schneider, restricting herself to the abstract and the monochrome are means by which central relationships in art – between artist and antecedent, gallerist and buyer – can be exposed and questioned. It is not by coincidence that the artworks on show are named after the processes they are intended to evoke: Split(ting), Extraction, Cancellation, Naming.

These are familiar preoccupations for Schneider: born in Brazil in 1970, the New York-based artist and film-maker has had an extensive multidisciplinary career, bridging the divides between film, painting, sculpture, critical theory and social politics. She was a founding member of Orchard, a cooperatively run exhibition and social space in operation from 2005-8, and, in 2010, she co-founded Cage, a space designed to facilitate new kinds of social interactions between activists, anarchists, writers and artists.

Situational Diagram is centred around a large-scale installation on the gallery’s second floor. It is a “trisected square” steel structure – that is, a square divided up into nine smaller squares. Sixteen monochrome paintings are mounted on to this frame, each a unique combination of the colours presented in Index upstairs. These works are in reference to the black-on-black square paintings of Ad Reinhardt, a selection of which, alongside paintings by Mark Rothko and Barnett Newman, are currently on show as part of the Royal Academy’s Abstract Expressionism exhibition (until 2 January 2017).

Schneider makes no secret of her dialogue with these inspirations: on the contrary, these artists’ initials are placed within a diagrammatic web included with the exhibition press release. Void, a large black, three-dimensional rectangle on the floor, alludes to the black paintings of the Rothko Chapel in Houston, Texas, while Splits, two pairs of thin black rectangles leaning against the wall, reference Newman’s Onement I (1948), a monochrome canvas divided by a strong vertical line, and his Stations of the Cross (1958-66), a set of 14 white paintings split by black lines of varying thickness, which can be viewed in any configuration. Cancellation is one of the few figurative works on display: a reproduction of a painting by Brazilian avant-garde painter Tarsila do Amaral, titled Abaporu (1928), depicts a man, the sun and a cactus. This work has been painted over with the black pigments from Index, again in reference to Reinhardt’s style of using blackness as negation. Two neoprene Extractions, two-dimensional female figures “extracted” from Henri Matisse’s Nu Bleu III (1952), lie placed, or discarded, on the gallery floor.

Three Naming paintings are hung together in a small room on the third floor, Schneider’s most overtly political works on show. Within each black-on-black painting, three letters are barely visible: POL, SRB and SYR. These abbreviations for Poland, Serbia and Syria, each a location of political unrest and violence in recent years, are triangulated around an art magazine placed in the centre of the room, open at a picture of a child in a refugee camp. These works are effective in illustrating the interconnectedness of distant events and disparate contexts, but more solid meanings are elusive.

One of the most intriguing aspects of Situational Diagram is the unique purchase agreements established for each artwork on show. For example, would-be buyers of the Split artworks will be disappointed to hear that they can only purchase one of a pair: these works are never to be reunited once the exhibition closes. Once sold, each of the 16 paintings in the trisected square structure is destined to be painted over by another artist, whose identity is unknown to the purchaser. These conditions constitute Scheider reaching for control in areas where the artist previously had none, creating new economic models for creating and sharing artistic value. While it is common for works post-show not to be reunited for a long time, the contractual certainty of the fact here grants the exhibition a charged temporality.

Situational Diagram presents visitors with a complex web of relationships which lie at the heart of what it means to produce, present and purchase art. We are asked to ponder what being influenced by predecessors means to our concepts of authorship, and how playing with the mechanisms of the commercial gallery space can affect the potential values and meanings of the work itself. This sparse and enigmatic exhibition is never light on ideas, but they are not given up easily.