With 62 of Kandinsky’s paintings and works on paper, this exhibition charts the development of his style as he attempted to free painting from its ties to the natural world 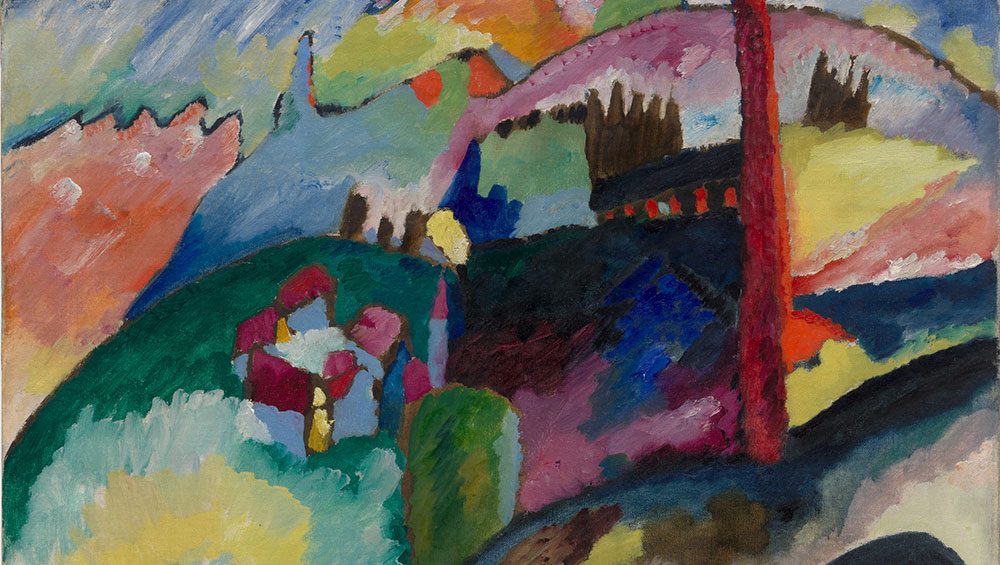 In 1891, Wassily Kandinsky (1866-1944) famously encountered Monet’s Haystacks at an exhibition of French painting in Moscow. It was a revelation that gave him, about 20 years later, the impetus to paint an entirely abstract canvas. Spread across three galleries at Guggenheim Bilbao, this wide-ranging survey of Kandinsky’s paintings and works on paper charts the fascinating development of his style as he attempted to free painting from its ties to the natural world – from the lively figuration of his early expressionistic landscapes to the radical abstract language of the non-objective canvases that earned him the reputation as the father of abstract painting. 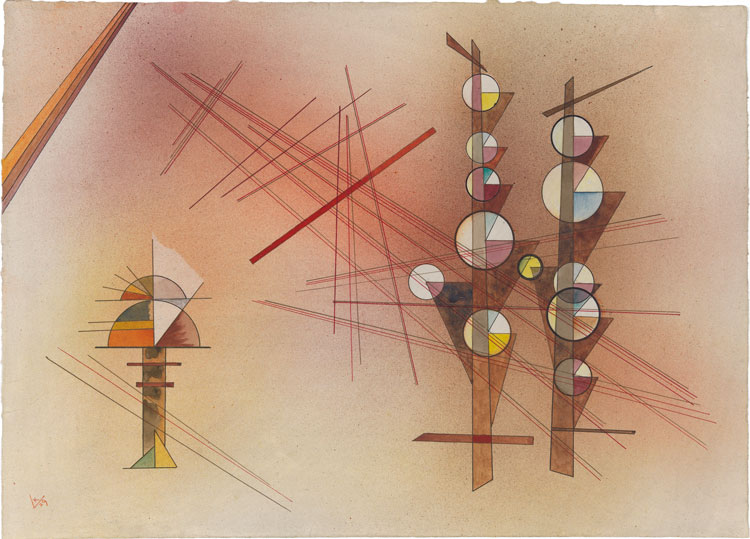 Few institutions are better positioned to mount such an exhibition than the Guggenheim Foundation, the extraordinary Kandinsky holdings of which are among the best in the world. It was with great enthusiasm that its founder, Solomon R Guggenheim, began collecting the artist’s works in the late 20s, even travelling to Europe to meet him at the Dessau Bauhaus in 1930. Today, Guggenheim’s collection boasts more than 150 Kandinskys, of which 62 are on view in Bilbao, illustrating the rich trajectory of his influential career. The chronological selection begins with his expressive works created in Munich before moving to the geometrically rigorous compositions from his time in post-revolutionary Russia and at the Bauhaus in Germany. A final section focuses on his last years in Paris, where his artistic vocabulary had again evolved to include biomorphic forms and a subtler palette of pastel hues. 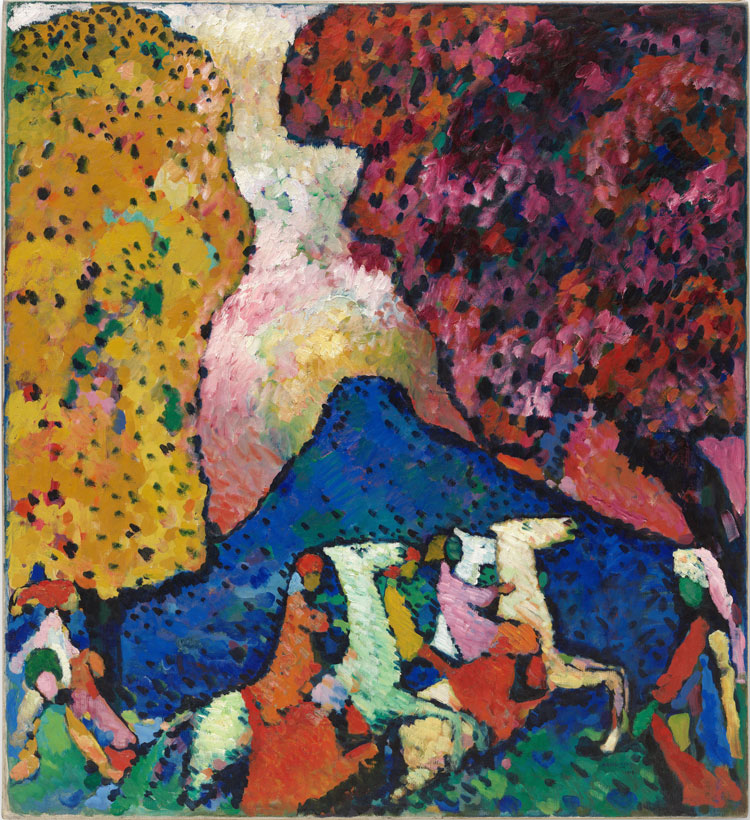 Kandinsky arrived in Munich from his native Russia in 1896. At that time, the city was an international nexus for avant-garde art and it was here, after graduating from the Munich Academy of Art in 1900, that he explored various styles, ranging from traditional realism to modern techniques. The show opens with Blue Mountain (1908-09), a dynamic canvas depicting horse riders galloping through a landscape at the foot of a large mountain. Its bold palette and expressive style typify his work of this period, which was already becoming increasingly abstract. The horse and rider motif symbolised his crusade for a new art that would break away from conventional aesthetics. It appeared frequently in his works and was used for the cover design for his seminal theoretical text On the Spiritual in Art (1911). It can also be linked to his interest in apocalyptic themes, his riders alluding to the four Horsemen of the Apocalypse from the Book of Revelation, who represent conquest, war, famine and death. Such themes are seen in the abstract, schematised composition Improvisation 28 (1912), which depicts a small boat dwarfed by a large wave suggestive of a global deluge. This and similar works indicate that Kandinsky was well aware of the impending chaos about to engulf Europe as war loomed. Yet, an embracing couple towards the righthand side of the canvas offer a hopeful note, pointing to his belief in the transformative power of art. 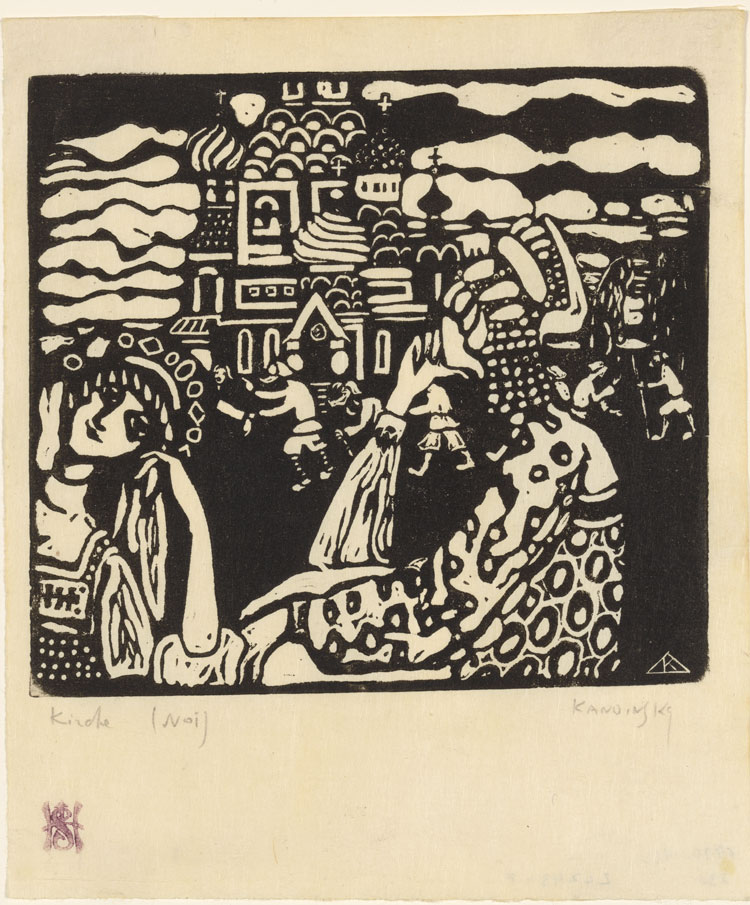 In addition to painting, Kandinsky was a keen printmaker, and works on paper punctuate the exhibition at regular intervals. His early woodcuts, such as the small print Church (1907), feature women dressed in traditional Russian peasant costumes. These compositions signal his longing for the Old Russia of his imagination, an idealised, fairytale land of peace, harmony and spiritual fulfilment. Here, foreground and background seem to collapse with figures and buildings merging into one another. The influence of printmaking is also seen in some of his paintings. Take for instance the small oil Landscape Near Murnau With Locomotive (1909) with its delineated forms and flattened perspective. 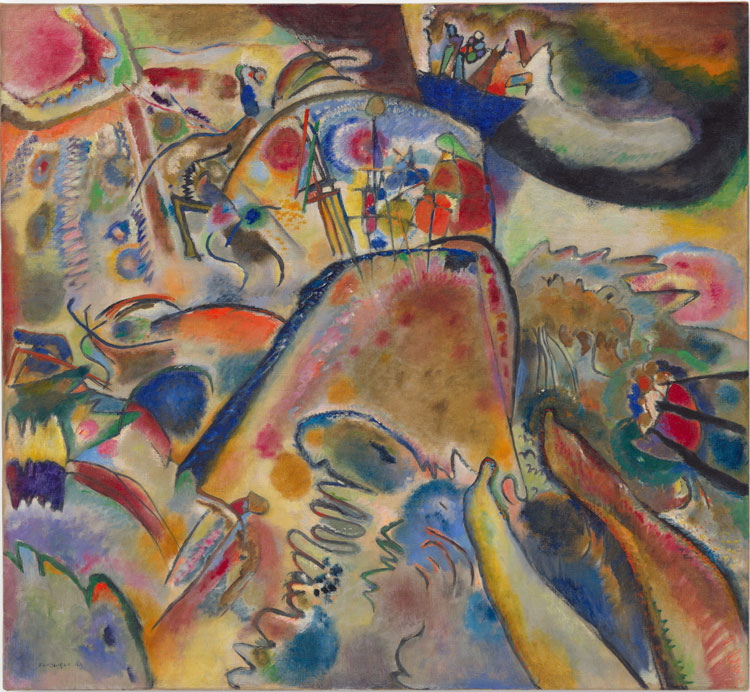 By 1913, Kandinsky’s recurrent subjects, such as the horse and rider, towers and rolling landscapes, were becoming increasingly subordinate to line and colour. His canvas Small Pleasures (1913) features dynamic linear contours and rhythmic forms that contain few traces of its figurative origins. 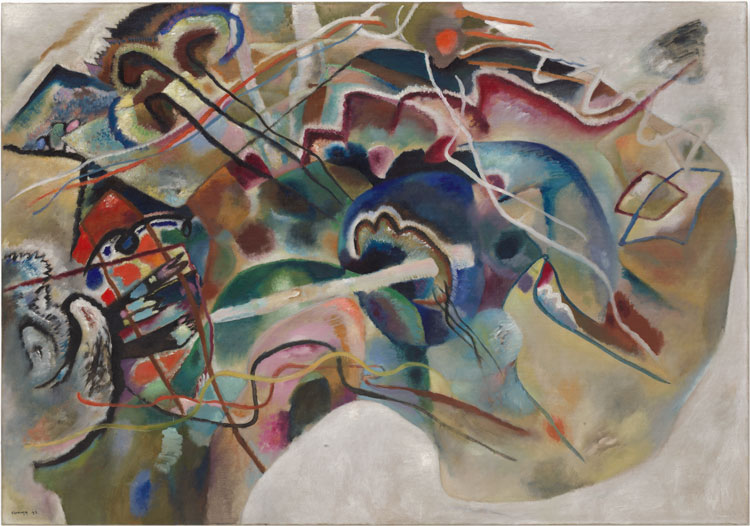 In the second gallery, the exuberant imagery of Painting with White Border (1913) is even closer to pure abstraction. Figurative elements are still present (in this case, a lance wielding Saint George on a charging horse), but they are extremely abbreviated, concealed amid swirling colours and lines. A particular highlight is Black Lines (1913), one of Kandinsky’s first truly non-objective paintings, in which an array of floating coloured ovals and lively brushstrokes interact to produce effects of spatial depth. This painting was one of Solomon R Guggenheim’s first purchases and reflects the artist’s aesthetic theories, which by this point were well developed. 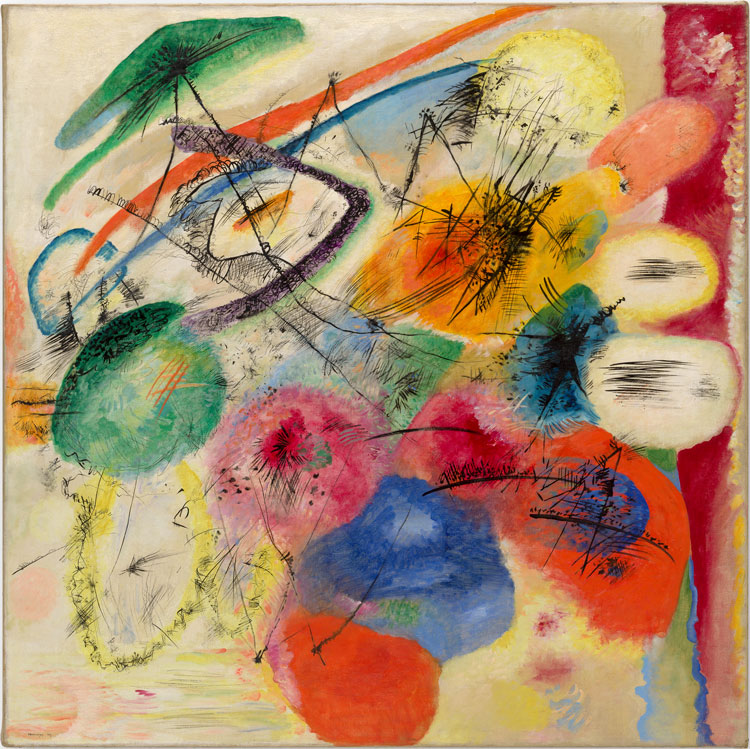 Following the outbreak of war in 1914, Kandinsky was forced to leave Germany. Returning to Russia, he focused primarily on watercolours, prints and preparatory studies for paintings. While dislocated from developments in western Europe, his style underwent a series of modifications that reflected the influence of constructivist and suprematist artists. Inspired by the works of fellow Russians Kazimir Malevich and Aleksandr Rodchenko, he expanded his abstract vocabulary with an emphasis on colourful geometric forms as seen in Composition 8 (1923), which he counted among his masterworks. 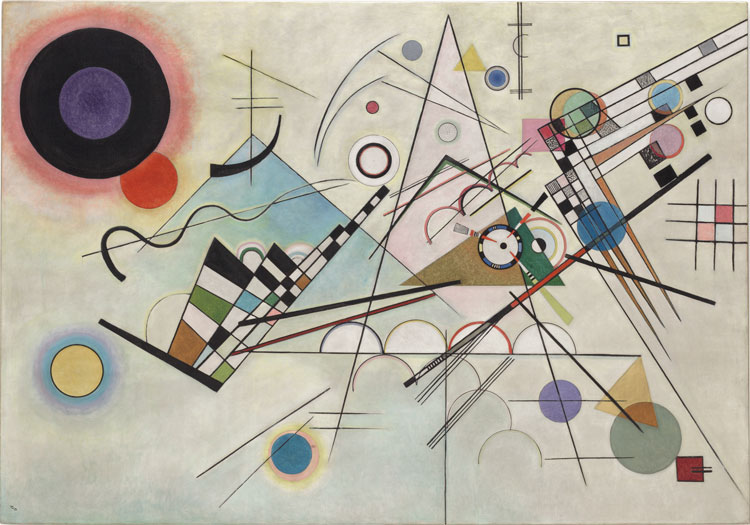 Returning to Germany after the war, he took a teaching position at the Weimar Bauhaus, but had to leave the country again in 1933 when the school was closed by the Nazis. He spent his last years in France, near Paris, and paintings such as Dominant Curve (1936) and Around the Circle (1940) show how he fused surrealist imagery evoking the world of dreams with biomorphic forms derived from the natural sciences. With the second world war came shortages of materials and Kandinsky was forced to work on small boards, of which several are included here. These last works, made in the year before his death, are sombre in comparison to the pastel hues of his 1930s paintings, their darker palettes echoing the mood of a world once again in turmoil. 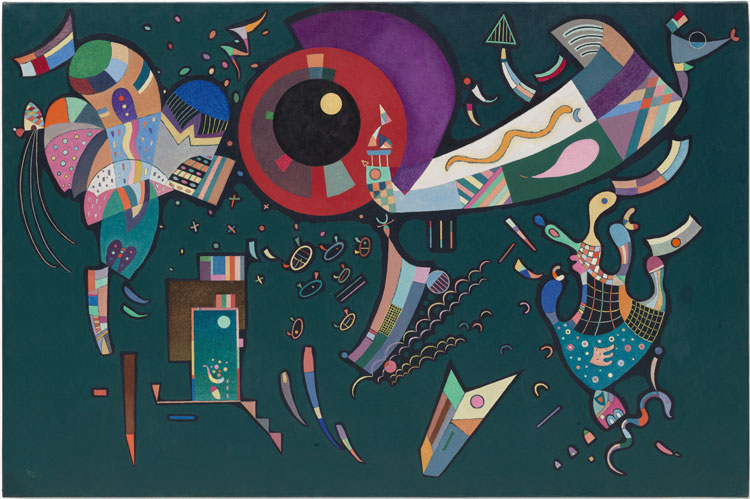 Staging such an exhibition during a global pandemic is no mean feat and the Guggenheim should be applauded for its achievement. Granted, the works are sourced from its own collection, but shipping them from New York and installing them under Covid restrictions still represented a logistical challenge. Those restrictions, which at the time of writing are still in force across much of Europe, will no doubt have an impact on visitor numbers. With that in mind, it was pleasing to learn that the museum is offering a virtual exhibition guide on its website [click here]. But, while the online text, images and brief video tour from the show’s curator Megan Fontanella are welcome, it feels like a missed opportunity. Given that other, smaller galleries have produced much more impressive and indepth interactive experiences using Matterport and other digital technologies, it is a shame that Guggenheim is not leading the way here.

While this exhibition is superbly presented and demonstrates with clarity the aesthetic evolution of one of the early 20th century’s foremost artistic innovators, it offers no fresh interpretations of his life and work. Indeed, with just 62 works on display, it feels fairly modest when compared with the expansive 100-work retrospective organised by the Pompidou that toured to Madrid’s CentroCentro in 2016. That show appeared in the wake of other important surveys, such as the significant 2008 exhibition Kandinsky: Absolut. Abstrakt at the Lenbachhaus, Munich. However, what this present exhibition does so well is to demonstrate Guggenheim’s brilliant foresight and rigorous approach to collecting. The wealthy businessman collected in depth, ensuring that he owned major works from each stage of Kandinsky’s development. Indeed, it is his discerning eye that really shapes this show. 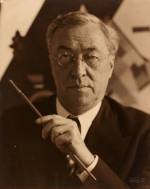 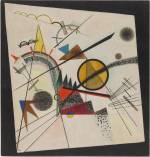 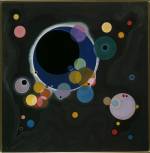